Lorde on London, ‘The Hunger Games’ and why she’s still underestimated

Teenagers these days, eh? When they’re not roaming the streets terrifying Daily Mail readers they’re indulging twisted fantasies through social media, or just playing computer games in their pants. Or, maybe not. Perhaps teenagers are all right. Perhaps – like Ella Yelich-O’Connor – they’re smart, tender-hearted and ambitious.

Kiwi superstar Lorde (as Ella’s known to her fans) is doing a lot for the idea that teenage pop doesn’t have to be juvenile, and that teenagers themselves aren’t necessarily aggressive or sexualised or idiotic. Take ‘Royals’, for example, the minimalist, beat-driven, anti-bling anthem which made her a star. It’s about as clever and honest as a global chart-topper gets. Meanwhile her savvy, unfussed take on being a pop star means she’s happy to goad Justin’s Beliebers, or politely decline a Katy Perry tour support slot. Already, Lorde has marked herself out as a young woman worth listening to.

On last year’s debut album, ‘Pure Heroine’, she told tales of hometown blues. Now she’s taken that melancholy to the world, most recently by curating the soundtrack to teen-angst parable ‘The Hunger Games: Mockingjay – Part 1’. For many, that’s not enough: ‘My fans are like, “When can we expect the new album?”’ she tells me from her family home in Devonport, New Zealand. ‘Shit, I don’t know!’ It’s the eve of her eighteenth birthday, so we can forgive this still-rising star for not having all the answers.

What’s on your birthday wishlist?
‘Kind of nothing. I’ve just told everyone not to worry about it. It sounds douchey, but if I want something I’m lucky to be in a position to get it for myself. I don’t want my little brother spending his pocket money on me, so it’s just, “Draw me a picture or something.”’

When I turned 18 I had what’s known as a dirty pint and fell in a bin. What are you planning?
[Laughs] ‘I think I’m just having dinner at home with my family: it’s so boring.’

Obviously I’ve just brought your age up, but do you think people obsess over it too much?
‘I think when I started doing this, I was just being a bit of a dick. I obviously thought it was cool that I was the age I was [Lorde finished her first EP at 16]. But at the same time I was like, “Don’t talk about my age!” The music is so teenage in content and in feel that it would be wrong to take that away from it. I do roll my eyes when people think I’m not capable of something just because I’m a young person. With “The Hunger Games” soundtrack, a lot of people were asking, “Can she get it done? Will she be able to remember to reply to our emails?” I was like, “Are you kidding? I can send an email.”’

You say you grew up in a ‘bubble’. Now you’ve had global Number Ones and you’re hanging out with Kanye. How have you not gone completely mad?
‘Well, I don’t think about that stuff all the time. I’d go crazy if I woke up every morning and reinforced those ideas. But I live at home: I’m in my childhood bedroom right now. I travel with my mum and if I were ever to say anything a little bit diva-esque, she’d knock it right down.

‘It’s important to me that I’m still in touch with [my teenage life], even if what I’m doing every day may not be strictly teenage. So the second  I get home I’m calling up my friends. I love being young and I want to retain that for as long as possible, even if I am like an old lady and working all the time.’

What do your friends make of  your success?
‘They all tease me. We’ll go and get food, and without fail one of them will say, really loud, “Oh my God! Is that Lorde?” It’s so horrible. But they’re great.’

Do you find it annoying that people think you’re this miserable witchy goth who never smiles?
‘I find it really funny because  I definitely cultivate it. I don’t think  I look good smiling, so I don’t smile  in photos.’

You’re like Victoria Beckham!
‘Well exactly, and she’s fierce. I sent a tweet saying, “People keep asking me what I will be for Halloween, and my answer is that I am Halloween.”  I was very proud of that.’

Do people go to Halloween parties as you?
‘I saw one couple who’d dressed as me and my boyfriend – who’s a photographer – and they had his type of camera and everything.  That was pretty rad.’

‘South Park’ recently featured you as a moustachioed man in drag. Did you see it?
‘I actually thought it was amazing. I’ve never really seen “South Park”, but I watched that episode and they used me to make this point about being yourself. It was all tied into the theme of transgender acceptance and I was pleasantly surprised by how lovely it was.’

With the success of ‘Pure Heroine’ do you feel like you’ve changed the way pop sounds nowadays?
‘When I first started writing as Lorde, pop was going through this really maximalist phase and I was thinking: No, this isn’t where it needs to be, this is where it needs to be. I had a really clear idea of what I thought was missing from the pop landscape. The first couple of times I heard things that had been influenced by “Pure Heroine” I thought maybe it was a fluke, but then I realised there had a been a bit of change. You couldn’t ask for more as an artist.’

Have you started thinking about album number two yet?
‘Not really. This is my second day off since we finished the Pure Heroine tour, then I’ve got “The Hunger Games” premiere in London.’

Do you like London?
‘London is my favourite place in the world; I want to live there so bad.  I like getting the tube.’

No one else in London likes getting the tube.
[Laughs] ‘We don’t do it in New Zealand. We have these trains, though, which attract a very specific kind of weirdo. The last time I got the train I sat next to a lady who started chugging from a bottle of oil. I never want to get the train again.’ 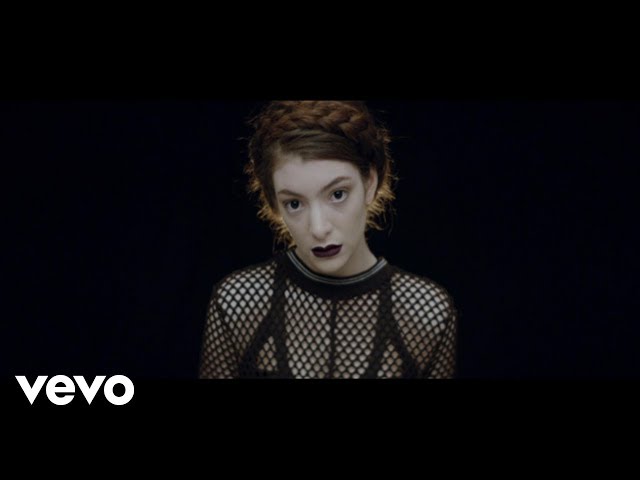