This is a must for art fans and an essential part of Madrid's Art Triangle, together with the Prado and Thyssen-Bornemisza museums. Occupying an immense, slab-sided building, the Reina Sofía boasts an impressive façade with glass and steel lift-shafts, designed by British architect Ian Ritchie. Nowadays, the museum is just as impressive from the back, with three buildings, principally built of glass and steel, arranged around a courtyard and all covered by a triangular, zinc-and-aluminium roof, the work of French architect Jean Nouvel. This ambitious extension project adds almost 30,000 sq m to the already vast art space in the patio to the south-west of the main edifice. It includes temporary exhibition spaces.

The Reina Sofía's great jewel is unquestionably 'Guernica', Picasso's impassioned denunciation of war and fascism, a painting that commemorates the destruction in 1937 of the Basque town of Guernica by German bombers that flew in support of the Francoist forces in the Spanish Civil War. Certain art historians, sometimes encouraged by Picasso himself, have seen it more in formal terms, as a reflection on the history of Western painting using elements from the work of the Old Masters. Picasso refused to allow the painting to be exhibited in Spain under the Franco regime, and it was only in 1981 that it was finally brought to Spain from the Museum of Modern Art in New York. 'Guernica' has hung in the Reina Sofía since 1992, when it was transferred from the Casón del Buen Retiro amid great controversy. The artist had intended the painting to be housed in the Prado – of which the Casón is at least an annex – and his family bitterly opposed the change of location. There is no question that the acquisition of 'Guernica' hugely boosted the prestige of the Reina Sofía, but the conflictive saga of the painting's final resting place has continued: the Basque Country demanded that this famous work be exhibited in the Guggenheim Museum in Bilbao, but their request was turned down by the Reina Sofia Museum following negative reports by the conservation and restoration departments.

The rest of the Reina Sofía's permanent collection, which came mainly from the old Museo Español de Arte Contemporáneo in Moncloa, has been much criticised. For many, the museum's claim to be an international centre for contemporary art is frankly fallacious. At best, it is pointed out, it is a reasonable collection of Spanish contemporary art, with some thin coverage of non-Spanish artists. It certainly contains works by practically all the major Spanish artists of the 20th century – Picasso, Dalí, Miró, Julio González, Tàpies, Alfonso Ponce de León and Antonio Saura are all present – but even here the representation of individual artists is often patchy, with few major works.

In response, an active acquisitions policy adopted in the early 1990s has sought to fill some gaps in the range of Spanish art and to add works by major foreign artists. Pieces by Donald Judd, Anish Kapoor, Bruce Nauman, Tony Cragg, Ellsworth Kelly and Julian Schnabel were all added, along with Picasso's 1928 'Figura'. However, the acquisitions budget has been very tight in recent years, especially in the context of the museum's expansion scheme and that of the Prado, but it has allowed for the addition of works by Miró, Gris, André Breton, Man Ray, Joaquín Torres García and others.

As things stand, the second floor begins with a selection of works that look at the origins of Modernism in Spanish art, haphazardly placing together artistic currents from different parts of Spain – Basque painters such as Zuloaga, Regoyos and Echevarría, Catalan Modernists such as Rusiñol, Nonell and Casas – even though they have relatively little in common. The itinerary continues through surrealism and the period of artistic renewal of the 1920s. Then comes the major draw for most visitors: the Picasso Rooms, divided into pre- and post-Civil War, with 'Guernica' in the centre.

Miró, Julio González and Dalí have rooms of their own. Paintings by Dalí include 'The Great Masturbator' and 'The Enigma of Hitler'. Several of the works by Miró are from his later life, the 1970s. The Spanish Republic (with works by Dora Maar and Julio González), surrealism in exile (with works by Buñuel, Picasso, Maruja Mallo...) and Noucentisme and new art in Spain (with works by Dalí, José Clará...) also have their place here.

On the fourth floor you'll find the second part of the collection which has the title '¿La guerra ha terminado? Arte en un mundo dividido' ('Has the war ended? Art in a divided world'). The fourth floor runs from Spain's post-war years up to the present day, starting with figurative art and the beginnings of abstraction in Spain, taking in Tàpies, Mompó, Oteiza, Palazuelo and Equipo 57. For international context, there are also works by Bacon, Henry Moore and Lucio Fontana, alongside Saura and Chillida. Later rooms feature Pop Art, figurative work by Arroyo and Minimalism, with pieces by Ellsworth Kelly, Dan Flavin and Barnett Newman.

On the ground and first floors of the Nouvel building, the third part of the museum's permanent collection ('From revolt to post-modernism') covers the period from the 1960s to the 1980s and the political, social, cultural and technological changes that have given shape to the contemporary global scenario. Luis Gordillo, Iván Zulueta and Chema Cobo are some of the featured artists, and there are examples of photographs, video art, installations...

Another of the strengths of the Reina Sofía is the fact that it serves as a venue for many other activities, from exhibitions of sculpture and installations organised at the Palacio de Cristal and Palacio de Velázquez (in El Retiro) to the activities and concerts of the Centro para la Difusión de la Música Contemporánea in the modern auditorium of the Nouvel building, as well as film and video cycles, workshops, seminars and conferences. The library is outstanding, and the café-restaurant in the extension area is also well worth a visit. 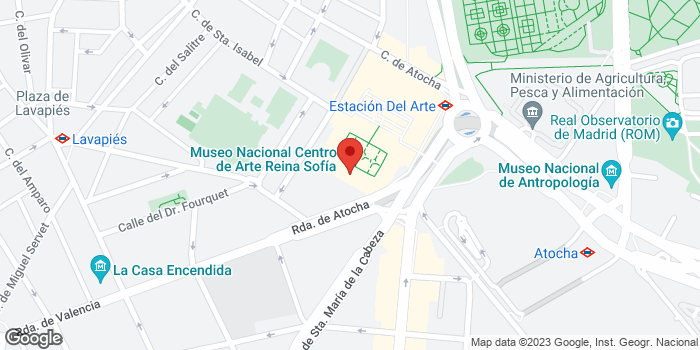