The spirit of curiosity is an endless pour at El Salon, the charming Española Way bar that's concocting its own spirit blends and proferring mean martinis.

When walking down Española Way, you might keep looking around the corner hoping a gypsy will emerge, but perhaps the gypsy you’re looking for is tucked away on a hidden thoroughfare just off of Española; the ghost of flapper icon Louise Brooks reincarnated as the tassel-trimmed, rosewood-hued bar called El Salón.

This isn’t your typical “boom boom” venue with top-shelf brands and theatrical presentations. In fact, you won’t see a brand or a smoke-filled bourbon glass at all. El Salón is a cocktail bar at the Esmé Hotel Miami Beach that creates its very own nuanced spirit blends and cocktails in a setting that belongs not to a time or a place, but to an essence.

“I was a little weary about Española Way as a local,” says Chris Hudnall, co-founder of Lost Boy & Co., the hospitality group behind El Salón. He and partner Randy Alonso are behind some of your other favorite local restaurants and bars, including Lost Boy Dry Goods, Tropezón and soon, Fox’s Sherron Inn. “I had no idea this was even back here. We started going through the renderings and I thought, if this gets done right, this could really be a great reason for locals to come back and appreciate the true charm of Española Way.”

Aesthetically, it’s something like the drawing-room of a Moroccan riad infused with the sultry glamor of an old Hollywood boudoir. Energetically, it's feminine and mysterious without taking itself too seriously. El Salón invites you to satiate your curiosity and try something new.

When we entered the bar at 7pm on a Friday, we were one of three parties seated at the wavy booths that frame the room. By the time we left around midnight, every table in the house was packed with small groups of well-dressed locals and travelers enjoying light bites and post-dinner drinks. It was nice while not seeming pretentious; a perfect place to catch up with old friends before dinner at next-door Tropezón or nearby Time Out Market Miami.

The best seats in the house are at the bar, where head bartender Dave Simmons can tell you the story behind every spirit, give you the rundown on every cocktail and offer create something entirely bespoke for you. If there’s an open space, grab it quickly because these are rightfully the first to go.

The idea for El Salón started with a negroni. Hudnall, at the time Director of Bars for Soho House North America, was visiting Cecconi’s West Hollywood. He noticed bartenders mixing two different kinds of vermouths, imparting their negronis with the oaky, dark cherry flavors from one, and more herbaceous flavors from the other.

A clink of the glass later, and Hudnall had an idea. He let it steep for years and then, when Infinity Collective tapped Lost Boy & Co. to create and manage the food-and-beverage concepts for the Esmé Hotel, he knew he had found a home for his ambitious concept.

The pandemic’s downtime provided the perfect opportunity for Hudnall to turn his bar staff into master blenders. For months, they meticulously sampled every type of spirit imaginable—whiskey, gin, tequila, mezcal, brandy, you name it.

“Take a vodka,” says Hudnall. “Everybody’s perception of it is that it’s very neutral but it’s not. It has a distinct flavor to it. We blended [different brands] to achieve different levels or tiers. We would taste, write our notes, taste the same spirits, write our notes.”

There’s a methodology to the menu and, as such, a recommended way to approach it. That is to say, start with the first page. Spirit categories are broken down into three tiers: Traditional (for two-ingredient drinks like martinis and highballs), Versatile (for citrusy or complex cocktails) and Extraordinary (for neat and on-the-rocks pours).

With that as your baseline, flip forward to pages four and five and allow yourself to be utterly impressed by the 15 categories of spirits on display. If you aren’t lucky enough to be enjoying Dave’s guidance and company at the bar, we’ll suggest this sampling combination to start: something from your go-to category, and then something you might not normally try. The spirit of curiosity is an endless pour at El Salón: This is one bar where sampling is not just allowed, rather it’s encouraged.

With the rise in agave’s popularity, it should come as no surprise that tequila and mezcal are the most popular pours, and the next most obvious choice would come from the five whisky categories. All are blended exquisitely (particularly the Versatile Irish, which tastes like a crisp autumn day) but what will absolutely blow your mind are the Extraordinary Vodka and Extraordinary Gin, two categories that are rarely ever enjoyed straight up.

You wouldn’t believe that vodka could taste so nuanced, fruity and floral, while the gin opens up with flavors akin to a forest in mid-spring. Something in my brain shifted with each sip, and I find myself dreaming about the complex notes in vodkas and gins now more than ever. Another one of El Salón’s unexpected flexes is the Cachaça. With tropical fruit notes, it takes like being awoken gently from a nap by someone you love on a warm beach day. (We’ll let you work out that imagery for yourself.)

At this point, you’re probably ready to throw back some cocktails. El Salón has a whole range of them, beginning with a page dedicated to martinis. Order one dry to really enjoy the complex flavors of the Extraordinary Gin, or try the Rose Vesper, a floral and decidedly feminine adaptation of the James Bond classic made with Lillet Rose. When she arrived at the table in her beautifully designed coupe, my friend gushed, “She’s so pretty!” And indeed she was.

As one might expect, the most popular cocktails are the margarita and a very bright and gingery penicillin. if you’re one to stick to your guns when it comes to drinks then you’ll be extremely happy with these choices. But hey, you’re in Miami, and there’s no better continental city in which to enjoy a rum or tiki cocktail! A Mai Thai anywhere else is likely a miss, but the one here could raise Hemingway from his grave. If you’re feeling fun, make this the first cocktail you order.

You won’t be coming to El Salón for a full meal, but that doesn’t mean you shouldn’t come with an appetite. Small plates here are done impeccably well, designed with locals in mind. What does this mean? There are some pork-heavy Latino dishes like media noche sliders and arepas, both made with soft strands of pulled pork. But it’s the Chicharon 2 Ways that is the one you’ll go home dreaming about, with pieces of succulent guava pork belly that ride on little crispy little pork rinds right into your mouth. The empanadas, too, are a worthy crowd fave.

If you’re craving something lighter for your martinis and neat pours then try the charred lobster tostada or the delightfully citrusy snapper. The roasted beet hummus, which is served with light and airy yucca arepas, is a vegetarian’s friend.

With its bistro lights and lively tables spilling out from bustling sidewalk cafes, strolling down Española Way is sure to bring out the inner bohemian in anyone. In the 1920s, it was built as an artist colony, and thanks to thoughtful and masterful concepts like El Salón, the area’s creative spirit is thoroughly reincarnated. 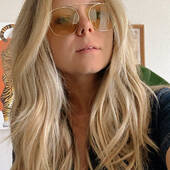 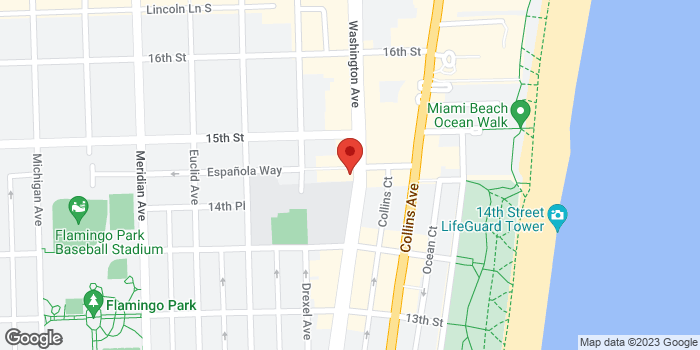