Judging from the food, festivals, clubbing and everything else Miami has to offer, it’s safe to say the city likes over-the-top experiences. Take these five drinks, for example—not one is your average cocktail.

1. The PaletaRita at Coyo Taco

The PaletaRita is one of many delights at Coyo Taco’s secret bar, just a step beyond the small dining area and past the bathrooms. The drink is made with one of Coyo’s fresh paletas (fresh-fruit ices, traditionally made with all-natural ingredients). The corners are cut off the paletas and mixed into the drink, and the rest of the ice pop is placed inside the margarita. Coyo partner Anna Robbins got the idea when experimenting at the bar. “You can use fresh fruit, which can go bad very quickly, or you can buy these frozen purées,” Robbins says. “So I used locally made paletas in the drinks.” The PaletaRita comes in fun, refreshing flavors such as cocopassion (cocoa tequila and a passion fruit paleta) and chili cucumber rimmed with chili salt. 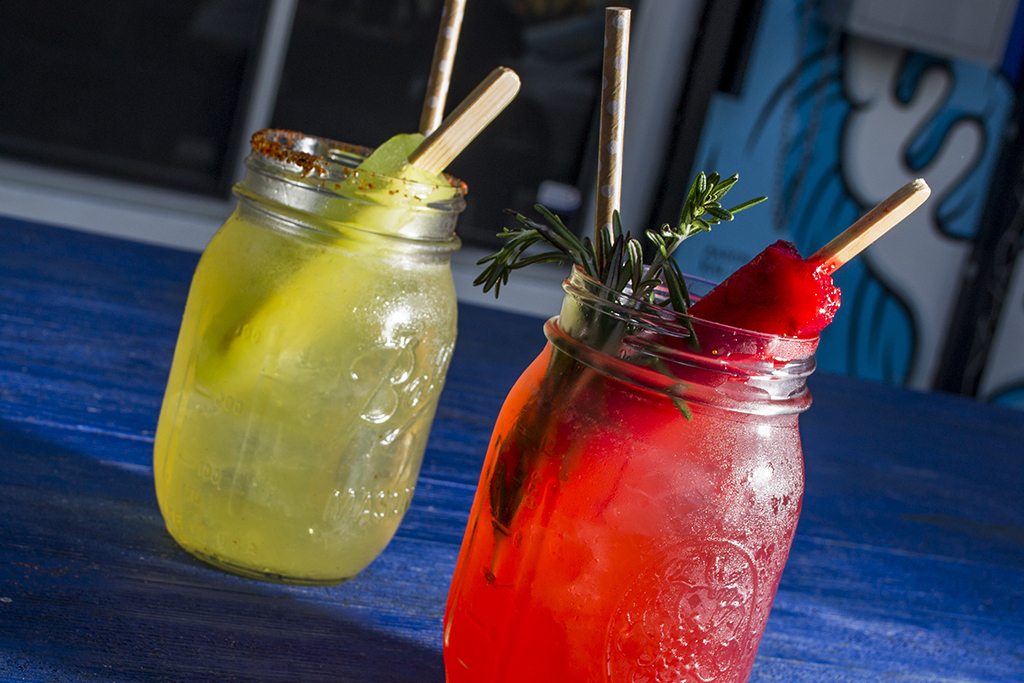 Served in a glass bowl, the Bermuda Bomb provides a good time and mesmerizing sight. Made with sour mix, a melon liqueur shot, Bacardi Limon Rum, Bacardi Coconut Rum, Bacardi 151 Rum and, to heat things up, fire. Ask the bartender for step-by-step instructions on how to handle the fire properly, things could get pretty dangerous if you don’t.

Get your cameras ready because this drink is guaranteed to give your Insta followers major FOMO. The restaurant's signature drink is served in a goblet and features a combination of fruity flavors—such as melon, coconut and pineapple—and vodka, and is garnished with colorful lollipops and candy necklaces. Once the glass arrives, the waiter pours in liquid nitrogen, creating a magical scene of smoke over the glass and table.

4. Fire and Ice Cocktail at the Drawing Room

The fire and ice cocktail is “performed” by mixologist Albert Trummer at the Drawing Room in Miami Beach. This drink involves flames, dry ice smoke and a pyramid of champagne flutes—it's all about putting on a show. “I want to entertain people while they're here and make their evening is memorable,” says Trummer.

This fall-inspired cocktail—made with Hendrick’s Gin, rosemary-pear liqueur and granny smith apples—is poured into a tall bamboo glass and topped with rosemary, apple slices and Rekorderlig spiced cider. While the lush garnishes make this worthy of a snap, the group-size version served in a large barrel really takes it to the next level.

If you’re looking for a drink to share with friends, this is it. The Broken Shaker’s Rum ‘N’ Cola punch is just one of many punches on the menu. This one has house-spiced Bacardi gold rum, homemade cola and bitter cube Jamaica No.1 bitters (robust Jamaican spice overtones used in drinks, with hints of ginger and black pepper). Not only does it taste good and satisfy many, but it’s also beautiful.

7. License to Illa at the Sarsaparilla Club

It's not just the name that's cool; this Southern-inspired cocktail also loooks the part, and tastes great, too. It features a blend of popcorn-infused Woodford Reserve Bourbon and Not Your Father’s Root Beer and is poured into a sarsaparilla-smoked glass.