This being the home of the Oktoberfest beer binge, the number one attraction in Munich must be drinking itself. But with outstanding art museums, compelling history and glistening mountain spas in sight, there’s plenty to lure you away from the beer garden in this beautiful southern city. Munich’s verdant riverbanks, soft southern light and panoramic Alpine views are a world away from industrial Hamburg and gritty Berlin, but refreshingly so. For the ideal day out, tour the rigorous Munich Documentation Centre for the History of National Socialism; stand spellbound before the Brandhorst Museum’s Cy Twombly cycle ‘Le Panto’; or brave a wetsuit and the waves at the Eisbachwelle, Munich’s incongruous surf hotspot at the gateway to the Englischer Garten.

RECOMMENDED: Full guide to the best things to do in Munich 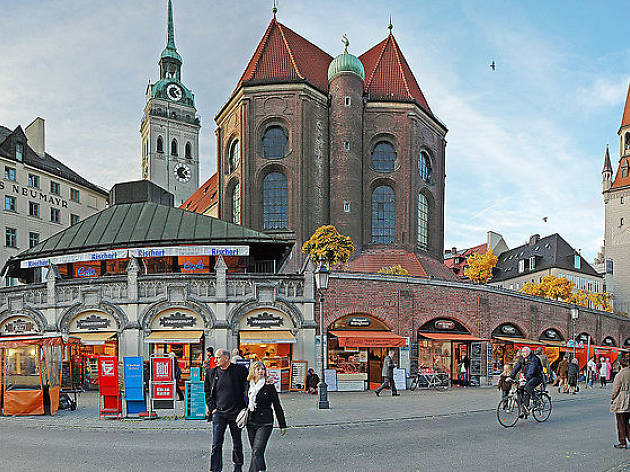 Kick off at Munich’s most famous food market, as excellent for people-watching as it is for fine regional produce. Relax with a drink at one of the numerous stands – no shame in a Radler (beer and lemonade) if you need to take it easy – and set about sampling the array of fresh regional produce, with specialities including bread, speck and Schweinshaxe (ham hock), the love-it-or-hate-it Weißwurst, as well as locally foraged mushrooms. If you’re in town in late November or December, the Viktualienmarkt hosts an annual Christmas market, Alpenwahn, complete with carols, homemade cards and gifts, and generous cupfuls of Glühwein (mulled wine). 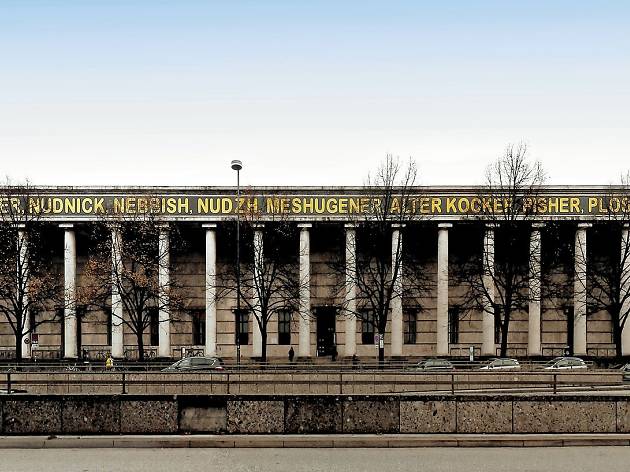 An enormous and imposing sight nestled alongside the picturesque Englischer Garten, Haus der Kunst is one of Munich’s many spectacular art galleries (we’re talking 100 plus). This interdisciplinary space aims to represent all that’s good, exciting and cutting-edge in the world of contemporary art. But this neoclassical building comes with a troubled backstory, too – it was built in 1937 to house Nazi-approved art. Of course, this is no longer the case, but as you wander around you’ll find the Kunst regularly acknowledges, contemplates and engages with its propagandist heritage. When you’re done, head over to the adjoining Goldene Bar to slurp on vibrant cocktails (try the Goldene Bartini – a mouthwatering mix of gin, lillet blanc and lemon) in a blindingly sleek, shiny setting. 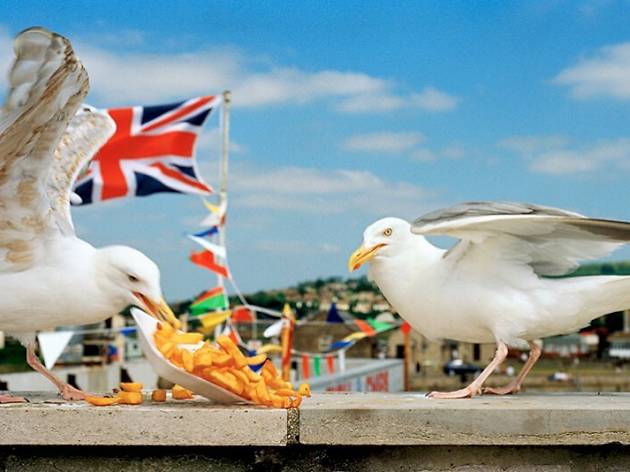 In an unprepossessing building by the Maximiliansbrücke, the Kunstfoyer VKB keeps a much lower profile than the museums of the Kunstareal enclave, but is well worth checking out if you’re into your video art or photography. With a focus on socially and politically minded artists, plus the interaction of still and moving pictures, previous Kunstfoyer shows have included Gordon Parks, Margaret Bourke-White, Sebastião Salgado and the fantastical set designs of Ken Adam (think iconic Bond and Kubrick). There are striking views on to the impressive Maximilaneum, one of Munich’s most prominent buildings, and likely the most palatial student residence ever. 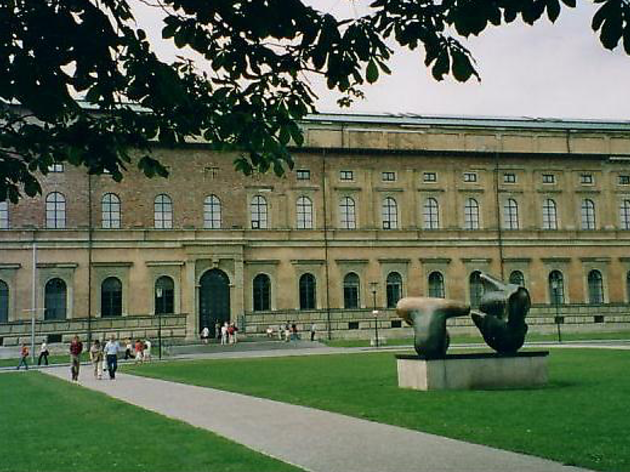 Across the square from the Brandhorst Museum, Munich’s Pinakothek trio (the Alte Pinakothek, Neue Pinakothek and Pinakothek der Moderne) span European art history from the Middle Ages to the present day in blockbuster style. Albrecht Dürer’s Self-Portrait with Fur-Trimmed Robe (Alte Pinakothek), with its Christ-like gaze and textural richness, is the star of the show, but there are abundant treasures here, not least the Pinakothek der Moderne’s line-up from the Blaue Reiter, Munich’s home-grown Expressionist movement. A day pass to all three museums is just €12, but given the breadth of each collection, you may prefer to pick just one and wander at leisure. 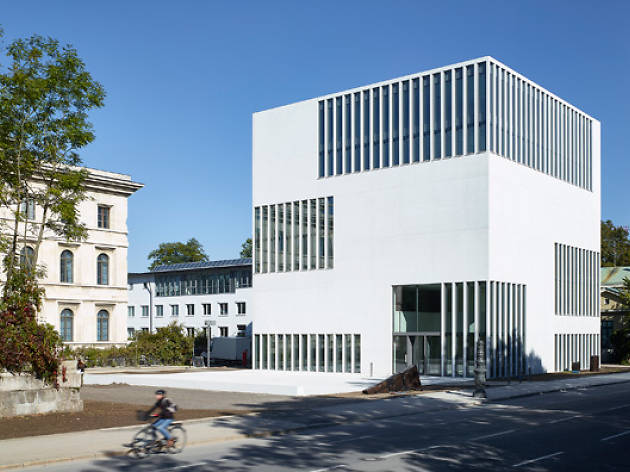 Compared with other German cities, Munich has taken a long time to confront its Nazi history, perhaps precisely because of its particular importance, and responsibility, in the ascent of Hitler’s genocidal regime. It was in Munich, the ‘Capital of the Movement’, that the rise of the National Socialist movement first began, that Hitler enacted his attempted putsch of 1923, and where he later found influential and prosperous patrons. It’s here, too, that Goebbels called for a nationwide pogrom against the Jewish population. An intentionally stark and striking white building, the Documentation Centre for the History of National Socialism sits on the former site of the Brown House, the party headquarters, and sets out to interrogate the association between Munich and the Nazi regime in unflinching detail. 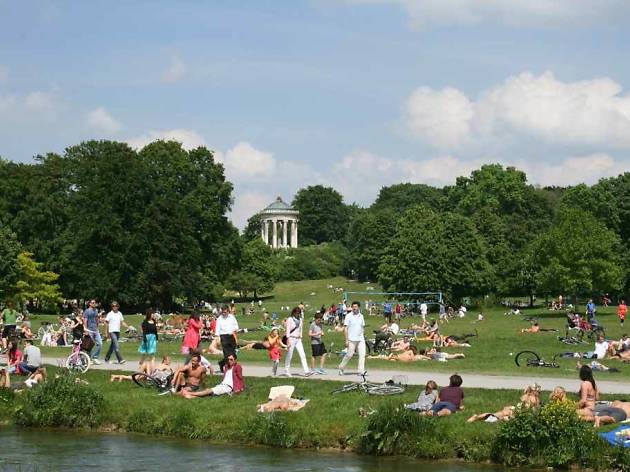 Spread over nearly four square kilometres, Munich’s rolling Englischer Garten is likely bigger and greener than anything you’ve seen in England, but takes its name – and informal style – from the undulating gardens popularised in 18th and 19th-century England by landscape architect Capability Brown. One of the largest green city spaces in the world, it’s undoubtedly Munich’s most beloved outdoor space, heaving with joggers, skaters, dog-walkers, frisbee players and kite-flyers throughout the year. Be sure to enter the park by the Haus der Kunst to catch the Eisbachwelle – the man-made ‘ice creek wave’ that’s one of Munich’s most incongruous, and enjoyable, sights. Here, in sun or snow, hundreds of wetsuit-clad surfers wait in line to ride a rapid standing wave created by submerged concrete. Once you’ve shuddered, cheered or gasped at their kicks and feats, stroll along the more serene Isar tributary, where flocks of picnickers and (typically nude) sunbathers luxuriate in summer, towards picturesque refreshment at the famed Seehaus or Chinesischer Turm beer gardens. The pièce de résistance? The romantic, Greek temple-like Monopteros (just south of the Chinesischer Turm) where you can enjoy spectacular sunset views. 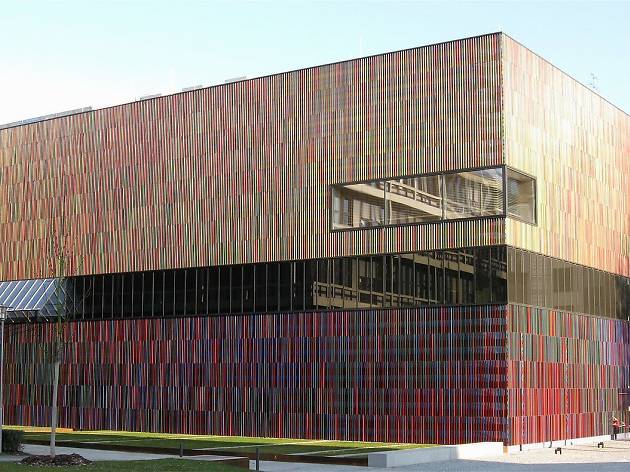 Not yet ten years old, the Brandhorst Museum in the north-eastern corner of Munich’s Kunstareal art district is impossible to miss. With its striped 23-shade exterior, this dazzling addition to Munich’s art scene displays around 200 modern works from the collection of Anette Brandhorst and her husband Udo Fritz-Hermann. Big hitters include Joseph Beuys, Gerhard Richter, Bruce Nauman, Andy Warhol and Cy Twombly. The polygonal room above the foyer was designed expressly for Twombly’s ‘Lepanto’, a breathtaking 12-canvas sequence depicting a fiery 16th-century sea battle between the Ottomans and the so-called ‘Holy League’ of European forces. The Brandhorst collection also boasts one of the most comprehensive holdings of Picasso-illustrated books. 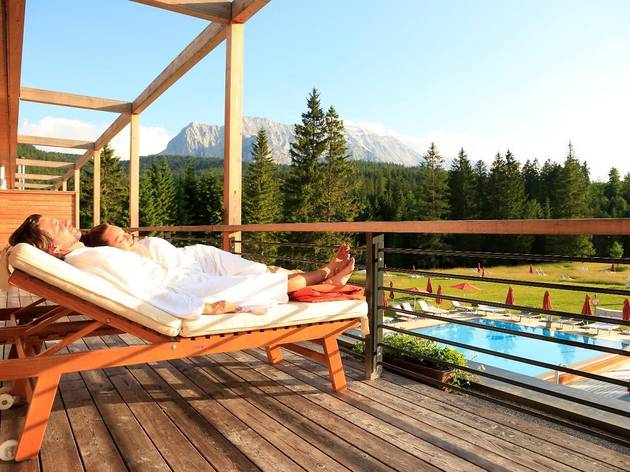 The scenic landscapes around Munich are just as seductive as the ever popular city centre. To escape for an action-packed weekend of hiking, skiing and Alpine spa-ing, journey across to Kranzbach, an idyllic spot only an hour-and-a-half’s drive from Munich. At the foot of Germany’s highest peak, the Zugspitze, the area is densely surrounded by protected meadows and fragrant pine forests. The Wellness Hotel itself is a magnificent stone building dating to 1915, offset with an opulent interior courtesy of design aficionado and ‘Elle Decoration’ founding editor Isle Crawford. Whether you’re looking to bust some yoga stretches, detox with the aid of Ayurvedic treatments, or simply soak up mountain views from within the fluffiest of robes, you’ll find restorative bliss – and an effortless way to turn your city break into a break from the city. 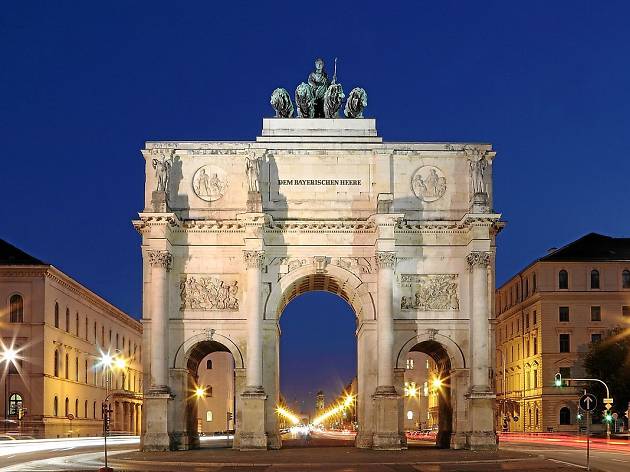 It’s a short and scenic stroll down the Ludwigstrasse to the Siegestor, a war-torn triumphal arch that tells much of Munich – and German – history. Commissioned by King Ludwig of Bavaria, the three-arched victory gate was completed in 1852 and originally dedicated to the glory of the Bavarian army in the Revolutionary and Napoleonic wars, some two decades before German unification. From the north, the arch retains its regional pomp and pride, all classical columns and bas-relief carvings, topped by the personified statue of Bavaria on a lion-drawn carriage. But on the other side, facing up toward the Odeonsplatz, the top of the arch is a startlingly empty expanse of stone. After heavy bomb damage during the Second World War, restoration efforts left this upper register intentionally blank, a bare-faced marker of destruction and guilt and a sharp qualifier to the glorifying military narrative of the arch’s original construction. Beneath the empty space are the words: ‘Dem Sieg geweiht, von Krieg zersört, zum Frieden mahnend’, or ‘Dedicated to victory, destroyed by war, urging peace’.

There’s more to this city than just beer... 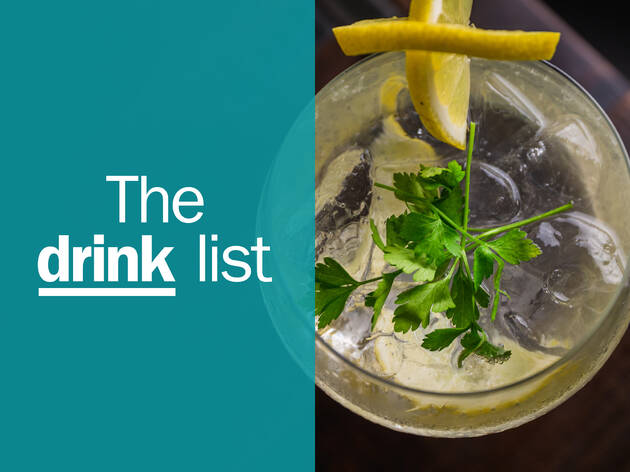 With the world’s biggest beer festival, beer cellars galore and the best beer gardens on the planet, Munich has an enviable reputation for… well, yes, that drink we call beer. There is, however, so much more to the city’s bar scene than that.