Sure, Oktoberfest always pulls in the crowds – in fact, it’s become a full-blown annual fixture for many of Europe’s party-hungry youth. But despite the free-flowing booze, Munich has long been considered hip and edgy Berlin’s oh-so-uncool southern cousin. All that beer doesn’t a cutting-edge night out make. And up against the capital’s endless clubbing options, Münchner nightlife may well pale by comparison.

But stop right there, we say – because if you don’t want to go all that heavy and are simply after a good dose of culture and some brilliant things to do, Munich’s certainly playing catch-up. The country’s third largest city (and capital of Bavaria) has experienced a major resurgence in recent years, and not just come early autumn. From an architectural standpoint, the heavily-bombed city’s beauty shines again thanks to a carefully executed reconstruction plan of historic buildings damaged or destroyed during the two World Wars. Add in a booming economy oiled by big businesses like BMW, some major landmarks, plus a passionate restaurant culture that sinks its teeth into experimental cooking while still elevating hearty Bavarian classics; wash it all down with beer, beer and more beer, and finally you’ll begin to understand why Munich keeps on topping lists of the world’s most liveable cities.

Done something on this list and loved it? Share it with the hashtag #TimeOutDoList and tag @TimeOutEverywhere. You can also find out more about how Time Out selects the very best things to do all over the world.

Best things to do in Munich 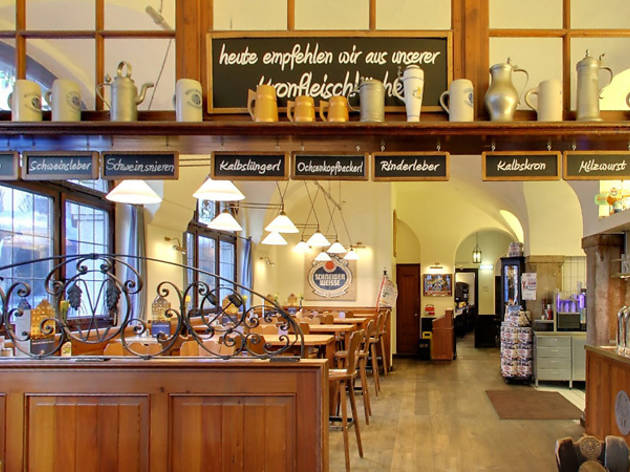 There aren’t many places in the world where beer for breakfast is practically mandatory. To enjoy the full experience of Weisswurst, a pale and tender Bavarian sausage in which minced veal, pork and seasonings are crammed into pork casings, head to Schneider Brauhaus, and pair your meat with a pillowy-soft, house-made Brezn (pretzel) and Weissbier (wheat beer). The highly perishable snack, best coated with a layer of Weisswurstsenf (a sweet mustard), is made fresh – and before refrigerators were around was eaten only in the morning. That means you won’t find this delicacy on menus after noon. Sausage and beer too much for you at this early hour? There’s always the liver dumplings with sauerkraut, fried onions and boiled potatoes. 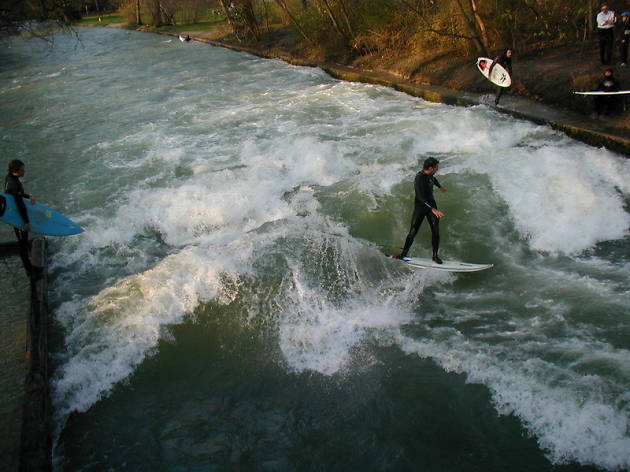 Surfing seems an unlikely sight in a landlocked city – but watching surfers master the waves of Munich’s Eisbach (‘Ice Stream’) River has become a serious pastime for locals and visitors alike. Special boards and skills are needed for this cold-water sport, which was banned until 2010 but now draws brave professional and semi-professional athletes in wetsuits year round. Unlike ocean surfing, there’s no paddling to catch waves, which are artificially created on a concrete break: this means surfers must be ready to ride as soon as they hit the water. It’s best to have experience before diving in. On the hottest summer days, things get a little weird; you may see a local or two surf naked. 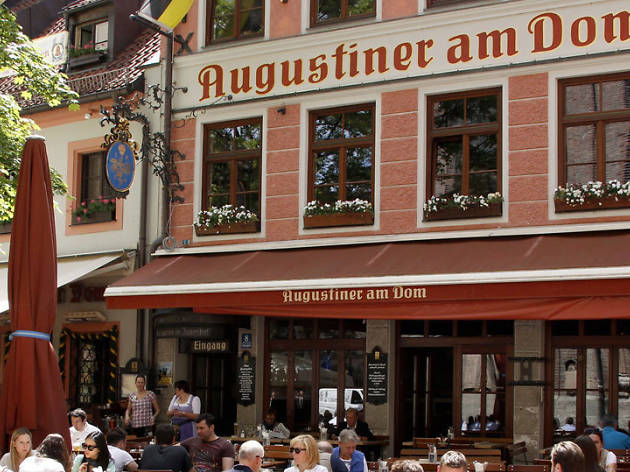 Typical Bavarian cuisine is sublimely rich and filling – and the drama of having a giant knuckle of pork on your plate is an experience that shouldn’t be missed. Marinated for days and then slowly roasted at a low temperature so it flakes off the bone, Schweinshaxe (pork knuckle)’s most complementary side dish is Knoedeln (mashed potatoes rolled into neat balls) and the best place to dig into both is Augustiner am Dom. The traditional Bavarian restaurant is in Munich’s old town, just off the central city square, Marienplatz. Note that each ring of the bell marks a freshly tapped wooden barrel of Augustine beer chilled to 5C. Head to the spacious beer garden for the best people-watching. 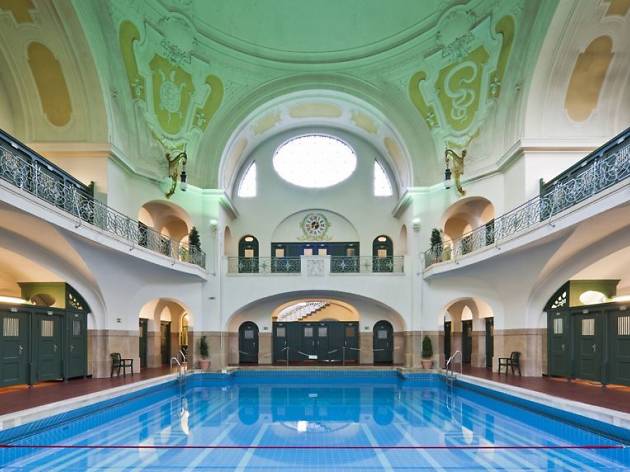 A painstakingly restored Art Nouveau dome soars majestically over one of Europe’s most beautiful swimming pools at Müllersches Volksbad, a bathing temple with an open-air courtyard that debuted on Munich’s Isar river in 1901. The 100-foot-long pool, heated to 27C, was once for men only, while a smaller, slightly warmer pool was for women – both are co-ed now. Visit the Roman steam baths to discover Baroque touches such as murals, stucco, bronze statues and ornate iron bars. The true German experience lies in the Finnish sauna, where the Aufguss (aromatic steam infusion) kicks off on the hour. In this slightly sadistic, merciless ritual – not for the faint at heart – an Aufgussmeister pours water on hot rocks and beats the heat your way with a towel. Speiserei Volksbad, the on-site restaurant, offers a wide range of health-conscious meals (think smoothie bowls, chia puddings and the like). Bring your own towel to avoid buying one on the spot. 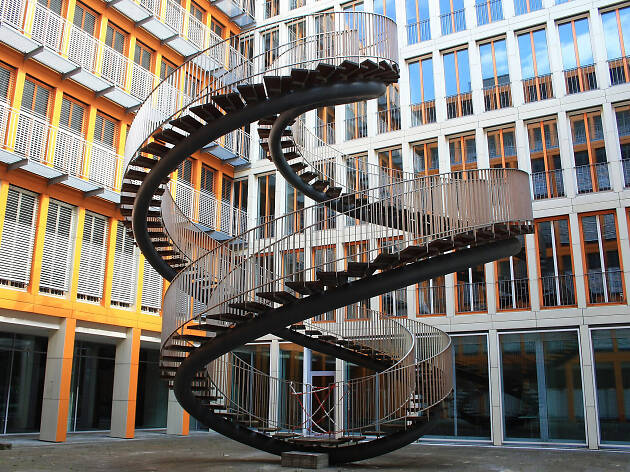 In the inner courtyard of an office building, a spiral steel staircase reaches up into the sky – only to return back to earth again. A study of movement without purpose by Danish artist Olafur Eliasson, ‘Umschreibung’ is a sculpture comprising two spiral staircases merging to creating a double helix. You’ll find it inside the KPMG building, at Ganghoferstrasse 29. Worth a look, if only to admire the engineering required to balance the structure on a single point. 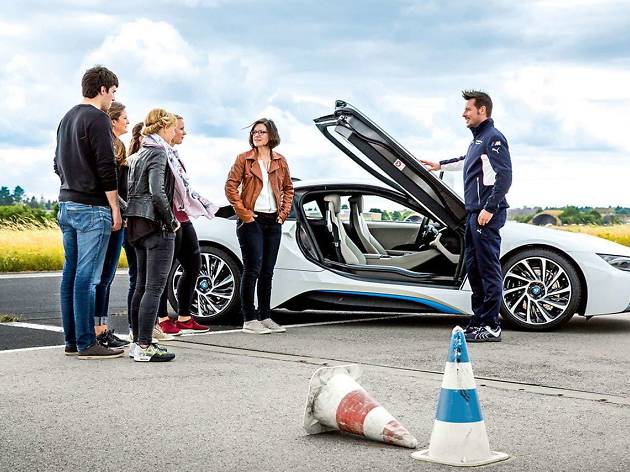 Germany’s Autobahnen have gained a cult status for their lack of speed limits – and while this isn’t true everywhere (it’s mainly limited to rural areas), why not polish up those road skills just in case? At the BMW and MINI Driving Academy Maisach, a former airport 40 minutes outside Munich, specialised driving courses are available for anyone over 18. The classes range from theory to live challenges tackling manoeuvres at high speeds. Your coach may even be a former race car driver. 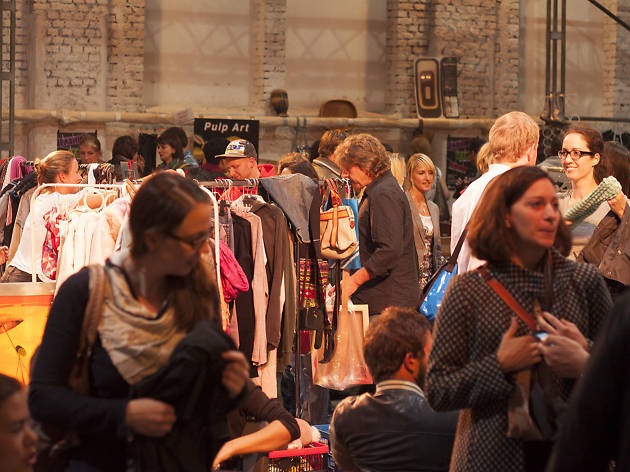 Make a big night out of rummaging through vintage goodies at this night market. Midnightbazar kicks off at 5pm every other Saturday and involves vendors selling clothes, records, nick-nacks and more. There’s a nominal entrance fee, but for your money you get to browse row upon row of great bargains (don't forget to haggle), all soundtracked by a live DJ or band. You can also grab dinner while you’re there at one of various street food and cocktail stands. 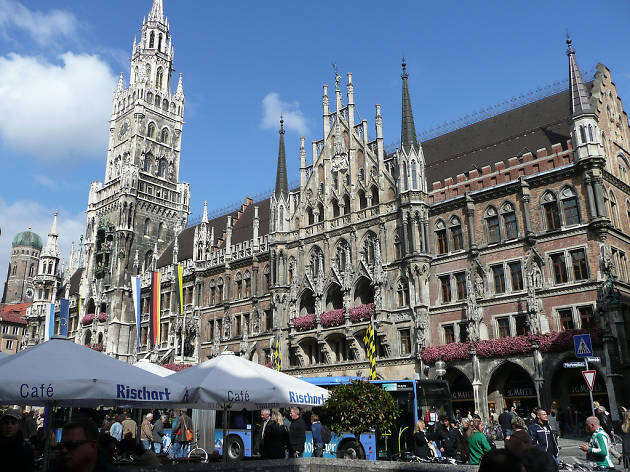 There’s something mesmerising about clock mechanics: a childhood state of wonder is only a chime away. At the northern end of Marienplatz, Munich’s central square, a cuckoo clock dating to 1908 depicts the city’s history across 43 bells and 32 life-sized figures. With two or three shows daily (depending on the season), the Glockenspiel on the tower balcony of the Neues Rathaus always draws a crowd. We recommend grabbing a coffee and settling in a few minutes early – before making a wager on which tiny knight will win the adorable duel. Take the lift up to the Café Glockenspiel for the best views. 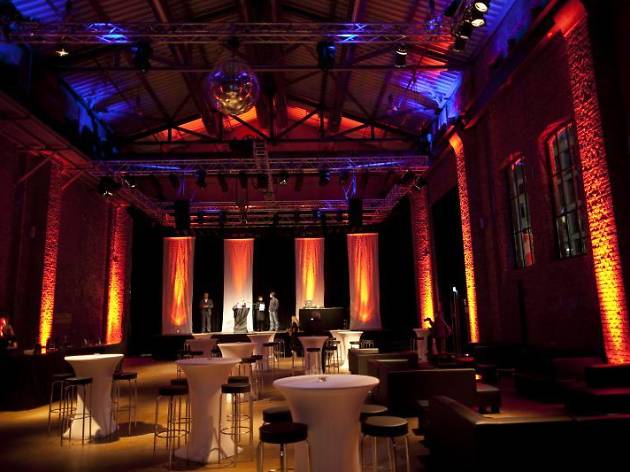 An old power and heat supply station for Munich’s main train station is now a concert venue and theatre revered for its acoustics. Rock, pop, folk and cabaret acts perform in the restored brick building with its distinctive chimney. Some remnants of its manufacturing past remain inside: note the old cargo crane in the turbine hall. Conveniently located in the city centre – unlike most of the city’s music venues – Freiheiz has a maximum capacity of just 400, adding a special intimacy to your night out. Check the events page for special parties with a flat fee (sometimes covering food and drink). 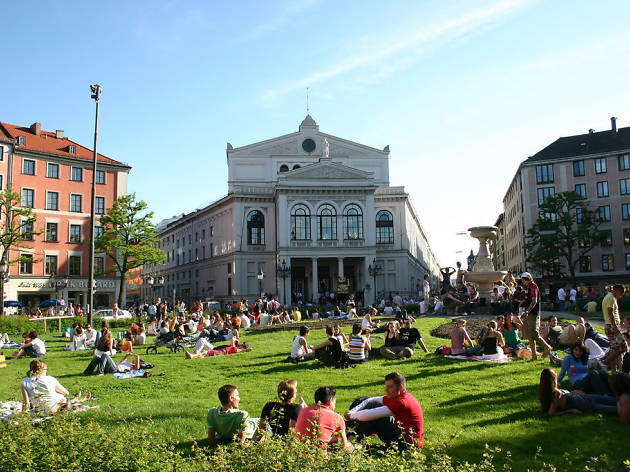 Gentrification is well under way in the once-edgy beating heart of Munich’s LGBTQ+ scene. The vibrant Glockenbachviertel remains one of Munich’s prettiest districts, brimming with chic boutiques, cosy cafes and buzzing bars. Tushita tea house on Klenzestrasse makes a cup of tea a spiritual affair with its assortment of 150 traditionally prepared blends and collection of kettles, tea pots, cups, bowls, plus just about everything else in the tea arena (they also have a daily-changing vegan menu and excellent homemade cakes). Summer draws locals and visitors alike to the terrace of the Flushing Meadows Bar, on the fourth floor of the hotel of the same name, where artisanal cocktails come with sweeping views of the city. 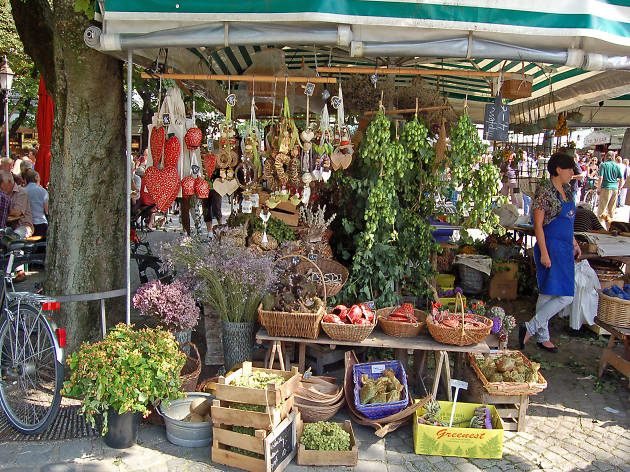 A sprawling 200-year-old open-air market, Viktualienmarkt offers a handy (and relatively inexpensive) pit stop if you’re exploring Munich’s historic centre. Some 100 stalls offer a wide range of German and international delights from Monday through to Saturday. You’ll find traditional Weisswurst sausage, barrels of pickles, cheeses from around Europe, flowers, spices, coffee, fresh juice and more. A shady beer garden with picnic-style benches provides the perfect throne from which to observe this age-old market in action. 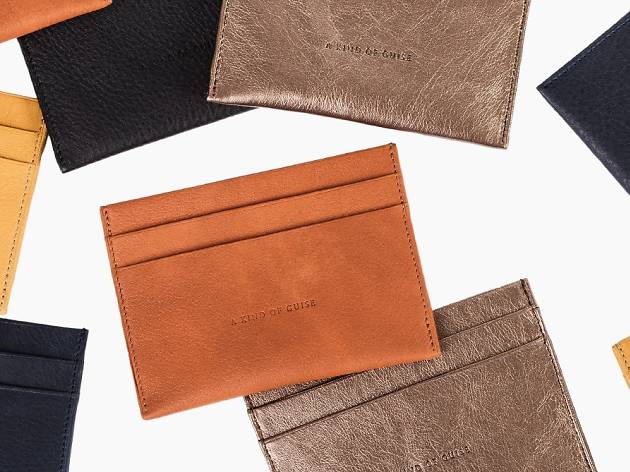 Photograph: A Kind of Guise

Founded in 2009 on the premise it would offer only high-quality products produced locally in limited numbers, A Kind of Guise will give you an excellent taste of the best Germany has to offer in the fashion department. The company, headquartered in Munich with an outpost in Berlin, works with more than 15 domestic businesses on a well-curated range of menswear, womenswear and eyewear made in Germany. From a smart men’s seersucker that’s 100 percent cotton to a pair of women’s trousers with a jaunty flair, contemporary minimalist pieces with a focus on premium fabrics from reputable weavers are offered in natural materials including wool, cashmere and silk. Ready for a statement-worthy coat? Don’t miss the extensive outerwear collection.

Now try some of these big-hitting sights... 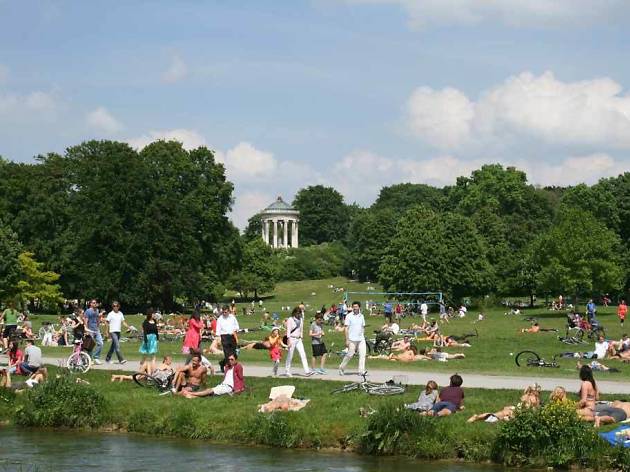 With outstanding art museums, compelling history and glistening mountain spas in sight, there’s plenty in Munich to lure you away from the beer garden.