In case you didn’t know, Quentin Tarantino is a movie lover and talker. While holding court in a swanky Beverly Hills, California, hotel, the 52-year-old filmmaker speaks at a quick-fire clip about his latest, The Hateful Eight, a Western set in post–Civil War Wyoming where a snowstorm traps a random group of people (played by the likes of Kurt Russell, Samuel L. Jackson, Jennifer Jason Leigh and Tim Roth) under one roof. Politics are challenged. Racial prejudices flare. And there will be—this being a Tarantino movie—blood. When a draft script leaked early in 2014, a furious Tarantino threatened to pull the plug on the project—only to host a staged reading of the screenplay in Los Angeles months later. Now his layered take on race in America is hitting the big screen, and the subject is more timely than ever. The Hateful Eight is subtle (by Tarantino standards, although a guy’s head gets blown off in close-up), brooding and mature. An epic of sorts weighing in at three-plus hours—with an actual intermission and shot on 70-millimeter film—it is old-school filmmaking of the highest order. The video-store-clerk-made-good has been bringing us the best movies for more than 20 years. He always vowed he’d call it a day at 10 films. The Hateful Eight is, coincidentally, number eight. The big question is, when a man loves cinema this much, how can he stop? He has a lot to say about that.

The Hateful Eight takes place just after the Civil War, but it explores a very topical theme: racial division in America. Are you surprised by just how relevant it is?
If you talk to someone in a black neighborhood in America, they’ll tell you that this conversation has been relevant for the last 20 years. But as far as the purchase it’s had in the mainstream press as something that “must be dealt with,” that really has happened since we’ve been making the movie. One good thing about the first draft of The Hateful Eight leaking on the Internet a while back, as distressed as I was, is that I am on record as having written this script long before the recent events in the news.

Is this your most political film?
Yes, but when I first started writing it, I didn’t know that. Even when I finished the script, I didn’t know, until society started kind of catching up with it. I’ve dealt with race, in terms of black and white, in a lot of my movies—in all my movies, to some degree or other. But I do think that dealing with black and white in America is something I have to contribute to the Western genre. That hasn’t been done by anyone else, at least not in a meaningful way.

So what brought you back?
The Western genre has always been pretty precise when it comes to dealing with the decades in which the films were made. Vietnam or Watergate hung over all the Westerns that came out during the late 1960s and the 1970s. They were cynical to their core. When you’re making a Western, you can’t help dealing with the American zeitgeist. Ten or 20 years from now, hopefully you’ll be able to look at The Hateful Eight and get a good picture of the concerns of America at this time.

"You don’t make a movie just because 'blah blah blah' wants to work with you." 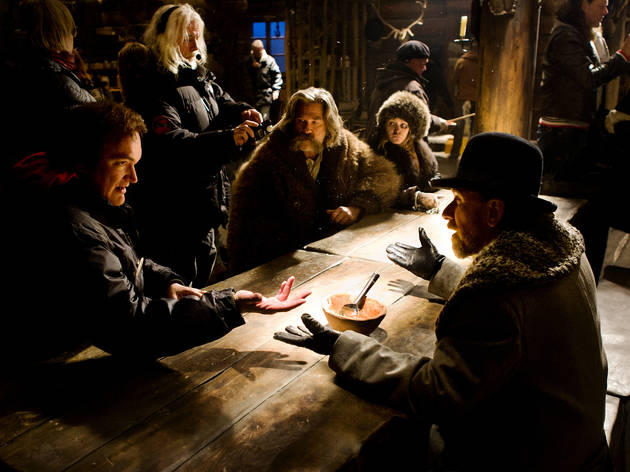 Are you still planning to make 10 films and stop? This is your eighth.
That is the idea. It usually takes me about three years to make a movie anyway, so you’re talking about almost a decade left. What about TV? Does that count? I might do a TV thing in between, and that wouldn’t be part of the 10.

Why cut it off there?
I don’t want to be the guy who’s doing this forever. There should be an end. And I should take responsibility for that. I’ve gotten more solid on that idea. I think a lot of directors, if not all directors, think they have more time than they do. By time, I mean either mortality or changes of fortune in the industry. You never know what will happen. And so, I think every director walks around thinking, even when they have only one more movie to go, that they have six left.

Does that make choosing your next project more difficult?
Certainly the reasons for making a film become sharper. It’s not about making a movie to pay for your alimony. You don’t make a movie just because “blah blah blah” wants to work with you.

The Hateful Eight is almost like a theater piece more than an action film.
One of the things I learned from making this is how to turn violence into a tone that runs through the story, that hangs over the characters’ heads, like their own swords of Damocles. You don’t know when the violence is going to happen, but you know it is going to happen, and you are just waiting for it. The trick was extending that for the entire movie. If the movie works, it should be suspenseful. There is a long, long buildup as I put my chess pieces in place. I am playing chess, and I have to put them all in the right spot before I start killing them off, and I am asking you for some patience.

Is there a kind of film you’re burning to make?
There is not a genre left where I have that same burning desire I had to do a World War II–movie or a martial-arts movie. I think maybe the one genre left might be a 1930s-gangster movie, that kind of John Dillinger thing. I’m interested in doing something contemporary, where I can have a character who gets in a car and turns on the radio, so I can have a cool driving montage. And if I had all the time in the world, I would love to make a really, really scary horror film, like The Exorcist. But I don’t know if me taking my sense of humor and putting it in the backseat just to hit a tone of dread from beginning to end is the best use of my talents or my time.

Right. Can a Quentin Tarantino not be funny on some level?
I don’t know if I could let go of that humor and be able to make something like The Exorcist and keep that tone of dread all the way through. Although a case could be made that The Hateful Eight is the closest I’ve ever come to a horror film. And more than any other Western, the film that influenced this movie the most is John Carpenter’s The Thing, way beyond just working with the same composer, Ennio Morricone, and star, Kurt Russell. The Thing also hugely influenced Reservoir Dogs, of course. And in its own way, The Hateful Eight is also influenced by Reservoir Dogs. 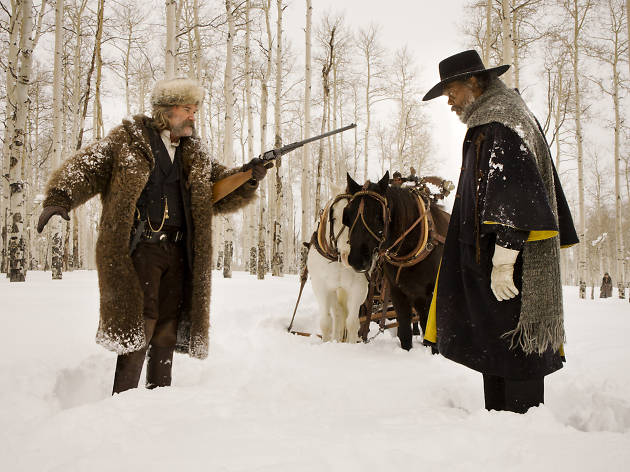 Quentin Tarantino’s trilogy of sort-of-westerns closes with ‘The Hateful Eight,’ in which a blizzard traps guess-how-many bounty hunters, criminals, lowlifes and all-round wrong ’uns in a mountain stopover in post-Civil War Wyoming.