Dan Deacon is a real rags-to-riches story. Well, abandoned-warehouses-to-packed-stadiums is more like it. The underground hero opened for Arcade Fire on tour last year, which is quite a feat for a quirky electronic musician who made his name on the DIY circuit. But when you consider the cult status he's attained through years of touring, with high-energy shows involving interactive hijinks like dance contests and human tunnels, it makes more sense. To everyone but Dan Deacon, that is. “I was like, Professional sports are played here. Michael Jordan played basketball here, and now I’m singing through a pitch-shift pedal. What the hell is going on?" Deacon hits Rough Trade NYC on February 25 to celebrate the release of his new album, Gliss Riffer.

How was touring with Arcade Fire?
It was completely surreal. Luckily, it was with them. Their audience, for a mainstream audience, is very excited. They brought the show to great heights and were very supportive of weird music. I was really dreading it. I haven’t opened up for a band since 2007; I’m so spoiled being a headliner to my own super small shows. I feel like it really did help me become a better performer, because I had to give it more than 100 percent to be like, No, give a shit. I wanted them not to just endure me but to enjoy it. When we played Pittsburgh, Girl Talk came, and we were hanging out backstage, and he was like, “You realize there are some people here who [are at] their first concert. You’re going to be the first live band they’ve ever seen.” And that just blew my mind. And it was really fun after that.

You opted to return to self-producing with Gliss Riffer. What led to that decision?
After America came out and I was on tour, I started working on a mixtape called Wish Book Volume 1. It was all just pulling tracks I had in my iTunes into Ableton and manipulating them. I kept thinking how fun it was to be working with sound inside my computer. For the last two records, it had been very little of that. So I started thinking, I could make a whole record this way. I just sort of fell in love with the process.

But self-producing wasn’t entirely new for you. You self-produced [2007's] Spiderman of the Rings, right?
I’d never done anything like this, completely by myself. I mean, Spiderman of the Rings was by myself, but that was literally a mike plugged directly into a laptop. This record was me making my first solo studio album by myself. It’d be kind of like I’ve built a bunch of forts as a kid, but this was the first house that I built.

I’m curious if the process was faster or slower, having outside input versus going it alone.
Some parts were certainly faster, but then there were sections of great doubt. I just couldn’t finish. I didn’t want to finish either. It was fun to go into the studio every day for 14 hours and make different arrangements, but that became this neurosis. I had literally 80 versions of a track called “Learning to Relax,” and I had to pick the one that I liked the most, and it was just excruciating. But then, luckily, you know, the title came from this Bill Murray video [from the Toronto International Film Festival] that I watched. It was about how you’re the best at what you do when you’re very, very relaxed. Up until watching that video, I was of the mindset that I was the best at what I did when I was fearing for my life. Like, I really wished I could organize my day while running out of a burning building. Stress was my biggest motivator. Then I saw that clip, and everything started to fall into place. I finished the record very quickly after that.

The album has a more spacious sound at times, relative to your previous efforts.
It seemed to be a record where space was appropriate. I wanted there to be a clarity that my music didn’t have before, and I started thinking that I should treat the sounds like acoustic instruments—give them room and make sure that every voice can be heard. I’m putting it there to be heard, not just to fill space. That was a shift in the way I was thinking.

Your last album, America, has a very distinct central theme. Was Gliss Riffer built around a core concept?
I think the concept formed in the writing of it. Something I’m currently fascinated—well, obsessed—with is a shifting consciousness. Like, whenever I see an old painting from the 1500s, I think, it would suck to have been that painting for 600 years and hang on that wall. Then I start thinking, that’s so arrogant to think that a painting would have the same perception of time as a human. I don’t expect a mountain to have the same morality as a human, and I don’t expect the sun to have the concept of jealousy or hate. Does that make any sense?

Sure.
So I guess the record is about that. [Laughs] As opposed to being a disenfranchised American. And just trying to figure out how to relax and how to not have anxiety overshadow the positive things in my life, which I think is why I write music in the first place. It takes me out of reality. It’s fun to get lost in the sounds and to have it wash over me, and I don’t think it’s just like an escape. I do think it actually helps me work through things. I’m genuinely less stressed if I write music than I am on a day where I don’t.

Speaking of escape, you’ve said previously that you've been working on making your shows not be just about escapism.
In the last couple years, I’ve been thinking about how any performer onstage thinks about an audience as just one group, but an audience member doesn’t think about themselves that way. An audience member is an individual, in a room full of people. When you change that, when the performer starts thinking of the audience in regards to their individuality and an audience starts thinking of themselves as a collective, I think you can get really interesting things to happen. That’s what I’ve been working with for the last few years.

Can you describe the effect that has?
It changes night to night with every audience. I guess that’s what I like about it. I don’t make quote-unquote experimental music, but I do think anything where there’s a risk of failure is an experiment. And the moment I start choosing people at random to be the performers and then to pick the next performers, there’s a great risk for failure. That’s what’s exciting. And sometimes it’s polarizing. Sometimes it makes people feel like, I didn’t want to participate. Well, you didn’t have to. But you had to decide if you wanted to or not. That’s what I like. I like having a performance that requires an audience to choose to be passive or active.

There seems to be a contrast there. You exercise such precise control in the production process—you mentioned 80 versions of a single track—but then in live performance, you invite chance or relinquish some control. Any connection?
I think if you think about the beginnings of the recording process, I do start with just riffing—just throwing sound into the computer and then sculpting that sound afterward. It does really start like a pile of mud that I have to turn into a mask. It’s like I start the song from these raw ingredients and then try my best to sculpt it into something that I’m proud of. And then I present it live, and I do everything I can to destroy it. [Laughs] No, but that’s where the chance re-enters. Because once it’s done, you can start tearing it apart again. 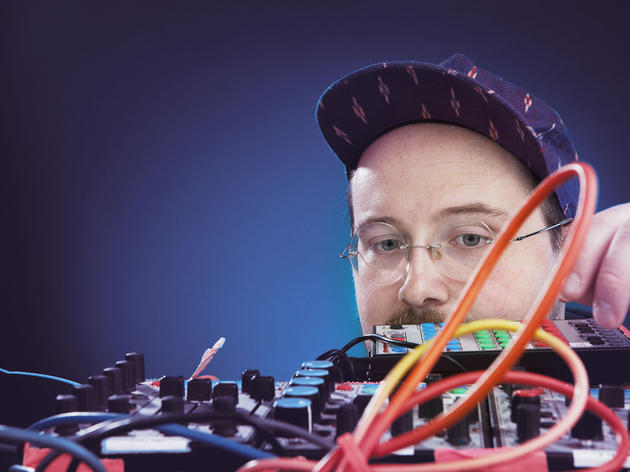 Despite being a master of glitchy electronic sounds, Dan Deacon's highbrow compositional chops and DIY ethos make him a better fit for an underground punk venue than a big EDM club. Deacon's performances—which usually involve directed crowd-participation dance-offs—are sweaty, euphoric affairs. This show, which celebrates the Feb 25 release of his new album, Glass Riffer, should be no different.