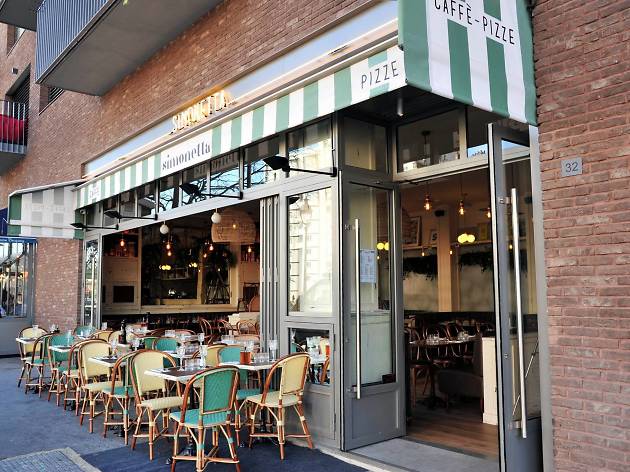 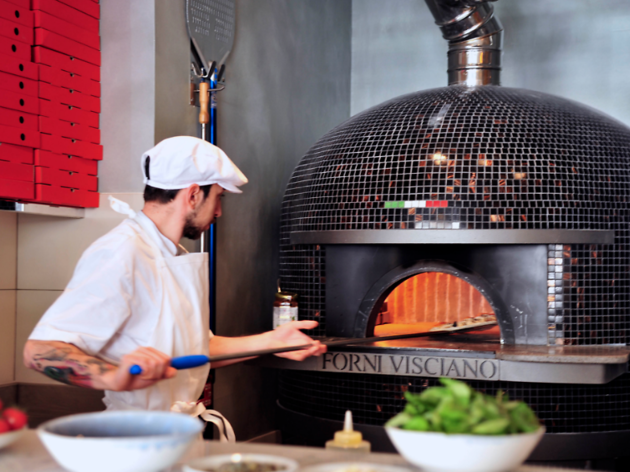 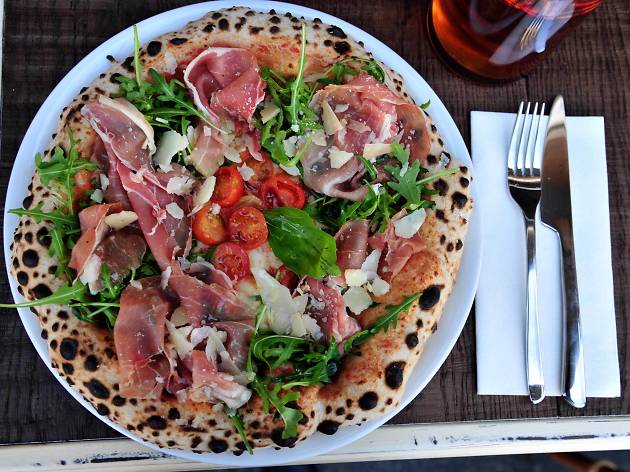 A new Italian trattoria serving up pizzas bigger than we can eat.

If the cliché of Italian restaurants is clunky wood and checkered tablecloths, Simonetta (next door to sister Maison Becquey), spilling out onto the canal de l’Ourcq, redefines this image. Round booths in sage green velvet and little square tables with thick-cut glassware sitting on them. Enormous wicker birdcage lampshades hang from the partially mirrored ceiling and overflowing plant pots line the walls. At 9pm on a Saturday, Simonetta is as bustling and trendy as we’ve come to expect from this part of the 19th.

The size of your party dictates where you’ll be seated, and if you’re a two it’s likely to be one of the tables that touch along the back wall. It’s a little too close for comfort, we wouldn’t suggest going there to discuss something important.

OK, enough déco, down to the food. The menu is well sized, with 7 starters (€7-11), 4 salads (€13-17) and 15 different pizzas (€11-18) from 3 different kinds (Rosso, Bianche and Speciali) - just enough choice. To start, a burrata pugliese – a glossy little lump sitting on a bed of rocket and cherry tomatoes. It’s creamy and fresh, perhaps not as tasty as you’ll find elsewhere, but nonetheless better than the norm. Alongside that, a plate of mortadella; ribbon-thin and delicious, but lacking the pistachios that it was advertised as having.

The pizzas (that arrived steamingly quickly after the starters had been gone) were hefty to say the least. Neapolitan fans will be happy - a no nonsense base with puffy, charred, puckered crusts. Both pizzas – Burrata Forte (burrata, spianata piquante, sliced green peppers, fresh basil) and Simonetta (San Daniele DOP ham, tomato base, gooey mozzarella, punchy rocket, Parmesan shavings, fresh basil) – were heaving with fresh ingredients that sung with taste. So go hungry, these aren’t for the faint of belly.

To finish, an authentic Neapolitan baba. Not sure how they could have packed any more moisture in - bursting with rum flavor but without the sting of alcohol. A row of fresh kiwis gave a tropical spin which was rather pleasant, if unexpected.

Staff were incredibly friendly (stretching to over attentive) and all wine and water is poured – a nice touch given the price bracket. Simonetta has only been open a month or so, they're objective? "To be the best pizza in Paris". All in all, they're already off to a good start at achieving this.