After a crazy-pants 2017, we could all use a good rager on New Year’s Eve. Philadelphia offers no shortage of parties and events, whether you want to ring in 2018 under a booming sky of fireworks at Blue Cross RiverRink Winterfest or dance your cares away at one of the coolest Philadelphia nightclubs. We’ve compiled a comprehensive list of parties to suit every type of reveler on New Year’s Eve in Philadephia, including dinners at some of the best new restaurants in Philadelphia and some shindigs for kids. Find all that and more below.

When is New Year’s Eve?

New Year’s Eve takes place on the last day of the year—December 31, 2017. Most parties get going in Philadelphia around 8pm.

When are the fireworks in Philly on New Year’s Eve?

In Philadelphia, you have two chances to catch the SugarHouse Casino New Year's Eve Fireworks spectacle on the Delaware River Waterfront—at 6pm and then again at midnight. They can be seen from most anywhere in the city, but we like a good rooftop or a spot along the river so you can look straight up at the lights in all their glory. 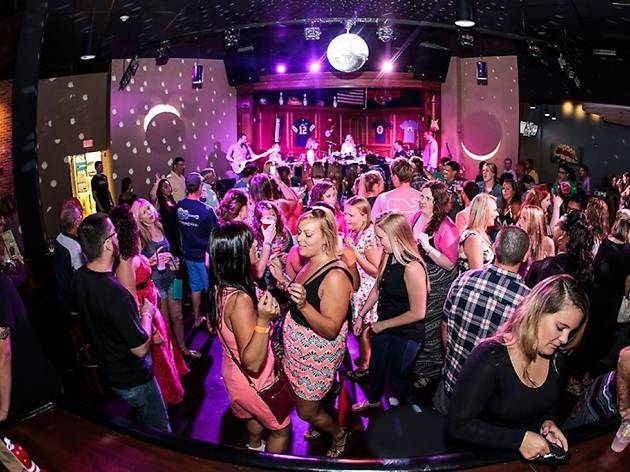 Howl at the Moon

The Center City dueling piano bar concludes 2017 with a four-hour open bar that includes an hors d’oeuvres buffet from 9 to 10pm, a complimentary champagne toast and party favors. A “Champagne Supernova” package for a cool $500 reserves a table for a party of four, an extra hour’s access to the buffet and two extra hours of open bar. The venue’s house band takes over the music from 7pm to 2am. 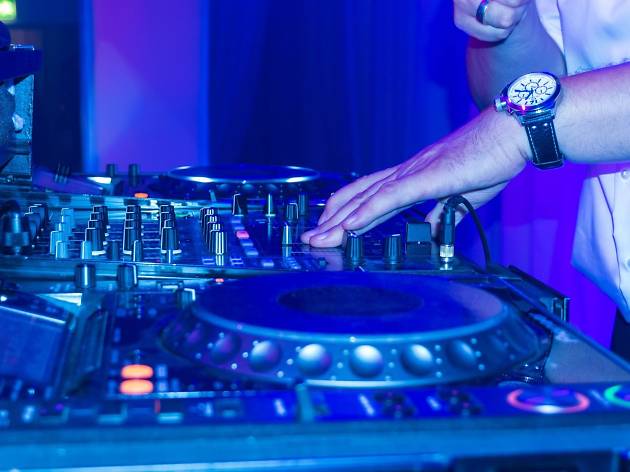 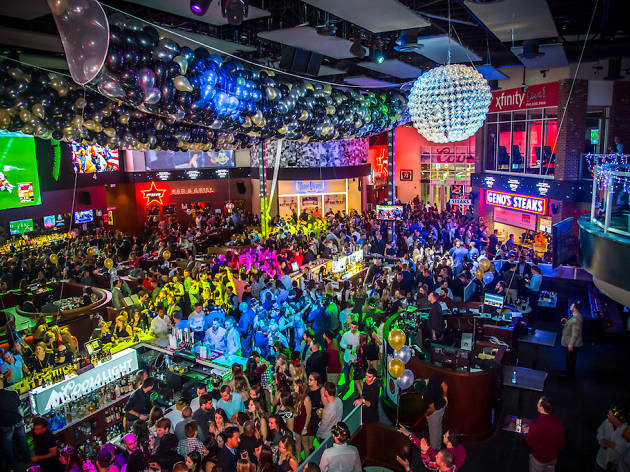 XFINITY Live! organizes a New Year’s Eve wonderland for those wanting a little more variety in their countdown-to-midnight festivities. Hop between five bars on-premises at the complex, including Victory Beer Hall, 1100 Social, PBR Philly, Broad Street Bullies Pub and NBC Sports Arena. Split Decision, a local party band, plays Victory Beer Hall, while karaoke machines are set up at Broad Street Bullies Pub. And if that’s not enough for you, there will be buckle bunnies and a mechanical bull. 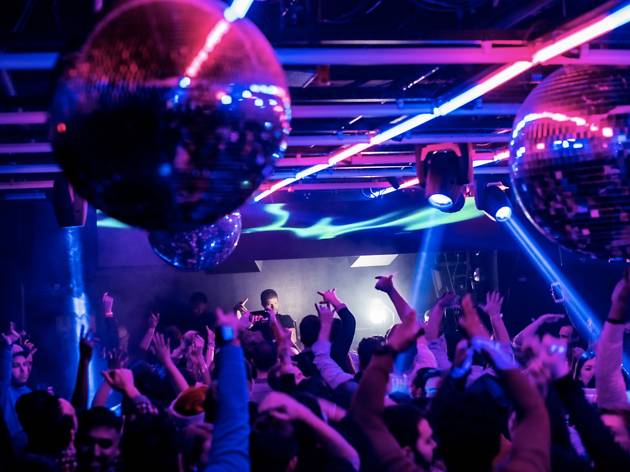 Center City’s marquee dance club Rumor, a multi-room space decked out in neon lights that pulsates from state-of-the-art speakers, celebrates the new year with a five-hour premium open bar and collection of Top 40, hip-hop, house and mash-up DJs. Celebrations culminate in a free champagne toast at midnight. Heads up, big spenders: A variety of VIP options gain you bottle service, access to the “Vault” area and, in some of the pricier packages, reserved seating. 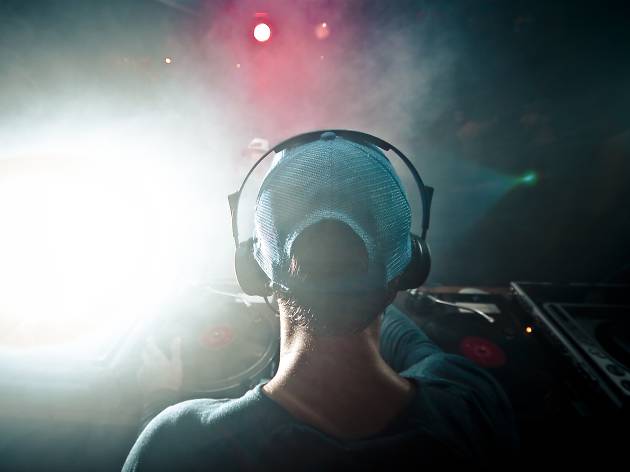 The spacious 12,000-square-foot Field House—certainly big enough to not feel so sardine-packed while you toast at midnight—lets patrons get down with a five-hour premium open bar and tunes from a DJ spinning the best of the ’80s, Top 40 and hip-hop. A whopping 35 TVs on-site make it easy to see the Times Square ball-drop as you indulge in a champagne toast or sip on a number of drafts: wheats like the Neshaminy Creek Punkless Dunkel, Belgians like the seasonal Funk White Christmas, and spicy brews like Troegs’ Master of Pumpkins. 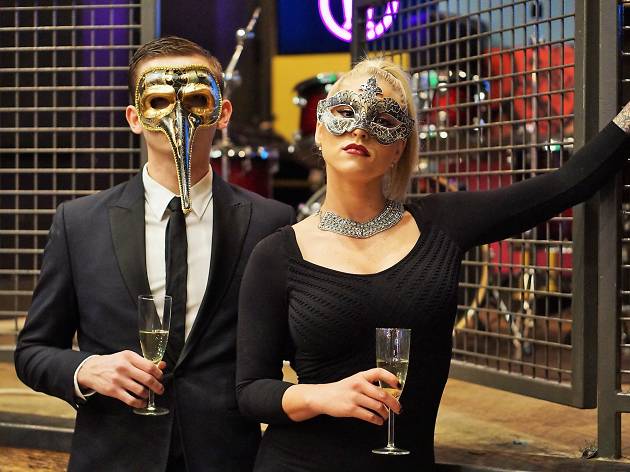 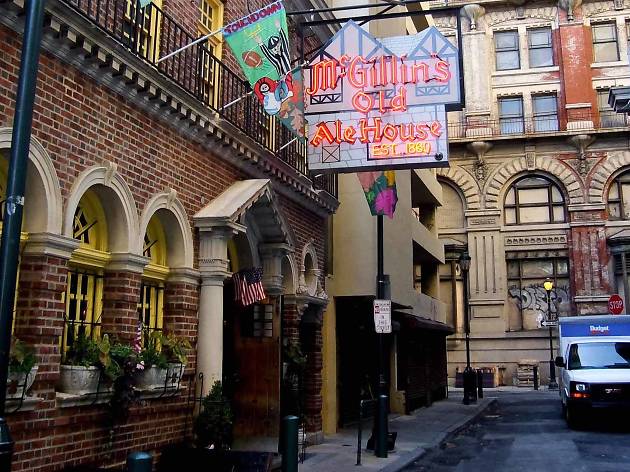 New Year’s Eve at McGillin’s Olde Ale House, the city’s oldest continuously operating tavern, kicks off with a modest cover charge of $5 that grants in-and-out privileges all night. DJ Johnny Drama spins a set list of pop, hip-hop and old-school funk at 9pm. At the bar, find 30 beers on draft—with an emphasis on local breweries like Yards, Flying Fish and Stoudts—and pitcher specials. 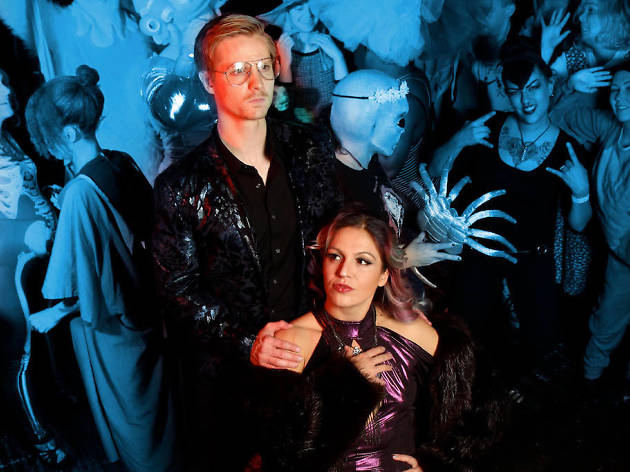 With Burlesque Ball at Tabu Lounge & Sports Bar, Gayborhood event hosts HoneyTree EvilEye and Flirt Vonnegut promise a sass-filled and sexed-up New Year’s Eve experience centered around a performance by local drag and burlesque stars. After the curtain closes, a DJ spins till 2am while you get sloshed on the bar’s $6 Ketel One drink special. 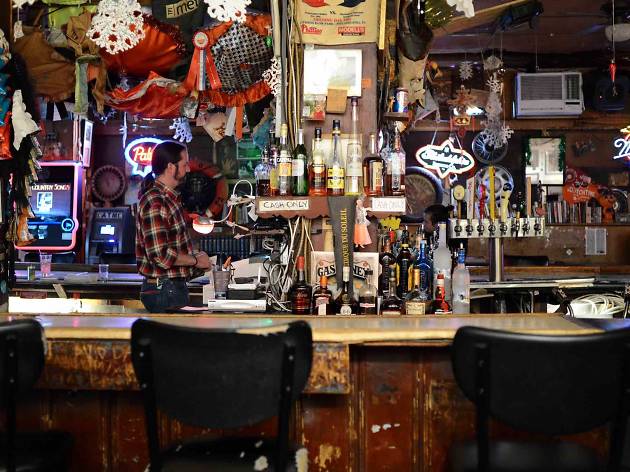 Though Dirty Franks is better known for its New Year’s Day mummer’s bash, when revelers pop in starting at 9am to pregame for the day’s parade, its gloriously cover-free festivities the night before are just as fun. Show up promptly at 9pm for free noisemakers, freely pouring libations and rowdy tunes cranking out of the jukebox. Champagne and sparklers come out when the magic hour hits and everyone gathers around the TV to watch the Times Square Ball drop. 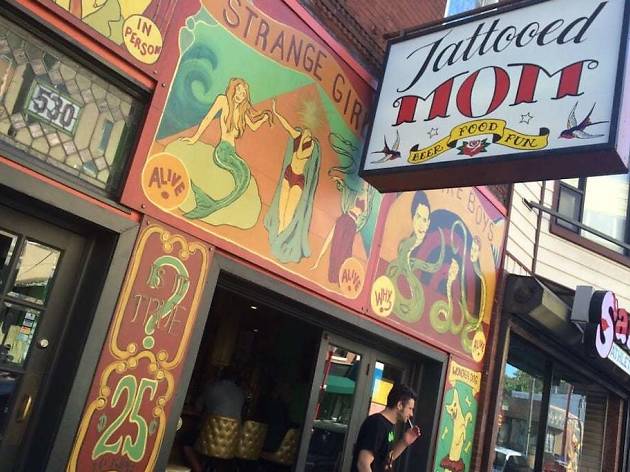 Tattooed Mom, the coolest bar on South Street, welcomes partygoers into its graffiti-laden space for a cover charge of $0—making it one of the cheapest ways to bring in the New Year in town. Guests on a budget can also drink half-priced drafts from 10 to 11pm and get free NYE swag, including a complimentary limited-edition postcard made by a local artist that you can send to friends to wish them well in 2018. 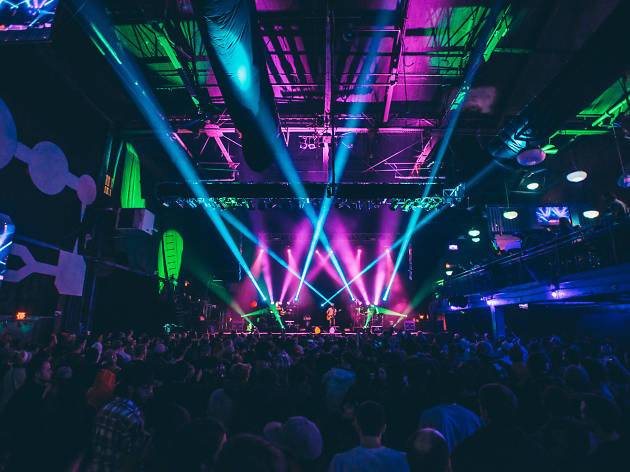 Electric Factory welcomes cover band Dark Star Orchestra into its approximately 3,000-person-capacity music venue to rock the first hours of 2018 with the sounds of the Grateful Dead. Get down to a whopping three sets of Dead faves and rarities, and fuel up on special offerings at the bar, such as a host of Tröegs Independent Brewing seasonals and an Electric Factory Anniversary ale. 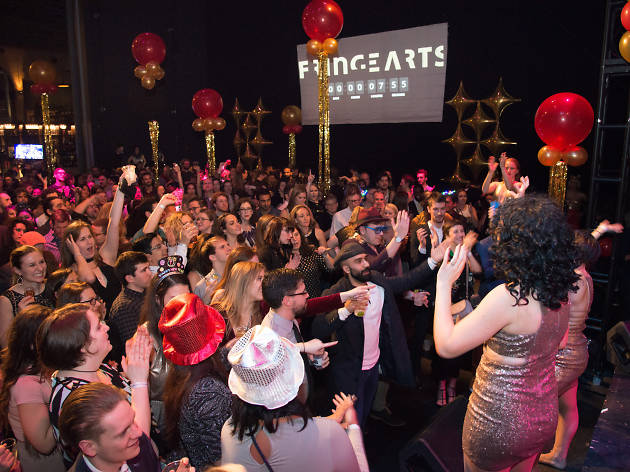 For its funk-focused NYE bash, FringeArts adorns its spacious bar and performance space with balloons and fire pits. Bust a move on the dance floor to energetic South Philly hip-hop act ILL Doots and DJ Dame Luz, and hit the cash bar to choose from a limited menu from La Peg that’s available till closing time. 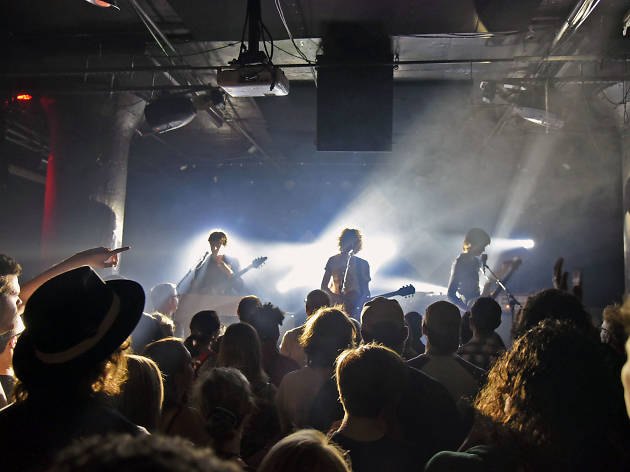 The sexy, subterranean performance venue Underground Arts brings together a megadiverse but equally energetic lineup of Philadelphia musical acts that will have you dancing way after the ball drops. On the roster is Balkan-inspired brass band West Philadelphia Orchestra, 10-piece “absurdist soul” act Johnny Showcase & the Mystic Ticket and funk-soul group Red 40 & the Last Groovement.

Where to eat on New Year’s Eve in Philadelphia 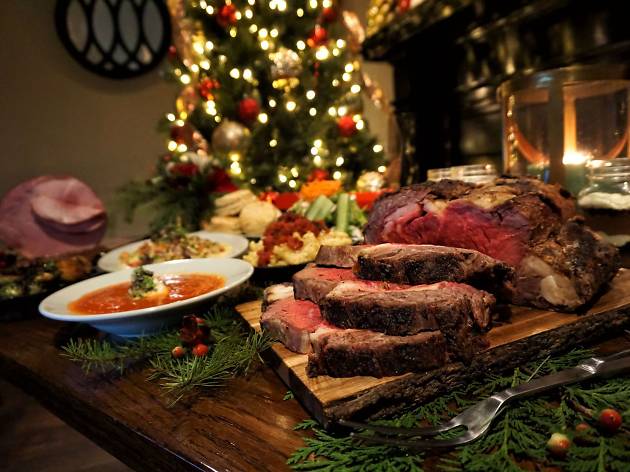 New Year’s Eve is an all-day affair inside The Little Lion, the sprawling Old City bar and restaurant that’s tucked inside an ornate 19th-century bank building. The buzz begins at 10am with a pay-as-you-go boozy brunch, though the highlight of the day comes a little later, when the luxe prix-fixe champagne-cocktail dinner rolls out. The four-course spread features specialty bubbly drinks and decadent food like lobster, potato fondue, sweet-potato gnocchi, pork roast and lemon cheesecake. 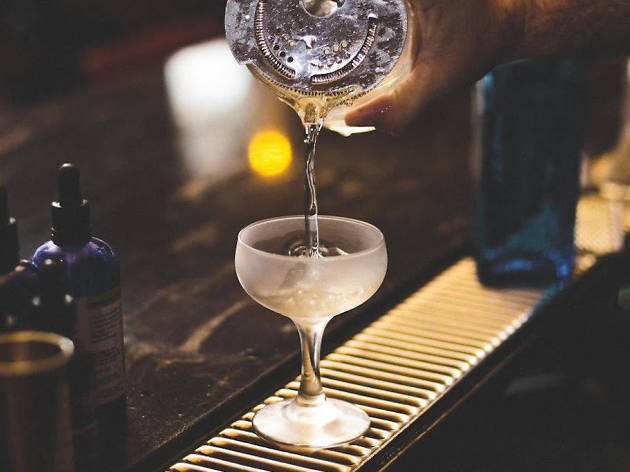 While the rest of the city parties hard, Square 1682’s mission is to offer a relaxing, sophisticated and food-driven New Year’s Eve experience. The five-course pre-fixe menu features filet mignon, halibut and light appetizers paired with wine and cocktails for an upcharge. A DJ will also start spinning closer to midnight, with a toast of champagne flights in the warm glow of the restaurant’s interior. 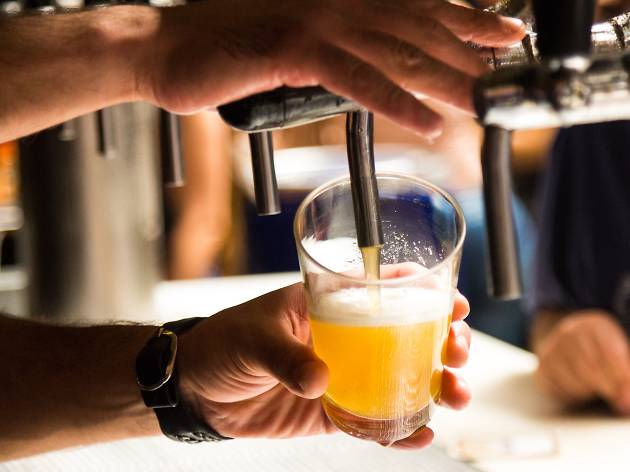 Touting schnitzel and tinsel, Brü fills its German Bier Hall with a buffet of hors d’oeuvres and a sea of pints, offering a five-hour open bar with a complimentary midnight champagne toast. A DJ will count down to midnight; at that time, expect the bar to collectively shout “Prostit Neujahr.” Translation? “May the new year turn out well.” 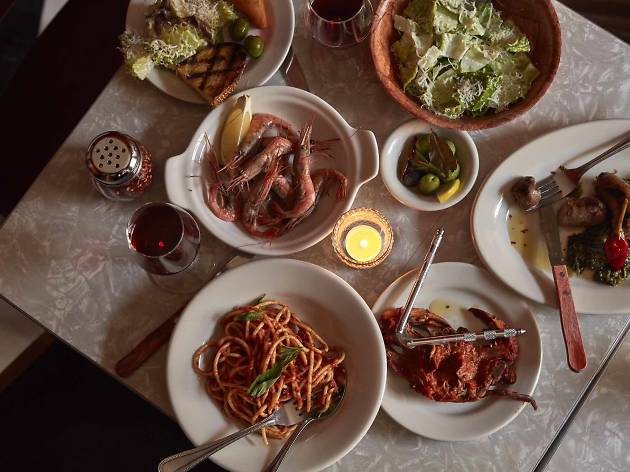 Make reservations at one of the best restaurants in Philly

Top restaurants across the city roll out special New Year’s Eve menus that, while pricey, afford the you the chance to ring in 2018 over an almost guaranteed deliicous meal. Need help finding a spot? Check out our guide to the best restaurants in Philadelphia. Just be quick; these spots are bound to fill up quickly. 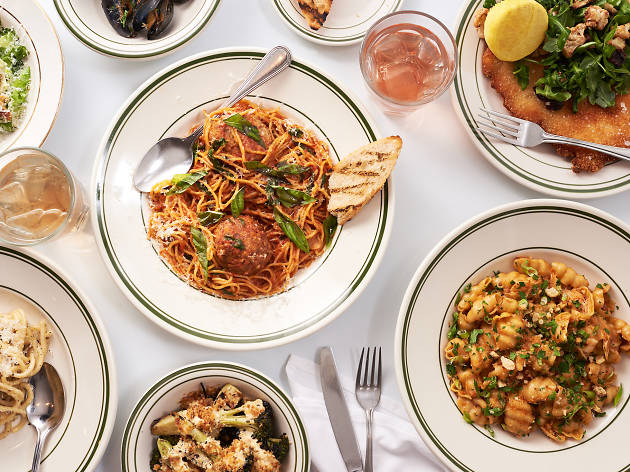 Check out some of the best new restaurants in Philly

Those looking for a more low-key—and cheaper—experience could check out some of the newer eateries to hit the Philly dining scene over the past year. 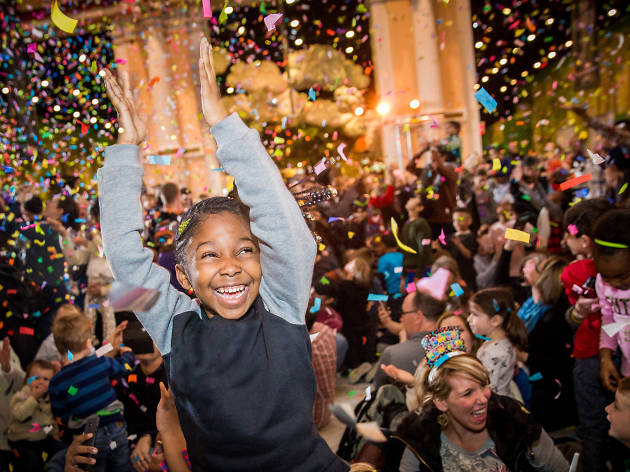 For tired parents and little ones with a strict bedtime, this popular New Year’s Eve bash celebrates the dawn of 2018 with a ball drop at noon and again at 1pm—complete with a colorful confetti shower. Kids can show up well before the magic hour to play in the museum, take a snowflake-making workshop, wiggle to live music and catch live, family-friendly performances all day. 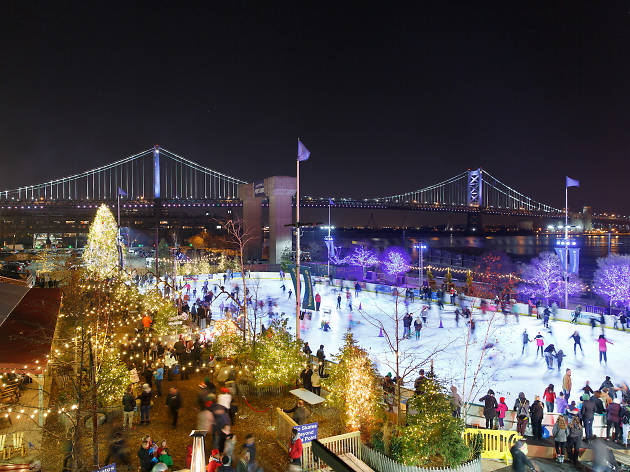 Spend your final hours of 2017 twirling on the ice at Blue Cross RiverRink Winterfest. Attendees can enjoy food and drinks from Garces Group, Chickie’s & Pete’s and Franklin Fountain in the luxe, chalet-inspired Lodge, and then snuggle around the fire pits when the fireworks begin. 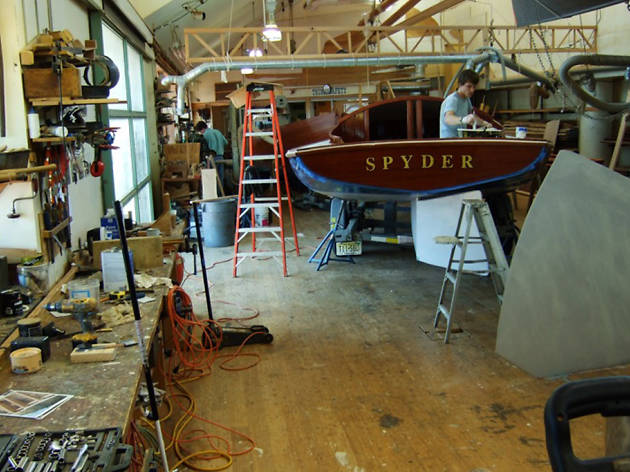 Independence Seaport Museum is throwing a bash on its terrace at 6pm, but advance tickets grant you and the family all-day admission to the museum, which opens at 10am. 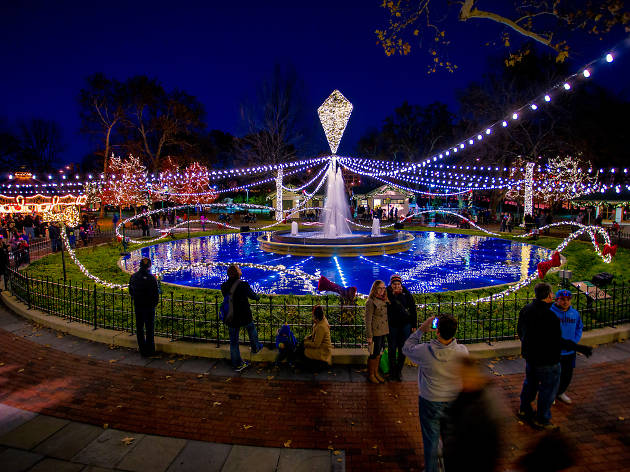 Aside from offering a glorious view of the SugarHouse fireworks at 6pm, this public square hosts a “Kids’ Countdown” dance groove-athon that includes crafts and grub from SquareBurger. For adults, it’s also the last night of the Franklin Square Holiday Festival and Electrical Spectacle, which features a winter beer garden, fire pits, a light show complemented by a “Snowflake Maze” of lights and delights from Ben’s Sweets & Treats tucked inside a heated tent.

Where to see fireworks on New Year’s Eve in Philadelphia 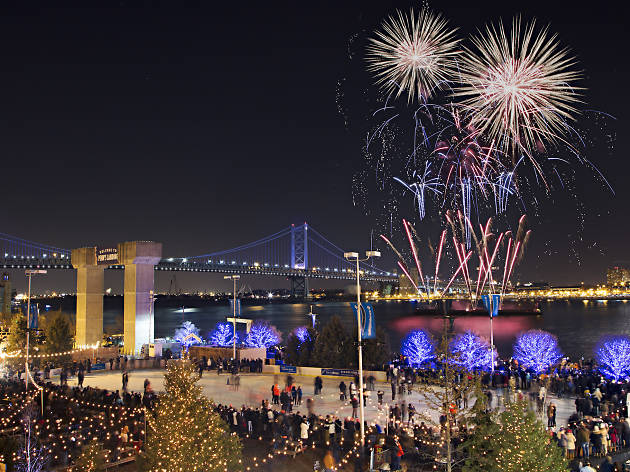 Ring in 2018 twice on New Year’s Eve with not one but two massive firework shows over the Delaware River at 6pm and then again at midnight. Most people congregate along the waterfront—at Penn’s Landing and Blue Cross RiverRink Winterfest—to take in the show, where they’ll be able to hear the soundtrack of catchy Top 40 tunes, EDM and nostalgic jazz classic that accompany the show. But of course, you can see it from almost anywhere in the city. Climb onto a friend’s roof deck, camp out on the stairs of the Philadelphia Museum of Art, or just look up while you’re going about your night. 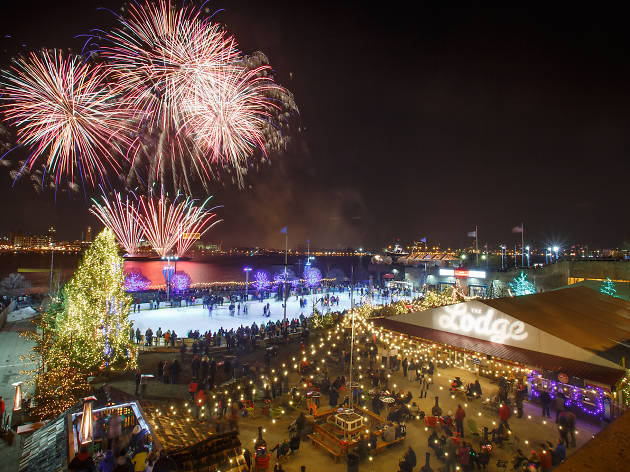 Spend your final hours of 2017 twirling on the ice at Blue Cross RiverRink Winterfest, which is hosting two parties on ice in conjunction with the 6pm and midnight SugarHouse New Year’s Eve Fireworks displays over the Delware River. Attendees can enjoy food and drinks from Garces Group, Chickie’s & Pete’s and Franklin Fountain in the luxe, chalet-inspired Lodge, and then snuggle around the fire pits when the shows begin. Speakers set up on-site blast music that’s perfectly synchronized with the fireworks, so you’re sure to get the whole booming experience. 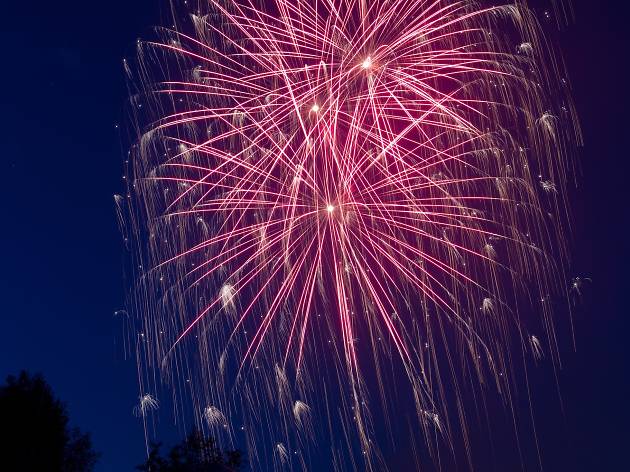 Independence Seaport Museum opens its terrace to offer guests a close-up view of the first showing of the SugarHouse fireworks. The spectacle begins at 6pm with a booming light show over the Delaware River, accompanied by a soundtrack of peppy Top 40 tunes. Advance tickets grant you access to the bash, plus all-day admission to the museum, which opens at 10am. 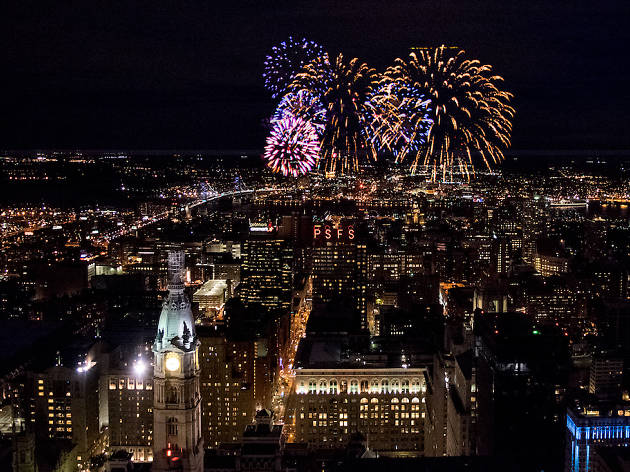 Midnight From the Top

One Liberty Observation Deck hosts its very first New Year’s Eve party in 2017, offering a stunning 360-degree of the midnight fireworks show from 57 floors above the city. Your ticket grants you access to an open bar and hors d’oeuvres courtesy of Craft Concepts Group—the folks behind beer-focused spots like Uptown Beer Garden and Brü Craft & Wurst. There will also be live music and dancing, with DJ Jason Weiss spinning throughout the night. Keep in mind that this is a black-tie affair, so whip out your snazziest threads (no tux required).

What to do on New Year’s Day in Philadelphia 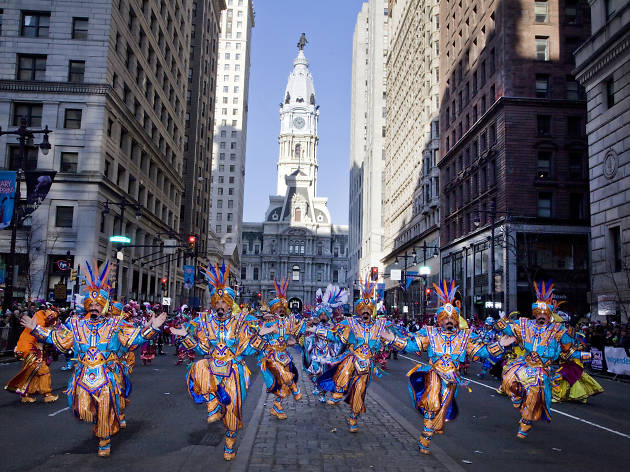 It’s a Philadelphia tradition, when dozens of performers dressed in lavish costumes march down Broad Street. 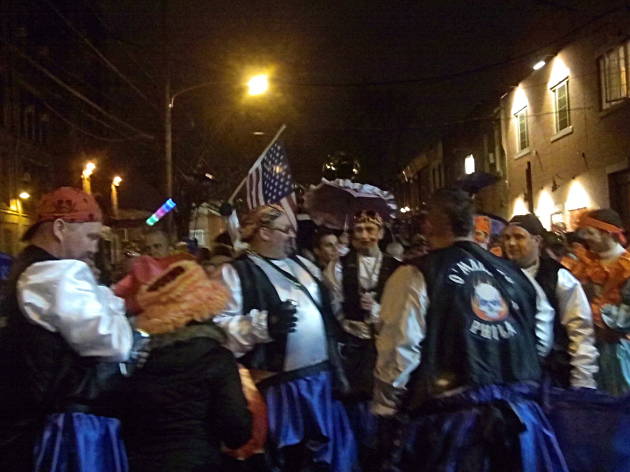 Get rowdy with the mummers after the parade’s over at this wild block party in South Philly.