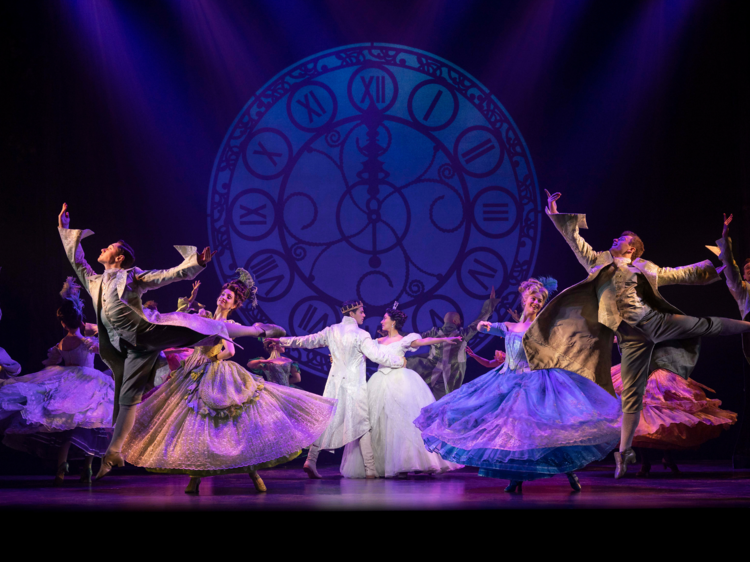 Rodger and Hammerstein’s Cinderella has finally made its debut in Sydney, and it is an irresistible invitation for your inner child to indulge for a few hours into the wonder and magic of musical theatre. In times where adapted movies and theatre performances can feel overdone, Douglas Carter Beane’s take on this classic princess tale is a homage to great storytelling. Audiences will be immersed in a family-friendly and extremely witty performance with the power to win over any watching sceptic or intellectual. Be prepared to be enchanted as the Sydney Lyric Theatre transforms into a medieval kingdom through the work of scenic designer Anna Louizos. You cannot help but suspend your disbelief as Louizos’ backdrop transitions from Cinderella’s house, to Prince Topher’s castle and to the town centre (to name a few settings) in a seamless transition which provides a heightened experience of theatre. It is hard to be able to keep an audience consistently in awe, but the beautiful lighting design of Kenneth Posner manipulates the cool hues of purple, blues and whites throughout the performance, which upholds a sense of marvel and magic throughout the production.   The story sticks to the bones of the traditional Cinderella fairy-tale, where “Ella”(Shubshri Kandiah) lives with her venomous stepmother Madame (Tine Bursill), and stepsisters Charlotte and Gabrielle (Bianca Bruce and Matilda Moran). Upon the ethically ambiguous advice of adviser Sebastian (Nicholas Hammond), Prince Toph 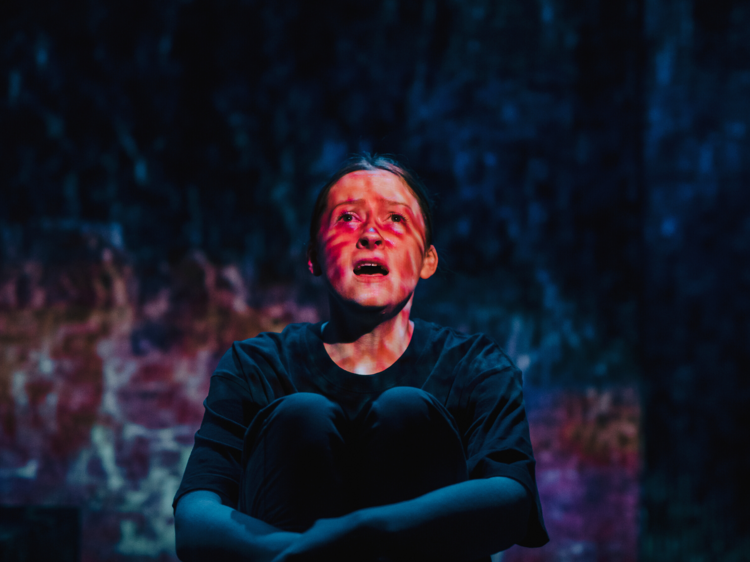 Playwright Julian Larnach describes this play as a “powerful family portrait”, and that is perhaps the best way to frame this performance. This 75-minute play, adapted from Favel Parrett’s novel of the same title, paints a story of three brothers living on the ruggedly beautiful but unforgiving southern coast of Tasmania as they deal with the death of their mother and the presence of their abusive father, an abalone fisherman. The performance begins with a moving monologue on time and memory, which is jolted with a sudden change of scene to the brothers on a boat with their father, working on seas as unsteady and dangerous as their treacherous patriarch. This jarring shift between scenes sets up the theme of the performance - one which, although raw and vulnerable, is albeit, unclear. Director Ben Winspear uses actors Meg Clarke, Ryan Hodson and Griffin McLaughlin in a multiple role performance exploring the brutality of childhood and adolescence. Whilst conceptually this appears to be quite a fascinating choice, its execution falls short at times, leaving the audience uncertain about who is playing which role. This comes at no fault of the actors, who provide a strong emotional range. It is in the central moments of tension that the audience can find its bearings, and we are provided the luxury to be completely immersed in the battles that brothers Tom, Harry and Miles face. Without throwing around too many cliches, it would be an understatement to say you could hear a pin 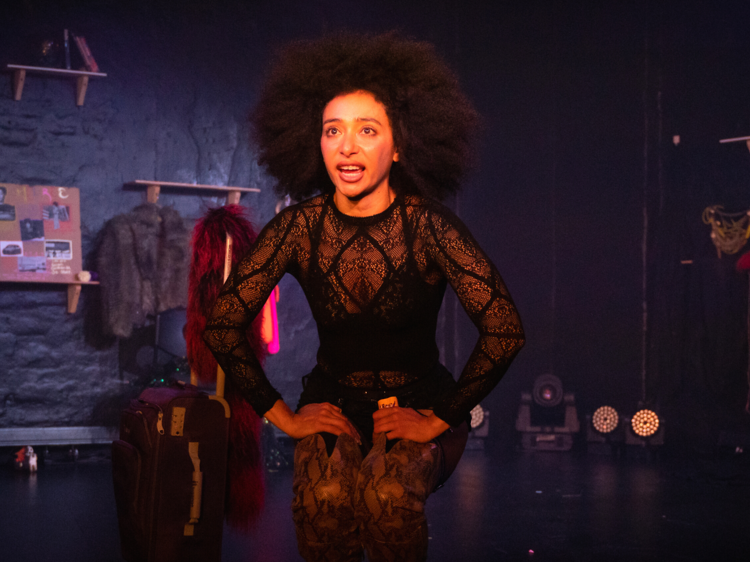 Be sure to leave all expectations, assumptions and “colonial constructions” (as performer Mel Ree aptly puts it) at the door. This 65-minute poetic performance is a demi-biographical tapestry woven from the multifaceted nature of trauma, memory and belonging.  From the moment Ree enters on the blacked-out stage, crawling into a small, hunched position, there is a looming and overwhelming presence felt. Even when reduced to a fetal position, Ree establishes her command of the stage and makes you realise the opportunity to view her performance is a rare privilege.  Ree’s control throughout the performance blurs the boundary between Mel Ree the performer and Mel Ree the persona. Ree expertly reels the audience in – as she  confronts the  abuse and loneliness of her past, you are unable to look away, implored to relive it alongside her.  Blessedly, the timely execution of self-deprecating humour provides a light touch of  comedic relief. Ree’s witty one-liners, breaking of the fourth wall, and choreographed movement (from the guidance of the skilled choreographer Fetu Taku) all colour this profound exploration of a troubled adult with an inner child who simply wants love.   There is a seamless integration of the tribulations of trauma into  everyday life. Ree personifies the concept of memory, allowing the audience to meta-theatrically observe and experience the mind of a person who has suffered through hardship, leading us through a stream of consciousness which goes from happil 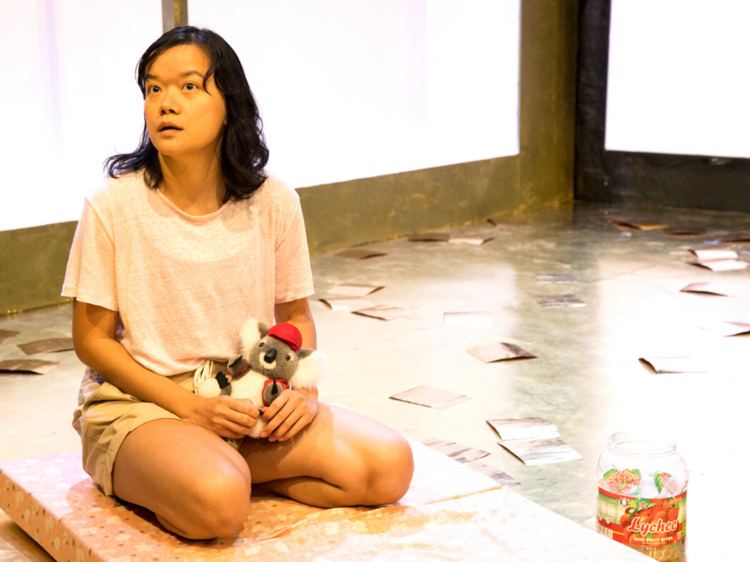 Far from the macrocosmic cityscape of Singapore, Golden Blood, a two-cast play, begins with an awkward encounter between Girl (played by Merlynn Tong, who also wrote the play) and Boy (Charles Wu) in Girl’s apartment. The distorted dynamic parallels an uncomfortable first date filled with tension and formalities, only for us to discover that this is not a date, but a reunion of two estranged siblings. Drawing loosely from Tong’s own life, the story begins after Girl and Boy’s mother dies. Twenty-one-year-old Boy visits Girl, who is seven years his younger, offering to become her guardian. The siblings very quickly interpret the number seven as the Chinese symbol of both good luck and bad luck – a subjective duality that director Tessa Leong deconstructs throughout the show, which also spans seven years of their relationship. The 14-year-old Girl is a wide-eyed teenager, often seen clutching her toy koala, who dreams of becoming a veterinarian in Australia with a feverish reverence. After some convincing, she is excited to sign off for Boy to become her legal guardian. He promises to make them both rich. Girl’s passion and enthusiasm is supplemented with a softness and vulnerability which Tong at times draws out a little too dramatically. Girl appears too juvenile for her age, however what Tong lacks for Girl in her youth she brilliantly compensates for in Girl’s seamless evolution as a 16, 18 and eventually a 21 year old. The depth of Tong’s Girl is evident in the consistent