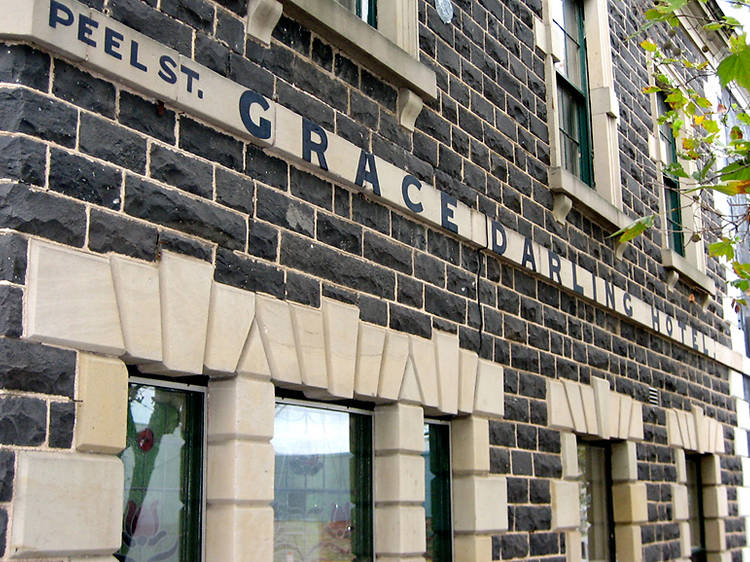 While its modish disco-and-pizza sister venue Lazerpig generates steady buzz down the road, the Grace is a member of the old guard, still boasting on-point garage punk bookings in the upstairs bandroom along with a perennially attractive happy hour deal of $7 Coopers pints between 4-6pm each day. In the warmer months, the outdoor tables lining the Smith and Peel corner bustle with creative types kick-starting their nights into gear. When winter strikes the sprawling front bar becomes a mix of suits swilling knock-off pints, and smatterings of young couples on dates. The menu is exactly what you’d expect from an old boozer – steaks and burgers – but they’ve nudged the food offering up a few price points with the likes of an O’Connors dry aged sirloin with porcini sauce (an additional $3), and a vegan butter curry featuring mild Masala spice, in the cashew-creamy sauce dotted with tofu dumplings and crisp onion. Even onion rings won’t leave you with much change from a tenner, though they rank highly on the fired snack scale,  especially after a dip of Sriracha mayo, and they don’t leave you feeling like you need an oil change when you’re done. As one would expect from a watering hole with credentials like the Grace, the bar features taps with locally sourced brews filling the lines, like the crisp, citrus-tinged Forrest Silvertop Kölsch alongside Coopers Pale Ale and Mountain Goat Hightail. Sometimes it can feel like a rural retreat, especially in the aviary dining area, candl 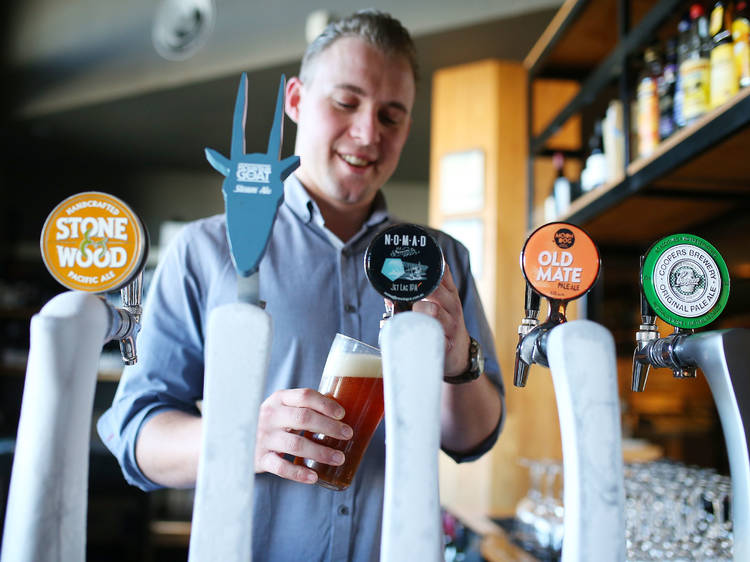 This St Kilda pub is a little bit classy without betraying that warm pub welcome you want when drinking by the bay While the humble drive-thru bottle shop is a fixture for countless legacy pubs across the land, the version affixed to this Brighton Road mainstay is the first indication you get that the Grosvenor Hotel is not like the other pubs. The bottle-o isn’t simply just a bottle-o – it’s also a grocery store stocked with high class comestibles, ranging from sriracha cheddar to cuts of Gippsland beef. And if you don’t fancy cooking your own beef, the vivid burger street art is also a sign-post for the adjoining St Kilda Burger Bar, whose buns are available to collect from the comfort of your ride. All this, and we haven’t even set foot inside the venue yet. This is not a packet-of-crisps-in-a-bowl kind of place. A glass meat safe in the main entryway proudly showcases cuts of Victorian beef as it undergoes a weeks-long aging process, signalling the venue’s reverence for red meat. The bistro provides a quiet dining environment for more reserved punters who like this pub for its upmarket atmosphere. To the right, the main bar caters to a younger crowd. There’s live footy on the screens overhead and a repertoire of acoustic pop covers constitutes the live music offering. Staff are decked out in crisp aprons; there’s a comprehensive wine list leaning on steak-friendly domestics like Barossa Valley shirazes and Yarra Valley pinot noirs; and our scotch fillet arrives with the 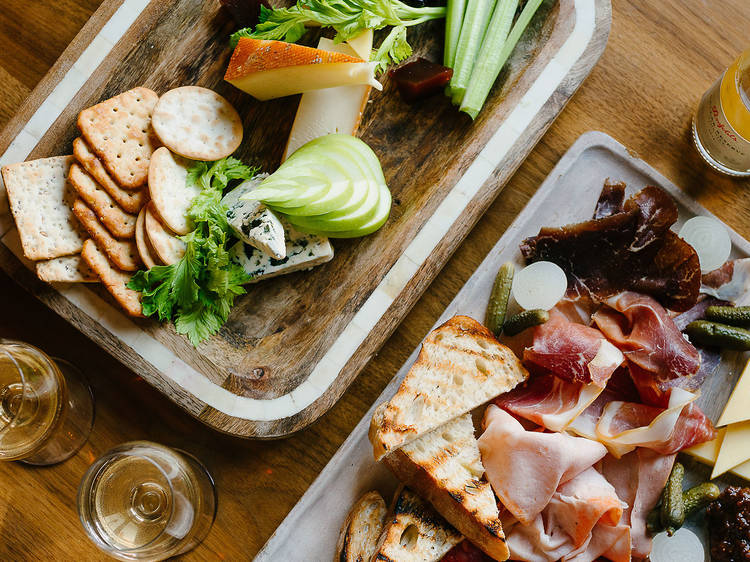 The exterior of this Hawthorn East mainstay has a commanding, fortress-like presence along the skyline as you approach via its namesake road. Inside the Auburn, however, you’re greeted with a pristine warmth akin to an upmarket country pub. Big screens populate most walls, with bar staff more than happy to accommodate requests for background music to be subdued in favour of blaring commentary. The elegance of the connecting wine room permeates a touch of class into the front bar, carried over into the immaculately presented, astro-turf-lined beer garden. Both the bar menu and the tap beer range feel as if they’re the cream of the current crop. Longstanding champion Asahi neighbours the crisp, trendy Geelong ale Furphy occupying the row of taps along with Little Creatures Bright Ale and Boags Draught. Iberian chorizo shares menu space with chicken wings in a tamarind sauce. To use the football term du jour, the bar menu has depth. The best gameplan is to bring a crew and share snack options.  Proudly operating since 1888 (with a stint as the Geebung Polo Club), the Auburn pulls off a classy demeanor while never feeling anything short of a welcoming to sports fans. 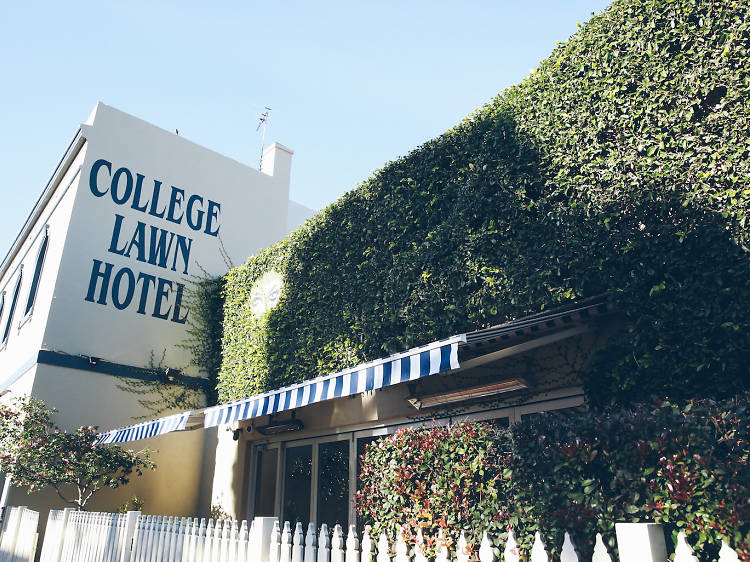 If the primary indoor bar at the College Lawn were empty, chances are its oval shape could make for a serviceable small running track for the modestly athletic. The bar is long enough to house a variety of sports-viewing clusters, spaced out enough so rowdy factions don’t encroach into quieter clusters. You might find a group of vocal gents grasping pints of Little Creatures Bright Ale and Heineken endand young families at the other while their toddlers bop to the live cover band setting up for the final bounce. A more traditional sports pub setup can be found tucked away in the front wing of the building, serving the needs of those looking for big screens above your head and no-frills draught beer on tap. Plus there are facilities for a flutter, if you’re that way inclined. The busiest area of the pub is invariably its sprawling beer garden, with a dedicated bar screening the game on each angle of the corner setup. When it’s wet weather footy conditions in Melbourne, the beer garden will keep you warm and dry while you yell “BALL!” at the screen to your heart’s content. 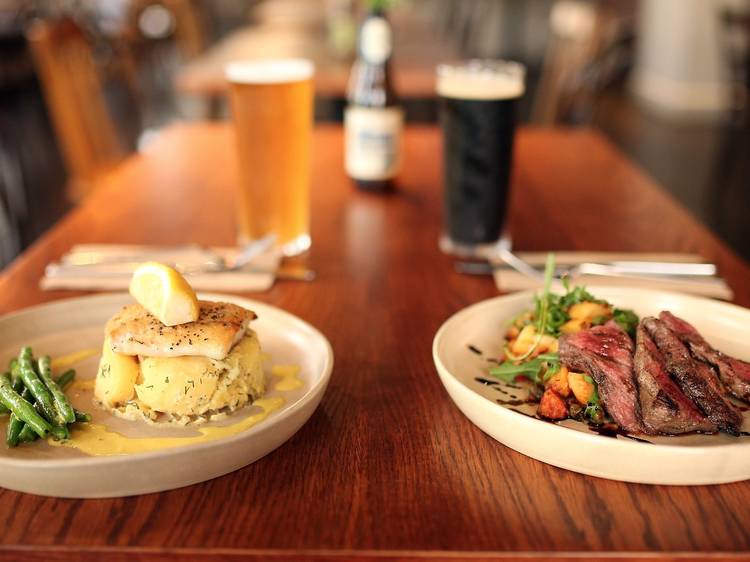 When it comes to sports-watching culinary fare, baked camembert with sourdough isn’t exactly up there with chips and pies in terms of classic footy tucker. It does, however, provide a pleasing break with tradition to delicately apply cheese and quince paste to bread in between bouts of intense game viewing. With a full selection on tap from the on–premise James Squire Brewhouse, the share-plate menu also features local, yet distinctive, choices of crocodile sausage rolls and emu meatballs. There are beer-tasting paddles offering a sample of six brews for $15, and chances are you can taste-test a variety of sporting codes at any one time during your visit, too. While all Australian leagues get their due airing across the venue’s big screens, the CBD pub has established itself as one of the most attractive destinations for EPL fans. The championing of the round-ball code even extends to E-sports, with one screen dedicated to an ESPN broadcast of a tournament of FIFA’s video game incarnation during our visit in the same room where two AFL matches are being shown live on adjacent walls. All bases are covered here, catering to passive sports fans and your fervent local fan clubs with equal hospitality. 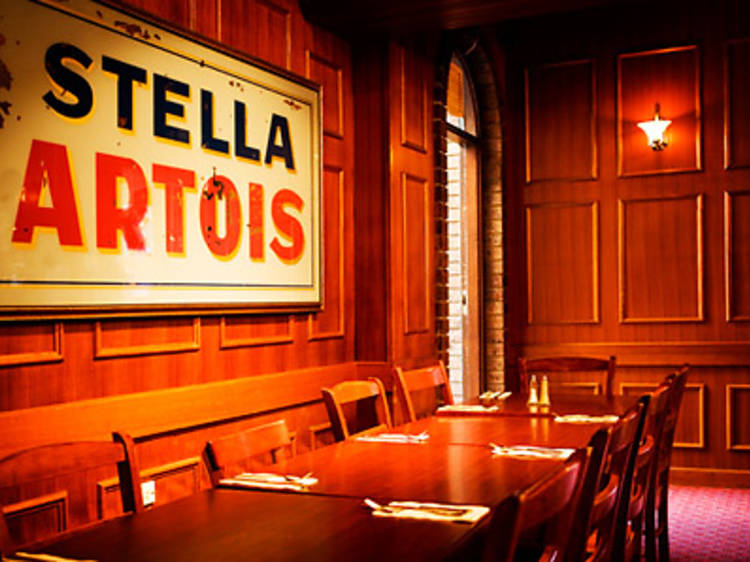 If footy is a religion, The Great Northern Hotel is its mega-church. Nestled away in the Inner North, this sprawling sports pub has a well-earned reputation as the premier destination for locals and visitors alike to watch the game. The main dining area can feel like mission control during the crossover between dinnertime and the match, thanks to a massive, wall-spanning screen. Bodies spring up to roar success, while groans of despair rumble under the celebrations. If the main event isn’t to your liking, a bit of table real estate can be claimed in the pup-friendly beer garden. Ask for the telly to be changed to whatever match you’re after and chances are staff will be happy to accommodate. The Great Northen might be within walking distance of Carlton Football Club’s Princes Park heartland, but a variety of teams are represented via paraphernalia on the rare wall space not occupied by a telly. A framed poster of Freo gun Nat Fyfe stretches out in one corner; a Doggies scarf hangs on the bar as a relic of last year’s hectic Grand Final scene. They also treat their tap list like a coach treats their starting line-up a rotating selection of new and seasonal ales and pilsners, including full ranges of Stone & Wood, 2 Brothers and Moo Brew. If the range of craft beers is too intimidating, there’s always the trusty pot of Carlton waiting for a call-up. 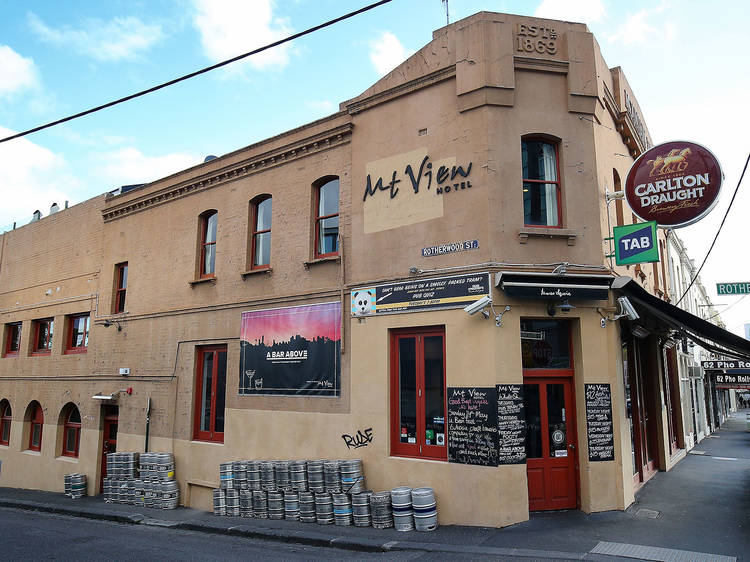 You see it in the immediate lead-up to any game. Swarms of fans decked out in their team colours flow through Melbourne’s streets towards that night’s colosseum – usually the ‘G or the neighbouring AAMI Stadium. You could power entire suburbs with the nervous energy generated in the lead-up to bounce and sometimes the nerves get too much and a few pre-game pots are in order. Or maybe you just need a meeting place before venturing out into the fray? Situated plum on the Bridge Road thoroughfare, the Mt View Hotel is Melbourne’s perfect sports hub. There’s a large ground-level bar featuring a sea of big screens. The only risk while dropping in before a game is getting too comfortable – the atmosphere of the nearby stadiums is palpable here and it’s easy to feel as if you’re already under the MCG stands. Just above the bustle of the street below, the two middle floors have a laidback offering of pool tables and more TVs primed for a decidedly more relaxed viewing, but the jewel in the Mt View crown is its stunning rooftop beer garden. It really does feel like sporting heaven up here. You can see the six famous light towers circling the ‘G, alongside the colourful light-speckled AAMI Stadium – the panoramic view reminds you that you’re in the heart of one of the world’s sporting capitals. The Mt View serves you well as a destination for watching the game on a big screen but it works best as a place to kick off, or cap off, your match-day experience. The fans flow by to watch thei