Find the best places to eat, drink, shop, and play in Fisherman's Wharf and Pier 39.

There’s more to Fisherman’s Wharf than souvenir stands and clam chowder. From the rich history to the oddball museums to the stunning views of the Golden Gate Bridge and the San Francisco Bay, this waterfront neighborhood is one of the most popular attractions in the city. Shop in Ghirardelli Square, sample beers at the San Francisco Brewing Co, and ogle sea lions on Pier 39.

How do I get to Fisherman’s Wharf, SF?

What are the most popular attractions in Fisherman’s Wharf, SF?

Ghirardelli Square is the wharf’s central marketplace, lined with shops and restaurants. You can taste dozens of flavors of chocolate at the Ghirardelli Chocolate Shop, originally founded in the 1800s. The restaurants along the Wharf’s piers are known for fresh seafood sourced straight from the bay (some fisherman even sell straight from their boats). The Musée Mécanique showcases antique musical instruments and arcades, while the Maritime Museum revels in San Francisco’s nautical past. Several historic vessels are docked nearby. Pier 41 is also a ferry hub, where you can board a boat for a day trip to Sausalito, Tiburon, or Angel Island.

SS Jeremiah O'Brien (located at Pier 45) is one of a fleet of  World War II ships known as the Liberties; it’s named after the first American to capture a British naval vessel during the Revolutionary War. Of the original 2,750 Liberties in existence, only the Jeremiah O’Brien and one other remain. During the war, this ship shuttled between London and Normandy carrying troops and supplies for the D-Day invasion. It was restored to its original glory in 1979 and docked in San Francisco. The relic remains fully seaworthy and takes cruises around the bay several times a year. The rest of the time, it’s moored at Pier 45 and open to public tours.

Things to do in Fisherman's Wharf, San Francisco 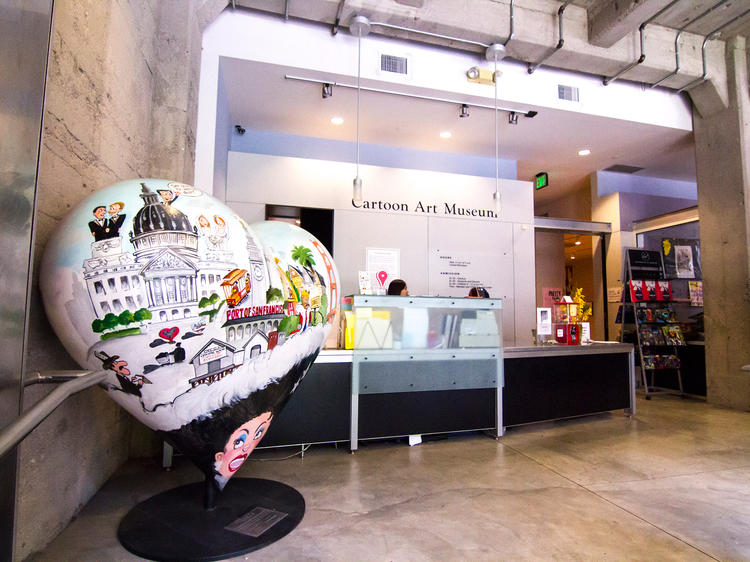 Originally founded in 1984, this petite but well-appointed museum displays a slew of comic art, including comic strips, comic books, anime, political cartoons, graphic novels, zines, and underground comix. The museum relocated to this waterfront location in fall 2017, which affords nearly 8,000 square feet of exhibition space, as well a screening area, a library, and a collections facility. Visitors can browse everything from early Disney and Warner Bros. stills to obscure graphic art from around the world. The museum houses nearly 7,000 works in its permanent collection, including the work of illustators like Roz Chast, Robert Crumb, Wally Wood, Edward Gorey, and Chuck Jones. Tables stationed around the space are stocked with drawing utensils for adults and kids to create their own comic art. 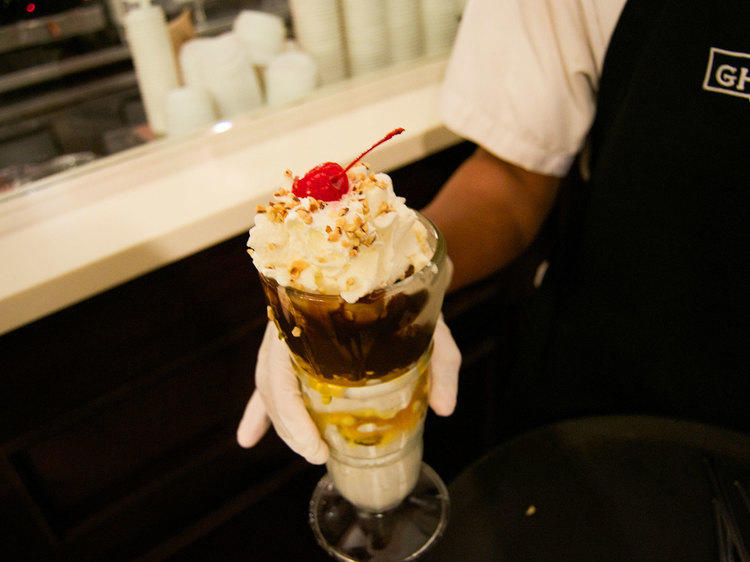 Ghirardelli chocolate has become ubiquitous at grocery stores and candy shops throughout the country, but it all began here. Italian confectioner Domenico Ghirardelli opened his first shop, Ghirardely & Girard, at Kearny and Washington Streets in 1952. In 1983, Ghirardelli moved his manufacturing into the Pioneer Woolen Building, the present site of the landmark Ghirardelli Square. Today the spacious, sweet-smelling chocolate shop and ice creamery is filled with chocolate of all kinds, from bars to hot cocoa to chocolate-covered nuts and fruit. You can sample more than 2 dozen flavors of Ghirardelli chocolate squares at the shop, including pumpkin spice caramel, dark chocolate bourbon, chocolate blueberry, and dark chocolate sea salt caramel. The ice cream shop serves decadent sundaes themed after San Francisco landmarks—topped with Ghirardelli hot fudge, of course—as well as shakes, malts, and cones. 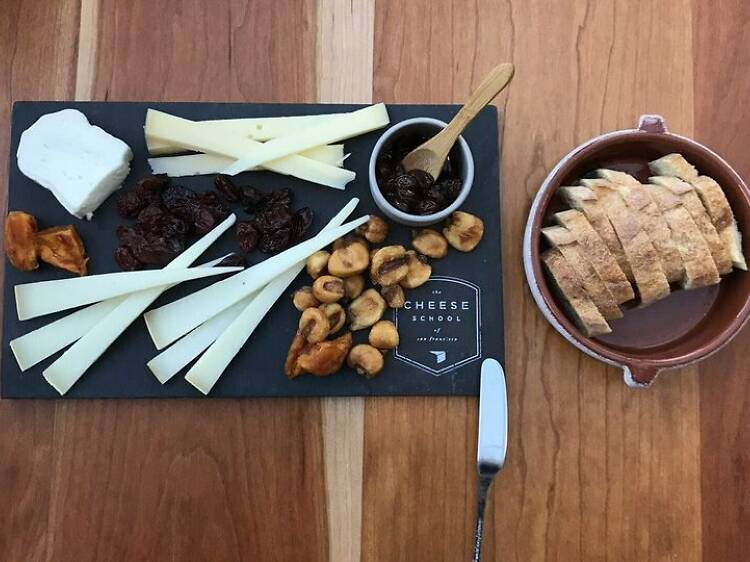 The Cheese School is a cafe, event space, workshop, and cheese shop all devoted to the fine, pungent art of fromage. (Their motto: “Eating is learning.”) The school relocated from the Mission to these digs beside the Ghirardelli arch in fall 2018. The new space is roomy and rustic, with views overlooking the bay. Classes are taught by cheesemongers, cheesemakers, cheese shop owners, sommeliers, and local gourmands. The offerings run the gamut, including cheesemaking, pizza making, and special pairing classes like Cheese & Chardonnay, Cheese & Chocolate, and France vs. Italy. Unsurprisingly, the adjoining cafe specializes in cheese-centric dishes like grilled cheese, mac and cheese, and cheese plates. 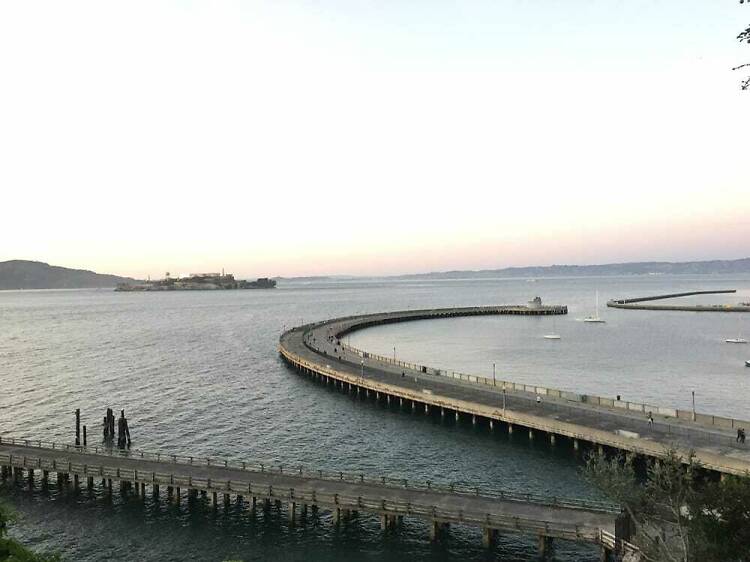 Aquatic Park is a swimming spot for the truly bold. Hardy, speedo-clad clubs plunge into the surf year-round, braving often frigid temperatures and (occasionally) nipping seals. The swimming area spans about a mile in perimeter; a lap out and back is about a ⅓ mile. The best known swimmers hail from the Dolphin Club, a members-only swimming and rowing club originally founded in 1877 with a storied old clubhouse just off the cove. If you can finagle an invitation inside, it’s an impressive throwback, filled with old black and white photos, a boat workshop for restoring wooden boats, and a sauna for beating the post-swim chill. The club hosted its first Golden Gate group swim in 1917 and its first swim to Alcatraz in 1960. Today the tradition lives on in all its goose-pimpled glory. 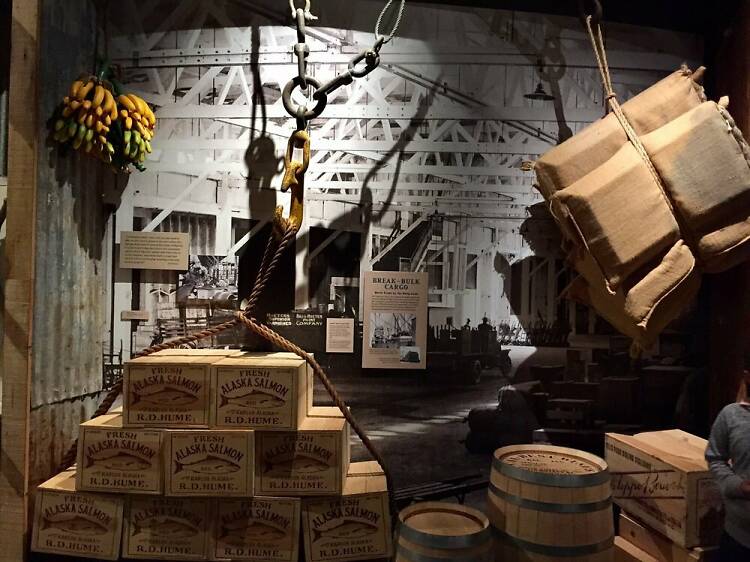 Photograph: Yelp/ May A

This free museum is located in the Aquatic Park Bathhouse Building, a 1939 structure designed to look like an ocean liner. Inside, the historic landmark showcases vivid 1930s murals by Sargent Johnson and Hilaire Hiler. The collection features all manner of nautical relics, from wrecked fishing boats and 19th century photographs to scrimshaw and knotwork. Walk a few blocks over to Hyde Street Pier to view the Balclutha, an iron 1886 sailing ship that sailed between England and the US in the late 19th and early 20th centuries. 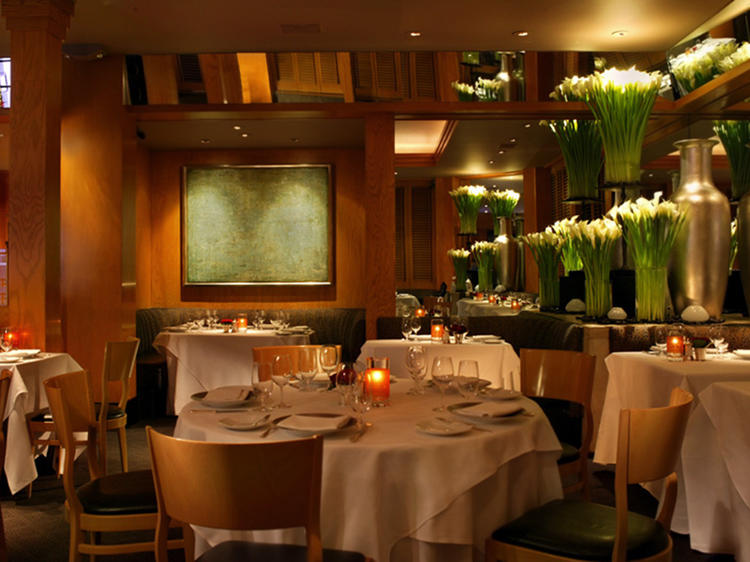 This Michelin-starred restaurant exudes Old World elegance, from the extravagant orchid floral arrangements to the rolling cheese cart. Chef Danko opened his namesake spot in 1999. Despite its rich history, the emphasis over the past two decades has remained the same: French cooking married with inventive, locally sourced ingredients. The food is high-end—caviar and black truffles are menu staples—but the preparation is classic, from seafood to meat and game birds. The extensive wine list includes a selection of by-the-glass offerings, including an array of old and rare Madeira. Order a la carte or spring for splurge on the five-course truffle tasting menu ($228). 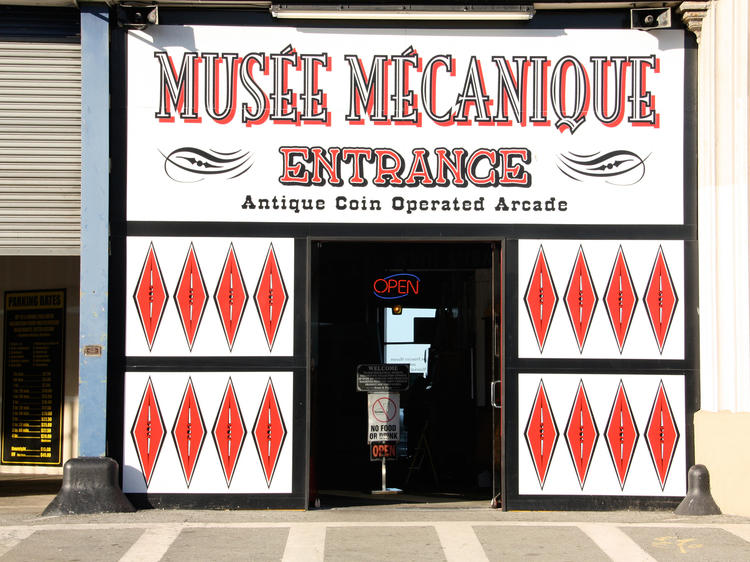 Local legend Edward Galland Zelinsky founded this museum as a showcase for his unparalleled collection of antique oddities, namely coin-operated mechanical musical instruments and antique arcade machines. It’s a must-see for vintage lovers and history buffs. The assortment spans more than 300 items, including coin-operated pianos, antique slot machines, hand-cranked music boxes, salvaged bits of local history, a steam-powered motorcycle, and various vintage arcade games. The arcades are all in working condition and can be played—most cost $.25 or $.50 apiece 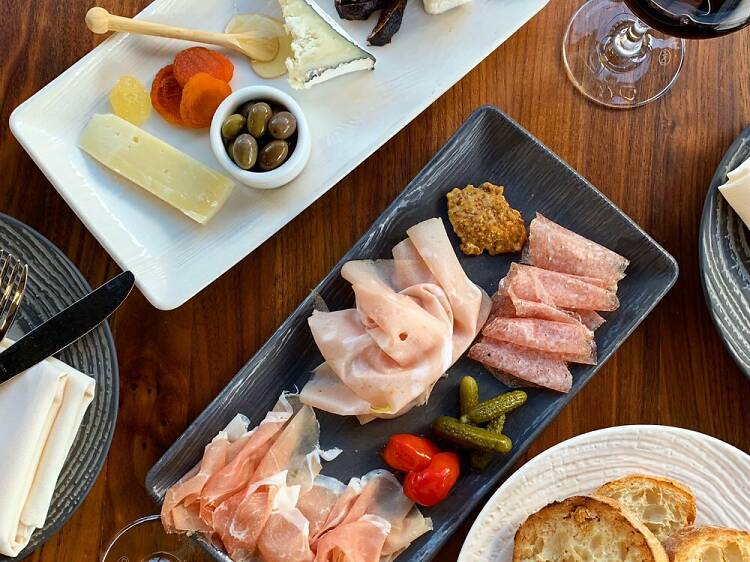 This sunny, civilized corner spot is a welcome reprieve from the Wharf’s dated chowder houses and tourist traps. The wine bar and full-service deli is run by AJ and Amanda Sanchez, the same couple behind Carmel Pizza Company on Jones Street. The menu spans salads, bruschetta, panini, cheese and charcuterie, and sandwiches; the wines hail from France, Italy, Spain, and—of course—California. (Glasses are half-off during happy hour, which runs every weekday from 5pm to 7pm.) Wood-fired pizzas can also be ordered from Carmel Pizza Company. The art is in the dough, made by hand daily using only yeast, Antimo Caputo 00 flour, water, sea salt, and Sanchez’s secret starter recipe. Save room for the house-made cannoli, filled to order with sweet ricotta and topped with roasted pistachios. 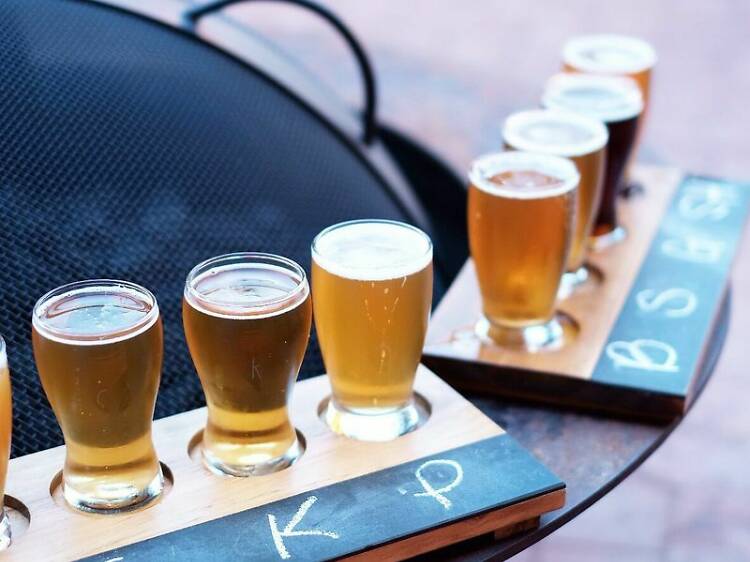 Josh Leavy founded this craft brewery in 2012 alongside his wife and brother. He expanded into a 12,000-square-foot taproom and beer garden in the historic Cocoa Building in spring 2018. Though the space is enormous, the mission remains focused on small-batch, seasonal, locally-brewed beer. Leavy hired former Gordon Biersch brewer Justin Boehle to oversee beer production and tasked BCV Architecture with the design (the same firm behind icons like the Ferry Building Marketplace and Oxbow Public Market in Napa). The result is inventive brews in a stunning space adorned with rustic timber beams and decorative tile. Inside, you’ll find foosball, ping pong, and TVs galore; outside, the garden is dotted with fire pits. If you’re undecided, check out the self-serve draft system, which lets hopheads sample one-ounce tasting pours of anything on tap via a prepaid RFID card. 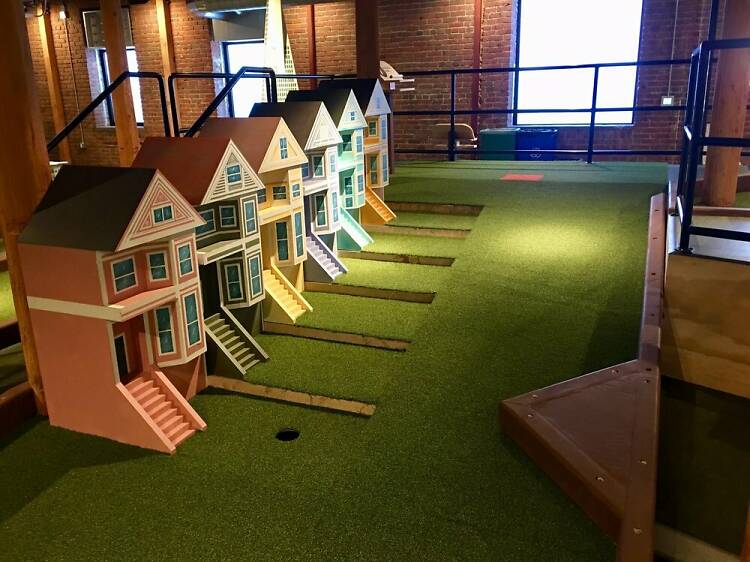 Subpar was a beloved Alameda mainstay for years before taking over this 6,000-square-foot space in summer 2018. The indoor mini golf course features 18 holes themed after Bay Area landmarks. You’ll putt your way around miniature models of the Painted Ladies, the Ferry Building, the Palace of Fine Arts, Alcatraz Island, and more. Every hole is handmade by owner Michael Tusk and his band of local collaborators. After sinking your final putt, the spot also has pinball machines, skeeball, arcade basketball, air hockey, and an outdoor area with bocce and lawn games. Show up on Friday or Saturday after 7:30pm to experience glow-in-the-dark golf, complete with light-up golf balls and glow stick accessories.