And step back and re-examine some of the best Star Wars characters before heading out to Rogue One: A Star Wars Story hitting theaters soon. By Tom Huddleston (Time Out London)

Has a cultural phenomenon ever inspired such devotion, such passion, such—for want of a better term—extreme nerdiness than the Star Wars saga? From the films to the figures, the tie-in novels to the TIE-fighter  coffee mugs, the blogs to the chat rooms to the international fan conventions, it’s the closest thing cinema has to a unifying faith. Exactly why this should be is unclear, even to those of us who worship at the shrine of Skywalker—but we reckon a lot of it has to do with the characters of Star Wars. They can be intensely heroic or irretrievably evil. They can be alluringly human or repulsively alien. Remote and robotic or cuddly and cute. But the characters in Star Wars are endlessly fascinating. A note to the nerds: with one notable exception, these characters are all drawn  from the official six-film canon, rather than the novels and console games of the “expanded universe.” 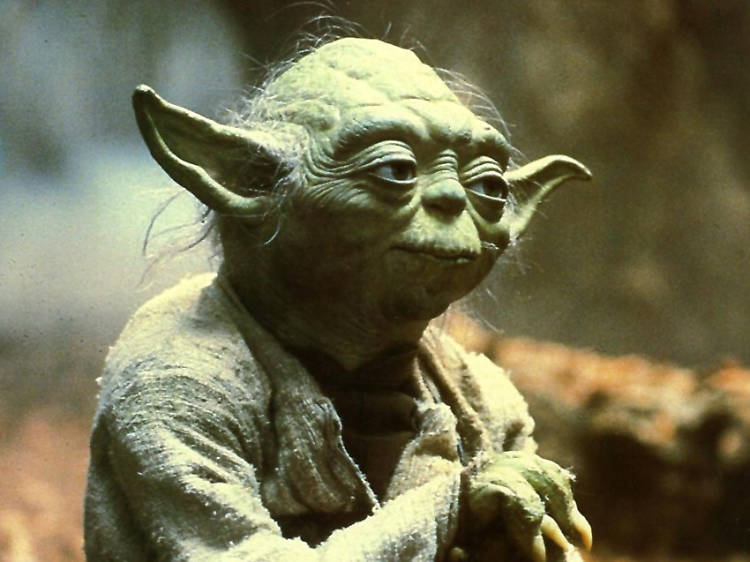 Who is he?
The diminutive backwards-talking mystical muppet whose knowledge of the Force is second to none. In the original trilogy he’s a marvel of creature design: tactile, sympathetic and loveable. His CGI incarnation in The Phantom Menace looks like a rubber troll sprung unnervingly to life, though this does improve somewhat over the next two movies.

Why do we love him?
You have to ask? He’s Yoda! Eight hundred years old and still going strong, master of telekinesis and Eastern philosophy, a whizz with a  lightsaber who also has a wicked sense of humor and an odd  fascination for pocket flashlights. Everything about him is iconic: that idiosyncratic manner of speech (part aging Jewish comedian, part inscrutable Samurai warrior), that unique raspy voice (supplied by Frank Oz, so the similarity to Miss Piggy is understandable), the amazing puppet work, even the really-not-soterrible CGI in the last two prequels (the way he bounces off the walls during the lightsaber battle is amazing).

Seen in
All six movies except Star Wars 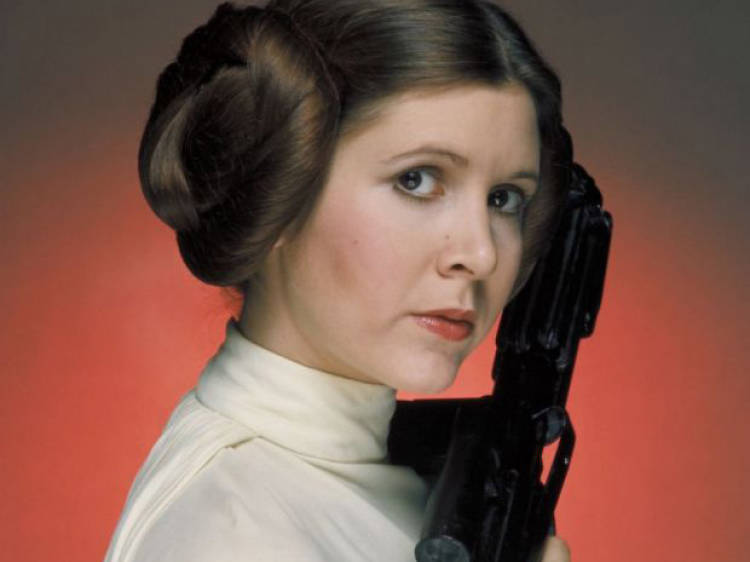 Who is she?
The proud, upraised face of the Rebel Alliance: a beautiful, sarcastic, blaster-packing, manjuggling, no-bullshittaking, Danish-pastryhaircut-wearing icon of womanhood—for two movies, at least. That whole gold bikini incident in Return of the Jedi may have dented her feminist credentials ever so slightly, but at least she got to throttle Jabba the Hutt for it.

Why do we love her?
When we were little, Princess Leia was the last action figure we’d want to unwrap on Christmas morning. Then, as adolescents, she became a bit more (ahem) interesting. As grown-ups, we can look back and  realize that Leia is actually the most shaded, complex character. As the only eligible female in several light years, she clearly gets a kick
out of playing Han and Luke against each other, and refuses to get sucked into any of that mushy stuff (the “just… hold me” episode notwithstanding). She has the quickest mind, the sharpest tongue and, lest we forget, the most money. But she’s willing to risk everything for the cause she believes in. They picked the wrong Skywalker!

Key line
‘I am not a committee!’
Advertising 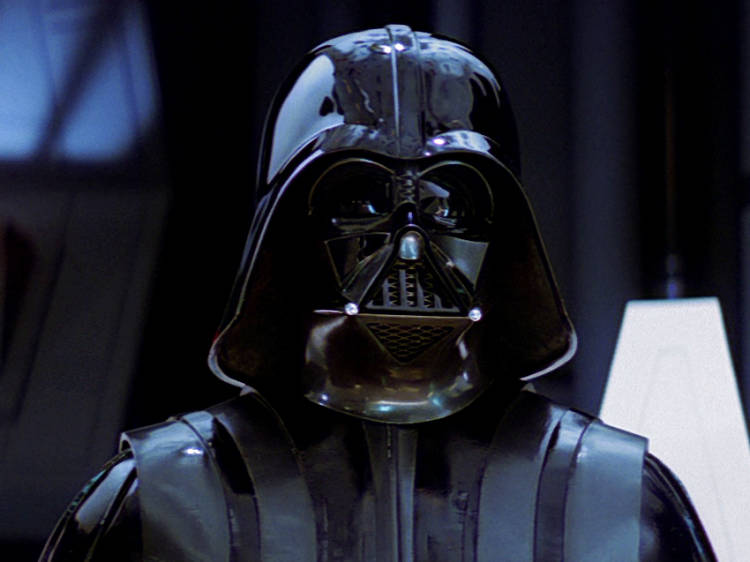 Who is he?
We don’t think it’s going too far to suggest that here is the single most iconic screen villain of all time: his appearance is terrifying, his voice  bone-chilling and his words pure, dripping evil. But what really turns Darth into the stuff of our  childhood nightmares are his actions: from  snapping necks left and right—both in person and remotely—to cutting off his own son’s hand (let’s just let that one sink in for a moment).

Why do we love him?
Because, however much we love them, the movies are full of robot sidekicks and wise old wizards, but there will only ever be one Darth Vader. His backstory is perhaps problematic— the pre-teen Anakin is just a horrid little squirt, while Hayden Christensen’s grown-up  incarnation can’t quite get beyond that terrible dialogue and fully engage as a character. That said, his descent into evil is carefully,  convincingly handled, and the climactic battle between Anakin and Obi-Wan Kenobi is truly, operatically magnificent. He is a perfect  creation, never to be improved upon. Darth, we tremblingly salute you.

Seen in
All six movies

Key line
“If you only knew the power of the Dark Side.” 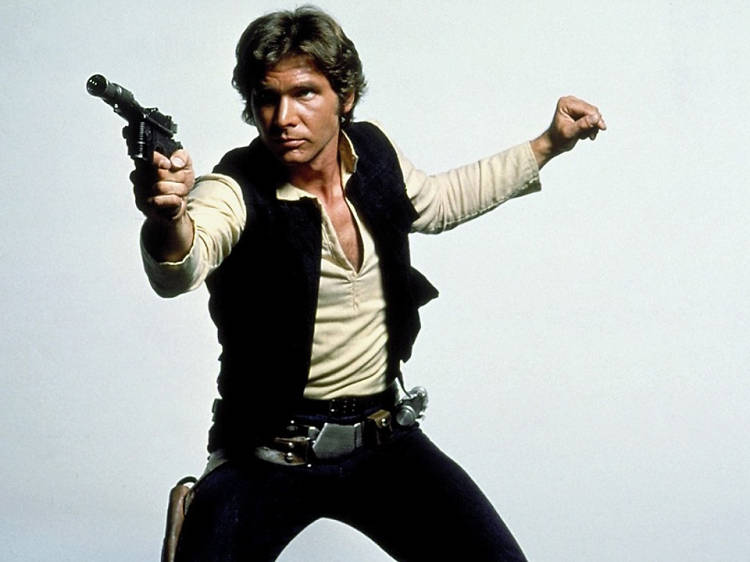 Who is he?
The captain of the Millennium Falcon, and the cockiest space pilot in the galaxy. Han Solo is every young boy’s hero, cruising from star system to star system with his hairy BFF, Chewbacca, getting into  scrapes, shooting the place up and performing occasional acts of
random heroism.

Why do we love him?
Because it’s damn near impossible not to—his hair is great, his Humphrey Bogart-cowboy-hipster outfit is legendary, his wisecracks are second to none and his lopsided grin has broken a million hearts. But
there’s more to it, somehow: in The Empire Strikes Back particularly, Lawrence Kasdan’s crackling, old- Hollywood dialogue combines with Harrison Ford’s evident love of language and sheer insouciance as a performer to raise Han to a place few other movie characters ever reach. This isn’t just another twodimensional figure fluttering up there on the screen, this is someone we know, someone we care about. For thousands of people, losing Han would be like losing a friend. A friend with a really, really cool spaceship. 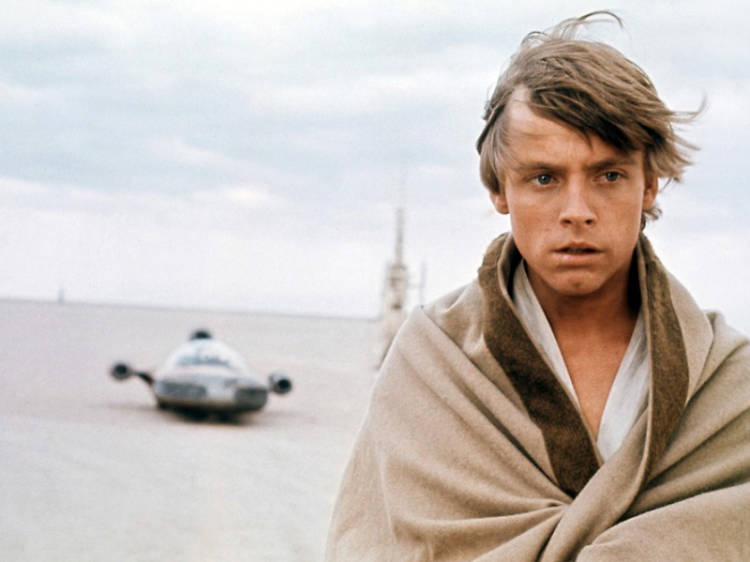 Who is he?
The hero, of course! Luke is the clean-livin’, hardworkin’, elders-respectin’, teeth-whitenin’, sisterkissin’ all- American boy from Tatooine whose adventures form the backbone of the original Star Wars trilogy. Just a simple kid from a broken home, Luke pulls himself up by his own utility belt and goes on to win shiny medals,  master the Force and save the entire galaxy from evil. Score!

Why do we love him?
Because he’s the ultimate family-friendly adventure hero: kind to animals and droids, good at fighting, flying spaceships, swinging  across chasms on ropes, doing the right thing and just a teensy bit bland. There’s a lot in the films about Luke being tempted by the Dark Side, giving in to his hate and choosing the easy path, but never for a second do we believe he’s actually going to do it: hell, he even saves the universe’s most fearsome villain from himself. None of which is intended as a criticism: Mark Hamill’s performance is  consistently intelligent, heartfelt and witty, and Luke never comes close to crossing that line between upstanding hero and annoying  goody-goody.