Written by
Hye Won Kim
Thursday March 24 2016
FacebookTwitterPinterestEmailWhatsApp
Advertising
Jjukkumi season
March to May is when jjukkumi is in season. It puts on weight as it approaches spawning season and is tastier than during the rest of the year. While jjukkumi didn’t used to be as popular as other seafood, such as octopus, these days it is just as loved as any other cephalopod. At Maranghang Port in Seocheon County, which is known for their jjukkumi, a jjukkumi festival is held from March 21st to April 3rd. Often compared to a small octopus because of their similar appearances, jjukkumi has shorter legs and a bigger body, two or three times larger than that of a small octopus. A pregnant female jjukkumi has a round, yellowish head. It is often said that the eggs, which are a seasonal delicacy, resemble rice in terms of their texture and shape. Jjukkumi is a good source of protein, low in calories, helps reduce fatigue and is abundant in taurine, which lowers cholesterol levels. It has two to five times more taurine than octopus, and squid—making it that much more nutritious. It’s often used in shabu-shabu (hot pot) or stirfried with a spicy sauce, but can also be grilled or blanched. 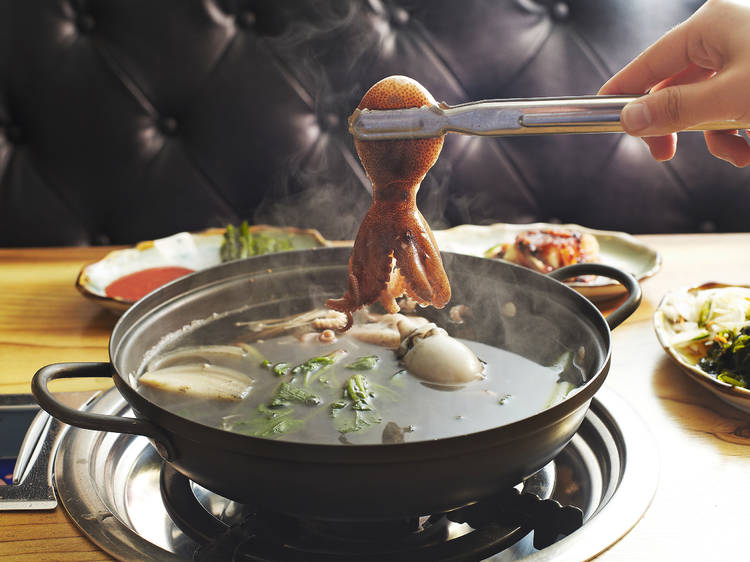 One way to really get the fullest flavors out of jjukkumi is to have it in shabu-shabu. This restaurant specializes in seafood that is in season. From May to November, they offer pike eel and from December to May, you can get jjukkumi, which is delivered straight from the fish market in Incheon every two days. If you order a bowl of live jjukkumi you’ll see its eight legs blossoming open like a flower after you put it into the broth. The boiled jjukkumi is incredibly tender and though the broth may look less appealing due to the ink from the jjukkumi, it has a clean yet spicy taste. Enoki mushrooms and a type of Korean spinach called pohangcho goes well with it. Jjukkumi is filling, to say the least, and if you add some noodles to go along with your meal you’ll be stuffed for the rest of the night.
Read more 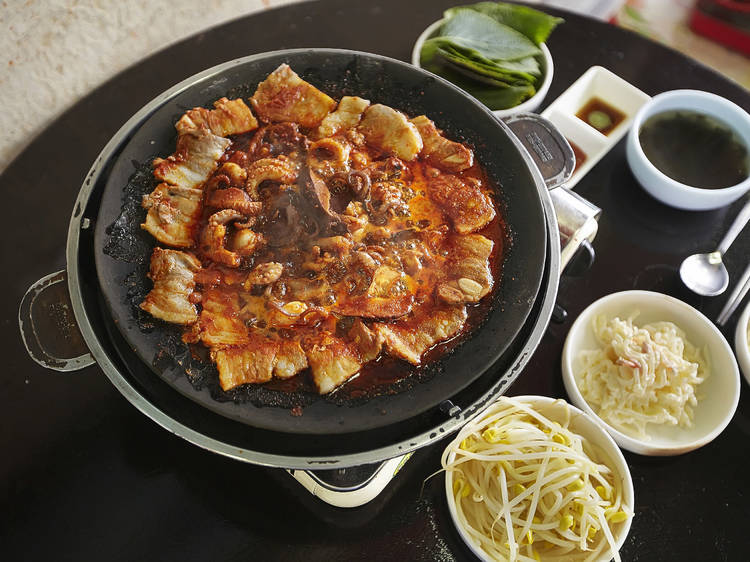 The name “Gyodong” is a combination of the words “Donggyodong” and “Seogyo-dong.” Their main dish is stir-fried jjukkumi and you can add samgyeopsal to it or have it with a bowl of cold acorn jelly. Stir-frying jjukkumi with pork belly enhances the flavors of this dish, as the pork’s fat mixes with the marinade and jjukkumi. Their minimum order is two servings, and they say that two servings of jjukkumi and one serving of pork belly is the golden ratio as more pork means more fat and it often thins the taste of the marinade. Their stir-fried jjukkumi is not overly sweet and is just spicy enough. You also shouldn’t miss out on their fried rice, as the sound of it being cooked on the pan will make your mouth water.
Read more
Advertising 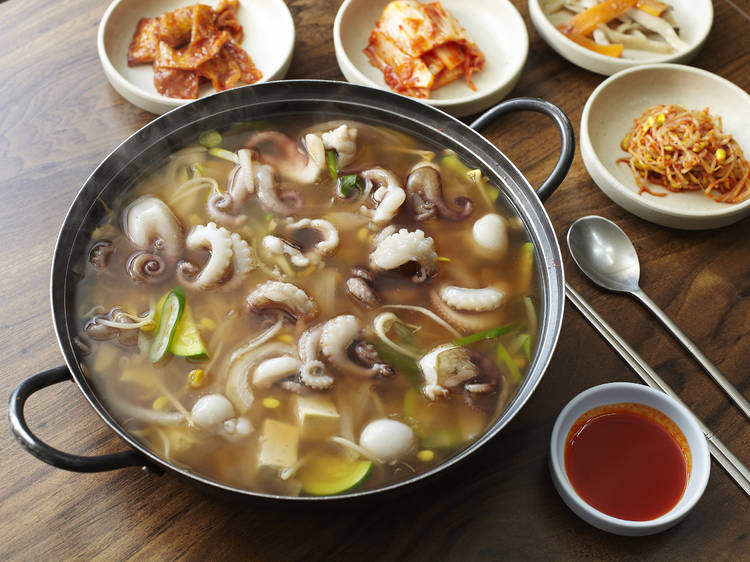 Two generations of a family run this jjukkumi restaurant, which has been around for more than 30 years. With recipes handed down from mother to son, this restaurant, which is always packed with customers during the lunch and dinner hours. It’s famous for their grilled jjukkumi and jjukkumi stew (an item not easily found in restaurants). Ingredients that go into the broth include dried pollack, green pumpkin, bean sprouts, tofu, onion and pepper. The stew goes well with drinks, but it also makes for a great hangover cure. You can add more broth, boil ramen in it and enjoy it in a whole new way. You can also try out their grilled jjukkumi, which is cooked on a steel pan, just like bulgogi.
Read more 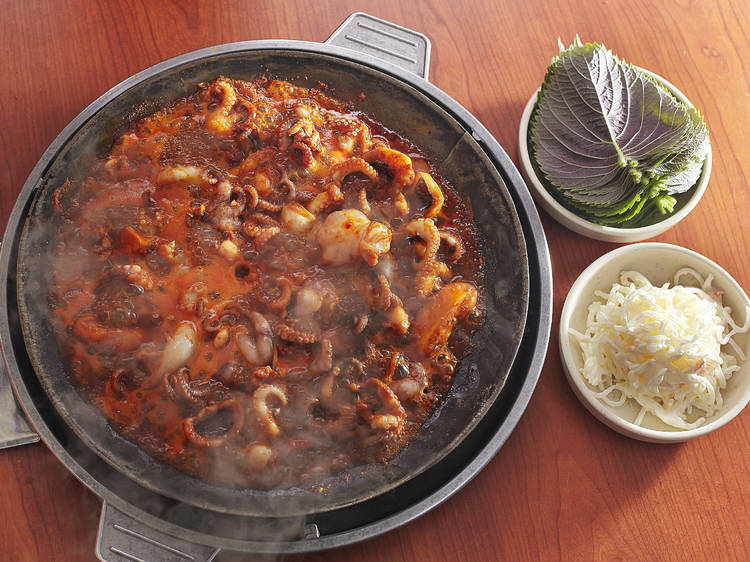 As you walk into this red building, you’re greeted by granny Na Jeongsun. Her restaurant is regarded as the beginning of Yongdu-dong’s jjukkumi alley. When she started selling stir-fried jjukkumi 35 years ago, this neighborhood didn’t have its current cluster of jjukkumi restaurants. Once you sit down, you’ll be served red, marinated jjukkumi and mushrooms without even having to order. Their one and only dish is stir-fried jjukkumi, and they don’t even have a menu. Described as containing nothing special but good ingredients, the restaurant’s spicy stir-fried jjukkumi is addictive. You can enjoy it with sesame leaves and kelp noodles mixed with mayo, which will help ease the fire of this dish.
Read more
Advertising 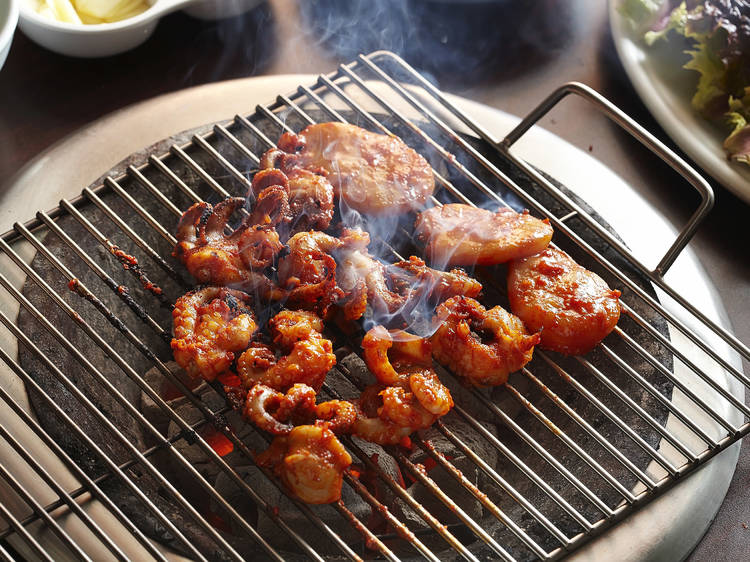 For those hankering for some spicy jjukkumi, head out to Chungmuro. Opened in 1976, this restaurant was the first place ever in Seoul to sell jjukkumi bulgogi. The owner, Jang Young-chil, from Suncheon, got his recipe from his mother. The jjukkumi is marinated in red pepper paste sauce every morning and grilled over a charcoal fire, which accentuates its soft texture. Unlike its appearance, the seasoning doesn’t taste very strong, so if you’re expecting something achingly spicy, you may be disappointed. Pen shell scallops cooked with the same seasoning are also very popular here. We recommend the platter set, which includes both jjukkumi and scallops.
Read more
Show more