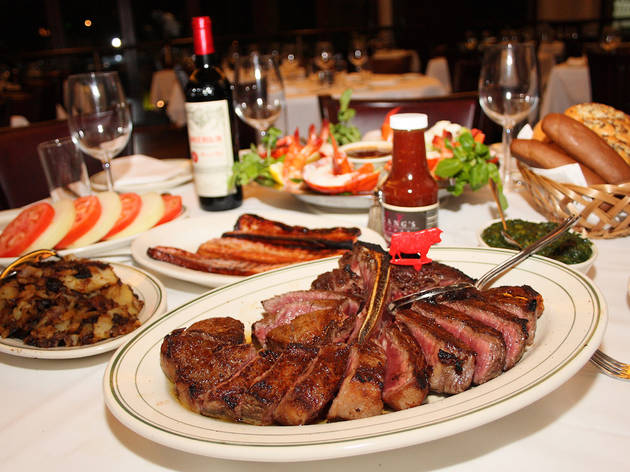 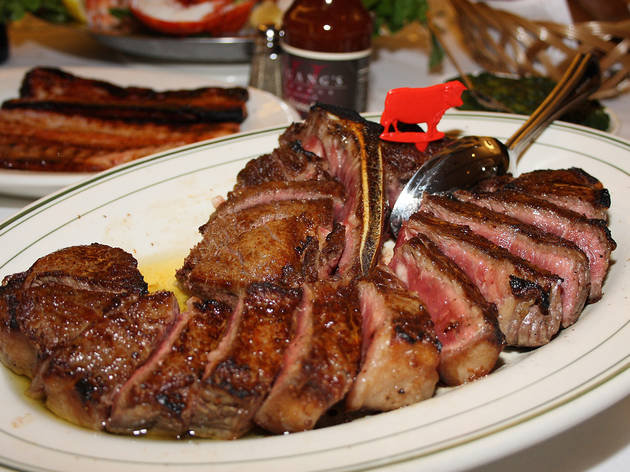 Wolfgang’s Steakhouse opened here in March, bringing fans of the famed New York City venue flocking to its doors. (And yes, it helps that Seoul is really, really into dry aged steak right now.) Inside, you’re transported to New York: every detail has been painstakingly selected to match the original, from the American walnut floors to the chandelier. Compromising neither saltiness, doneness or portion sizes to fit the local market, the flavors are also most definitely American. They’re Korea’s biggest importers of USDA Prime Beef, a grade given to just 2% of beef in the U.S., and extremely difficult to import.
In fact, all of the beef on the menu is USDA Prime, and is aged on-site for 22–28 days, creating a more concentrated flavor than dry-aged hanwoo (Korean beef) which tends to have more marbling. That meat is taken to the broiler, where it sees 871°C temperatures for a hot minute, locking in the remaining moisture, and servers shout “Table 13, sizzle!” as they bring out the meat, surrounded by popping hot butter you can hear across the room. The porterhouse, a Wolfgang classic, is the best (and priciest) steak on the menu. Must-have sides include the thickcut bacon, creamed spinach, and buttery mashed potatoes. It’s the kind of menu that transports you to a time when shoulder pads and Ronald Reagan were in, and the American economy was thriving. All this being said, Wolfgang’s Steakhouse is high-end, but fine dining it is not. Presentation is disarmingly simple. And why not? Wolfgang Zwiener’s story of immigrating to the U.S. and rising through the waitstaff ranks reads like a classic American dream story. Wolfgang’s Steakhouse is a thoroughly American, unpretentious experience—with really good meat. Dinner reservations required, lunch reservations recommended.