Nestled between the Bukchon Hanok Village and Changdeokgung Palace, it may be easy to write off the long stretch that is Gye-dong as a disposable tourist attraction— beautiful and worth seeing, but not worth revisiting. Indeed, the street is jam-packed with tourists with maps in hand, peering curiously at the restaurants with no menus outside and having their photo taken outside Choong Ang High School (a historical institution founded in 1908 during Japanese colonial rule and made famous by the drama Winter Sonata). Filled with residential hanoks and guesthouses at the end of each alley and small shops from the ‘70s, the neighborhood’s experienced a resurgence in interest by the local community recently. Examples of this are Joongang Bath, Korea’s oldest public bathhouse founded in 1969, which was taken over as a Gentle Monster showroom last year, and the fact that the twenty-somethings dressed in hanboks are mostly local Koreans and not tourists. Soundtracks from the cinemas waft onto the streets from bustling cafes themed around arthouse movies, and there’s an ironic sense of nostalgia as giggling schoolgirls dressed in hanboks take selfies with their smartphones in Gye-dong’s alleys. Be it through books, dress, cinema or history, there are plenty of small ways to escape from the everyday here in Gye-dong. It just might be the one tourist hub worth returning to. 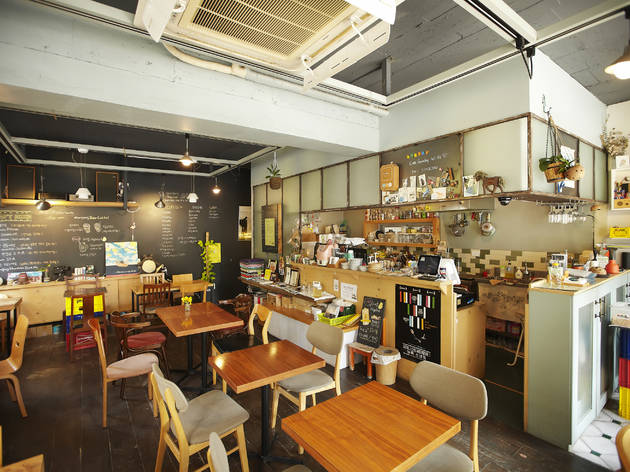 Although Eternal Sunshine of the Spotless Mind may be the most well-known of Michel Gondry’s films, Café Gondry seems to take most of its inspiration from The Science of Sleep. That may be because Kevin Yoon, the café’s owner, was once a programmer at Sponge House Films (an arthouse theater) who brought this particular movie, as well as several others, into Korea. Thanks to Kevin’s background, the café has many directors, such as Hou Hsiao-Hsien and Hong Sang-soo, who come in for casual coffees or to do interviews. The café also serves great lattes during the day and cheesy nachos to pair with craft beer at night. 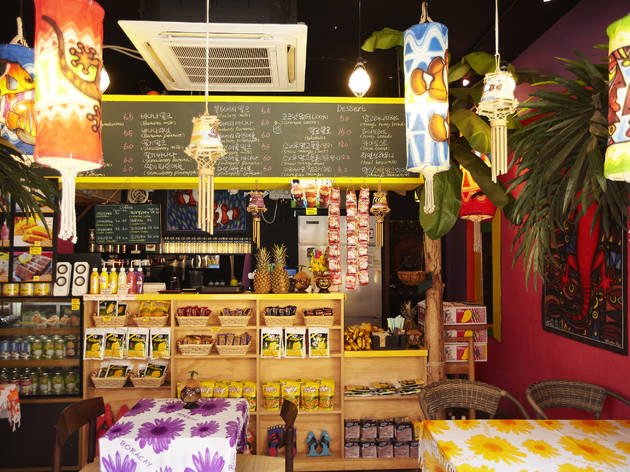 If you’re looking to recapture the feeling of relaxing and having some fresh fruit juice on the beaches of the Philippines, Gye-dong might seem like a strange option. However, much to the delight of many a Pinoy tourist (and fruit juice lover), Mango Rang Philippines Dessert Café opened up two years ago serving everything from Carabao mangoes to Dewberry cookies and a dozen varieties of juices. The sweet and delicious Carabao mango shake, which is made from two whole mangoes and a drop of syrup, is the most popular item right now. 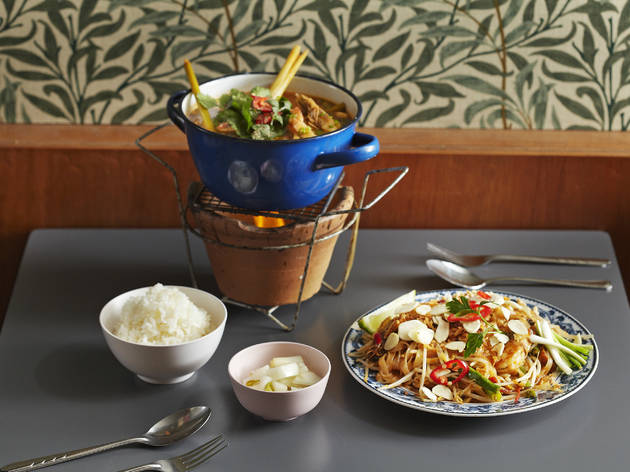 Fans of Wong Kar Wai films just might squeal with delight when they walk into In the Mood for Love (화양연화), a restaurant full of allusions to the Hongkongese director famous for the 2000 film of the same name. From the Tiffany glass pendant lights to movie posters, and a large chunk of pineapple being (in reference to Chungking Express) served with the khao phat kaphrao (Thai fried rice), the restaurant is a lot of fun for Wong Kar Wai film buffs, but perhaps less appealing for those looking for authentic Thai cuisine. Win true fan points and also check out 2046 Pan Steak and Chungking Express, two nearby restaurants also affiliated with In the Mood for Love (and also named after Wong Kar Wai films). 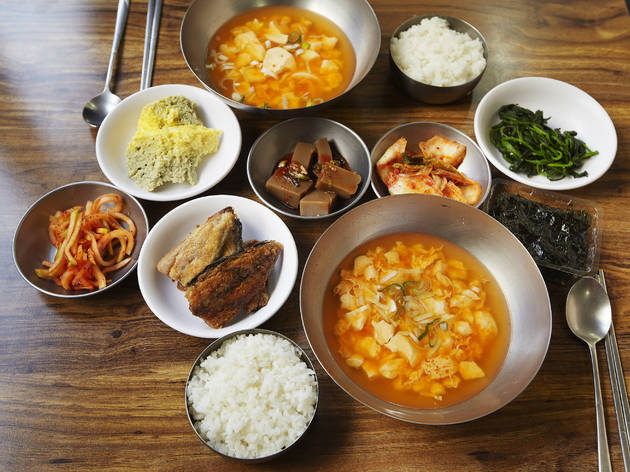 In the neighborhood and really want to eat like the locals do? Try Bukchon Sik-dang where the menu changes every day (except for Wednesdays when the main dish is always spicy stir-fried pork). While you may not be able to choose what you’re served, there’s always rice with a generous helping of soup and several side dishes. The restaurant may be intimidating if you don’t speak Korean and aren’t accustomed to Korean cuisine, but it’s worth stopping by if you’re looking for good food on a budget. 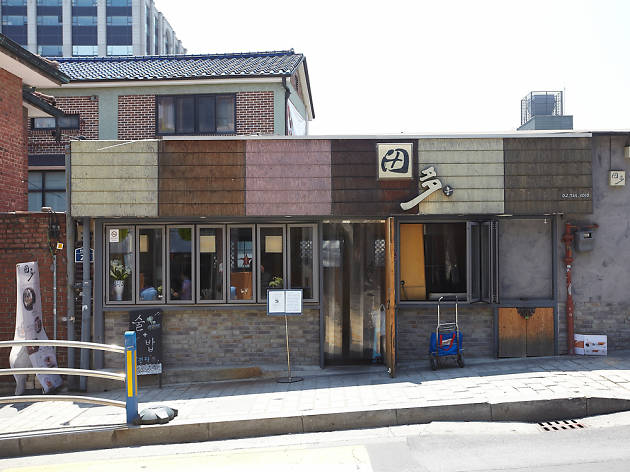 Jeonda serves up jeon (Korean pancakes), noodles and other dishes that go perfectly with makgeolli. A mother and her two daughters run this restaurant, which is known for its assortment of different types of jeon and spicy steamed galbi. But ask any local, and they’ll recommend Today’s Dosirak (packed lunch). Only 100 servings of Today’s Dosirak are prepared each weekday, with a rotating main dish (Monday is stir-fried pork, Tuesday is Andong-style steamed chicken and so on), three banchan dishes and soup. It’s a convenient option for those who don’t want to think about what they will eat for lunch and the homemade kimchi and banchan will ensure that you leave feeling that much more love in your heart. 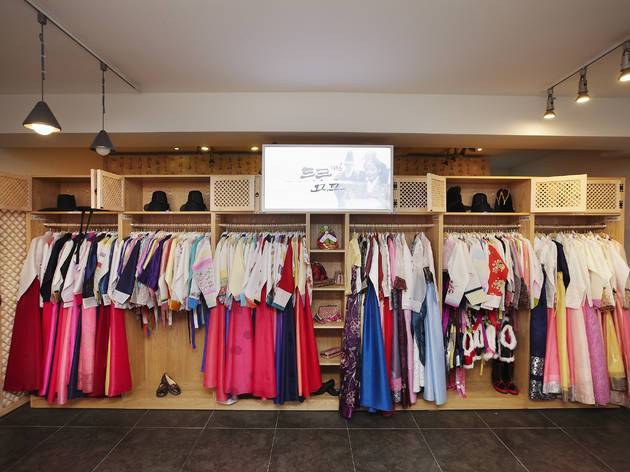 Want to maximize your Gye-dong experience and take some great photos? There are several places to rent a hanbok, but 3355 is one of the few with a wide range of everything from more casual shorter-length hanboks to royal outfits and hair accessories all neatly organized. 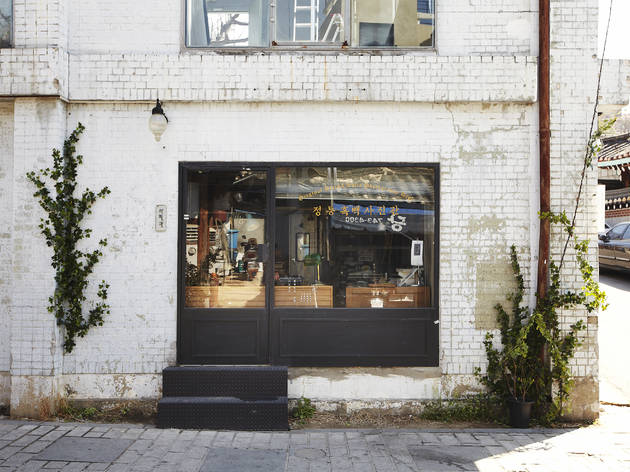 Located in the corner of a sleek, black building, Mulnamoo (literally meaning “water tree”) is made up of a studio on one side and a store on the other. The store sells traditional Korean handicrafts and the studio specializes in black and white photography. One of the most popular options is to take an 8x4 photo framed by a gray mat. The 200,000 won process involves two months of picking out prints in order to receive the framed final product at the end. However, those seeking something faster and more wallet-friendly may choose to have a black and white Polaroid taken for 30,000 won with specially imported Fuji film. 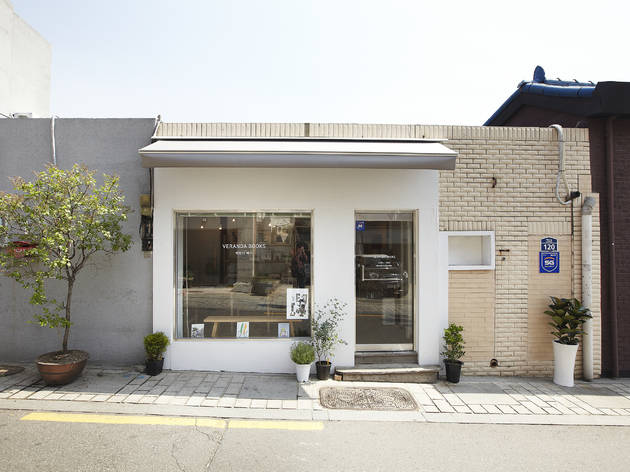 Opened just this March by illustrator Noh Jun-gu and former fashion designer Jina Lee, Veranda Books is a small, modern bookstore specializing in illustrated books. Filled with salary men from nearby companies during lunchtime, Jun-gu says that he wanted “a space that would provide brief respite from the hectic feeling of everyday life.” Here, you can find beautifully designed art gallery pamphlets, children’s books, flip books, photography books, postcards and even a few of Noh Jun-gu’s works. 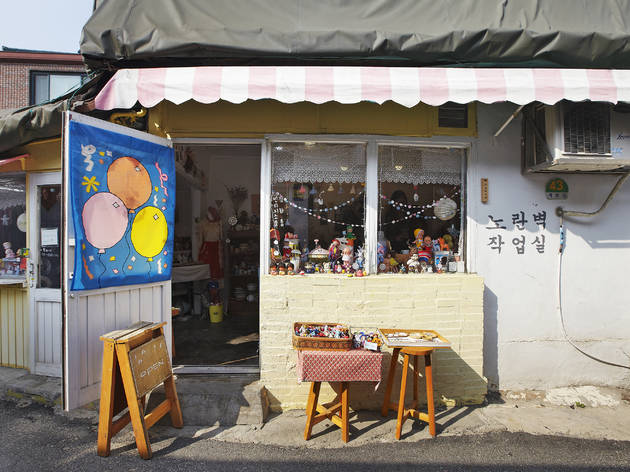 Peak inside this yellow toy store located in an alleyway off Gye-dong and you might recognize a variety of goods from your childhood. Looking as if an ‘80s-American garage sale exploded, the Yellow Brick Wall Workshop sells everything from Simpsons characters to paperclips with animal designs on them to jewelry and vintage Barbies. Since some of the products may show signs of wear and tear, the toys aren’t necessarily for children but may be a nice buy for a sentimental adult who’s still a kid at heart. 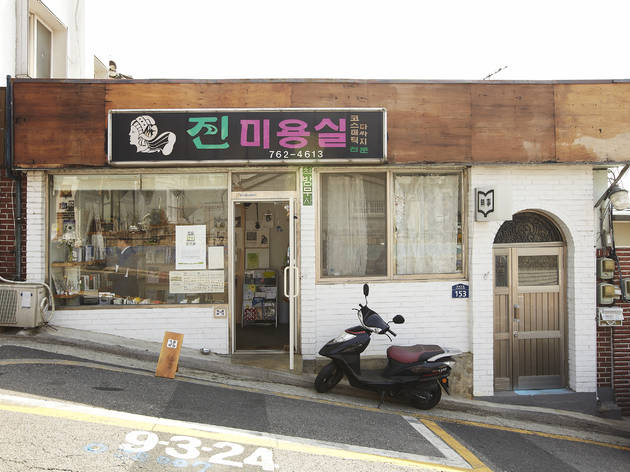 Although the words Chaeg Bang can be directly translated in Korean as bookstore, the word “musa” has several meanings. “We wanted it to mean ‘safely,’ but many people took it to mean ‘warrior’ instead,” explained owner Yozoh, who welcomes both meanings of the word for his store that sells independently published books, foreign magazines and postcards. In addition to the products they sell, Chaeg Bang Musa is also loved for its hair salon storefront, which Yozoh decided to keep when the bookstore moved in. 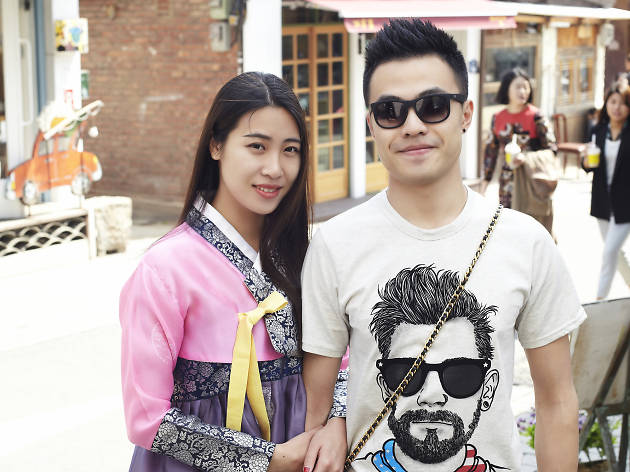 “I live in Hong Kong and Aquarius lives in Beijing. We’re meeting up [in Korea] because of the sakura that’s in season. Today, we’re in Gye-dong because Aquarius wanted to come see the original Korean village and we thought it would be nice to take some photos in the traditional clothing called hanbok. I think she looks beautiful and the neighborhood’s very good because it’s a hybrid of tradition, history and a lot of modern stuff, too.” 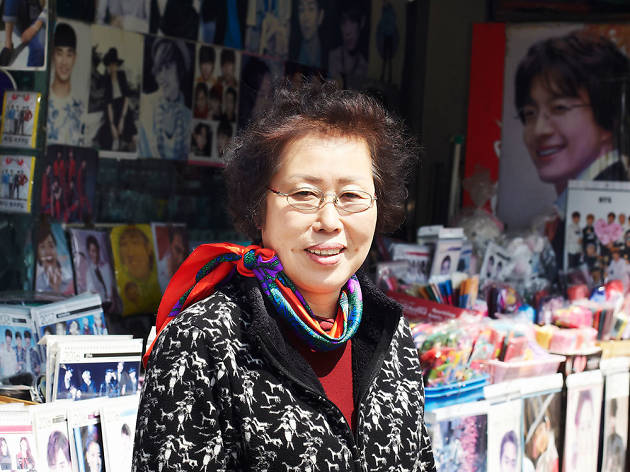 “I started a supermarket here 30 years ago, but around eight years ago, changed it to a Hallyu store. Choongang High School was a filming location for Winter Sonata so lots of Japanese people came as well as Chinese, Indian and Malaysian. These days, lots of Malaysians come looking for Hallyu stars. I’m not very good at English, but the people who come here can speak Korean pretty well. There’s not any one actor who’s popular right now, but Lee Min-ho and Kim Soo-hyun are steady sellers.”