There's certainly something festive about ice skating, and it's especially true at some of the Seoul ice rinks this year. Add some healthy fun to your Christmas at these places, and enjoy a glass of mulled wine or a warm cup of milk tea afterwards. 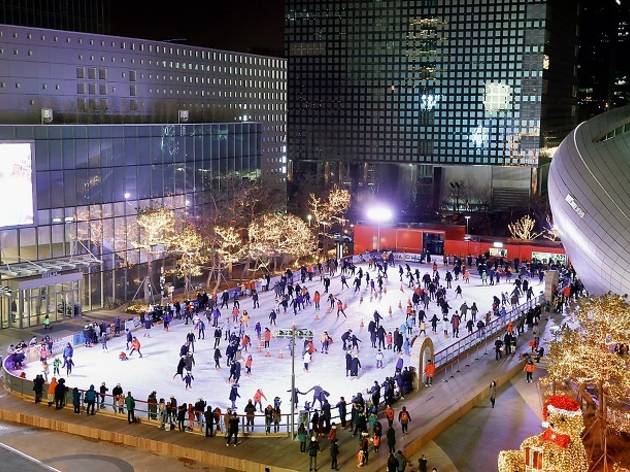 The plaza in front of MBC will be transformed into a skate rink. It’s not usually listed on tourist sites, so you’ll be finding a more local demographic. The MBC skate rink surpassed expectations with over 10,000 visitors in the first 10 days of opening in 2014, and has since been a popular location for skaters. Here you will be able to skate alongside concerts from celebrities and if you’re lucky maybe even see one up close! Skate and helmet rentals cost only 3,000 won. For those of you upset at the representative Seoul Plaza Skate Rink not in service this year, Sangam MBC Skate Rink will sure be a great replacement. 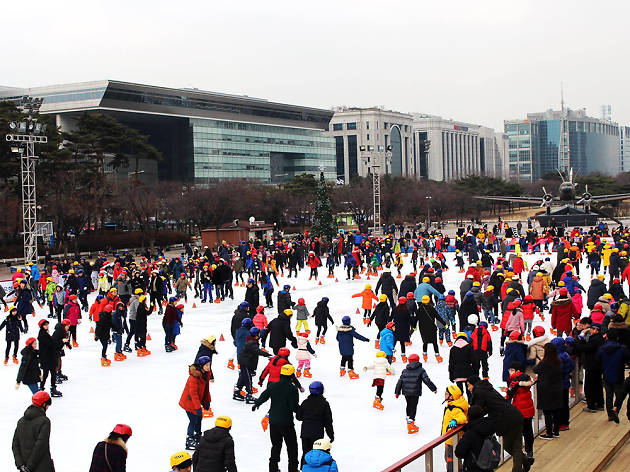 This one involves I•SEOUL•U, so you now it's going to be a good one. The official logo of Seoul that stands proud in the banks of the Han River has been transformed into I•SKATE•U to accommodate Yeouido’s pretty new skating rink from December 9th until February 14th, 2017. Yeouido Park is a more recent addition to the Seoulites' list of ice skating destinations, and it certainly doesn’t disappoint. In its second year running, couples and families will be able to skate, use the sledding slope, or just have fun making snowmen in the "snow playground." At only 2,000 won, you will get a pass for the rink, rent a pair of skates and a helmet for an hour and a half. Day passes cost 3,000 won while season passes are available at 20,000 won (valid for 55 days). This 1,800 square meter ice rink will be open from 10am until 9.30pm for the 68 days of operation. 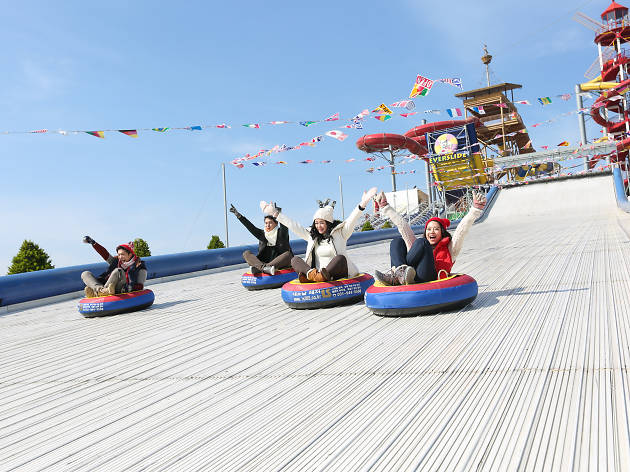 One Mount’s Snow Park located in... is a huge indoor winter theme park. Considering its proximity to Seoul, it's a great place to spend a whole day. After all, they only sell one day passes priced at 30,000 won for weekdays and 35,000 won for weekends (discounts are available). Once you’re inside, you’ll see the huge central skating rink (separated for skaters and sledders), a merry-go-round, bungee-jumping, snow-slope sledding, a 300 meter ice-road, and even huskies pulling on a sled! For those who need a little more thrill, there's the outdoor ‘Rainbow’ slope for sledding on the upstairs. Most of these activities and utilities are included in the entrance fee (helmets, sleds, carousel rides, etc.), with the exception of skate rentals (5,000 won) and an experience of being pulled by sled dogs (7,000 won). You can even try curling here. 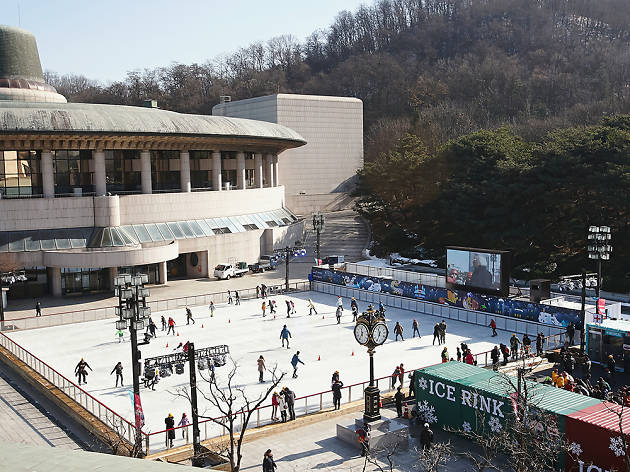 Seoul Art Center will be hosting the ICE DREAM, a pretty spacious ice rink near the entrance of the Seoul Calligraphy Art Museum in southern Seoul (Seocho-dong). The entrance fee of this rink is 8,000 won for adults and 6,000 won for elementary, middle and high school students, and it covers a skate rental and use of the rink for 1 session (60 minutes). Since the rink is scheduled to open on the same day as The Great Graffiti show (December 9th), it will showcase a unique graffiti theme that will add a contemporary and urban dynamic to the experience. There will also be small concerts and other events to celebrate the New Years, along with food trucks serving tteokbokki, fish cakes, pizza, drinks and more. 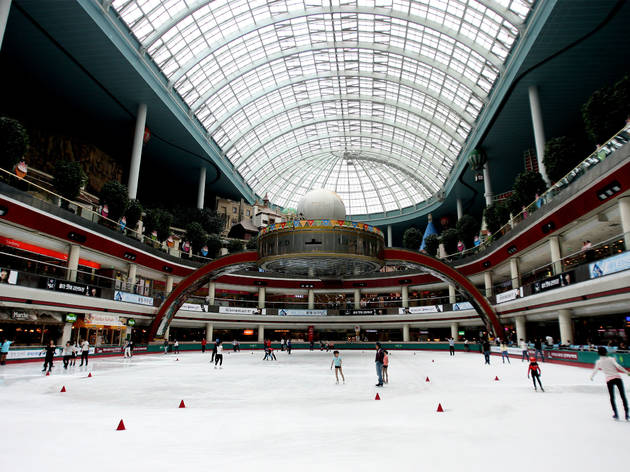 Located on the third basement floor of Lotte World Amusement Park, the glass ceiling allows for sunlight to pour through while skaters can enjoy the ice indoors. At night, the lights are dimmed and there are colored lasers that dance on the ice with you while you skate. Since the rink is surrounded by a variety of restaurants and snack stands, this makes for a convenient place to skate for long durations. 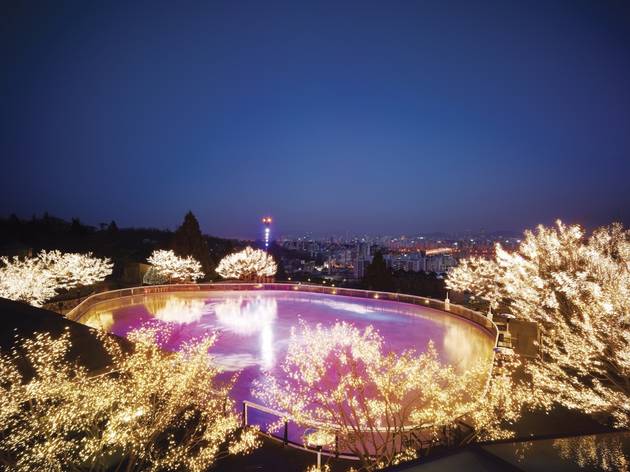 Known as one of Seoul’s most beautiful skating rinks, the Grand Hyatt Seoul on Namsan transforms their summer outdoor swimming pool area into this romantic wonderland during the winter. Adorned with twinkling lights and decorated trees, the ambiance (especially ravishing at night) makes it a popular attraction for many couples and several proposals have been known to take place on the ice. Those adverse to the cold may find that the best part of skating here is the outdoor heating system that’ll keep you warm even at 20 degrees below zero. Hot beverages and other drinks are available at the outdoor café, so you can always rest your feet and take in the view. 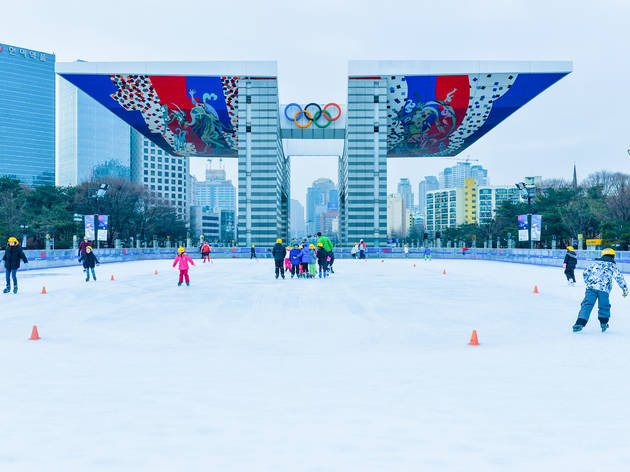 Songpa-gu residents and visitors who take solace in Olympic Park’s green grass during the summer can now visit the ice skating rink that’s open for the winter. Visited by more than 10,000 people last winter alone, the rink, which was built in 2006, grows in popularity each year. Those who visit during the month of December can also check out the Christmas tree and other decorations that are set up in the park. 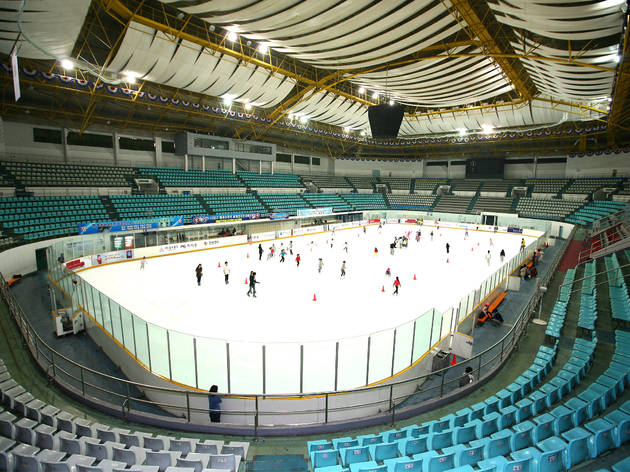 Originally opened with the intention of using the space as a baseball stadium in 1987, part of the facilities house an artificial ice skating rink that is open to the public year round (unless there’s an event or a competition). With 5,000 seats for spectators and the capacity to fit 1,000 skaters on the ice, events that take place here include figure skating, short-track speedskating, ice hockey and other shows. Kim Yuna’s won a few championships so let the space inspire you to do a few twirls and spins. There’s also a baseball stadium, shooting range and a plaza within the facilities if you’re looking for an all-sports weekend.