Guys wore long hair and bell-bottoms, and played Beatles’ tunes on their guitars. Though decades have passed since that time, remnants of the ‘70s and ‘80s can still be found all around us 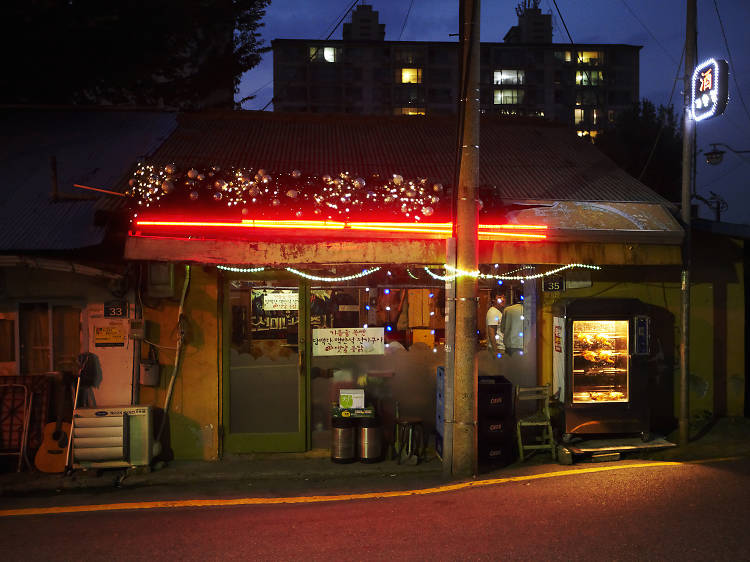 A small casual bar sits beside Yongsan Station. The establishment has always been called “The Railroad,” as it didn’t even have a signboard until recently. Quite a walk from Yongsan Station, the wide age range of customers all the way from their 20s to 60s will definitely surprise you. The old turntable in one corner plays a variety of genres. You might recognize the songs of Kim Kwang-seok, Kim Hyun-sik, Sinchon Blues and Nami while enjoying their mouthwatering food and drinks. You can also watch the trains right from where you’re seated.
Read more 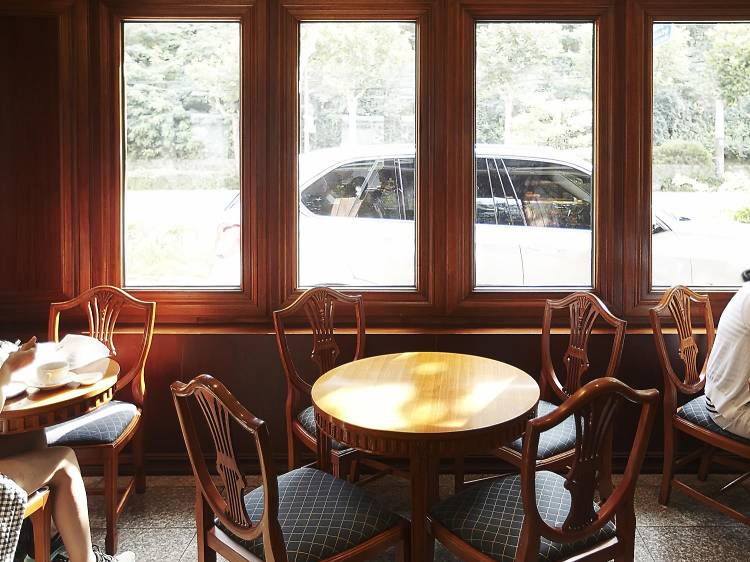 “Meet me at the bakery” was the phrase for any kind of occasion. Whether you were hanging out with a friend or going on a blind date, the bakery was the place to be. Richemont, one of the three major bakeries in Seoul, first opened in 1979 and their breads and pastries taste as great as ever. With the original interior still intact, the quality of more than 400 kinds of their breads has never declined, including one of their best sellers—cream puffs.
Read more
Advertising 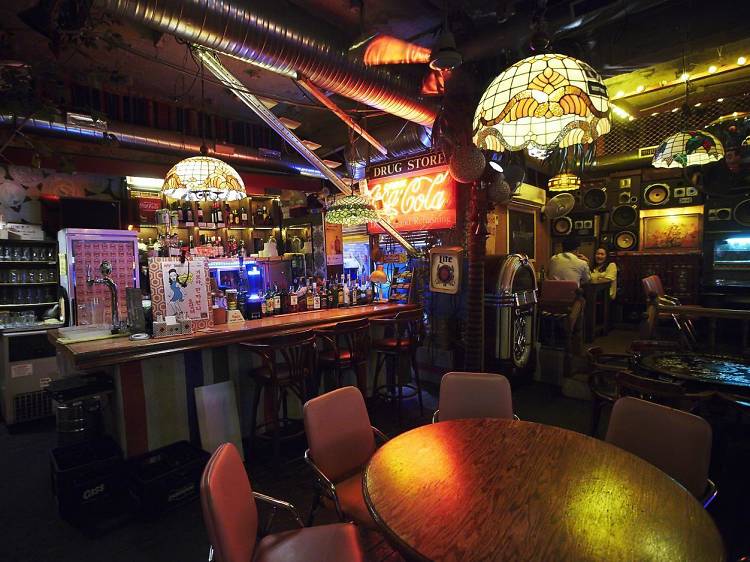 Hipsters of the past used to wear their hair long like the members of C’est Si Bon and played folk songs on acoustic guitars. The owner Jeong Wong-yong opened the doors to this bar in 1999. It was moved several times all over Sinchon and Hongdae before settling in its current location. The songs on the LP player span from the ‘70s all the way to the ‘90s, hitting customers with rich memories of times gone by. In addition, the vintage lighting, wooden tables and shelves, countless LPs that fill the walls and menu items like fruit salad definitely transport you back to the past.
Read more 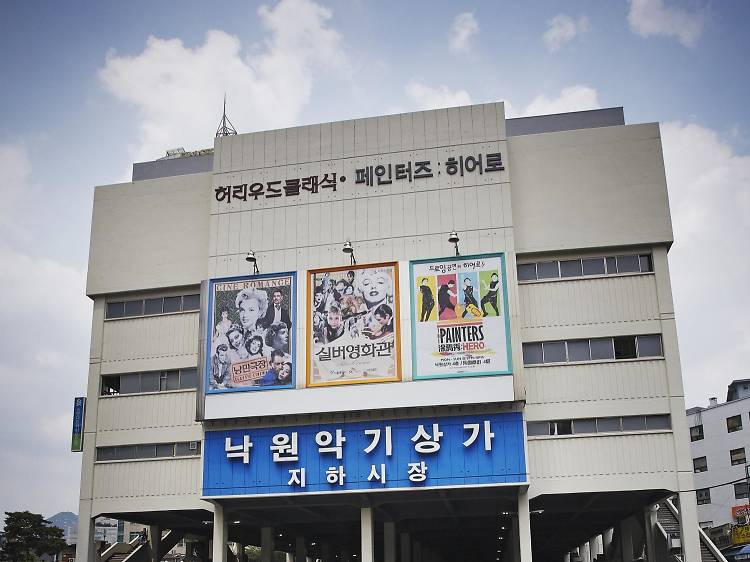 Since its first screening in 1969, Hollywood Theater (actually pronounced more like “hurriwood”) has bore witness to the history of Jongno, and is the birthplace of Korean cinema. Back in the ‘70s and ‘80s, theaters used to do double features. When a movie came out, first class theaters like the Hollywood Theater would screen it, followed by second tier and then third tier theaters. There would also be a second movie (usually an erotic film) screened right after as a sort of package deal. Although back then theaters like this were incredibly popular, even Hollywood Theater couldn’t escape the emergence of multiplex digital movie theaters and briefly closed down. In 2009, it reopened with three screens as a silver theater.
Read more
Advertising 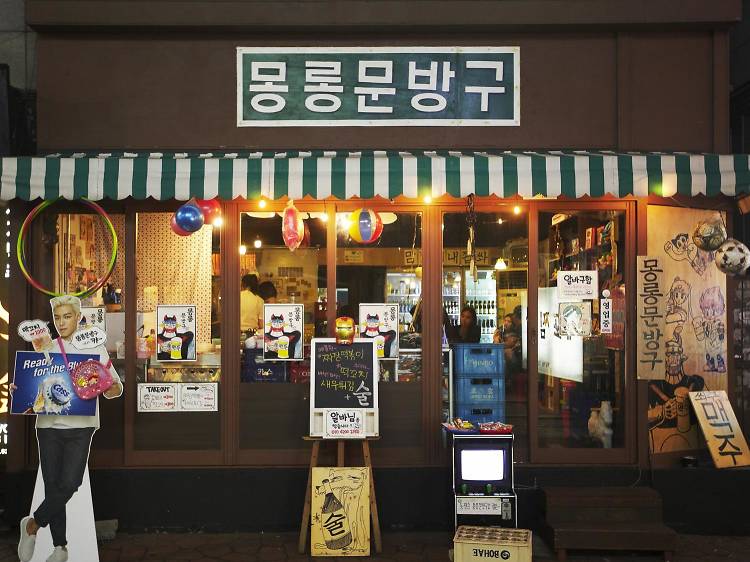 Those tiny stationery stores in front of all elementary schools meant the world to us as kids. Two young designers created Monglong Stationery, which is the embodiment of the stationeries of yesteryear in their purest form. Old school staples like Apollo, marbles and train-shaped pencil sharpeners fill the shelves inside. Chew on a spicy tteok (rice cake) skewer while sitting on the hard wooden chair just like the old days, and you’ll feel like you’re in a Korean elementary school from back in the day. Well, the only difference is that you’re served soju.
Read more 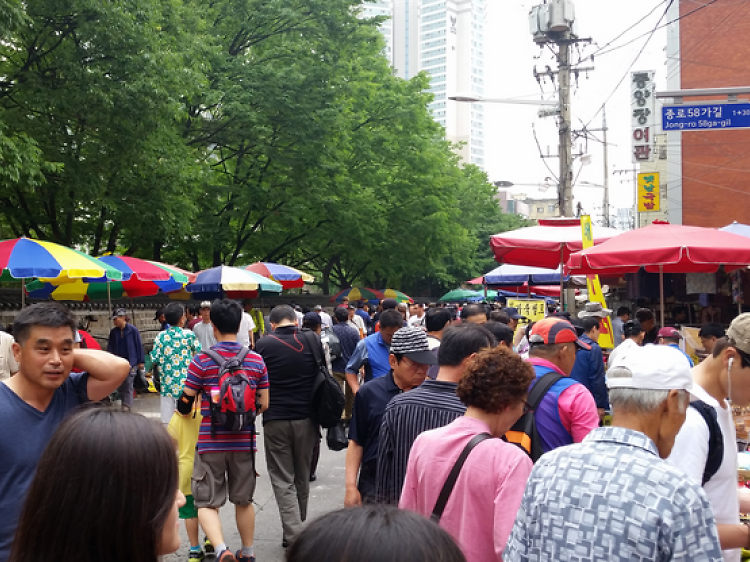 The Dongmyo Flea Market traces its history all the way back to the Joseon Dynasty. You can easily find ‘70s and ‘80s items here, including those grandpa cigarette pipes that you put the leaves in yourself. Goldstar (the old name for LG Electronics) televisions and cassette players are not only sold here but they actually work! Grandmas haggling with the younger ones for the junk straight from their home make for some humorous street scenes that can only be found here. I mean, as they say, one person’s trash is another’s treasure.
Read more 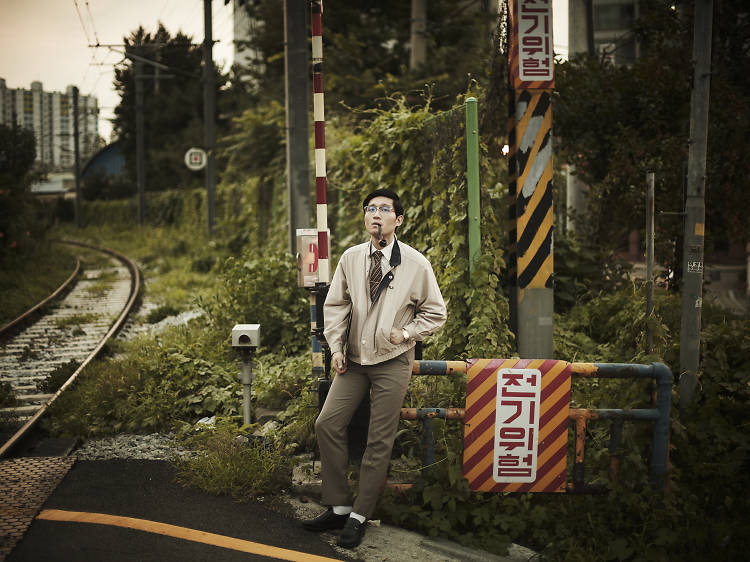 “Not long ago, I was kicked out of a hotel mid-set while I was deejaying. The thing is, it happens so often that it doesn’t surprise me anymore. I use pomade in my hair and wear vintage jackets with pride, but I also know that disco and funk music isn’t really a thing anymore. Ever since I entered my 20s, I always wore vintage, thickrimmed glasses and retro-pattered ties—disco has always been a big part of my life. Sporting this dated style definitely attracts attention, but it doesn’t really bother me. But sometimes, my parents still get surprised when they see me, haha. I think it was around 2009 when I was looking for music to use so as to start my career as a DJ. And Tatsuro Yamashita’s music just inspired me as his stuff totally reminded me of the tunes my dad would play when I was a kid. I was hesitant at first, because there weren’t that many DJs who played disco, but I met Dr. Hwang hyung (meaning “bro” in Korean), who’s a part of the disco/funk-based music crew YMEA. He really gave me a lot of advice and courage. My love for the culture and styles of the ‘70s and ‘80s has only grown since I started deejaying. Most of all, the good vibes I get from all of it just really draws me to things from that era. Music used to be distributed on LPs and CDs back then, so there are a lot of great works that didn’t quite catch people’s attention in Korea. My mission is to bring this type of music to people’s attention today so that the music can live on. Whenever I play the song “Hand in Hand” I think: “Hey, it’s something old you’ve probably never listened to, but it’s good. Right? Then let’s disco!’” 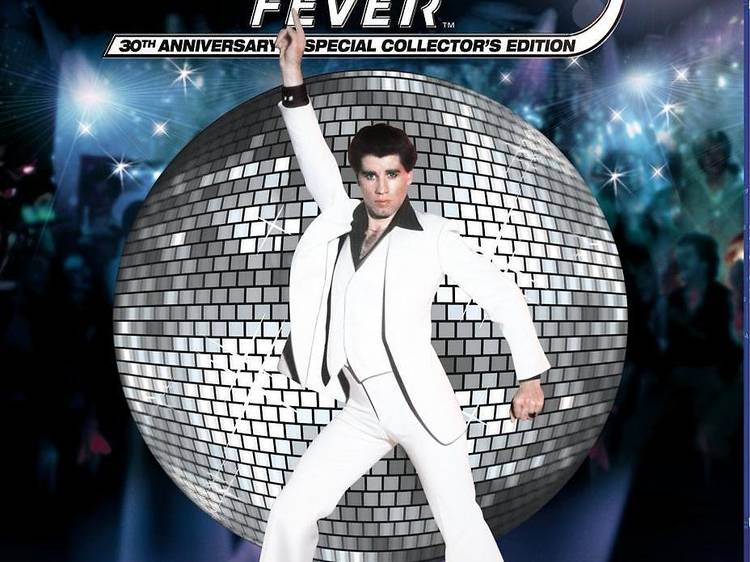 You didn’t experience the ‘70s if you weren’t at a disco club with pomade in your hair and bell-bottoms on, just like John Travolta in Saturday Night Fever. Long hair, miniskirts, square glasses and Jordache jeans are all icons of the era. 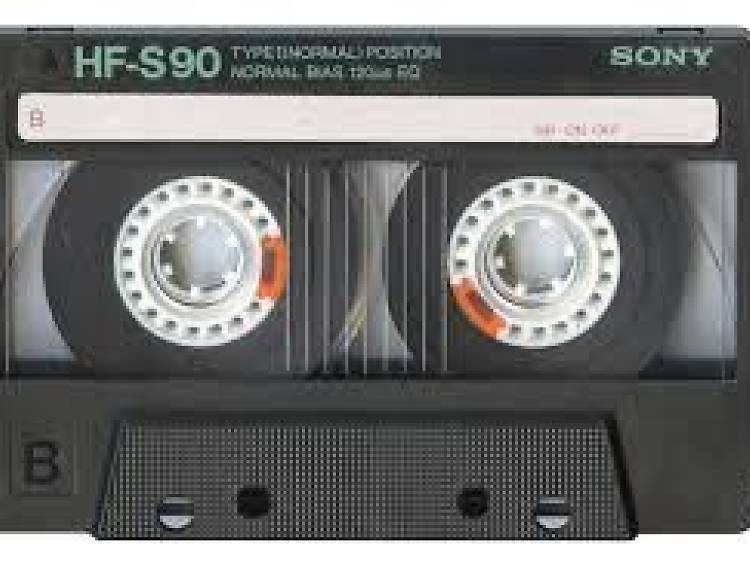 Only the cool kids would walk around with a Walkman playing in their hands. Ah, there was nothing more romantic than staying up all night making a mix tape for your crush. 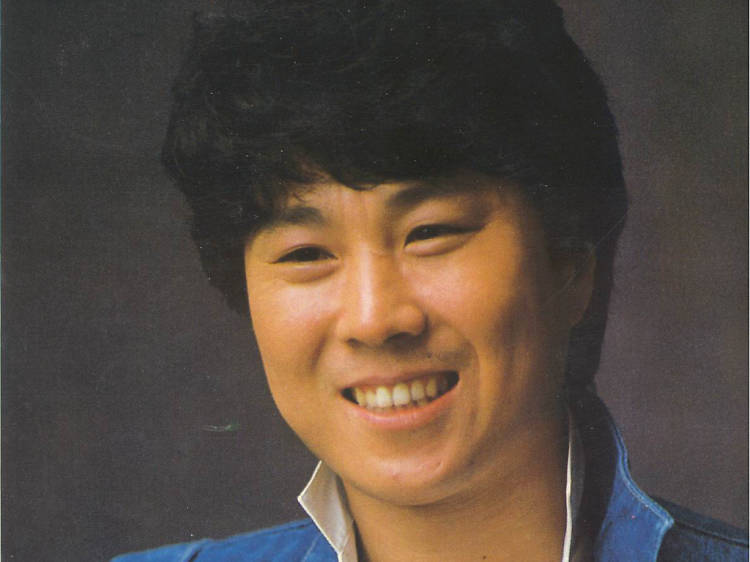 The ‘70s and ‘80s were the prime time for music. Musicians were constantly releasing new tracks. Sanulrim, Kim Hyun-sik, Nami, Cho Yong-pil, Nam Jin and Na Hoon-a are some of the most popular singers who paved the way for Korean music. 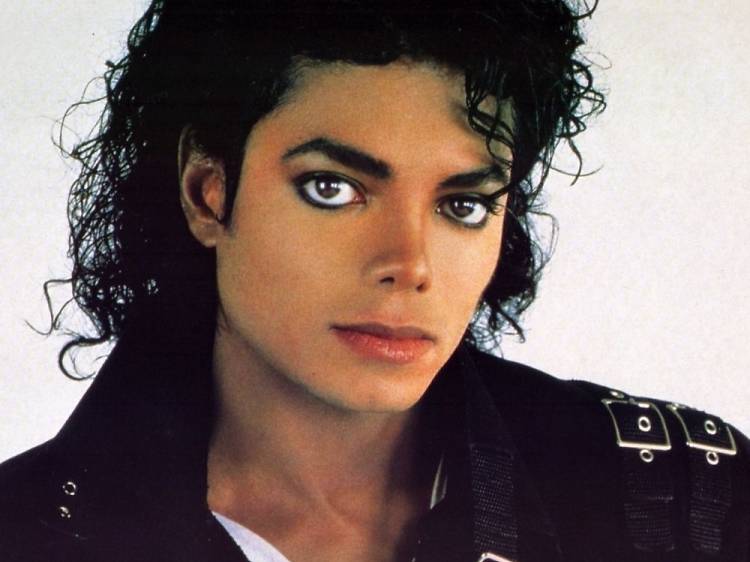 MJ, the King of Pop; Madonna, the Queen of Pop; Donna Summer the Queen of Disco; and Living legend of disco funk, Earth, Wind & Fire all dominated the charts in the ‘70s and ‘80s.