Sightseeing: the O and V trains

See beyond the mountains on Mt. Taebaek

“There are other memories, not only flowers from the fire but little sprouts that suddenly appear when I go on trains,” wrote poet, and avid train lover, Pablo Neruda. In Temuco, Chile, the National Railway Museum was built in his honor and is laced with his poetry, as his train travels were often the windows for his words. I had imagined the five-hour O-Trainto be quiet and pensive like my muse for this trip—the Bergen Railway. Instead, it turned out to be filled with a bipolar pop music playlist and cheery train attendants who also doubled as the hosts of a game show aired throughout the train. Rain and fallen branches on the tracks meant a two-hour delay in Buncheon, where we were scheduled to transfer from the O-Train to the V-Train. To kill time, we bought fresh dongdongju and apples from the 55-year old convenience store named Hwang-su Super, until cheering from hiking-gear dressed ajummas and ajusshis signaled the V-Train’s departure. The V-Train, only an hour long, served as the highlight of the trip, where we rode with the windows down as it wove in and out of tunnels built into the soft mountain hills, wet with raindrops and trickling valley rivers. Though supposedly most beautiful in winter, the occasional white flowering perennials speckled like snow showcased the mountain’s appeal even off-season. Once in Cheoram, we walked around the Coal Mine History Town—a preserved collection of buildings from the ‘40s to the ‘60s made even more realistic by the gray weather. Inside a few of the buildings, life-size replicas from the not-so-distant past, remain with written explanations about Cheoram’s history. The plaques on the walls were not half as interesting as Kim Geun-bae, our bus driver and Taebaek-teacher abroad Bus 4 to Taebaek Market, who welcomed every passenger with a personalized hello and provided a detailed account of every building we passed. “It’s such a pity to me all the sights that are missed out on, just because people don’t know.” A hearty Taebaek special of hanwoo beef cooked over yeontan coals at Hyundai Silbi carried us over until our arrival atRockitsuda, a contemporary-style pension in nearby Jeongseon county. Over hot cups of tea, owner Kim Jae-il exclaimed, “Oh, the beauty of Taebaek—I felt it during winter train rides here.” 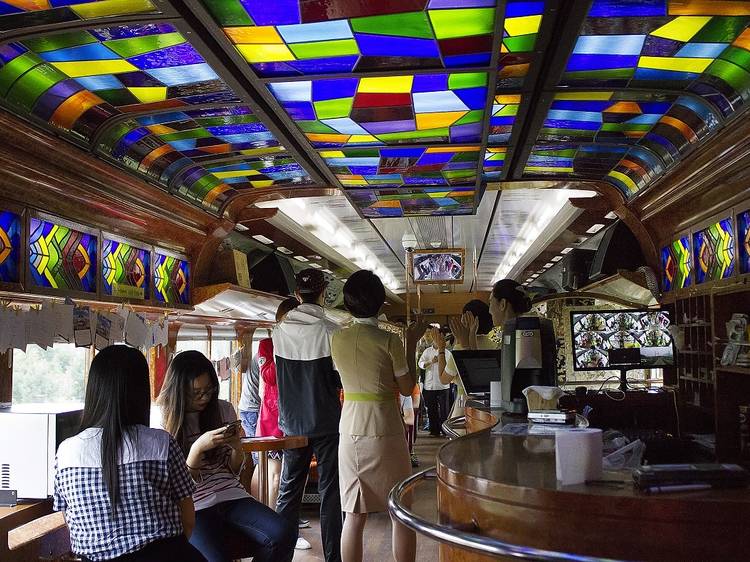 8:15am – Take the O-Train from Seoul Station

5:00pm – Take the bus to Taebaek Market, walk around and eat at Hyundai Silbi

8:00pm – Take a taxi to the multipurpose Rockitsuda Café and have a cup of tea 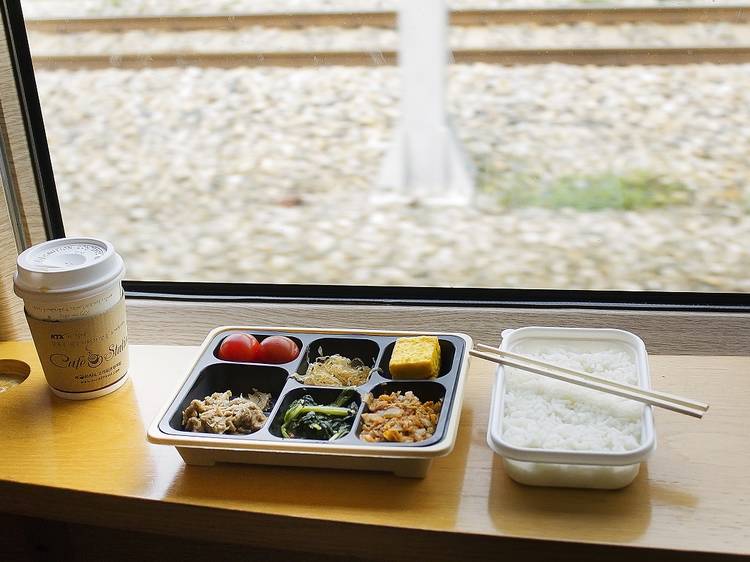 1. Normally, two types of dosiraks are served on the train. Consisting of rice, kimchi and one main dish, the small boxes cost around 8,000 won and sell out early on in the day. Grab some food from the convenience store before you get there to avoid getting hungry.

2. Although it’s become illegal in Seoul to charge beyond the meter price, going from one region to another can add on an extra 20,000 won to your taxi costs, so make sure to ask before you get in.

3. While these sightseeing trains are sometimes referred to as “tourist trains,” they are actually quite difficult to buy on the Korail website as a foreigner. For more detailed information, try calling the Tourist Information Hotline at +1330 or go directly to the station. Bring your passport for discounts.

4. When traveling in colder weather, be aware that there may be delays and, or cancellations. When we were delayed, the conductor announced that there were buses available to Cheoram in case travelers were in a hurry and that refunds were available. They also passed out packets of cream-filled bread and milk boxes. 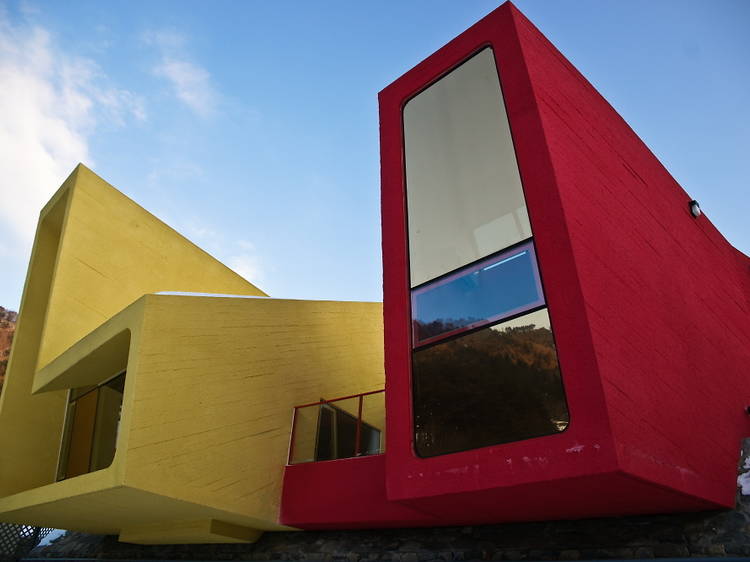 “I just wanted a space to play,” owner Kim Jae-il explains in the multipurpose Rockitsuda Café. The pension is composed of six rooms—Ferrari Red, Stealth Black, Spanish Blue, Flamenco White, Barbie Pink and Oriental Gold. Built by the renowned architect Moon Hoon, who is sometimes referred to as a madman, each structure is a character of its own not only in color, but in its perception. Ferrari Red, for example, gives a low-range, wide-open view of the mountains while Spain Blue emphasizes the surrounding skies. While certain aspects of the pension (cracks in the windows and a fickle boiler, for example) are currently under renovation, the pension is a must-see—especially in comparison to the ordinary house structures in the surrounding area.
Read review
Show more 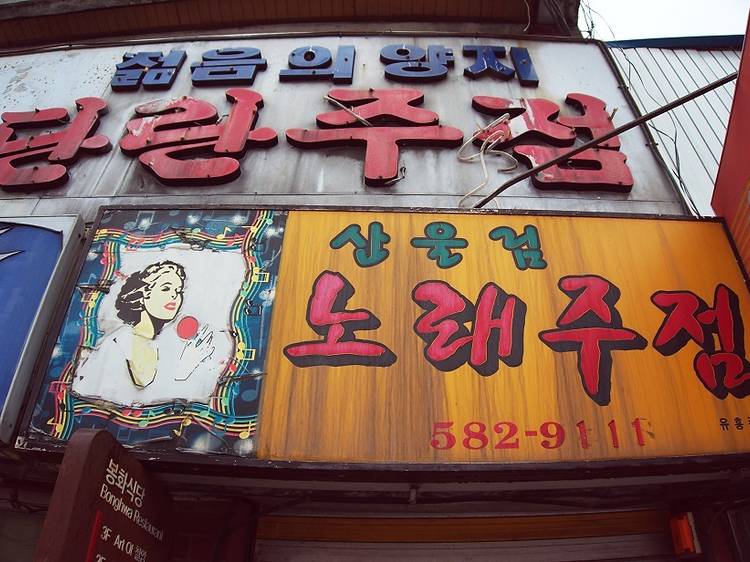 The town of Cheoram used to be famous for mining coal. For historical preservation, the government has bought out this stretch of land in 1997 and today it boasts a reputation as "the largest living coal mine museum in Asia" (if you don't count unofficial museums and still living villages that is). Walk in and out of the small buildings here and peek into the town as it once existed. Worth seeing if you're in the area... or if you're a coal fanatic. 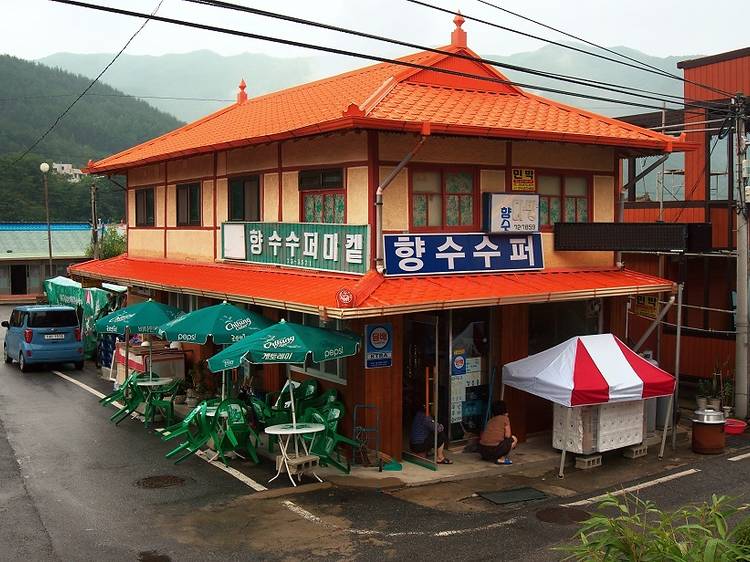 This 55 year old "super" or convenience store sells all your train-stop needs; chips, beer, snacks and dongdongju, of course. When the V and O trains started to run their course here, Korail asked them not to change their exterior and to be part of their tourism experience.
Advertising 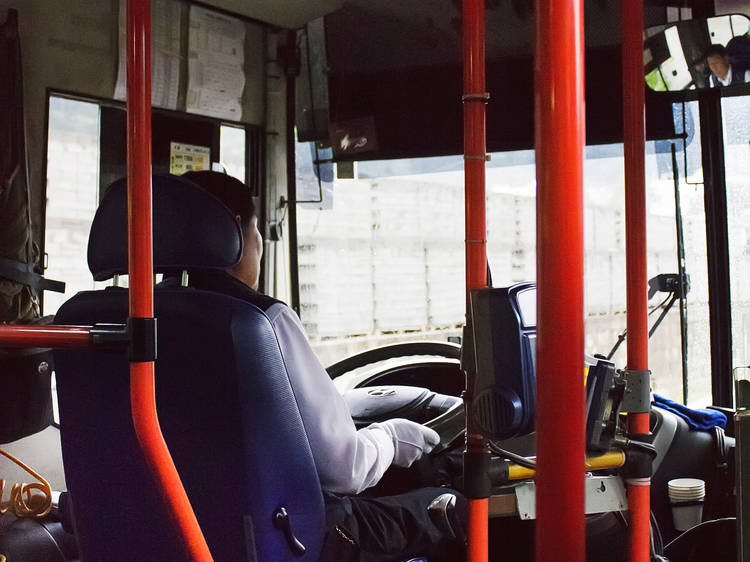 This bus driver guessed that we weren't from around here when we got confused on the way. He asked me to sit in the front and explained which place was where. "It's too bad I have to spend my day off going to Wonju tomorrow, I would have loved to show you around," he said. "Come back in the winter and look for me on the bus." 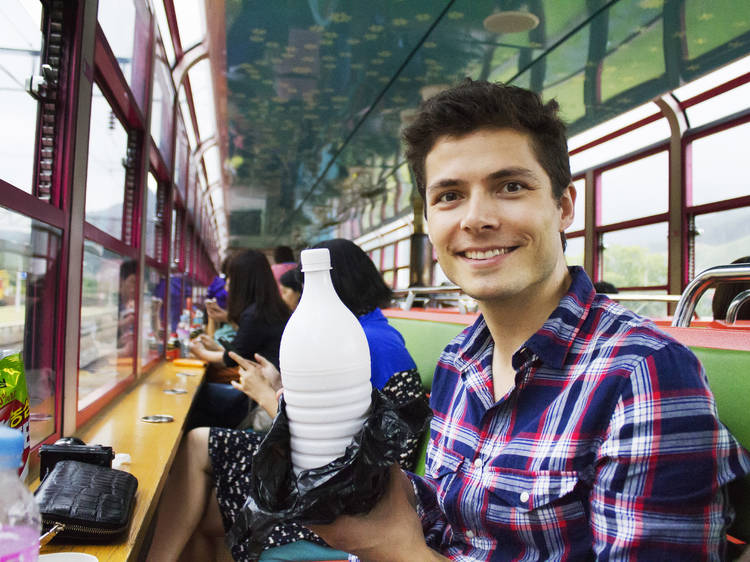 Our special guest, Will Arndt (pseudo makgeolli expert) with dongdongju from Hwang-su Super. You can tell from his smile - he really likes it!
Show more 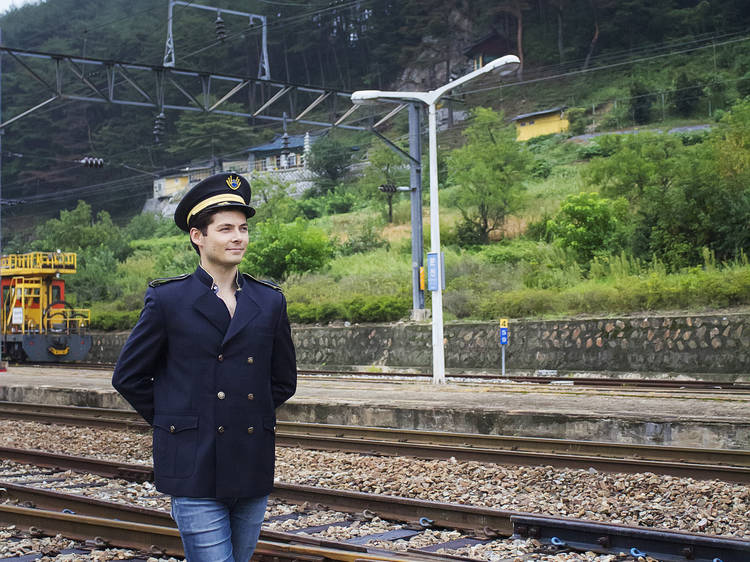 The V-Train was the undisputed highlight of my weekend riding the rails. When our departure was delayed, we strolled past the gaudy plastic Santa Village surrounding Buncheon Station on our way to the unassuming village nearby. The sweet, mild brew of the label-less bottle of dongdongju and cheap and crisp apples from a local vendor, were the perfect way to pass the time as a light drizzle fell onto the train car. I discovered another treasure in the station’s waiting room, where a small library and an old-fashioned conductor’s uniform await travelers. Finally, the train journey was underway, and while foreign tourists may not benefit from the detailed stories shared over the speakers (for example, Yangwon Station is the nation’s smallest), nothing is lost visually. Misty crags give way to river valleys, and dark tunnels build a sense of anticipation for the next scene. Brief whistle-stops give a chance to breathe in some country air or grab a cup of makgeolli and a plate of spicy pork skins from a trackside farmer’s stand. It isn’t just dramatic scenery greeted with a chorus of oohs and ahhs, but a total experience of a slower and perhaps antiquated way of life in the Korean countryside.