Mike Leigh interview: ‘I always try and deliver a different kind of experience’

Ahead of the screening of ‘Mr Turner’ at Zurich Film Festival, Mike Leigh talks about making his most ambitious film to date and why he likes to keep us on our toes

Mike Leigh’s first-floor office on Greek Street in London's Soho district feels more like a shabby living-room, with its fireplace, film posters, sofa and armchairs. It’s here, in a small set of rooms off a grubby hallway (past a sign pointing to the ‘French models’ upstairs) that Leigh plots films, meets actors and cooks up plans with collaborators. Famously, Leigh spends weeks, even months working with actors, building up their characters and improvising, until finally he has a script to shoot. It’s here, in this room, that those conversations start, resulting in films like ‘Naked’, ‘Secrets & Lies’ and ‘Topsy-Turvy’. On the doorbell there’s a small label, ‘Untitled 2013’, the working title for what would become his latest film, ‘Mr Turner’.

When I arrive, Leigh and a colleague are rearranging pictures on the wall – black-and-white stills that go right back to his first feature, 1971’s ‘Bleak Moments’, which he directed aged 28, 11 years after moving from Salford to study acting at Rada. Next week, a TV crew is coming to shoot one of Alan Yentob’s ‘Imagine’ arts documentaries for the BBC. The spring clean is funny if you’ve ever met Leigh – who is the least slick, most take-me-as-you-find-me-or-lump-it man working in the film industry.

For journalists, the experience of talking to him fits somewhere between a job interview and a trip to the dentist. He knows how to control a situation, which is unsurprising considering his method of filmmaking: juggle separate strands of improvisations for weeks on end until finally pulling them all together. If he doesn’t like a question, he often translates it into a better one. If you let slip a throwaway remark, prepare to be slyly mocked. He has an acute bullshit detector. ‘How are you?’ I mutter several times while sitting down opposite him and gathering my thoughts and notes. ‘Fine. You’ve asked me that three times.’ A smile breaks out from behind his bushy beard.

‘Mr Turner’ is Leigh’s latest feat of cinema puppet-mastery. It’s a portrait of the nineteenth-century painter JMW Turner, who also happens to be the subject of a major new show at Tate Britain. Timothy Spall, who has worked with Leigh six times before (on five films and one play) huffs, puffs and grunts his way through the film as the bohemian painter, who never left his humble Covent Garden origins behind in spite of his fame. Spall, who won the Best Actor prize at Cannes in May for the part, was Leigh’s first choice. ‘I never thought of anyone else,’ says Leigh. ‘He’s a consummate character actor and I knew he could do the kind of discombobulated, rough-edged but passionate guy that Turner was.’

Over the phone from the Toronto Film Festival, where ‘Mr Turner’ is screening, Spall tells me that he bumped into Leigh on Greek Street seven years ago. The director offered him the role of Turner there and then, but told him to keep it under his hat. ‘Then I heard nothing for four years.’ In 2011 Spall was walking through Soho and on the off chance phoned Leigh, who invited him straight round to Greek Street: the film was going to happen in 2013 and he wanted Spall to learn to paint over the next couple of years. So that’s what the actor did, before joining Leigh in 2013 for the long period of improvisations and rehearsals. ‘Mike applies a very particular science to how he works,’ Spall explains. ‘It hasn’t changed much over the years.’

Visually, ‘Mr Turner’ holds a mirror to the wonder of Turner’s paintings, exploring the mystery of the artist’s relationship with nature, while also delving, as you’d expect with Leigh, into the nitty-gritty of his personal relationships. The focus falls on the last 25 years of Turner’s life and includes a staggering, digitally-rendered shot of a steam tug pulling an old warship up the Thames – a scene that directly recreates Turner’s celebrated painting ‘The Fighting Temeraire’, currently hanging in the National Gallery.

‘When I started thinking about Turner’s work, it immediately presented itself as cinematic – he’s a cinematic painter,’ reasons Leigh. ‘Then, when I started looking at Turner the personality, he absolutely presented himself as a potential character for a Mike Leigh film.’ His Turner is a complex man – a genius, obviously, but also a schemer, vulnerable, callous (he’s totally indifferent to his children by an ex-lover), close to his elderly dad and a bit of an old letch with his devoted housekeeper.

Leigh had wanted to make ‘Mr Turner’ for years, but it took his producer well over a decade to pull in the money (it cost £8.25 million, more expensive than all his films except ‘Topsy-Turvy’). Even so, he had to compromise, unable to film on location in Venice as he’d hoped. ‘While shooting all the films I’ve made this century – “All or Nothing”, “Vera Drake”, “Happy-Go-Lucky”, “Another Year” – we’d be standing around waiting for the clouds to shift, saying, “We must make that Turner film.”’

Leigh bats away my attempts to find autobiographical echoes in ‘Mr Turner’. He just about humours the suggestion that there are parallels between Turner, an artist who was a key member of the Royal Academy and friends with aristocracy and yet managed to remain fiercely independent, and Leigh, the Rada-trained actor and former Royal Shakespeare Company assistant director who found a way to break out alone and get his idiosyncratic films made in a conservative film industry. Does he at least feel an affinity with Turner that goes beyond liking his work and finding him interesting?

‘Yes, I suppose so,’ he says suspiciously. ‘People have said this to me, but it never really occurred to me as such. I mean, Turner definitely reminds me of some people I’ve known because I’ve hung around with artists for a very long time…’ He tails off, unhappy with where this is going. ‘I think this is quite a limited topic,’ he says, finally. I give it one last go. In ‘Mr Turner’, he shows us an artist having to play the game with the establishment to get things done. Does he relate to that? Leigh gives me a sharp look. ‘If the question is: Was that at the forefront of my mind? Then, not really. Also, there are things about Turner, for example the whole thing about denying he’s a parent, which I don’t suffer from at all.’ Leigh has two sons from his marriage to the actress Alison Steadman; the youngest, Leo, is also a filmmaker – his warts-and-all making-of film to accompany ‘Mr Turner’ will be released next year.

Famously, Turner’s radicalism peaked in his later years, and everyone talks about ‘late Turner’. So what about ‘late Leigh’? What’s different about his later work? Leigh answers slowly. ‘It’s a complicated question. “Bleak Moments” was made when I was 28. I’m now 71. Let me ask you: do you think there’s a change or a shift in what I do?’ I tell Leigh that in my opinion he’s developed his style, honed it, that his characters feel more complex, more lived-in. But there’s been no revolution. ‘I think that too.’

Leigh pauses. ‘The answer to your question is that I’ve never thought: Now I’ve got to change style. But I always try and deliver a different kind of experience with every film. I try to do something stylistically different within a consistent genre. For example, thinking of comedies: “Happy-Go-Lucky” does something that “Life is Sweet” tries to do, but in a more organic way. I was doing that very deliberately dishing up “Naked”, when everyone was expecting more of “High Hopes” and “Life is Sweet”. Then to go from “Secrets & Lies” and “Career Girls” to “Topsy-Turvy” – part of the wheeze was that it was what everybody was least expecting.’

Next year, Leigh is planning to do something completely different – ‘a sidestep from my day job’ – directing a production of Gilbert and Sullivan’s ‘The Pirates of Penzance’ at the English National Opera. ‘It’s already designed and cast. All I’ve got to do is go in for six weeks and put it on, which is fairly terrifying.’

He has returned to theatre three times over the past decade: twice at the National Theatre for two new plays, ‘Two Thousand Years’ and ‘Grief’, and once at the Hampstead Theatre, for a revival of his 1979 play ‘Ecstasy’. But now he’s in his seventies, is he about to turn his back on cinema for a quiet life in the theatre? Not a chance. Already his producer is raising money for ‘Untitled 2016’. ‘Going off to do plays in the theatre is a natural thing to do sometimes,’ he says finally. ‘But I really am very happy just making films.’

Zurich Film Festival this year will award Leigh with its “A Tribute to...” Golden Eye award. 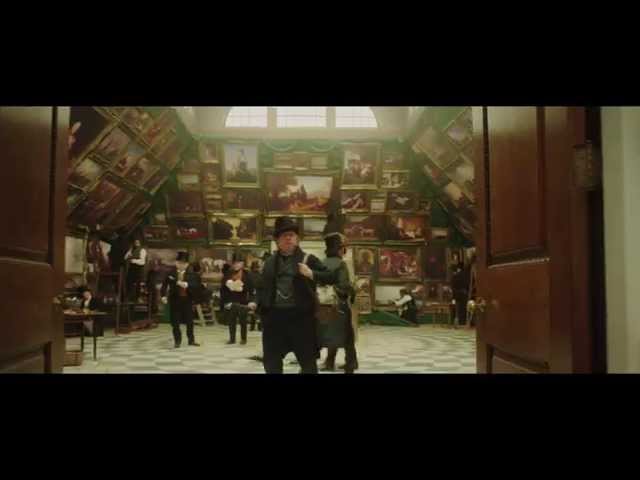 Twice before, first with 'Topsy-Turvy' and then with 'Vera Drake', Mike Leigh has punctuated his bittersweet studies of contemporary life with period dramas. Now, with 'Mr Turner', the British director of 'Naked' and 'Secrets and Lies' takes us back to the nineteenth century and the later years of the celebrated, groundbreaking, difficult painter JMW Turner (1775-1851).

Check out our guide on Zurich's hottest films Zurich Film Festival (ZFF), now in its 11th year, is a well-respected fixture of the internatonal film festival circuit. The 11-day festival attracts some big names and around 80,000 attendees to its premieres, screenings, galas and red carpet events. Featuring the work of emerging and established filmmakers, ZFF presents films in a range of languages, but predominantly English and German. Find below your full guide to the Zurich Film Festival 2015.
Read more
Show more
Recommended