You may have already worked your way through our list of Tokyo's top bath houses, in which case you'll know that sento are popular for their health and relaxation benefits. But did you know many of these public baths feature exquisite artwork too? From the 680 sento in Tokyo, we've selected six of the prettiest so that even if you can't make it to Mt Fuji, you can still bathe at the foot of the sacred peak. While you're at it, read up on onsen etiquette. Some sento are slightly more lenient when it comes to onsen rules like 'no tattoos', but you should still be aware of the basic regulations. And if you're looking for the real deal, read up on our top hot spring getaways and treat yourself to a little bit of onsen luxury. 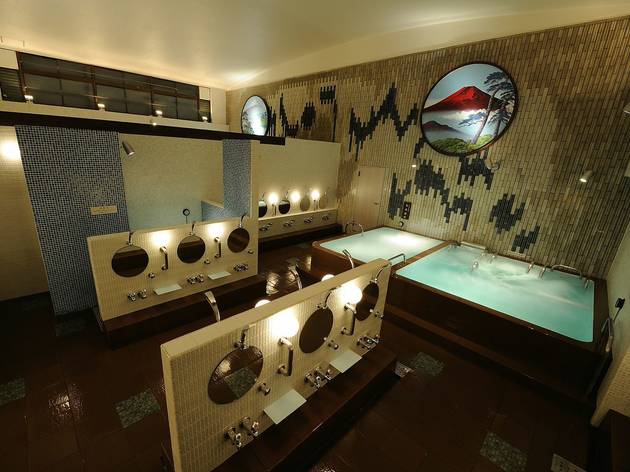 The art
Recently restored by architect Kentaro Imai, Bunkayokusen (文化浴泉) is what’s known as a designer sento. Concerned about the survival of the sento tradition, Kentaro has become a specialist in renovating public baths, hoping to revive interest – and his efforts are paying off as younger people flock to these more modern baths. Kentaro gives each sento he works on a second life, integrating chic details while preserving the traditional atmosphere – in Bunkayokusen’s case, features such as its remarkable wooden ceiling, mosaic wall and mural of Mt Fuji. The mural was painted by Morio Nakajima, one of only three remaining sento mural painters in Japan, who usually focus on images of Mt Fuji because people like to bathe at the ‘foot’ of the mountain. The murals are called ‘penki-e’, named after the kind of paint used, and usually feature the mountain painted in blue on one side and red on the other.
The facilities
The men’s and women’s baths are slightly different, so they swap sides each day. There are three types of baths – mssage, nanobubble and cold water – and a sauna. The nanobubbles are so small that they penetrate deeply into skin pores and clean them out. Calcium and magnesium are removed from the water to make it softer on the skin. The lobby features a massage chair for extra relaxation.
Read more 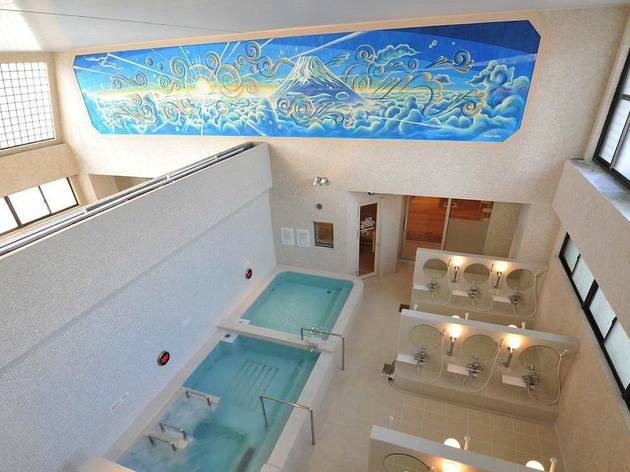 The art
Another designer sento overhauled by Kentaro Imai, Kohmeisen (光明泉) reopened in 2014 in the heart of Nakameguro’s trendy shopping area. Kentaro came up with a design that fits well with the surrounding cityscape – a soft white colour scheme and a mural of Mt Fuji created by graffiti artist Gravity Free.
The facilities
There are three baths – massage, carbonated and cold water – and a sauna. A rotenburo (outside bath) is available on only one side of the sento, so the men’s and women’s sides are swapped every Friday to allow everyone to experience rooftop bathing – a rare treat in central Tokyo. The radium-rich water is good for relieving pain and fatigue.
Read more
Advertising 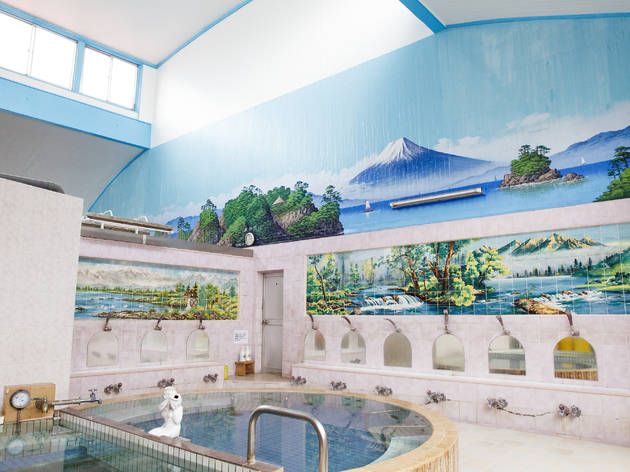 The art
A retro public bath from the mid-Showa period, Yama no yu Onsen (山の湯温泉) features a beautiful Mt Fuji painting by 79-year-old Kiyoto Maruyama, the oldest of Japan’s three remaining sento painters. Besides the main mural, there are also many smaller paintings on the bathroom tiles as well as in the steam room. Adding an extra arty touch are the original posters by illustrator and regular customer Miho Tanaka. Undoubtedly one of the most picturesque sento we’ve been to.
The facilities
The round bath in the middle of the room is an unusual feature. It’s divided into two parts – one a jet massage bath and the other an aroma bath that changes its scent every day. The steam sauna room with wormwood aroma is excellent for your skin and can be used at no extra charge.
Read more 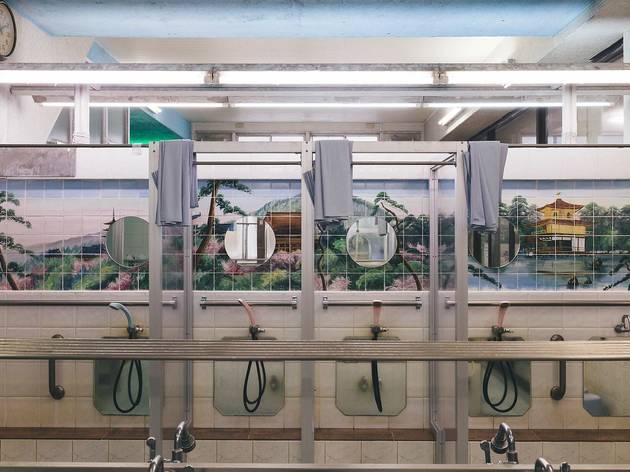 The art
Antique pictures and celebrity autographs line the walls from entrance to locker rooms and the whole place is filled with objects and souvenirs collected by the owner, making Daikoku-yu (大黒湯) feel almost like a museum. Inside the bathroom, a mosaic mural depicts a European landscape, which the owner tells us was ‘very trendy and new’ when it was first completed 40 years ago. The men’s shower wall features a painting of Kyoto’s famous Kinkakuji (Temple of the Golden Pavilion), while the women’s side is decorated with images of Nikko.
The facilities
A comfortable massage bath, cold water bath, electric bath and sauna. The men’s sauna features a spacious rest room with relaxation chairs. There are also a few fitness machines in the locker room.
Read more
Advertising 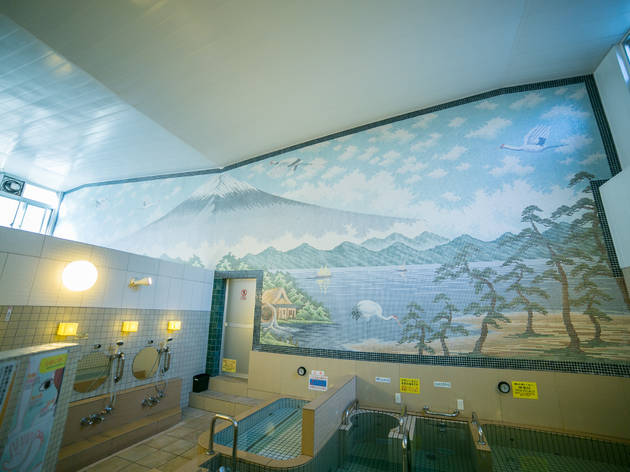 The art
Opened 60 years ago and recently renovated, Kugahara-yu (久が原湯) features a majestic Mt Fuji mosaic on its bathroom walls. The men’s and women’s sides are decorated with different colour schemes (representing the moon and the sun), but you’ll get a chance to experience both as they rotate the changing rooms every two weeks.
The facilities
A spacious bath with massage jets, warm carbonated bath (from where you can watch TV), hot bath, cold bath, outdoor bath with black onsen water, steam sauna (free) and dry sauna.
Read more 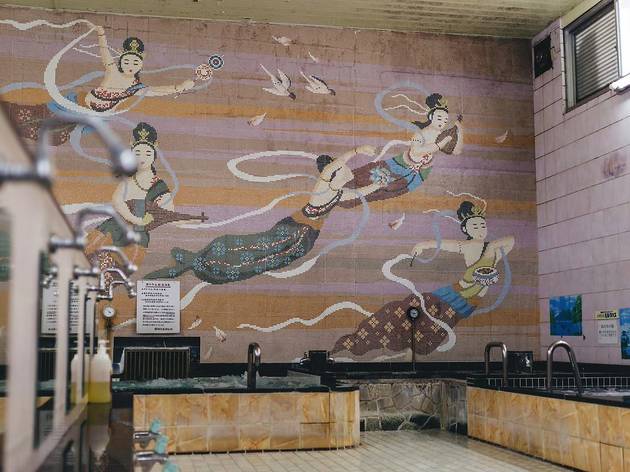 Photo: Stephanie Crohin
The art
We just love the red carpet in the lobby, the big painting of a cherry blossom tree on a golden background, and the charming antique mirrors at the colourfully retro Aizen-yu (愛染湯). In the bathroom, there’s an impressive 40-year-old mosaic featuring angelic, floating nymphs playing flutes and tossing flowers into the air. Sweet dreams guaranteed.
The facilities
Five baths offering different types of massages, a nanobubble bath, ultrasound bath, and sauna available for men. Free wi-fi for 30 minutes per customer. Bath ducks on Sundays.
Read more
Advertising
For more sento images and info by Stephanie Crohin, visit Instagram or www.tokyo-sento.com.
Recommended