Go to the content Go to the footer
Time Out Tokyo
日本語 English
Popular cities London New York Paris Chicago Los Angeles Lisbon Hong Kong Sydney Melbourne Porto Singapore Barcelona Madrid Girona Browse all cities
Sign up to mailing list Search
Perhaps it's because the city is seeing increasing numbers of health-conscious folks who still like to party, but so-called medicinal liquors (yakushu) are currently bubbling under in Tokyo. These curious beverages are usually natural remedies steeped in alcohol, making them potent brews that blend the power of booze with the fabled medicinal benefits – and flavours – of herbs. While we’re not quite sure about the actual healing properties of these concoctions, at least they make for a break from the usual cocktails and beers. These are some of the best Tokyo bars serving up yakushu – hit any one of them to fortify your system with some herby magic before heading to the clubs.
Looking for a more traditional bar? Check out our picks of the very best boozers in town. 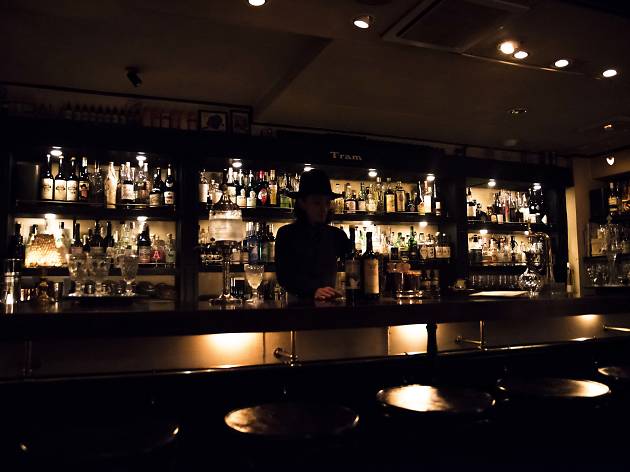 Ebisu’s dimly lit, beautifully decorated Bar Tram specialises in medicinal herbal liqueurs and absinthe and is owned by Takuya Ito, one of Tokyo’s yakushu pioneers. Procuring most of his drinks directly from overseas, he serves up around 70 varieties of absinthe and 30-40 other concoctions. For cold winter nights, we’d recommend the Vertigo cocktail, made with bitter Amaro Averna liqueur and ginger juice. It certainly warms the body and is even supposed to boost your circulation. When pondering your next choice, try asking the bartender for details on the names, histories and flavours of the many bottles lined up behind the bar. 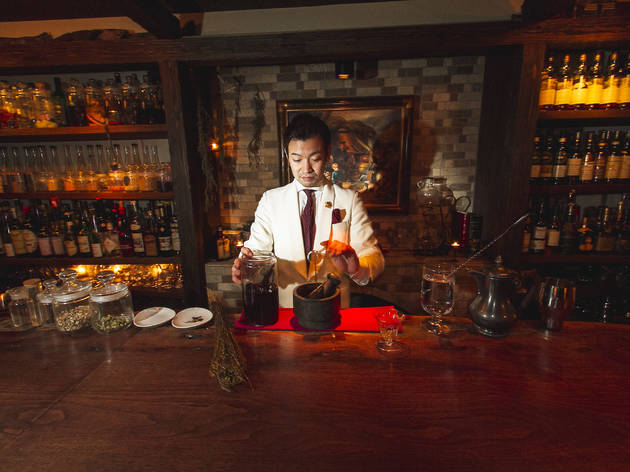 After working for years as the head bartender at Nishi-Azabu mixology bar Amber, Hiroyasu Kayama opened Bar Benfiddich just west of Shinjuku Station in 2013. It’s given him free rein to pursue a longstanding interest in traditional elixirs and herbal liquors, often using ingredients – anise, fennel, wormwood – grown on his family’s plot: look at the shelves behind the counter to see his jars of spices and housemade infusions lined up. Kayama’s apothecary-style mixtures are the main attraction, as he’s as likely to prepare your drink with a pestle and mortar as a cocktail shaker. There’s no menu at Benfiddich, which is decorated in a faux Scottish whisky brewery style, and Kayama says that his recipes are in constant flux.
Read more
Advertising 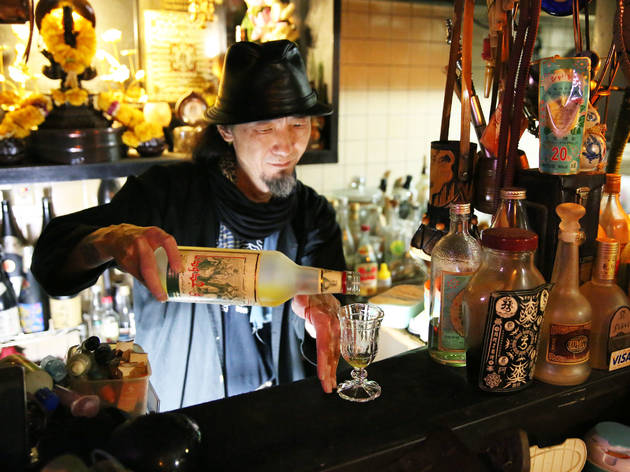 Keep wandering into the residential streets past Asakusa’s moribund Hanayashiki amusement park and you might stumble across this most curious of bars. An austere, warehouse-style exterior leads into a room littered with ethnic instruments, hookah pipes and paraphernalia adorned with Sanskrit text (known as bonji in Japanese, hence the place’s name). The generously tattooed owner has some unusual tipples to go with the shisha, including cannabis vodka, deer antler liquor and a few dubious concoctions that he’s prepared himself. One real rarity is the Coca Buton, a discontinued liqueur made with coca leaves that’s rich in sweetness and, we’re relieved to hear, completely free of narcotics. If you’re ending the night here, go for the Kuwansou Rum, made from the mimosa leaf-like Okinawan ‘ditch lily’ that’s said to be great for curing insomnia.
Read more 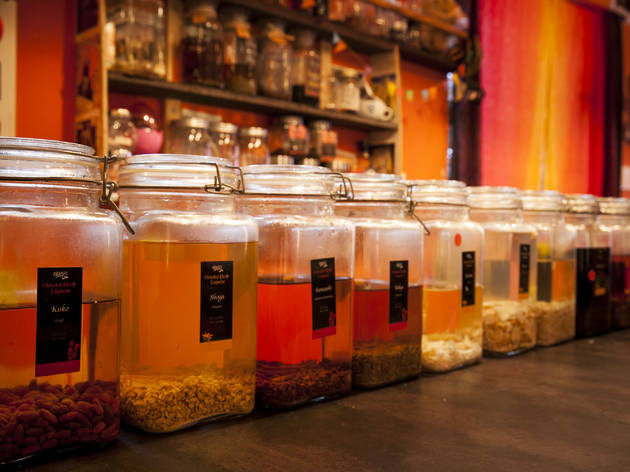 Gatosano, named after the Spanish term for ‘healthy cat’, is a Harajuku bar that’s great for those who find partying hard a bit fatiguing. They cater especially to imbibers who want to ‘live healthily and beautifully from the inside out’, and serve up a range of over 40 shochu-based herbal spirits. Each one is claimed to have a different medicinal property, promising everything from beauty benefits to help with dieting. The stronger, more pungent ones are diluted with ginger ale or other sweeter drinks to make them a bit more palatable. But the one offering here that will really put hair on your chest is the one featuring seahorses – yes, real seahorses – steeped in shochu. Set up by Mr Takada, the owner who also works as an event promoter, Gatosano’s DJ booth occasionally sees visits by top underground spinners. 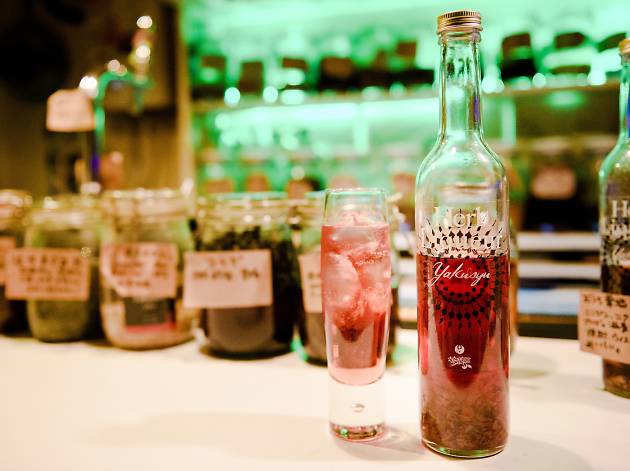 Finding this spot is no mean feat – you’ll first need to navigate the winding streets of Sangenjaya’s Sankaku Chitai and then enter one of the triangular labyrinth’s most narrow alleys to come upon a small door with a green light on it – but the effort will be worth it. Yakushu Bar Sangenjaya, which celebrated a decade in business in 2016, is a six-seat, counter-only boozer specialising in herbal spirits flavoured with ginger, goji berries, lemongrass, lavender, broiled eel and much more. The drinks variously tout beauty, anti-fatigue and stamina benefits – tell the friendly bartender how you’re feeling and he’ll pick out a mixture to right your wrongs. If you like the experience, consider also checking out their branches in Koenji, Asakusa and further afield: there are now a total of 13 Yakushu Bars in Japan.

Opt for a bar with a view 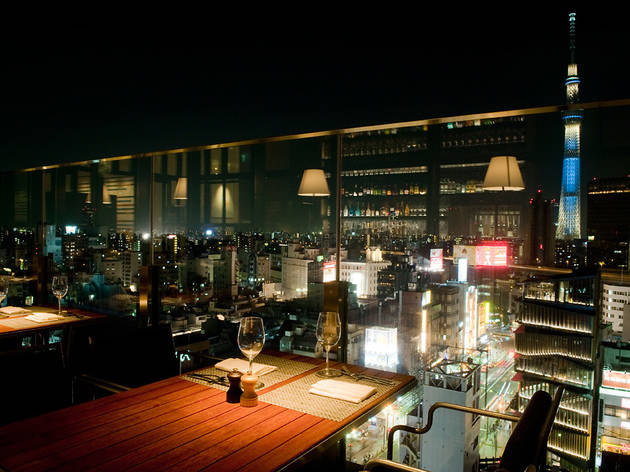 Get a taste of the high life at these fine establishments