Director Gakuryu Ishii (formerly known as Sogo Ishii, born in Fukuoka in 1957), hails from the same generation as punk rock progenitors like the Sex Pistols and Japanese bands like The Stalin and The Roosters. For decades, Ishii has been translating punk's high-energy, do-it-yourself spirit to filmmaking with features, shorts, concert films and music videos that have earned him a reputation, at home and abroad, as one of Japan's most daring filmmakers.

From March 13-25, the National Film Centre is celebrating Ishii with a retrospective of his feature films and shorts, from Crazy Thunder Road (1980), released when the director was only 23, to That's It (2015), starring Shota Sometani.

We caught up with Ishii at the Film Centre for a wide-ranging discussion about punk, Tokyo, dreams and dragons.

You're known as a 'punk director'. Do you remember the first time you heard punk rock?

Yes, I remember it clearly. It was the Sex Pistols. I was so poor back then, I didn't even own my own record player. I heard it at a friend's house. I didn't quite get it at first, but it really stuck with me. A lot of things were like that for me at the time. Someone played me Bob Marley, and with him, too, I thought 'what is this?' at first. But I slowly realized this music was going to be something important to me.

I was in a band in high school, but that was before we'd really heard the word 'punk'. When I think about it now, I was hitting the guitar, bleeding all over, making these discordant noises... If I'd known what we were doing was called 'punk', I might've felt like I could continue doing it. I had no idea.

Why did you decide to pick up a camera?

I had an interest in films from an early age. I wasn't good at music, or at writing, but I had the feeling if I picked up a camera, I could somehow express myself with it. I enrolled in a university where I could study filmmaking, bought a camera and started making films right away. The first was Panic High School. I didn't think it was very good, but I had the feeling if I kept at it, I might be able to achieve what I wanted.

When I showed the film, people around me said it was interesting. It was the first time anyone had ever praised me. For me, that was like ecstasy. I thought, 'this is it, for sure.' Since I was a kid, I'd had a strong desire to express myself, but I wasn't sure how to do it. Filmmaking was the first time it all came together. Then punk came into the picture.

That's when you combined that punk spirit with film?

Right. The Sex Pistols, Einstürzende Neubauten, a lot of the people in those bands were the same age I was. There were young people out there in the world thinking about things the same way I did. That was a huge source of encouragement. It was as if punk gave me permission to put myself out there. It was the idea that expressing yourself was more important than technique.

There's a lot of films in this retrospective – I'd like to touch on a few. Tell me the word that first comes to mind when I name a film. 'Crazy Thunder Road' (1980).

Initial impulse. (Laughs) I was 22 when we shot it.

I read everyone worked for free?

That's right. There were even people who paid [to work on the movie]. (laughs) The film was my graduation project, and I made it with fellow students and my own production group. We called ourselves 'Kyoueisha' – 'Crazy Film'.

Does 'bad dream' refer to the story in the film? Or your own...?

Before Angel Dust came together, I went to London for about a year, and traveled the world a bit. When I came back to Tokyo, it felt like a totally different city. This colossal manmade metropolis that stretched on past the horizon. It was both beautiful and horrifying at the same time.

And when I got on the Yamanote Line, that feeling of dread got even stronger. I felt cruelty, even a kind of bloodthirst, from the people on the train. This was right before the Aum Shinrikyo train attack, and you could almost feel the danger in the air.

The film centers around a series of killings on the Yamanote Line. It came out in the fall of '94, and Aum's attack happened in the spring of '95. The people who perpetrated that attack were about the same age as me. The violence people like me were portraying in fiction, they carried out in real life. That was a huge shock for me. It changed the way I approached filmmaking.

I had the feeling the way I'd been making films up to then was a bit too self-taught, as it were. I decided to go back and relearn filmmaking from the ground up.

Japanese moviemaking had really changed, and once again, it had gotten harder to make the kind of movies I wanted. There's the so-called production committee system, where companies come together to fund a movie and share the risk, and it doesn't produce anything but mediocrity. If you want to do something with originality, you've got to do it yourself.

Right around then, I had an offer to teach at a university, and I also realized moviemaking was about to undergo a huge shift because of digital technology. I decided to apply myself to learning digital for a while, and to work on training the next generation of filmmakers.

As for my name, when I was making Isn't Anyone Alive?, it felt like nothing I'd done before, and I felt like my old name didn't fit. I decided to go for it and change my name to Gakuryu (dragon). I'd wanted to use it for a long time, actually. It's a symbol – of energy, of wildness. At the same time, there's a benevolence to it. Dragons aren't just evil – they have a kind of sacredness to them as well. That combination of ferocity and spirituality is something I'm really into. 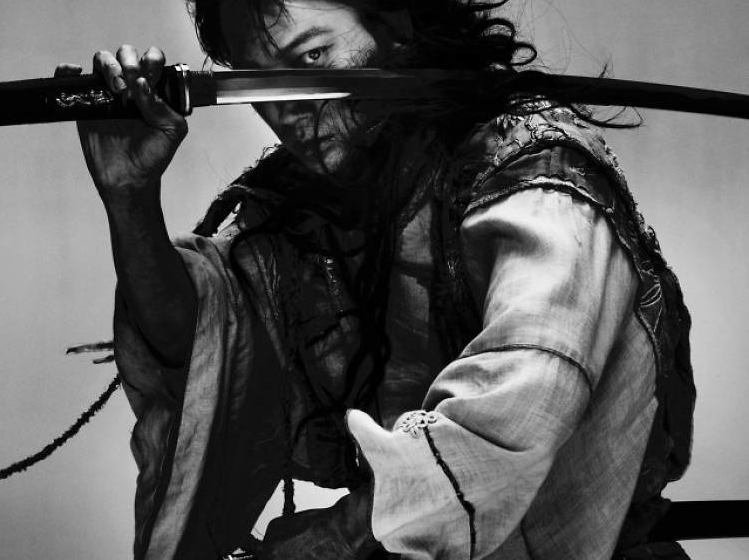 You have a new film coming out this year. Can you tell us a bit about it?

The keyword is 'totally unexpected'. Or maybe 'mythical'. The English title is Punk Samurai Slash Down, but it's not a splatter film.

It's based on the novel by Kou Machida?

Yes, it's a real piece of literature, but these days Japanese films are all about spectacle. There's the producers, who want pure entertainment, and me, the director, who wants to do something avant-garde. We're locked in constant battle.

How far in the process are you?

We're putting the CG and sound effects in now. It's the first time I've used so much CG. They're some really weird effects, by the way. Like nothing you've ever seen.

More details on Gakuryu Ishii's retrospective can be found here.