Set in the once quiet seaside village of Taiji in Wakayama prefecture, A Whale of a Tale is more than another polemic on that small community’s now infamous dolphin-hunting practice. Directed and produced by Megumi Sasaki (Herb & Dorothy), a Japan-born, New York-based filmmaker who spent six years getting her head around the topic, it explores how Taiji became a worldwide synonym for animal abuse after Louie Psihoyos’s film The Cove won an Oscar for Best Documentary in 2009.

Sasaki set out to hear all sides of the story, interviewing the Sea Shepherd activists who travel to Taiji from across the world to protest the hunt, the fishermen and other townspeople just trying to go about their business, and several key characters on the sidelines of the controversy.

The result is a multifaceted story that blends interpersonal drama, political analysis and everyday comedy, challenging the viewer to question his or her own biases and ponder if co-existence is possible in the face of conflicting opinions and extreme attitudes.

With A Whale of a Tale set for a September 9 release at Shibuya’s Eurospace, we caught up with Sasaki to talk whales, dolphins, diversity and the difficulties of documentary filmmaking. A Whale of a Tale is your second feature film and third documentary. What inspired you to get into the genre?

I used to work in journalism, so taking up this medium was a logical next step. I’ve also been a writer and photographer, and have always had an interest in true stories.

How do you communicate with your subjects, and are there any policies you follow?

It all starts with getting them to agree to be featured. Appearing in a documentary is something that can change a person’s life completely, so I feel a heavy responsibility in that regard.

Most of the people in Taiji are suspicious of foreigners, so seeing us interview Sea Shepherd members didn’t exactly endear us to the townspeople. But filming in secret would have made us seem even less trustworthy, so I purposely interviewed the Sea Shepherd people right in front of the fishermen.

I also made sure to tell the activists that I decided to make this movie because I felt that Taiji hadn’t been treated fairly [in the media]. I emphasised open communication with my subjects – something that was possible because I made sure to ask them what they wanted and what they were afraid of.

So the portrayal of Taiji in The Cove drove you to film A Whale of a Tale?

I actually went to see The Cove in New York in summer 2009, but left with a lingering sense of confusion. It was a visually stunning movie, one with a well-crafted story, so I felt sad for the dolphins and thought the hunt was cruel.

On the other hand, I had an unpleasant feeling that not everything was right about the portrayal. In the US, every issue has two sides: people are either for or against abortion, guns and so on. But here, virtually everyone was against the whale and dolphin hunt.

I didn’t care whether the hunt itself was good or evil, but felt that minority opinions – those of Taiji’s fishermen and other inhabitants – were being ignored. So one of the main aims of this movie is to give a voice to those whose voices hadn’t been heard before.

Whatever one’s opinion on the hunt, it’s clear that your portrayal of it is a very neutral one. How did you go about maintaining a fair perspective?

The word ‘neutral’ might have an attractive ring to it, but I never use it myself. Everyone has their opinion and way of thinking, so being truly neutral is almost impossible. In terms of maintaining fairness, it’s crucial to constantly question yourself and never believe that you’re absolutely in the right – I’m very conscious of such an approach. You first went to Taiji in 2010, right at the start of dolphin-hunting season. What was the town like back then?

I actually first visited Taiji in June 2010 in order to get the locals’ permission for my project. I went back on September 1 that year, just as the hunt was being kicked off, and several foreign activists were already on site. Then you had a local political group driving around in cars with loudspeakers, the police, coast guard, camera crews…it was a spectacle.

One of your protagonists is Jay Alabaster, a former AP journalist who moved to Taiji after first visiting the town on an assignment. Why did you choose to focus on his story?

Right, in a way he’s my conduit: his words express what I want to say with this movie. I’m Japanese but have lived in the US for decades, while Jay is American and a long-term resident of Japan, so we have a lot in common. I think we share the ability to look at this issue from a somewhat broader perspective.

Sea Shepherd and other activists have clearly affected Japanese public opinion, but the results haven’t always been in line with the activists’ aims. How do you see their impact?

When foreign anti-whaling and anti-dolphin hunt activists show up on the news here in Japan, many people who’ve never even eaten whale feel like they need to stand up and protect their ‘culture’. So if such activism didn’t exist, it’s theoretically possible that whaling culture would just die out naturally. After all, demand for whale meat is decreasing, the whaling ships are decaying and the fishermen are growing old.

Taiji right now is bearing the brunt of worldwide anti-whaling sentiment. Some people even say that ‘if Taiji falls, it’ll be the end of Japan’s traditional whaling culture’. In other words, the town has turned into something of a final fortress for the issue. And because of that, even whalers who’d like to quit and do something else feel public pressure to keep going. Sea Shepherd works to protect whales and dolphins, but your film suggests that their activities are disrupting the lives of Taiji’s inhabitants.

Well, whales are a huge part of Taiji residents’ identity. Although not many families actually eat whale meat, kids tell their friends how ‘grandma has a whale tooth at home’ and things like that. This shows how the whale-related culture is transmitted to the next generation in Taiji. So the question is what happens when you take that away.

Alaska’s inuits were in a similar situation, as the pressure on them to end whaling led to many fishermen succumbing to alcoholism and the like. So I do feel it’s important for anti-whaling and dolphin activists to take this identity perspective into account.

In the end, A Whale of a Tale zooms in on questions of co-existence, tolerance and diversity. How do these themes relate to modern-day Japan?

Having lived in New York for a long time, I feel like that city’s understanding of diversity is a bit different from the Japanese interpretation. Going beyond issues of sexual minorities, women in the workforce and so on, true diversity is about how to co-exist with people you dislike and disagree with.

Especially in Japan, doing something differently often leads to people questioning your common sense. That can feel suffocating at times. In New York, diversity is such an obvious thing that you don’t even pay attention to it. In this sense, New York and Taiji are perfect extremes.

Finally, do you think this film can help bridge the communication gap between the two sides, and between Japan and the world?

For one, it’s aiming to make that process of communication more open. It doesn’t express support either for or against whaling or the dolphin hunt. Some people might not feel satisfied after watching it, especially if you expect a documentary to take a stand for something. But I hope it can help people, including Japanese who are against whaling, come out with their own opinions.

A Whale of a Tale (Okujira-sama) opens at Shibuya’s Eurospace on September 9. See more details on the film’s official website.

Catch a movie outside 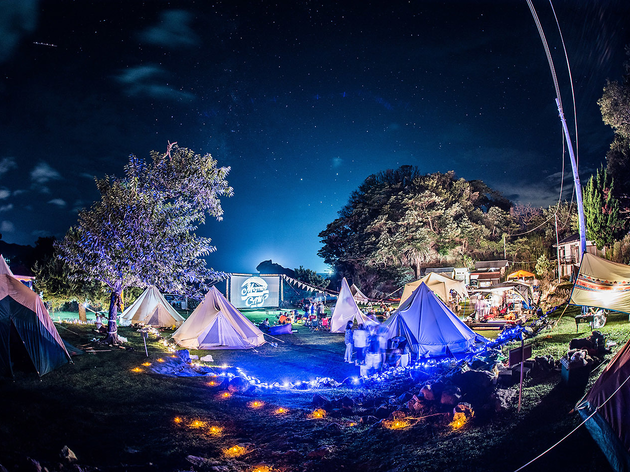