Take a cinematic tour of Tokyo

We’ll begin at Rainbow Bridge (3-33 Kaigan, Minato), traversed by Lucy Liu and Uma Thurman in ‘Kill Bill’, and an apparently dishonest taxi driver in ‘Lost in Translation’ (both his starting point and destination are on the opposite side of the city in real life). You can cross the bridge from east to west in 30 minutes on foot but we recommend taking a taxi across and straight to our next location, Zojo-ji Temple, which was the Tokugawa family temple during the Edo period and the scene of the funeral procession for 2013’s slash-em-up film ‘The Wolverine’. Though the two-storey sanmon (temple gate) features predominantly during the procession, the battle that followed was actually shot at the Chinese Garden of Friendship in Sydney. 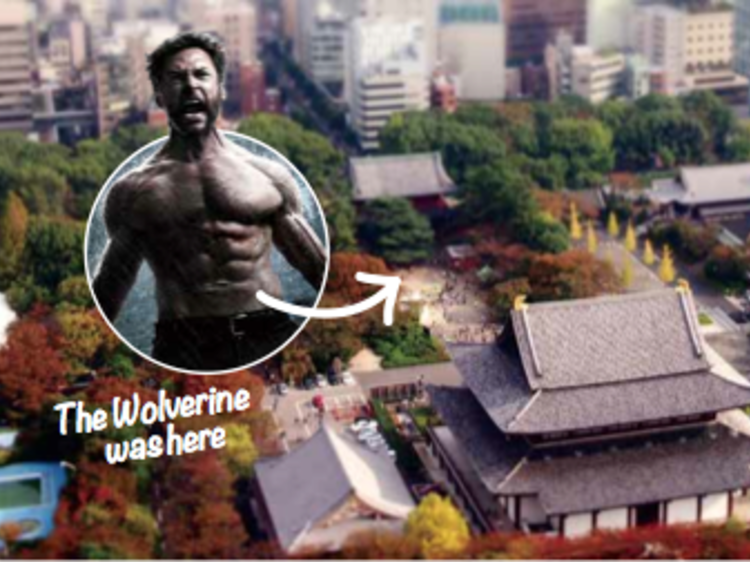 Photo: Jeepney/Pixta
Next we’re off to Hiroshima, but don’t get comfortable – in the movies it’s only two stops north on the Yamanote line. The unmistakable Nakagin Capsule Tower (8-16-10 Ginza, Chuo), a few blocks east of Yurakucho Station, served as the ‘Hiroshima’ love hotel in ‘The Wolverine’. Close by is one of the department stores destroyed by Godzilla – Wako – and ‘Jiro Dreams of Sushi’s’ eponymous chef plies his trade at Sukiyabashi Jiro, just around the corner.

A little further from the station, perhaps a 20-minute walk heading northwest, is the Imperial Palace and its gardens, in which Tommy Lee Jones strolled around as General MacArthur in 2012’s ‘Emperor’. Three more stations up the Yamanote brings us to Akihabara and the area’s main street Chuo-dori, where the most recognisable section of ‘The Wolverine’s’ post-funeral chase scene takes place. One station west on the Sobu line is Asakusabashi, where you can find the balcony (1-2-1 Yanagibashi, Taito) Peter nonchalantly plunges from at the start of ‘The Grudge’. Two stations west and you’ll be in Ryogoku, home of the national sumo stadium and meeting place for James Bond and Aki in ‘You Only Live Twice’.

We’re heading all the way across town to Shinjuku next, preferably via directors’ favourite Yasukuni-dori, the avenue featured most prominently in a ‘Tokyo Drift’ street race. At the nearby Park Hyatt Hotel, take the elevator to the 52nd floor where the New York Bar awaits and the views are as superb as they appear on screen. You’re probably ready for dinner by now, and where better than Gonpachi Nishi-Azabu, the site of the ‘Kill Bill’ restaurant massacre? Take the Oedo line to Roppongi and dine under the paper lanterns and bamboo awnings that inspired Quentin Tarantino to build a similar set in China. Afterwards, take the Ginza line to Shibuya where, if you’re still hungry, you have a choice between two of Bob Harris’s (Bill Murray) fave spots: yakiniku restaurant Shabuzen (B1 Shibuya Creston Hotel, 10-8 Kamimayacho, Shibuya) or Ichikan (Sun View Heights Daikanyama Bldg, 9-5 Daikanyama, Shibuya). Though Ichikan isn’t cheap – the most budget-friendly course is around ¥6,000 – there’s a chance you’ll meet the chef from the movie, who owns the place in real life. If you choose Ichikan, be sure to head to nearby nightclub Air, also featured in ‘Lost in Translation’. Closer to Shibuya Station are two nightlife venues from ‘Babel’: Womb, the setting of the surreal nightclub-in-silence scene, and J-pop Cafe where Chieko flashes her ‘hairy monster’.

Once you’ve had enough of professionally sung music, make your way to the Shibuya branch of Karaoke-kan (30-8 Udagawacho, Shibuya) and ask for room 601 (you may need to book beforehand). As the plaque on the wall boasts, you’ll be warbling in the same booth Johansson and Murray once did. Best of all, it’s open until 6am, meaning you can stay there until your first train returns you to your bed and, most likely, a hungover day of watching movies set in Tokyo.