Tea is an art form in Japan. There’s often a formality associated with the serving and savouring of tea, whether it’s during sado (a traditional tea ceremony), at a tea salon or simply at home. Tea is more than just a beverage; it is a mindful experience.

There are three broad categories of green tea: matcha, sencha and gyokuro. Matcha, a vivid green powder which boasts a rich flavour and an umami-sweet aftertaste when whisked with water, is made from tea buds grown entirely in the shade. After harvest, the leaves are steamed and dried before being ground into powder.

Sencha, on the other hand, is the most conventional green tea in Japan. Its shrubs are exposed to direct sunlight and its leaves are steamed, pressed and rolled after picking. The green tea of the highest quality, gyokuro is made from sprouts that have been covered for about 20 days pre-harvest. To enhance their flavour, the leaves are steamed before being dried and rolled.

To enjoy all the distinctive types of Japanese green tea, or even some cool new creations, head to these tea salons in Tokyo.

RECOMMENDED: Where to drink tea cocktails in Tokyo, plus the city's best coffeeshops 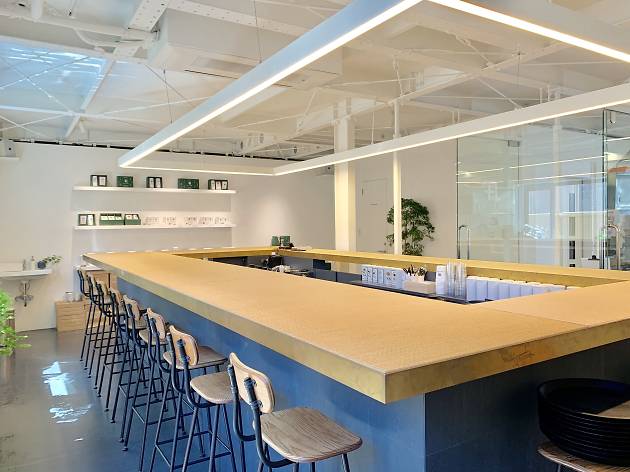 This tea salon’s bright and modern interior belies its historical roots: it is run by the famed Kaneju tea plantation in Shizuoka, which has been around since 1888. While single-origin and blended green tea are its calling cards, Kaneju Farm Omotesando also offers new andinventive takes on sencha.

Take a seat at the tatami mat-lined bar and order the latte-style sencha (¥750). A twist on the common matcha latte, Kaneju’s version uses sencha powder, freshly whisked to create a dark green drink, and then topped with an airy cream cheese and whipped cream mix, which balances the tea’s earthy, grassy and fragrant-bitter notes with a gentle sweetness. Kaneju also offers seasonal tea, with cherry blossom-themed drinks in spring and fig-flavoured beverages come autumn.

You can also create your own blend of flavoured Japanese green tea. Simply choose a base tea, such as sencha or low-caffeine tea, and then add three out of 20 different kinds of herbs, spices and flowers, including sansho and cayenne pepper. And if you’re looking forsomething stronger, former bartender Matsumoto can also shake up some green tea cocktails, such as a refreshing sencha gin tonic. 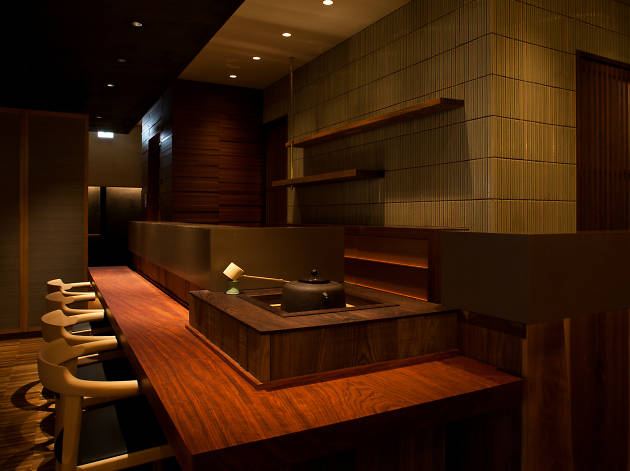 A household name in Japan, this Kyoto-based family business has been dealing in Japanese green tea for over three centuries, focusing on tea leaves cultivated in Uji near Kyoto, a region synonymous with top-notch matcha. Uji’s stellar reputation is credited to its conducive soil and climate, which help produce consistently high-quality tea every harvest.

At this Tokyo shop and tearoom, Ippodo has a unique approach to serving matcha in two ways: first as a thick, almost syrupy, tea known as koicha (from ¥1,620), and then as a ‘thin tea’ called usucha. Of course, there are other options too, from gyokuro and sencha to hojicha (roasted green tea) and genmaicha (roasted rice green tea). It will be a hands-on experience as the staff will guide you to prepare your own pot of tea.

Get the elaborate tasting set (¥7,560) if you’re interested in savouring five different types of Japanese tea in one seating. Loose-leaf teas are available to purchase, too, and you can always ask for a tasting before making a decision. 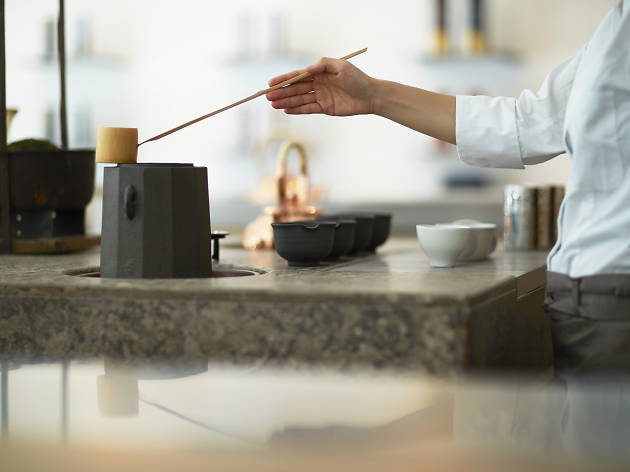 An elegant white space accentuated by clean lines, warm wood and natural stones, Yamamotoyama Fujie Sabo is a modern, elegant take on a traditional Japanese tea house. The good looks also come with a great pedigree, as the brand has existed for nearly 330 years.

Opt for a sencha set with wagashi (Japanese confectionery) and you can choose from a variety of single-origin teas. We recommend the kawane-cha from Shizuoka (¥1,600), famed for its refreshing aroma and mild flavour; the rich and aromatic yame-cha from Fukuoka (¥1,600); and the organic kirishima-cha from Kagoshima (¥1,500). Otherwise, splurge on the premium Uji gyokuro (¥2,300), a bold green tea with a sweet aroma.

It’s possible to upgrade your tea time with a full meal at Yamamotoyama Fujie Sabo. The menu features classic Japanese dishes such as nori noodles (¥2,800) and a sushi set (from ¥3,200), both made with premium nori (roasted seaweed). 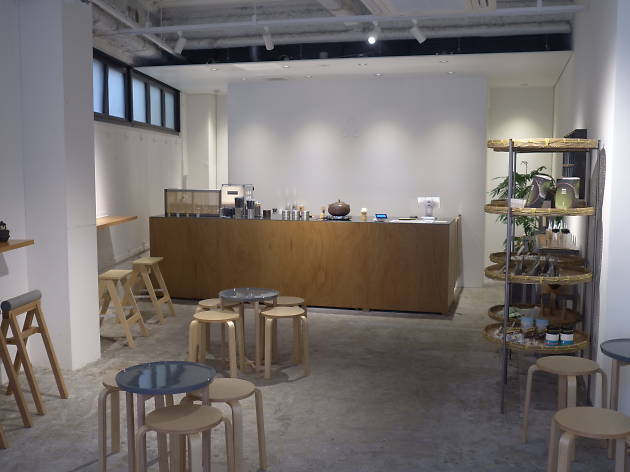 A peaceful haven close to the frenetic Cat Street in Harajuku, this pared-down tea house specialises in organic matcha but will appeal most to those looking for trendy new drinks featuring Japanese tea. The Matcha Tokyo Omotesando has all the trimmings of a traditional tea salon but none of the stuffiness: one of its walls is adorned with a calligraphic artwork translating to ‘I love matcha’; there’s a small irori (Japanese hearth) by the window featuring classic tea utensils; even the benches are clad in tatami mat.

We enjoyed the matcha tapioca latte (¥650); it has the unmistakable rich, umami flavour of matcha but is toned down with a dash of milk and slightly sweet tapioca pearls which have been soaked in brown sugar from Kikaijima Island (located between Kyushu and Okinawa). Also recommended is the matcha coffee latte (¥600), which boasts three colourful layers of matcha, milk and coffee. You can shop for matcha powder and tea equipment here, but make sure you also sign up for the Matcha Experience (¥1,000) to learn how to whisk the powderinto tea. 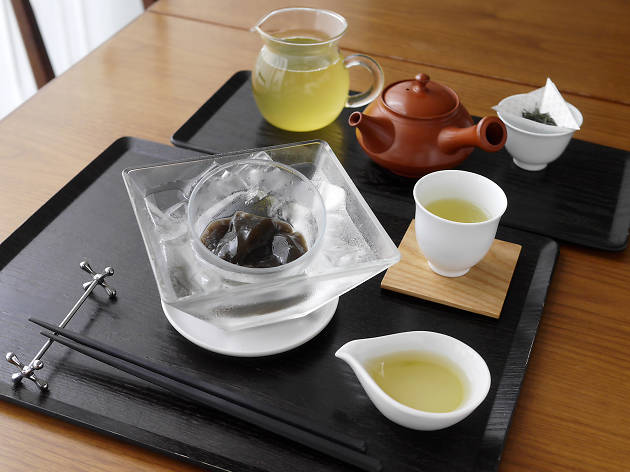 If you’re looking for classic Japanese tea in a café setting, this cosy spot serves up single-origin tea for sencha lovers. The recommended special course (¥1,500) lets you sample the different flavour profiles of a single-origin tea through four steepings – you’ll be surprised by the changes in taste and aroma in the subsequent preparations.

First, you’ll sample the tea leaves as is while a tea sommelier brews your first cup, which is served as an iced beverage. On our visit, we had the Aoitori 2019; its first infusion had a strong savoury taste but a sweet aroma. The next chilled brew, served in a wine glass, boasted hints of jasmine, melon and white wine. For the last two infusions, the leaves had completely opened and the flavour blossomed.

If you’d like to bring home some tea after the tasting, Chachanoma offers 30 different loose-leaf varieties, plus a range of utensils and paraphernalia. 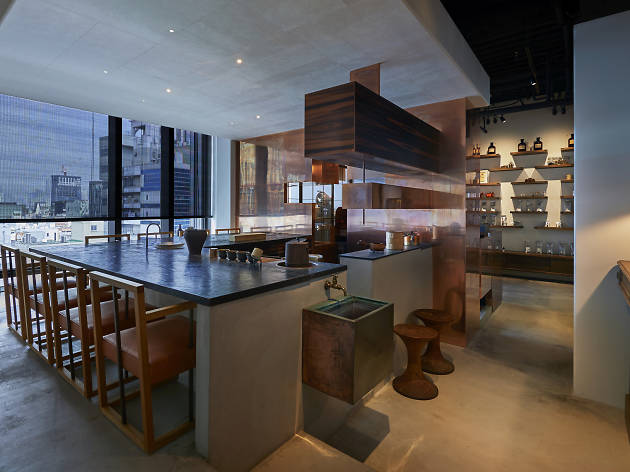 Sakurai is a cool and modern interpretation of a Japanese teahouse, where you’ll experience an almost meditative tea session, complete with some dainty Japanese sweets known as wagashi. You can choose a tea course (from ¥4,800) to sample the different types of Japanese tea, or pick from a selection of green tea grown across the country to have it freshly roasted into hojicha (from ¥1,700). But if you really want to fully appreciate the creativity of the tea masters here, ask for the house-infused tea liquor: sencha-infused gin, hojicha-infused rum, or beer with matcha. 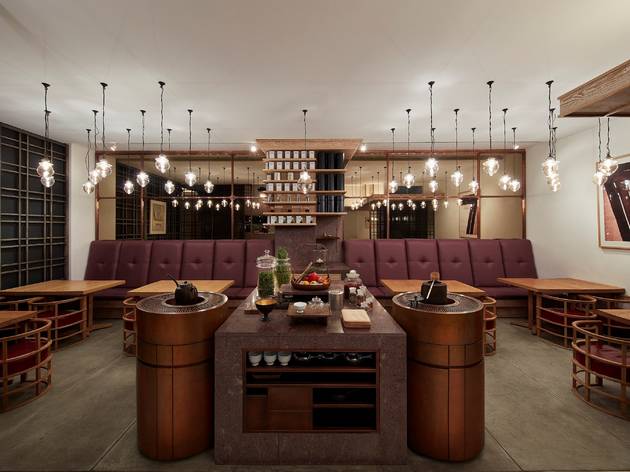 This tea salon puts a fresh twist on traditional Japanese confectionery. As well as the typical combination of green tea and sweets like cold kuzu noodles, the salon also serves alcohol – ask the staff which beer, shochu or wine goes best with your sweets. They also offer a sparse food menu, including a sumptuous lunch tray with five small dishes, miso soup, rice, green tea and wagashi. It's a spot relaxing enough for hours of lingering in busy Ginza. 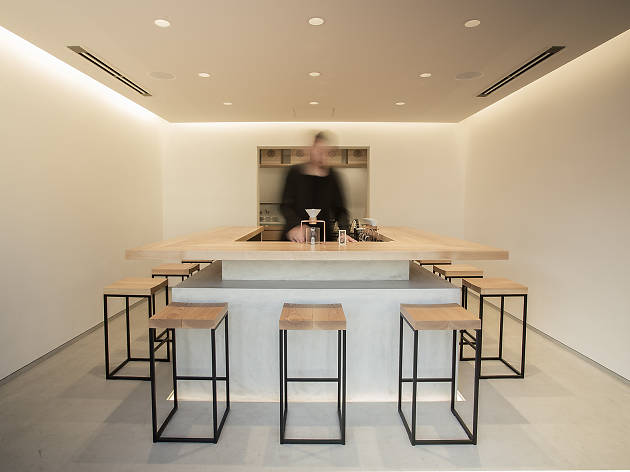 Sangenjaya's austere Tokyo Saryo offers single-origin green tea in hand drip form. The folks behind the minimalist shop have even developed their own tea dripper, which is supposed to help bring out the full flavours of the leaves. If you're looking to further your tea education, order the tasting set and enjoy a wide variety of aromas and tastes – and don't forget to also explore the sweet selection, which includes a tasty hojicha blancmange, dried fruit and ohagi (mochi balls with anko). 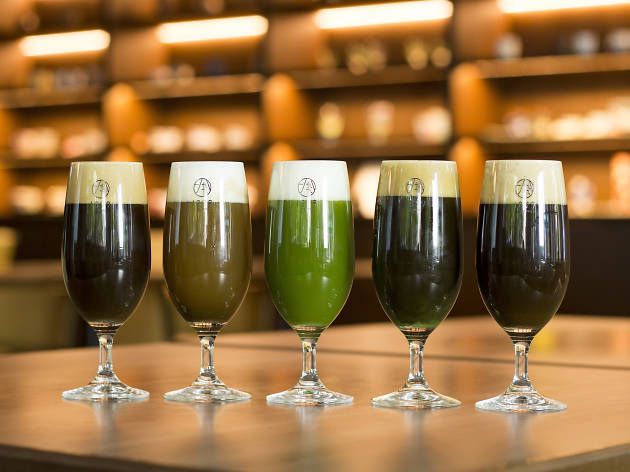 This restaurant in Ochanomizu takes Japan’s obsession with green tea to the next level. Here you can not only drink but also eat green tea in desserts and even savoury dishes. Since green tea’s signature bittersweet umami flavour makes it a versatile ingredient suited to both the sweet and the savoury, it’s surprising that so few restaurants have taken this route.

Try the Italian vegetable dish bagna càuda with a green tea dip (¥1,480), the matcha potato salad (¥500), the green tea-infused sausages (¥2,200 for three types), or the hearty matcha croquettes (¥780). If all this is too leftfield, then stick with the afternoon tea plate, which features more familiar items including matcha ice cream and tea tart. Don’t miss the tea beers (¥790); there’s one version made with matcha and another made with toasty hojicha (roasted green tea). 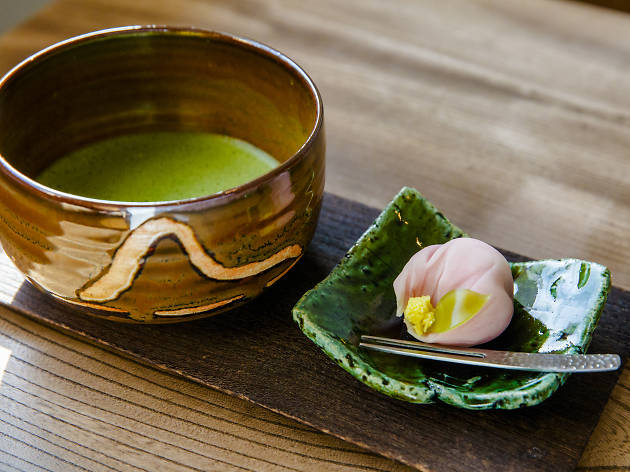 Located next to Gotokuji Temple (aka the 'cat temple'), this small Japanese confectionery shop offers pretty seasonal sweets. Its signature offering, the ao-mame-daifuku (bean daifuku) is the most popular item on the menu – try it at the in-store café along with a cup of plain green tea, matcha or hojicha. All in all, Mahorodo makes for the perfect stop after a visit to Gotokuji. 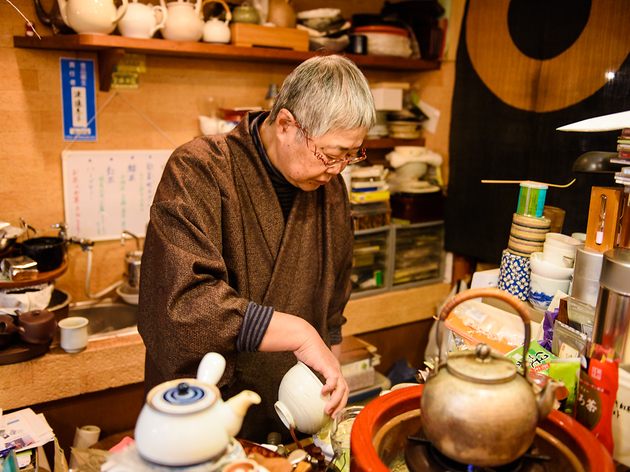 Tea lovers looking for a fine brew will be very excited by this Nishi-Ogi shop, which carries over 100 leafy varieties. From domestic sencha to Chinese and Taiwanese black teas, pu'er and jasmine tea, all varieties are presented in simple bags alongside equally simple vessels, but that simplicity also means that the store manages to strike an overall calm balance.

There's a separate space where you can sit down and enjoy a freshly-brewed cup of sencha, but there's no proper menu: orders consist of your answer to the question 'what kind of drink would you like?' The owner's knowledge of tea is impeccable, and if you end up getting into the finer details, hours will have passed in the blink of an eye. 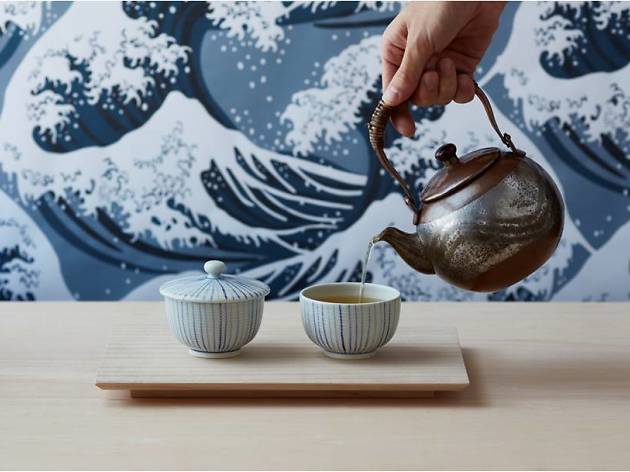 Stylish purveyors of green tea have been having a moment in Tokyo throughout the past few years or so. Following hot on the heels of Tokyo Saryo, Uni Stand and company is Hachiya, opened in oh-so-trendy Sendagaya, specialising in all things Japanese tea. In addition to standard varieties including sencha (regular green tea) and hojicha (roasted green tea), you can sample hand-whisked matcha latte and offbeat mixtures such as sencha soda with fruit jelly. Pair your hot drink with some anmitsu (agar jelly with fruit and sweet bean paste) or a soft-serve for the full Japanese dessert experience. 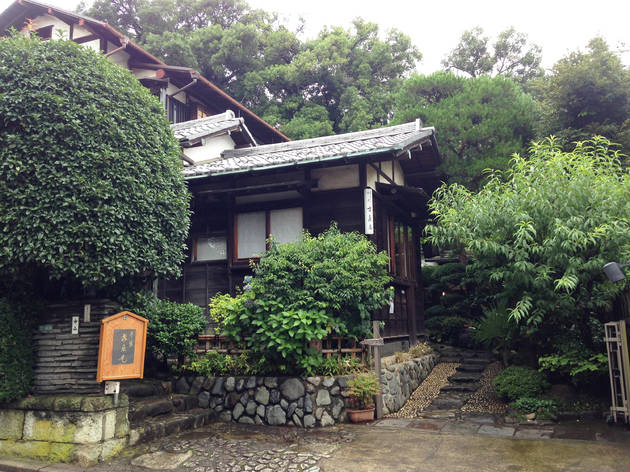 Tea, garden landscaping and a calm space within a massive busy city are all enjoyable at Kosoan. It's the immaculate old Japanese house that you would most likely walk straight past if you didn’t know there was a teahouse inside. They have both Japanese and English menus (the latter with pictures for easier ordering) with set choices basically consisting of a hot or cold drink and a sweet treat. Other than the regular Matcha with Sweet (¥830), which includes bitter, creamy green tea served in a large deep bowl, we’d also recommend trying the Anmitsu (¥830), a bowl of sliced fresh fruit with a dollop of ice cream, sweet syrup and a small serving of tea. 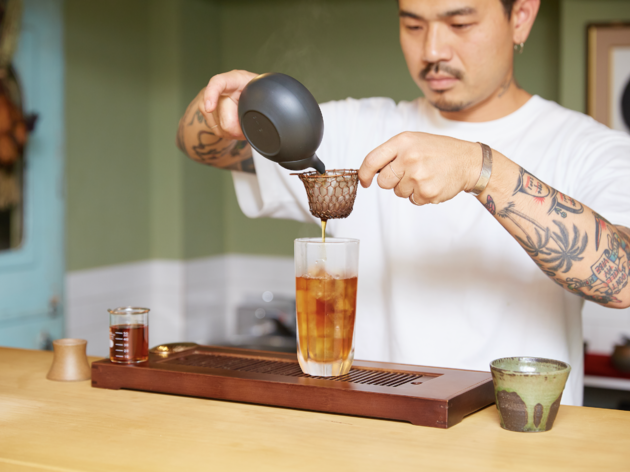 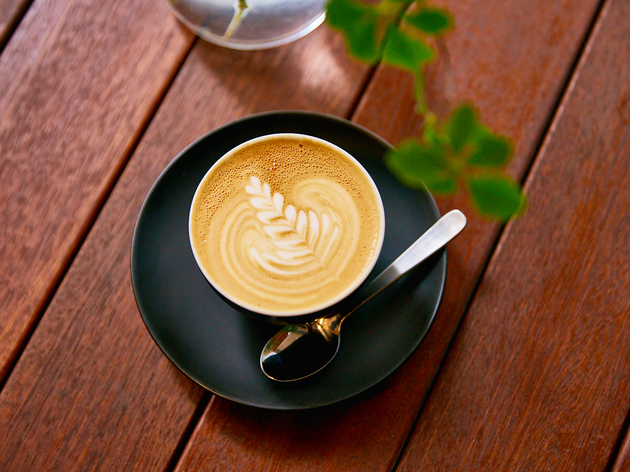 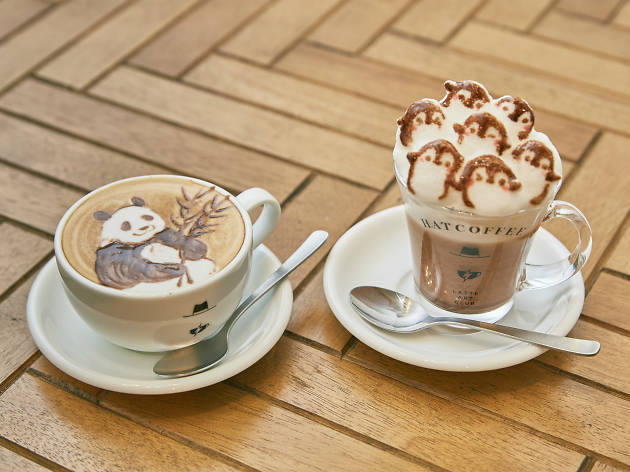 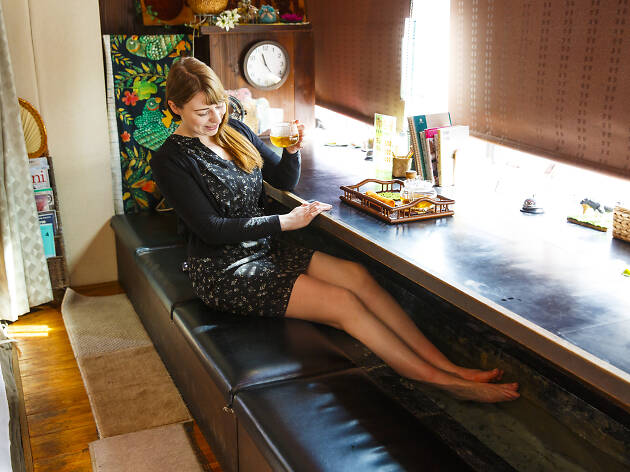 Coffee, tea or... a foot bath? Pamper yourself with all of the above at these relaxing cafés in Tokyo 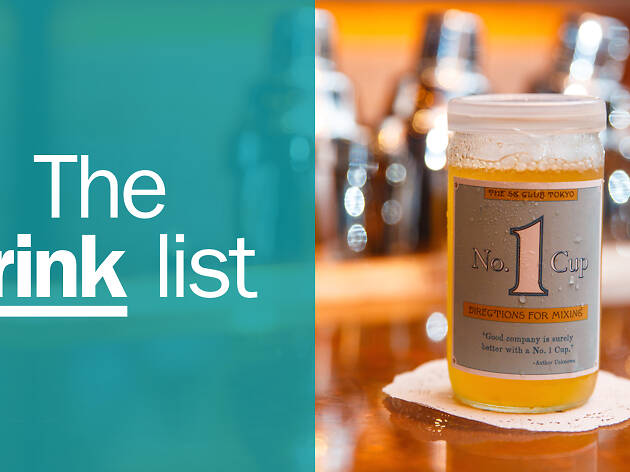 Find the top bars in Time Out's ultimate guide to drinking in Tokyo: from craft beer and wine to sake and cocktails