There's more to these pink and white flowers than you think. Here's the lowdown on sakura in Japan

We've all been waiting for it – hanami that is. But how exactly did these blossom viewings get started? According to Nihon Shoki, the earliest chronicle of Japan, the first hanami banquet dates all the way back to 812. Cherry blossom viewing was originally exclusive to the imperial court and other elites, but it quickly started spreading among the samurai class.

After shogun Tokugawa Yoshimune encouraged people to plant these beautiful trees all around the country in the 18th century, hanami gradually became an entertainment fit for commoners as well. Obviously eagerly anticipated during the cold blaze of winter, the cherry blossoms symbolise spring in Japan, and sakura-themed products take over store shelves nationwide long before the first blooms appear on trees. That you probably knew – but read on for a few less obvious hanami facts.

RECOMMENDED: Your ultimate guide to cherry blossom season in Tokyo

Things to know about the sakura 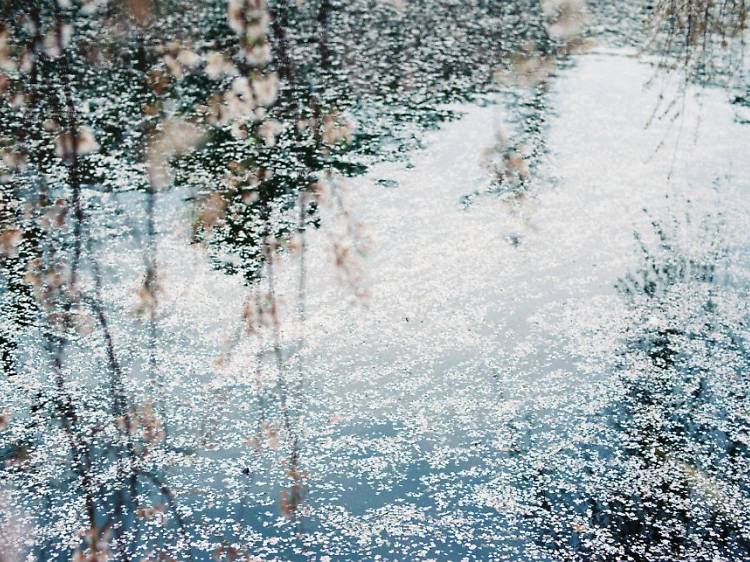 Cherry blossoms are prettier when falling

The 'blossom front' sweeps Japan from south to north, lasting for a mere week or so in each region, and only a handful of days in full bloom. Sad, sure, but the Japanese celebrate the falling petals as mono no aware, an aesthetic ideal that highlights 'the pathos of things', or the beauty in the passing. 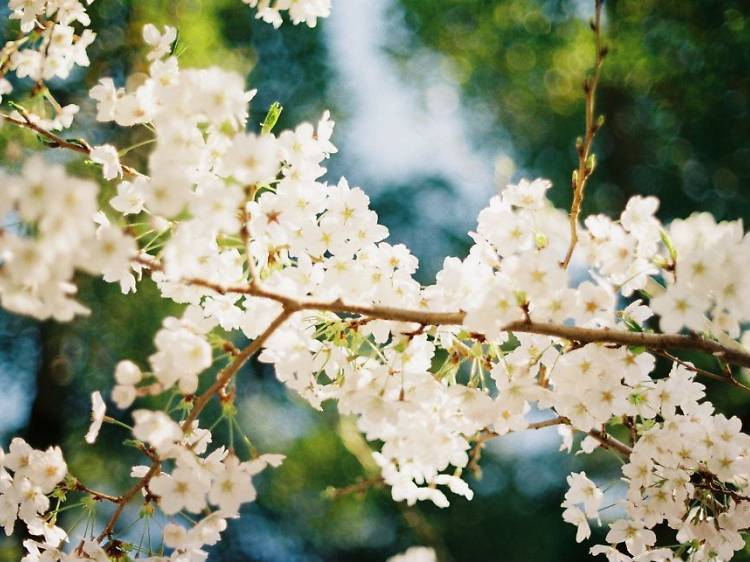 The sakura are not pink

Aren't they? These special flowers get a specific name just for their own shade: sakura-iro, a traditional Japanese colour. In fact, there's a whole range of these colours to describe hues found on kimono, paintings and arts and crafts of the blossomy kind. In reality, sakura do actually come in many different shades, colouring spring with a wide range of pink and white. 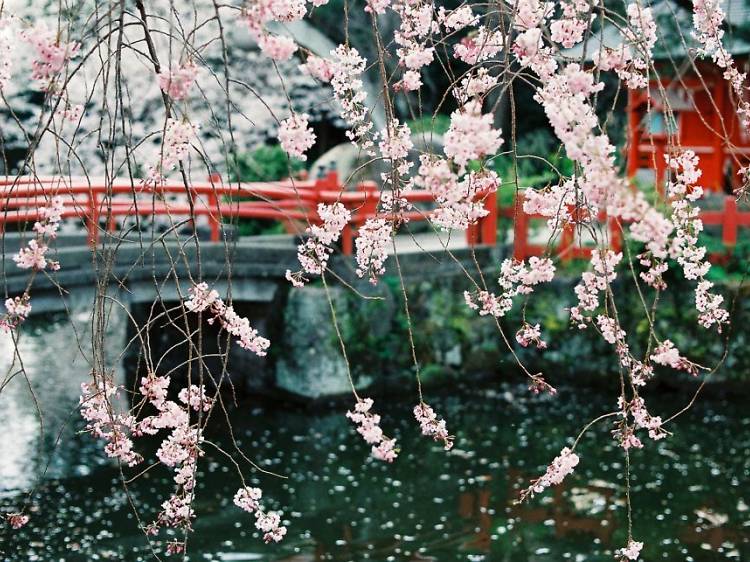 The flowers aren't the centre of attention

The flowers are pretty, and hanami may be all about showing our appreciation for this beautiful season, but every experienced hanami-goer knows it's not the blossoms that matter most.

Hana yori dango is a proverb that literally means 'sweets over flowers' but also translates to 'practicality over aesthetics'. It refers to how people are always more focused on the dango (sweet dumplings), food, beer, or whatever concrete, practical thing is in front of them, than they are on marvelling at the beauty of the flowers. 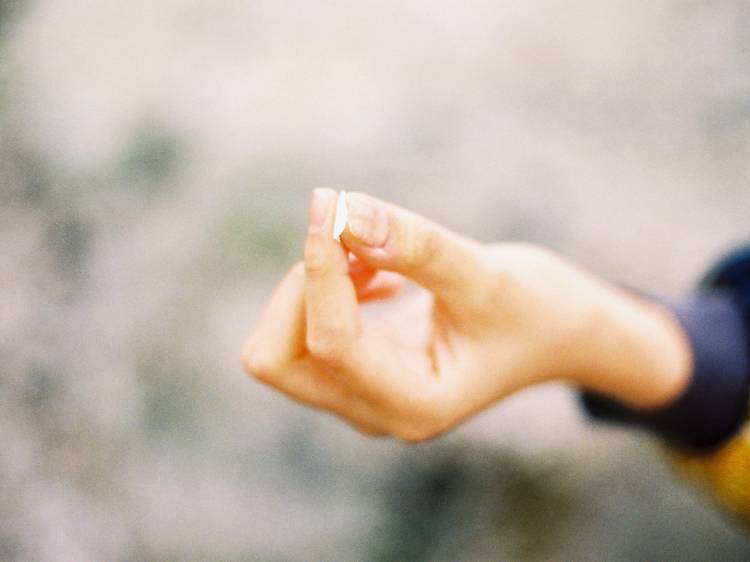 Autumn is a loner

Now, your average hanami snack skewer features three blobs of dango dumplings, which come in sakura-iro, white and green to represent spring, winter and summer respectively. Wait... where's autumn? The common explanation is that this tradition evolved from a play on words since 'no autumn', or aki nai in Japanese, has the same meaning as 'you won't get bored'. But who would actually be bored with the most beautiful season of the year? 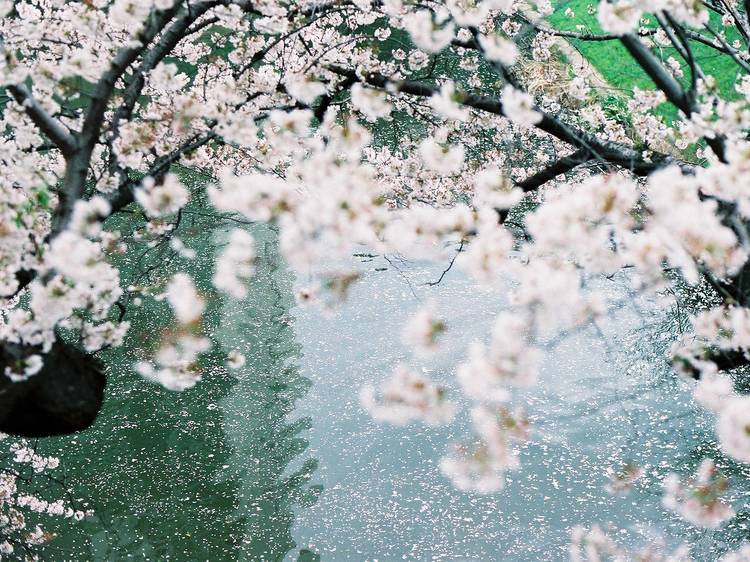 Sakura is not the national flower

A typical blossom season lasts from the end of March to the beginning of April, when the new fiscal and academic year starts. The sakura may be Japan's most beloved flower, but surprisingly it is not the formal floral emblem – actually, Japan doesn't have an official national flower at all.

The country's other representative bloom would be chrysanthemum, which is on the Imperial Seal of Japan. However, the sakura decorates ¥100 coins while chrysanthemums adorn ¥50 coins, so it's pretty clear sakura are more highly valued. 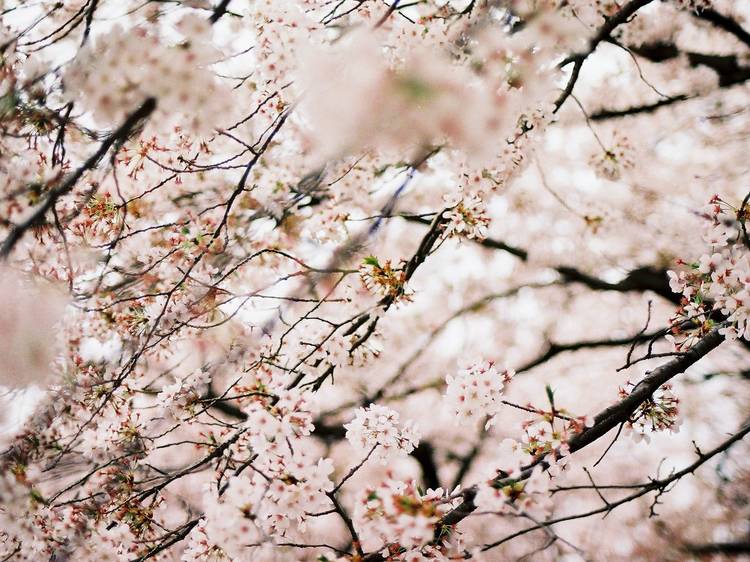 The blossom comes in 11 stages

If you're the type that goes bonkers on where the sakura zensen ('cherry blossom front') exactly is at the moment, you might've noticed that the blossom is described in different stages. The official weather forecast usually employs only seven of these, but a few sakura-maniacs have names for 11 stages of the bloom. In order, they are: budding, bulging bud, flowering, 10%, 30%, 50% and 70% bloom, full bloom, starting to fall, falling, and officially over. Spare a thought for those poor blossom observers. 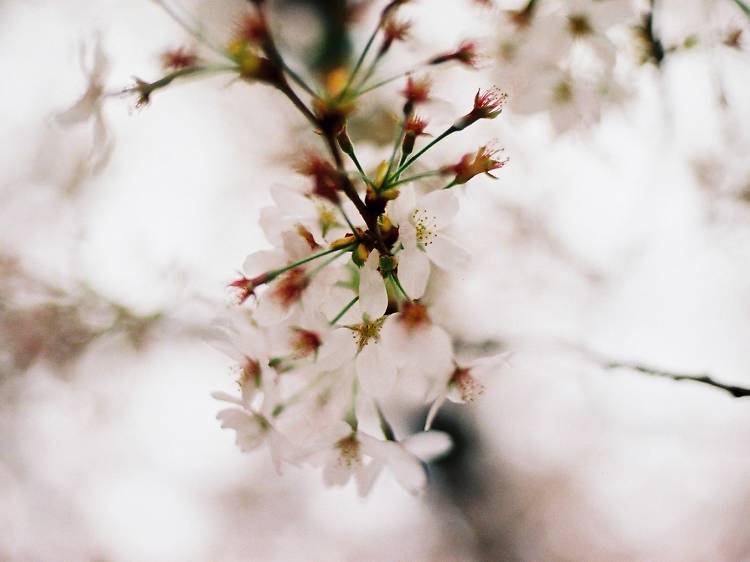 The 'standard' tree is the boss

How exactly do we know when the 'sakura front' hits each region? Well, the Japan Meteorological Agency appoints a 'standard tree' in every area to serve as a benchmark for the announcement and to determine the percentage of the bloom (they have backup trees, too). In Tokyo, one somei-yoshino tree at Yasukuni Shrine takes on this crucial role. When said tree flowers (to be exact, when five to six flowers on the same tree bloom), the whole of Tokyo follows and – boom – it's officially spring. 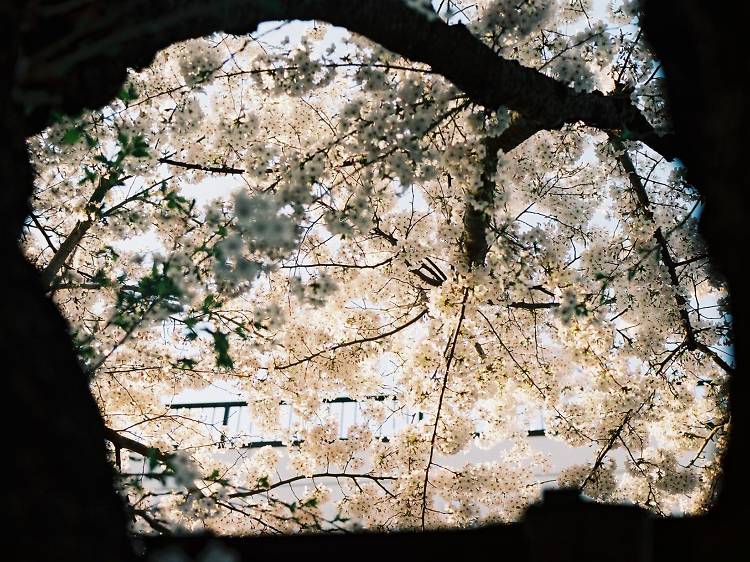 One station on the Chuo line plays a sakura folk song

Every time a train arrives at Musashi-Koganei Station on the Chuo line, the platform speakers play 'Sakura Sakura', a traditional folk tune. Why? Well, way back in the day, the Tamagawa Aqueduct in Koganei was a famed hanami spot that even attracted Emperor Meiji and his entourage. When the Chuo line first opened in 1889, linking Shinjuku and Tachikawa, the Koganei area didn't have a single station. A temporary stop was only set up to accommodate blossom hunters in 1924, while a permanent version opened two years later.

So the tune is a reminder of the beauty of the area's cherry blossoms. Nowadays, you can also find the imperially approved blossoms in nearby Koganei Park. 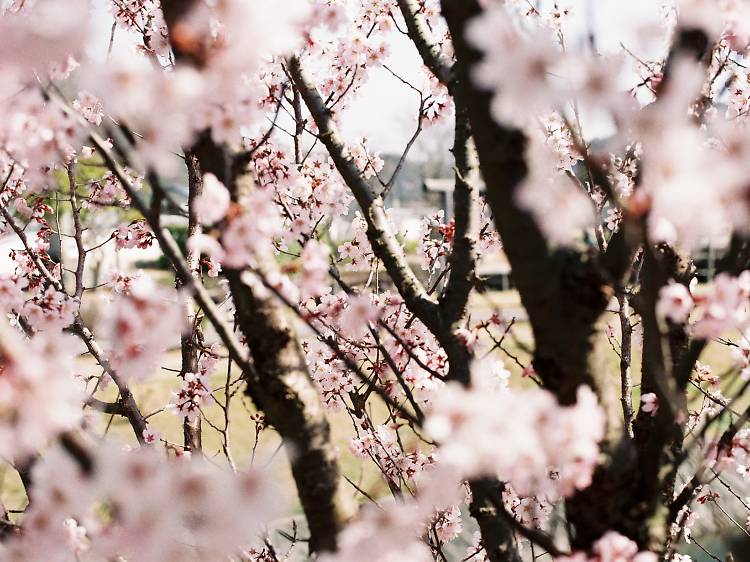 The sakura are better when eaten

The blossom is admired so eagerly that many locals even put it in their mouths. No, not the flower itself – but you'll find hundreds of specially made snacks and sweets named after cherry blossoms: sakura mochi, sakura ice cream, sakura tea...the list goes on. 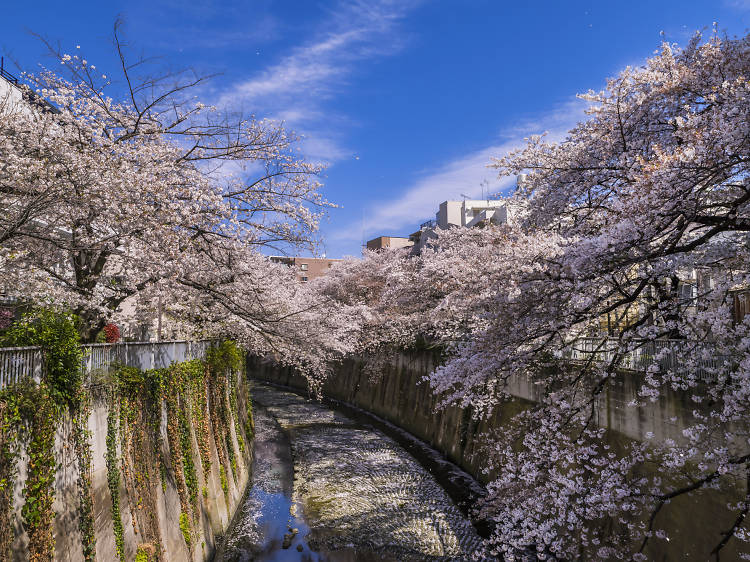 The best places to see sakura in Tokyo

Check out these parks, gardens and venues for the most brilliant cherry blossoms in Tokyo, including Meguro and Shinjuku 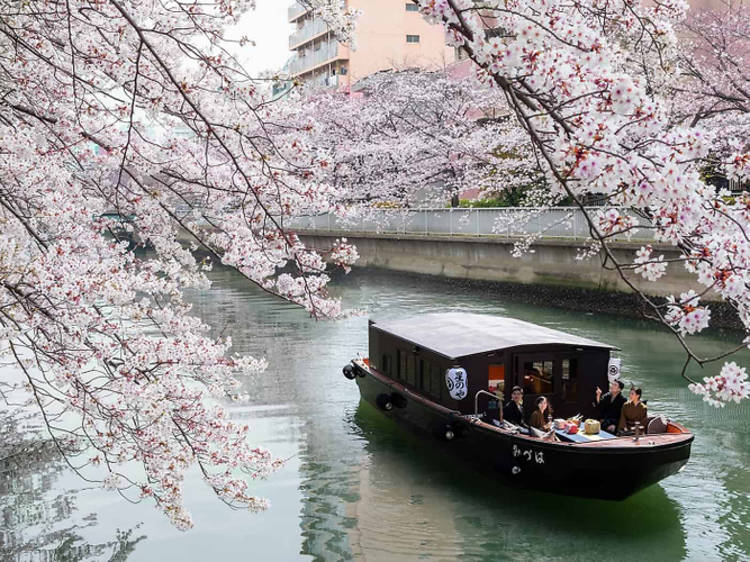 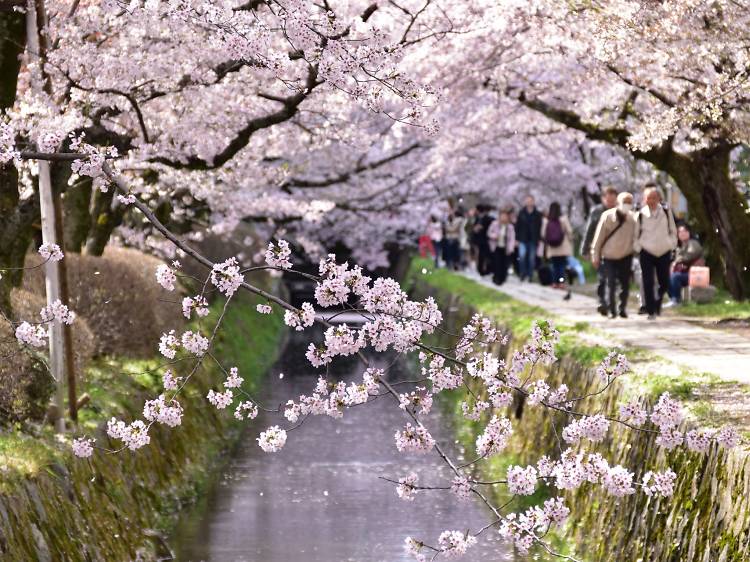 Watch now: these stunning YouTube videos bring cherry blossoms to you wherever you are