Delicious dining and offbeat sights along the Tokaido

Most visitors to Oimachi, located right in the middle of Shinagawa Ward and south of Shinagawa Station, never make it far from the station. This is partially because the area now functions primarily as a hub for seaside transit toward Haneda Airport and Odaiba, but it also speaks to the convenient concentration of restaurants, pubs and cafés on the nearby streets and alleyways. Renowned particularly for its dirt-cheap eats and back-to-basics boozing, the neighbourhood sprawls with thirsty corporate warriors on weekday evenings, but its proximity to the sea means it also offers plenty of value as a day trip destination.

In the Edo era, Oimachi was a minor village on the outskirts of the city, overshadowed by the Tokaido road’s Shinagawa station nearby and remote enough for the shogunate to set up an execution site in the area. Tens of thousands of convicts met their fate at these Suzugamori grounds before the Meiji government closed the site in the early 1870s. From the Meiji period onward, Oimachi developed as a seaside industrial zone until landfill work and changing times left it without either sea or factories. The neighbourhood’s slow, comfortable decline came to a sudden halt when the Rinkai line’s final section opened in 2002, with this direct access route to Odaiba spawning extensive redevelopment around the station. Still, under the occasionally glossy surface lies a town replete with nostalgic hideouts and offbeat attractions.

In addition to the Rinkai line, Oimachi Station is served by the Keihin-Tohoku and Tokyu Oimachi lines. There’s also a free shuttle bus from the station to Shinagawa Aquarium. 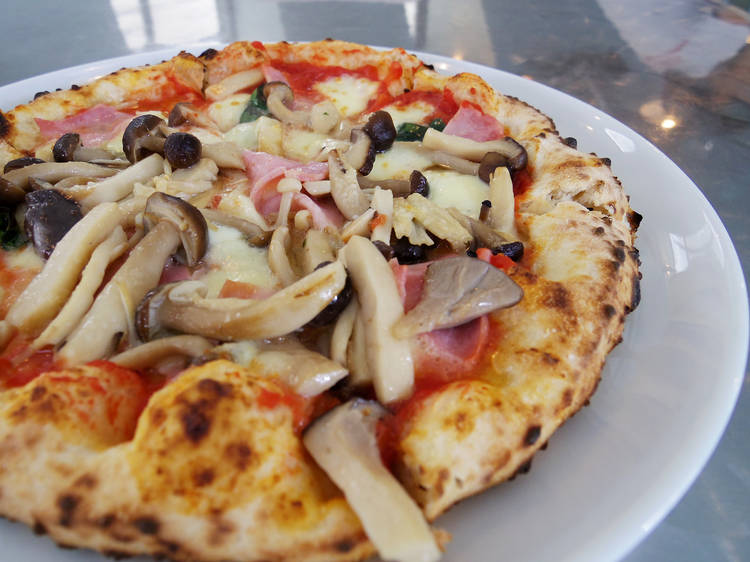 Devour some ‘military-style’ pie at Pizzaman

Housed in a vine-covered, barrack-like concrete tube decorated with aluminium furniture, toy soldiers and shiny air vents, Pizzaman serves tasty Italian grub in austere surroundings. The simplest options – think margheritas and marinaras – among their signature pizzas are probably the best of the bunch, but big eaters might still want to consider the heavily topped specials. This sure isn’t the place if you’re trying to impress a date, but the quality of the food can’t be faulted. First-timers will want to head over at lunchtime, when the pizzas come with a salad and choice of drink. Thanks to welt66 for the suggestion!
Read more 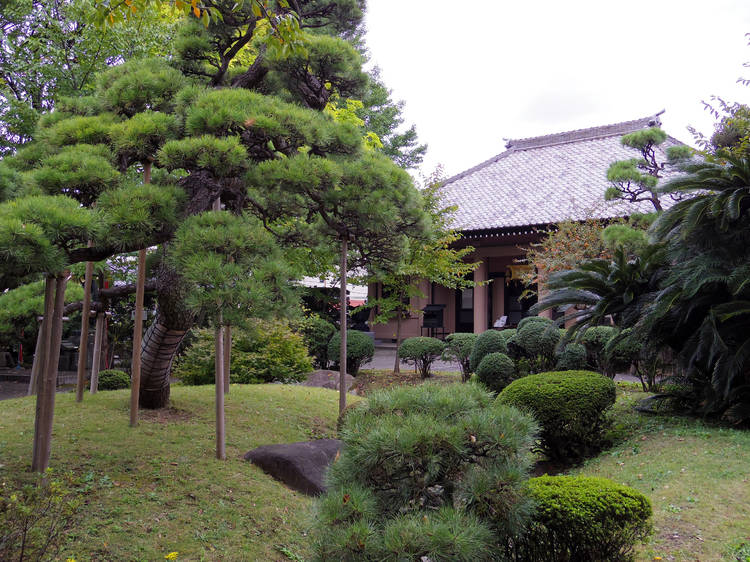 Discover a lush hideout at Raifukuji

Hidden in the middle of a quiet residential area just off the Daiichi-Keihin highway, this Shingon temple is an eerily quiet oasis found at the end of a beautiful stone path. The temple’s origins reach back into the 10th century, but the current, rather modern buildings are all built in the postwar era. In addition to the small but lush garden inside the gates, the highlight here is the monument to the indigo dealers of Awa Province, who plied their trade in Edo from the early 17th century to the Meiji Restoration.
Read more
Advertising 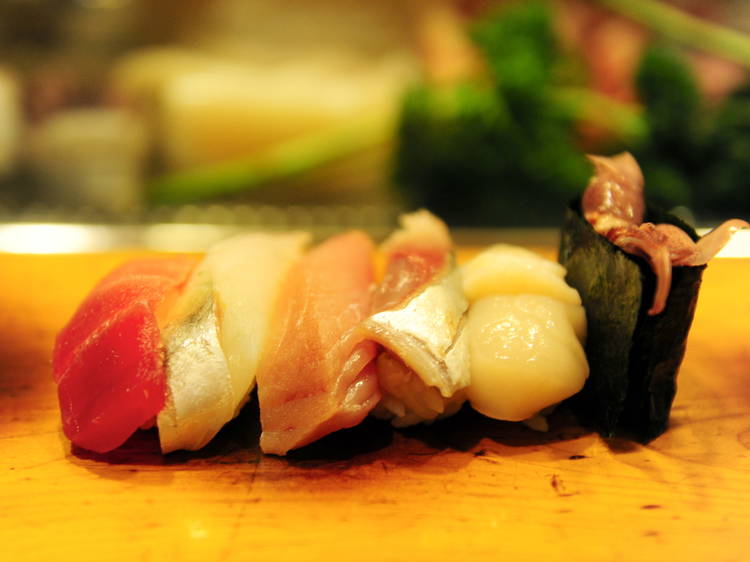 Fill up on bargain sushi at Isamizushi

Cheap sushi is rarely worth any respect, but this miniature eatery pulls off the difficult feat with aplomb. Nothing here costs more than ¥200, with squid nigiri going for ¥60 and decent maguro on offer for a mere ¥100, but the quality is far superior to that found at conveyor-belt chains. Although turnover is quick and the rice amounts are paltry, one does wonder how Isamizushi is able to make anything resembling a profit. Still, this is no hobby shop – the master is a full-fledged craftsman with decades of experience. Thanks to Y-Shin for the suggestion!
Read more 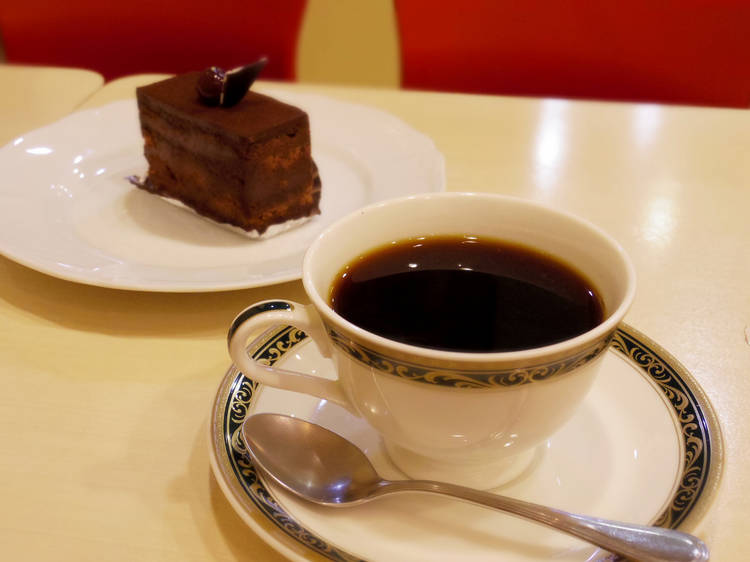 Sip on novelty coffee at Awaya

This old-school coffee shop turned things around drastically a few years back and now carries only one kind of beans: the Toarco variety from Indonesia’s Toraja, a renowned growing region where production ground to a halt due to World War II before being revived by Japan’s Key Coffee in the ’70s. Awaya’s mouth-watering cake gallery is also well worth exploring, but we can’t say that the shop’s renewal has been a complete success: the interior is now about as charming as that of a Doutor. On sunny days, consider take-out.
Read more
Advertising 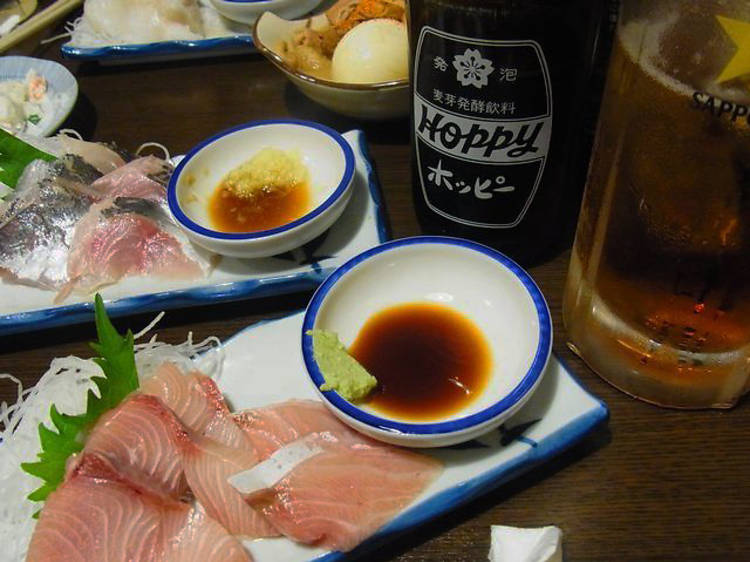 Get buzzed on the cheap at Vampire

If you’re on an afternoon stroll through the narrow alleys right by the station, this classic standing-only watering hole will most likely be the only place that’s open. Hours amenable to daytime drinking aren’t the only reason for Vampire’s popularity, though: the attraction here is, above all, the almost ridiculously low prices. The quality seafood, which comes in every shape and form you’ll care to try, goes nicely with people’s booze like Hoppy, oolong tea highballs and shochu. Just don’t be boring and order a beer – at ¥410, it’s the most expensive thing on the entire menu. Thanks to @dohdohdohh for the suggestion!
Read more 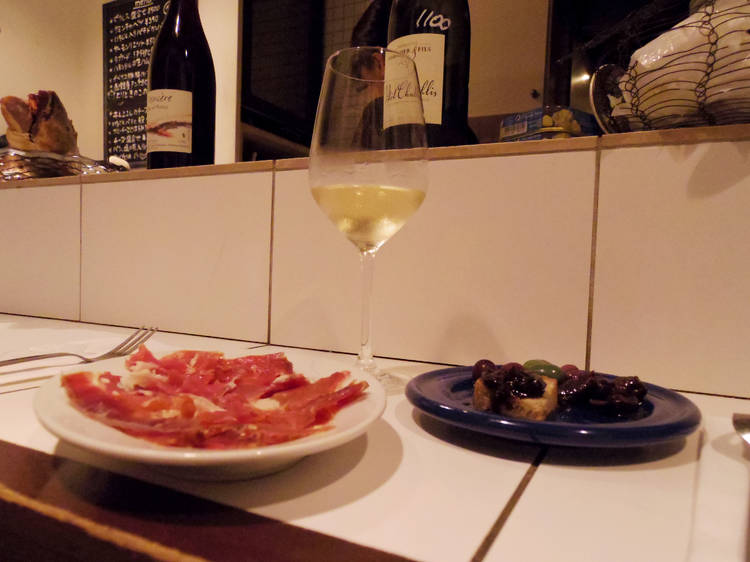 Enter a tiny world of wines at 8 Huit

The Higashi-Koji yokocho by the station is riddled with dirt-cheap izakayas and other more or less unseemly boozers, but this stylish wine bar sure makes for a nice exception. The lovely ladies behind the counter serve up a fine selection of mainly European wines, with a focus on organic and natural varieties, plus some tasty appetisers – don’t miss their delicious olive jam. Prices are a little steep and space is at a premium (the bar seats six customers), but anyone looking for a classy sipping experience won’t be disappointed. Thanks to @shitamachi66 for the suggestion!
Read more
Advertising 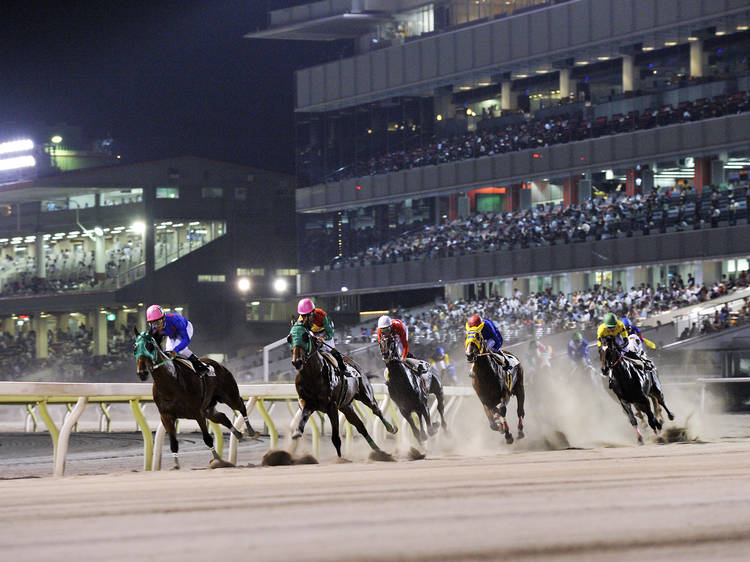 It may be best known for the flea market held at the parking lot almost every weekend, but Oi Racecourse, also known as Tokyo City Keiba, is actually a far more interesting place on race days. Even if you’re not into betting, the atmosphere at the night-time Twinkle Races is worth experiencing: elderly regulars, young couples and tourists mingle in the stands, the gyu-nikomi (stewed beef) is tasty and the views from the top of the grandstand are impressive. Finally, you can’t go wrong with a ¥100 entrance fee.
Read more 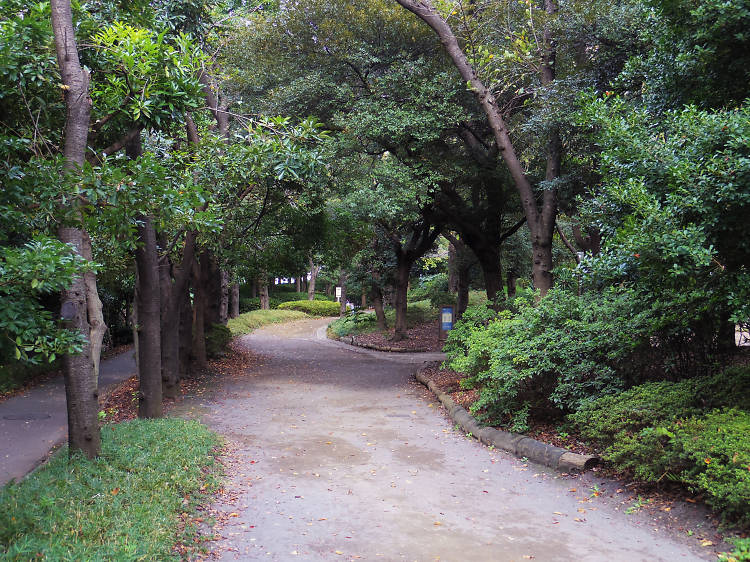 Even if you’re not visiting Shinagawa Aquarium, this spacious, rectangle-shaped park offers things to do for an entire day. Borrow a bike for an hour and speed around the area, play some tennis or baseball, complete the fun ‘fitness circuit’, or stare at the birds going about their business in the southern pond. The outdoor pool is open during the summer, while the plum tree grove shows its best sides in February and March. Some of the facilities look like they’re in need of a little renovation here and there, but don’t let that get in the way of your workout.
Read more
Advertising 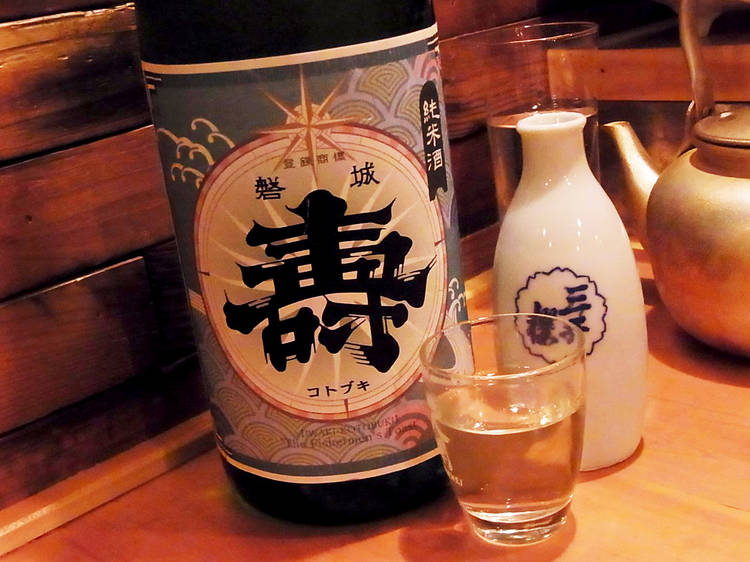 A laidback, nihonshu-fueled evening complete with great food is the recipe at Noboru, a spacious and welcoming pub found on a quiet corner just a few minutes’ walk from the station’s bustle. Quality sake, including Ehime’s Kagiya and Yamagata favourite Toyo Bijin, is naturally the main draw for most patrons, while beer enthusiasts will have fun with the Harvestmoon brews. As for the cuisine, make sure to sample the homemade pickles before digging into the ample sashimi options. For a sit-down dinner in Oimachi, Noboru ticks all the boxes. Thanks to @shitamachi66 for the suggestion!
Read more 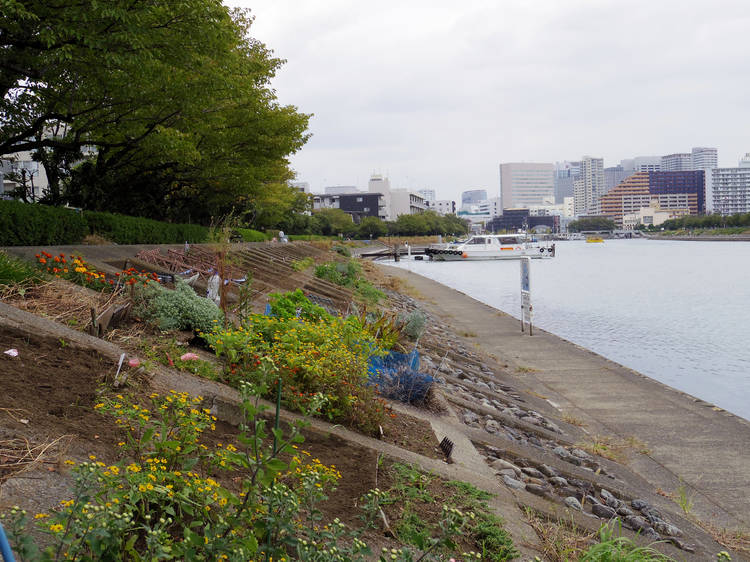 Stroll along the Hana-Kaido waterfront

A rare sight on the concrete-dominated Tokyo coastline, this breakwater levee turned miniature flower farm along the Katsushima Canal is a nice spot for sitting down and gazing at the fishing boats making their way out to sea. When you’re done with the quay, head inland to find the old Tokaido road, now a decidedly unspectacular thoroughfare lined with small shops and eateries, plus a few noteworthy sights: make sure to visit Hamakawa Bridge, better known as Namidabashi (‘bridge of tears’), the place where convicts about to die at the Suzugamori execution grounds bid final farewells to their families.
Read more
Show more
Recommended