The 11 best cafés in Vienna

When in the Austrian capital, you’ve got to drop by a Kaffeehaus. Enjoy the best cafés in Vienna, where coffee is king

Have you even been in a cafe until you’ve been in one in Vienna? The Austrian capital is where Europe’s obsession with coffee began; legend has it a sack of beans was left behind by the Ottomans after the failed attempt on the city in 1683, and one forward-thinking local set to work. Whether that is true or not remains up in the air, but it doesn’t matter; the best cafes in Vienna are all we need.

In many ways, the traditional Kaffeehaus is to the Viennese what the pub is to the Brits. It is a social institution that transcends eating and drinking, to the point where ‘coffee house culture’ has been recognised by UNESCO as an integral part of the city’s cultural heritage. Undoubtedly among the city’s best attractions, visiting a traditional cafe in Vienna is one of the most important things to do when visiting this magical place.

RECOMMENDED: Full guide to the best restaurants in Vienna 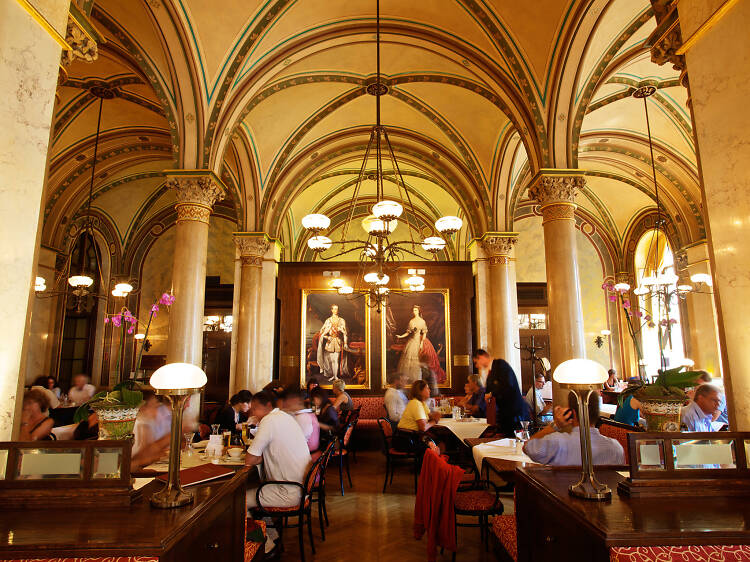 The sheer grandeur of Café Central makes it well worth queuing for. Established in 1876, this quintessential Kaffeehaus was a popular hangout among intellectuals in turn-of-the-century Vienna. Sigmund Freud, Leon Trotsky and architect Adolf Loos are all known to have taken coffee here. Order a Melange, a Viennese take on a cappuccino, choose a cake from the stand and while the afternoon away under the pseudo-Gothic vaulted ceilings of the Palais Ferstel. 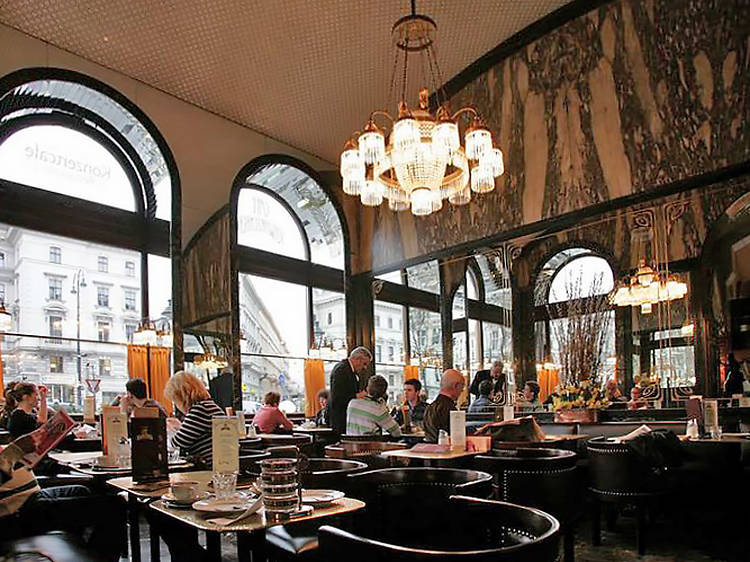 Said to be the oldest café on the Ringstrasse and with a marble and wood-panelled interior, the Café Schwarzenberg is one of the city’s most opulent coffee houses. It was severely damaged by the Soviets during the post-war occupation and it was only in 1979 that it was finally renovated. There’s a wide range of rather curious (and very boozy) Viennese coffees available, but the real highlight is the hot chocolate ‘Alt Wiener Art’, served with cinnamon, vanilla and whipped cream. 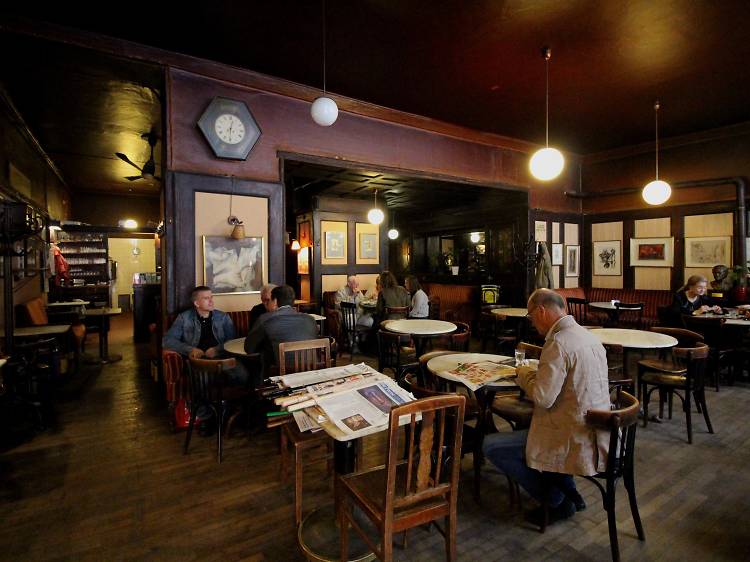 This Kaffeehaus just off the main pedestrianised shopping drag, the Graben, is a considerably less formal affair than some of its rivals. With slightly threadbare upholstery and well-worn tables and chairs, the Café Hawelka is more akin to a living room than an upmarket Kaffeehaus. During its ’60s and ’70s heyday, the stars of the Vienna art scene regularly met here and celebs such as Andy Warhol dropped by. 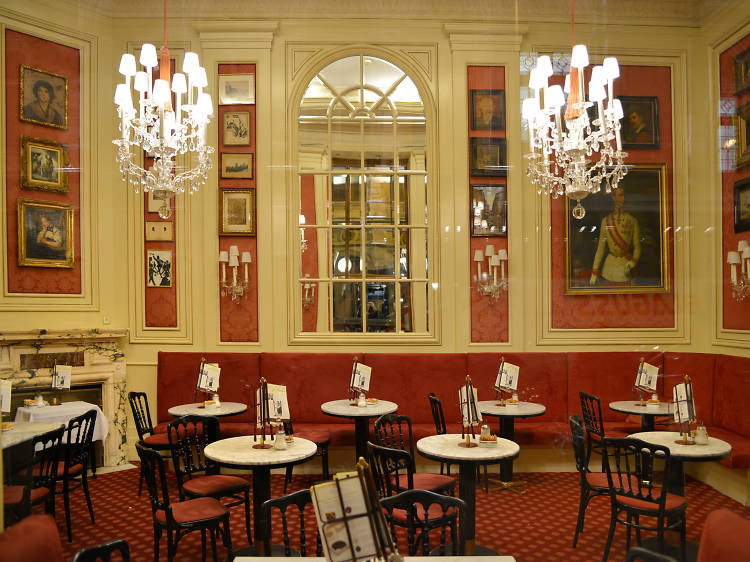 This café in the historic Hotel Sacher is THE place to sample a slice of Vienna’s most famous cake, the Sachertorte. Legend had it this dark chocolate and apricot confection, usually enjoyed with unsweetened whipped cream, was created here for Prince Metternich. The exact recipe remains a secret (they’ve even gone to court with Demel over it) but eating a slice of this very rich cake in the imperial surrounds of the Café Sacher will make anyone feel like royalty. 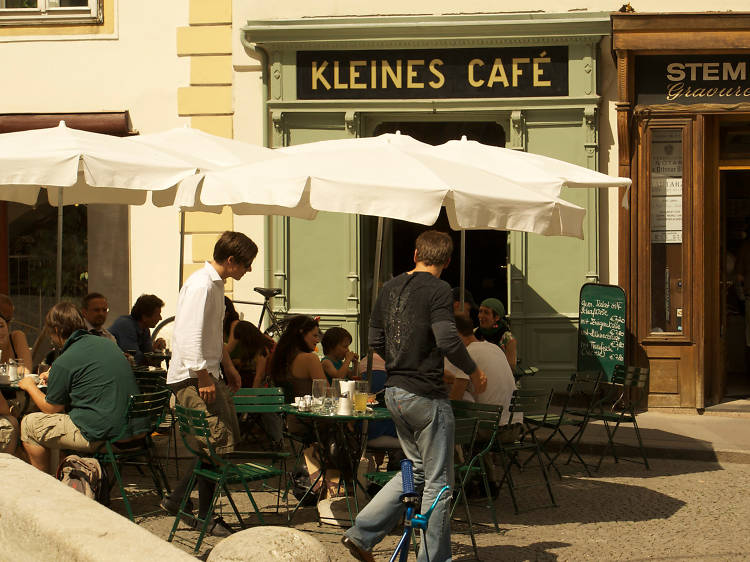 The appropriately named Kleines Café – ‘small café’ – may be tiny inside but the warmer months see its clientele spill out onto tables on the pretty Franziskanerplatz. Featured in the film ‘Before Sunrise’, this late-opening bar has long attracted a range of arty types and serves simple dishes and decent coffee alongside wine and beer on tap. 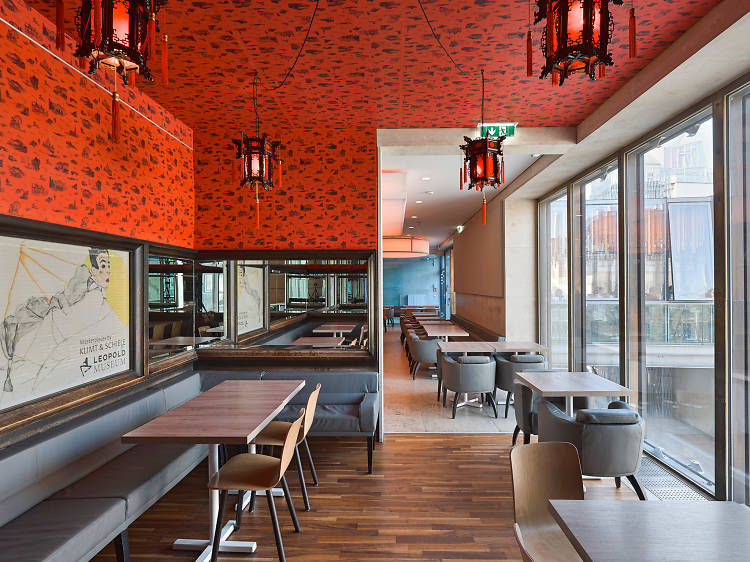 This buzzing address in the MuseumsQuartier cultural complex describes itself as a café, restaurant and bar hybrid. Perhaps surprisingly, the menu has an Asian focus (its dim sum are divine) but there are some Viennese specialities and pasta dishes for the less adventurous. During the summer months, it opens a popular terrace in the complex’s main courtyard and there are DJs at weekends. 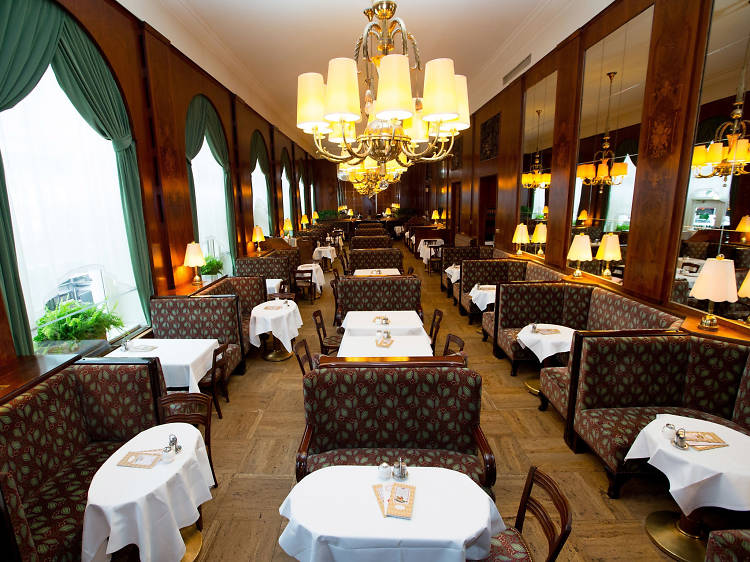 Another of Freud’s favourites, Café Landtmann predated the existence of the Ringstrasse on which it now sits. Dating back to 1873, this traditional Kaffeehaus has long been popular with politicians, academics and theatre-goers alike. It’s also one of the city’s poshest; the waiters are impeccably attired and upon arrival, you must surrender your jacket to the cloakroom. Spacious inside, Landtmann also boasts a pleasant terrace overlooking the Burgtheater in summer. 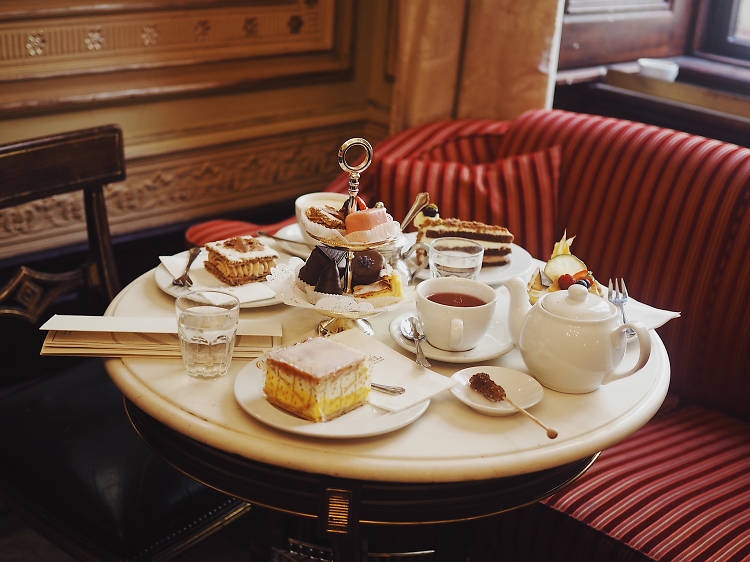 Located on one of Vienna’s most prestigious shopping strips, the Kohlmarkt, former imperial supplier Demel is a confectioner’s dream. There are so many sweet treats displayed in the Habsburg-esque vitrines that even a quick visit to the shop can make your teeth ache. Every type of Viennese cake and pastry you can imagine is on the menu, alongside savoury specialities such as sausages with mustard or schnitzel. It’s even worth just walking past to admire the sugary artworks on display. 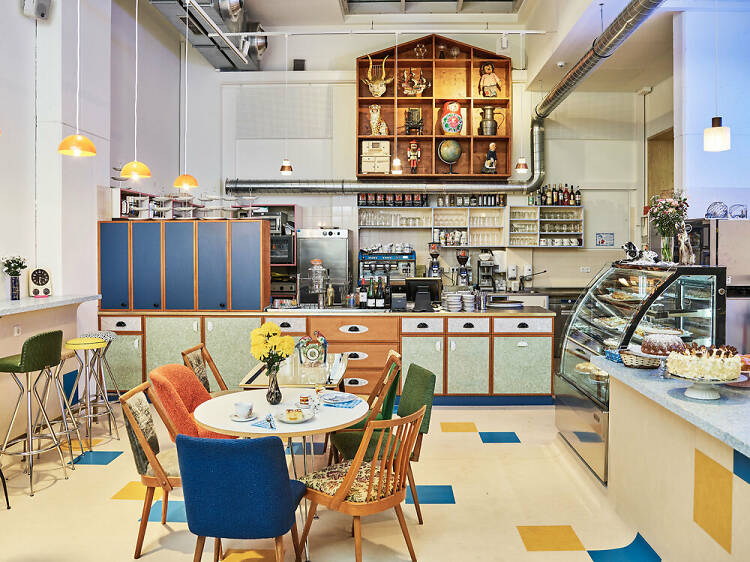 Meaning ‘full pension’, Vollpension is a rather novel café where all the cakes are baked to tried-and-tested family recipes by the grannies and grandpas in the kitchen. This quirky modern-day café aims to bring people from all generations together and make them feel at home. Breakfast and light bites are also available, alongside whatever cake is freshly baked that day. If you’re looking for something a little stronger, try the eggnog from the ‘Grandma’s drink cabinet classics’ section of the menu. 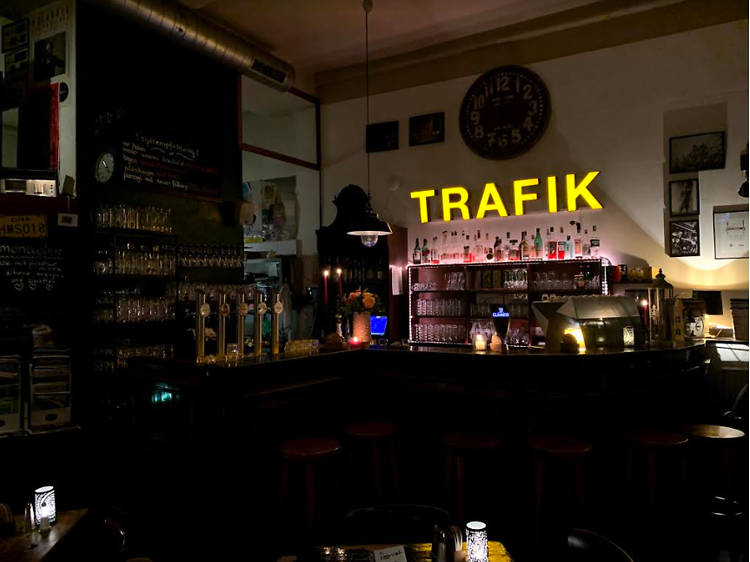 Describing itself as a ‘culture café’, Tachles is in one of Vienna’s coolest up-and-coming districts. You can relax with a coffee – or a beer – on the terrace overlooking the Karmeliterkirche during summer, while the film-themed interior offers a cosy respite from the cold in winter. Tachles also hosts events including readings, cabaret and open mic nights in its basement. 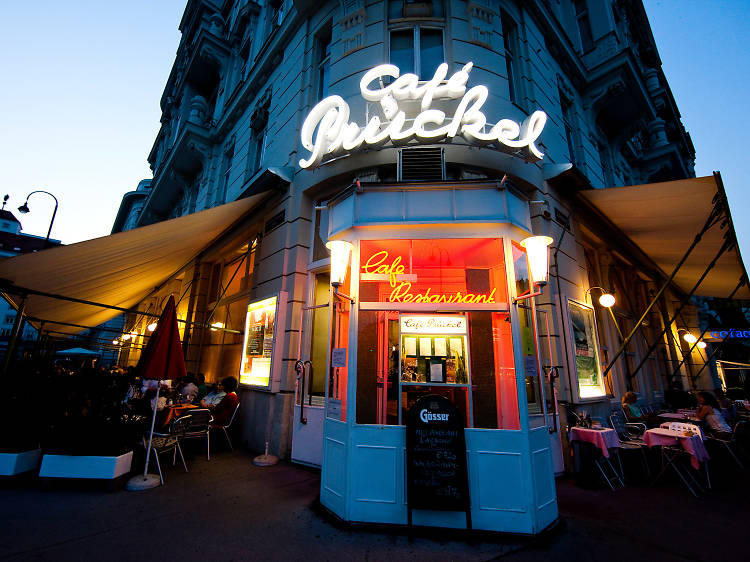 The delightfully retro Café Prückel has remained faithful to its ’50s restyling by Oswald Haerdtl despite recent renovations. You’ll find all the Kaffeehaus classics on the menu, from traditional Viennese coffee to pastries to Wiener schnitzel, which you can scoff while listening to live piano music every Monday, Wednesday and Friday evening. The clientele tends to be pretty mixed, although the Prückel made headlines for all the wrong reasons back in 2015 when a lesbian couple were thrown out for kissing in public. 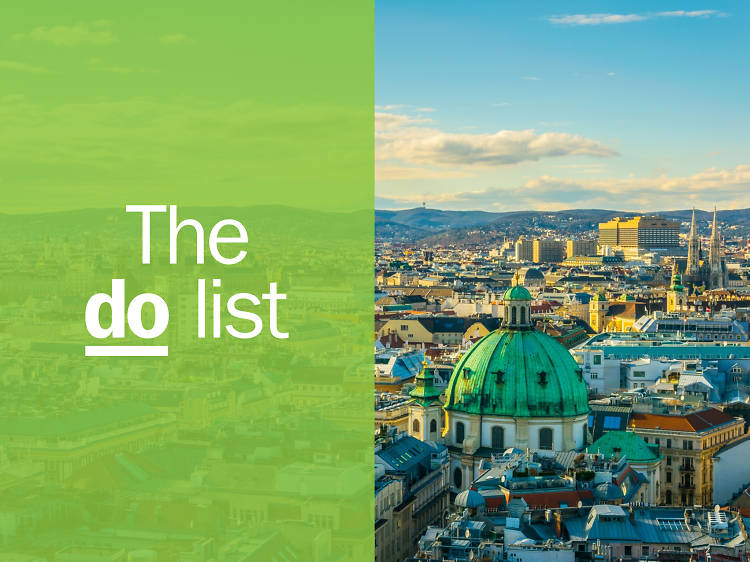 The 15 best things to do in Vienna

Vienna has topped every quality of life survey going in recent years and it doesn’t take long to work out why. With clean air, a low crime rate and cheap, reliable public transport, tourists can benefit from a trip here as much as the locals.