Bounded to the west by the Capitol building and South and North Capitol Streets, to the south by the Southeast Freeway, to the north by H Street, NE, and to the east by 11th Street, this genteel neighborhood overlays two DC quadrants-Southeast and Northeast, more of it falling into the former.

Businesses along Pennsylvania Avenue, SE, include bars and restaurants luring a youthful, politics-obsessed crowd. There are still vintage hangouts like the fabled Tune Inn, little changed since VJ Day. Aside from Pennsylvania Avenue itself, the Hill's principal shopping streets are the 7th to 8th Street dogleg from Eastern Market, featuring food stores, galleries and craft shops, supplemented by the market's weekend flea and craft marts.

Restaurants and bars on Capitol Hill 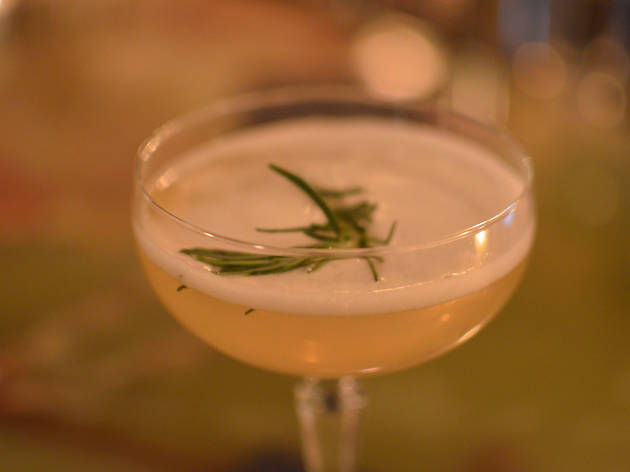 You don’t need to read our review to know Rose’s Luxury is the District’s hottest restaurant; a little source named the James Beard Foundation already told you. What we can tell you is that, yes, local chef Aaron Silverman’s two-story Barrack’s Row joint is worth every little bit of the buzz it’s getting. Rose’s doesn’t take reservations and a line forms at 4pm on weekends for a 5:30 seating; but don’t let this be too offputting. Because dining here really is, as the neon sign hung downstairs near the kitchen says, “awesome.” The place oozes hipness and the camaraderie on the floor is palpable. Rose’s menu is Southern meets Jewish meets Japanese meets French meets Thai meets your grandmother’s home cooking, and changes often. If you manage to get inside, immediately order the cocktail made with apple cider and brisket fat-washed moonshine (yes, you read that correctly), which is made right there in the basement (where else?). The drink is an instant soul-soother. Next, wrap your hands around a bowl of Silverman’s pork and lychee salad. The sheer number of textures—a cloud of whipped coconut cream, crunchy peanuts, velvety lychee fruit, crispy pork—will taunt your every last tastebud. The Southern-style fried chicken drizzled with honey and doused with sesame seeds is crisp, moist, delicious, and our new best friend. If you’re with a large group, don’t miss the family-style smoked brisket dinner. Just one forkful of this warm, tender dish—served with a cheeky wink on a litera 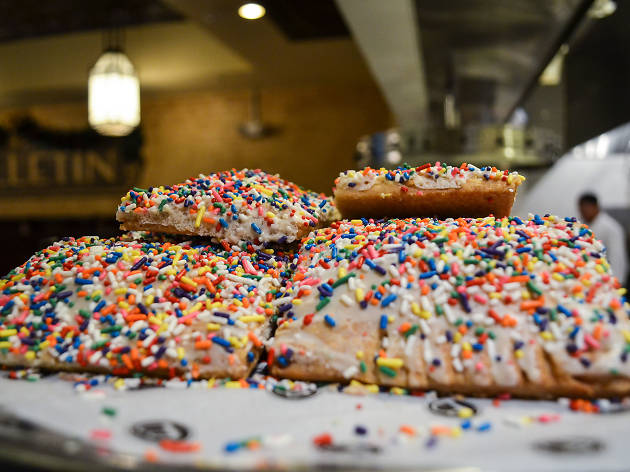 The only problem with Capitol Hill’s go-to comfort food spot is that you’ll have to get your hung-over ass outta bed early to beat the Barrack’s Row brunch crowd. But of course the place is crowded: At Ted’s you’ll find breakfast served all day and plates that will make you feel like a kid again without any judgment about overindulgence from your ma. Slip into one of the cozy leather booths, zone out to whatever old school movie the projection screen is playing, and order up a Mark on an Off Day—two eggs, a choice of bacon or sausage, toast, and pile of hash browns that will change your life. Ted’s grilled cheese and tomato soup is always a staple, and Nana’s beer biscuits and sausage gravy will have you saying, “Diet? What diet?” Speaking of dieting, there are house-made poptarts that are a must (the peanut-butter-bacon is a favorite). If you haven’t slipped into a calorie coma by the end of your meal, note that Ted’s serves up a long list of old-fashioned milkshakes with a grown-up twist: booze! Shakes are prepared in a steel can and served in a tall glass with toppings and a straw. The grasshopper (Kahlua and crème de menthe) or the Nutty Professor (hazelnut liqueur) can turn any day around. Stretchy pants are recommended, but not required. 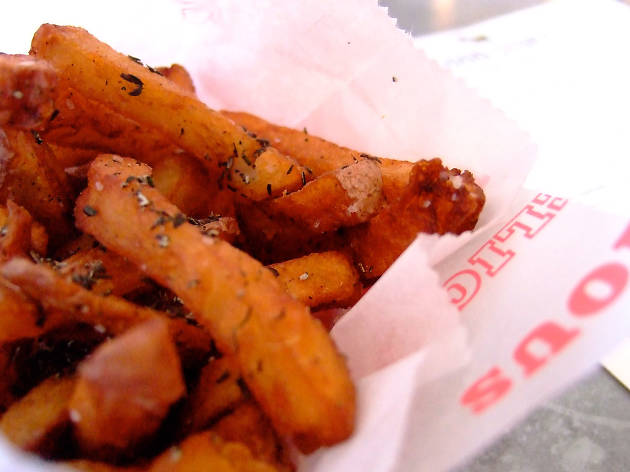 DC claims several stars from the popular Top Chef tv cooking competition, and one of the most recognizable is Spike Mendelsohn. His fun, laid-back burger joint on Capitol Hill (right next to his We, The Pizza restaurant) is a favorite of Hill staffers and First Lady Michelle Obama. The Michelle Melt, a free-range turkey burger with Swiss cheese and a wholewheat bun, is named after her. Grab your order at the counter and don’t miss the dipping bar where you can doctor up your handcut fries with flavored mayonnaises and sauces. The delicious toasted marshmallow milkshake is the stuff of legend.

Things to do on Capitol Hill 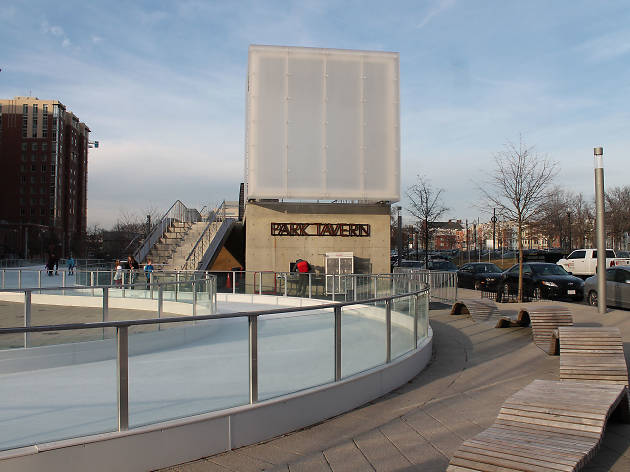 This outdoor set-up in Southeast DC has style to spare. Long and lean, the figure-eight track in Canal Park sports two skating “paths,” a nice change from the usual rink roundabout. The four-month season is packed with special events like two-for-one admission on Tuesdays between 4 and 6 pm; “Rock n Skate” on Friday nights as well as the occasional “Icercise” class (an aerobic workout on two blades). Afterward, cozy up at Park Tavern and watch skaters whiz by the windows. 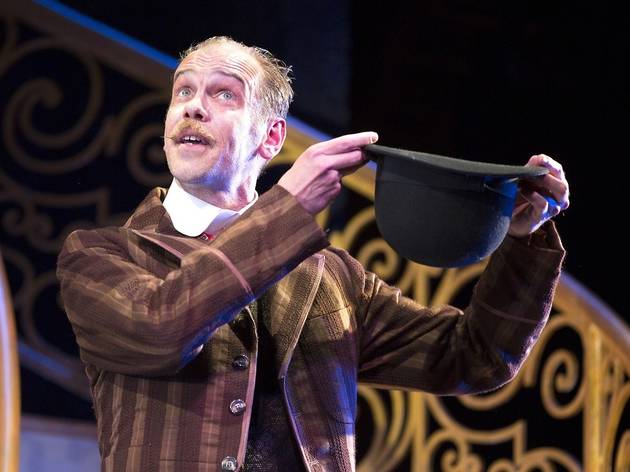 The Folger’s regular directors (including British actor Richard Clifford) produce solid, intelligent Bard-oriented fare. It was here that Lynn Redgrave developed what became the Broadway hit Shakespeare For My Father, and here that mischievous DC Shakespearean Joe Banno dramatized Hamlet’s internal debates by splitting the title role into four parts—and casting women in three of them. An Edwardian-costumed Twelth Night, directed by Robert Richmond, was running at the time of writing.

Music and nightlife on Capitol Hill 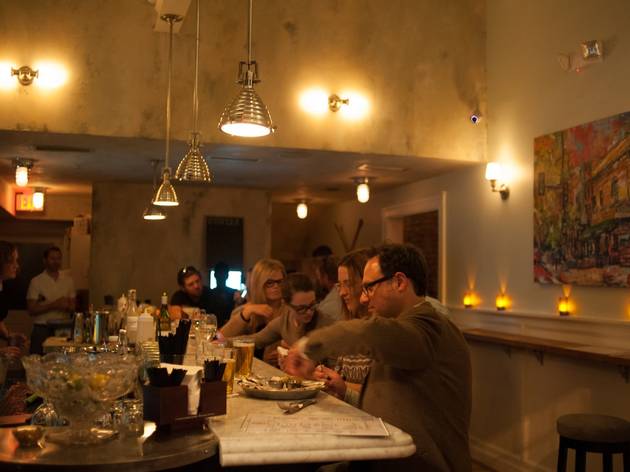 A recent addition to the neighborhood, this stylish, all-white Capitol Hill outpost of the Dupont Circle and Alexandria seafood chain boasts ownership of the Eddy Bar, a long stretch of marble offering house-made sodas in flavors such as "citrus sage" and punny cocktails (the Oh Rickey You’re So Fine features bourbon, Gewürtzraminer, and lemongrass). The beer menu is esoteric, consisting mostly of brews you’ve never heard of, from the 21st Amendment Dub Step IPA on draft to the local Port City Tartan. Come for happy hour (Monday to Friday, 5–7pm), stay for the cocktails and bowls of Goldfish crackers. 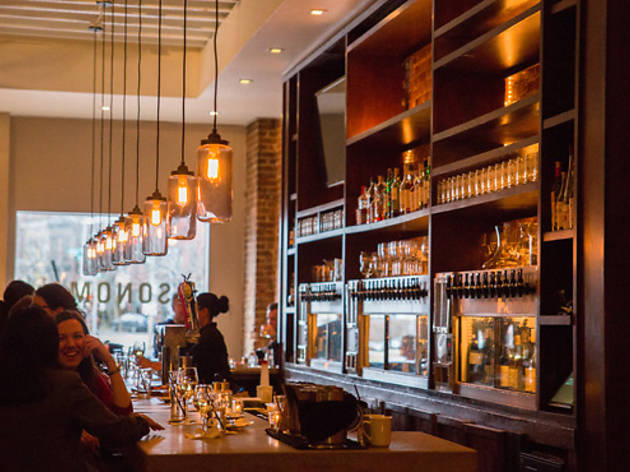 Sonoma offers a welcome grown-up respite from all the other dives and sports bars stretching down Pennsylvania Avenue. The long granite bar, exposed brick and extensive wine list make for a stylish, urban feel, and the upstairs lounge has plenty of comfortable alcoves to settle in to (although it’s often closed for political functions and events). Sonoma’s proximity to the House office buildings also allows for great eavesdropping while you’re savoring that Russian River Valley pinot gris—as long as you’re not put off by the ping of a thousand BlackBerrys. 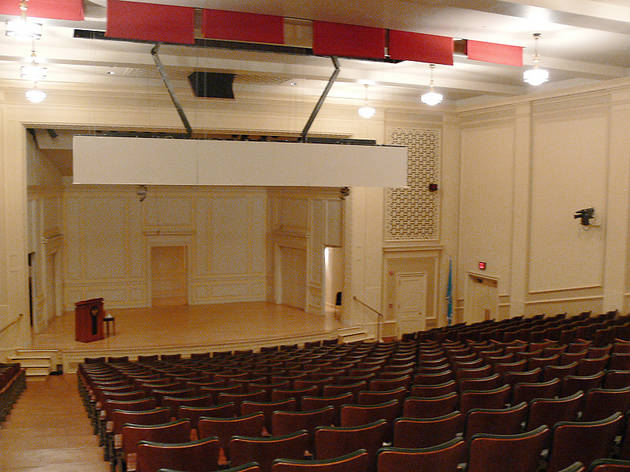 The problem with some Washington venues is that standards of architecture and acoustics don’t always match—with monumental structures yielding muffled sound. But this auditorium in the Jefferson Building rises to the occasion on both counts. Programming is intriguing and intimate, running from classical to country to world music, with recent bookings ranging from the Moscow Sretensky Monastery Choir to folksters Noel Stookey, Ramblin’ Jack Elliott and Jimmy LaFave, performing for the Woodie Guthrie centennial celebration. 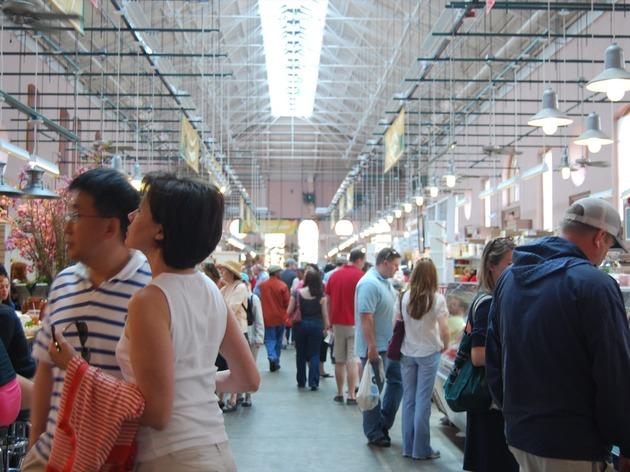 Originally built in 1873, this market became the "town center" of the Capitol Hill neighborhood and continues to be one of the liveliest spots in DC. The South Hall market, open throughout the week, hosts indoor merchants selling meats, baked goods, cheeses and flowers. On weekends the area around the market building hosts arts and crafts vendors and furniture sellers, flea-market style, along with farmers’ stands and food vendors. 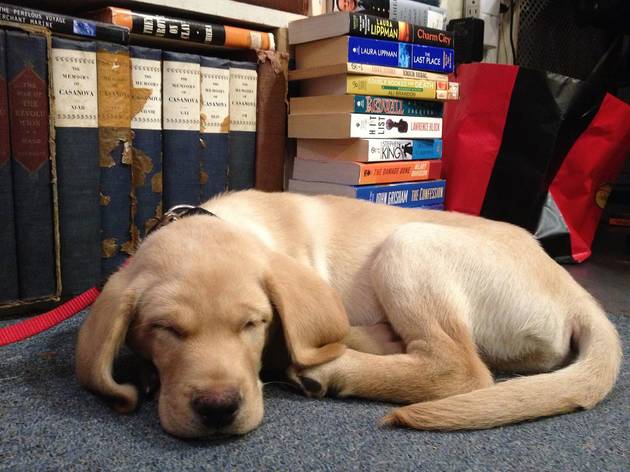 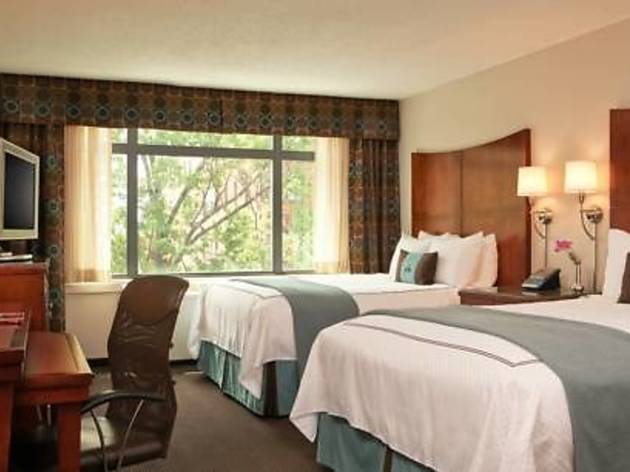 Only a few blocks from the United States Capitol, and nestled in the historical neighbourhood of Capitol Hill, this hotel offers spacious all-suite accommodations along with a free continental breakfast.The Capitol Hill Suites are only minutes from some of Washington's most popular sites, including the National Aquarium, the Capitol Building and the National Mall. Capitol South Metro Station is a 5-minute walk from the hotel and offers easy access to many other attractions.Guest accommodations at the Capitol Hill Suites are furnished with a number of modern conveniences, including fully equipped kitchenettes. An evening wine reception is offered Monday through Friday in the lounge. Guests can also enjoy the on-site fitness facilities and modern business centre. The property features two separate buildings. 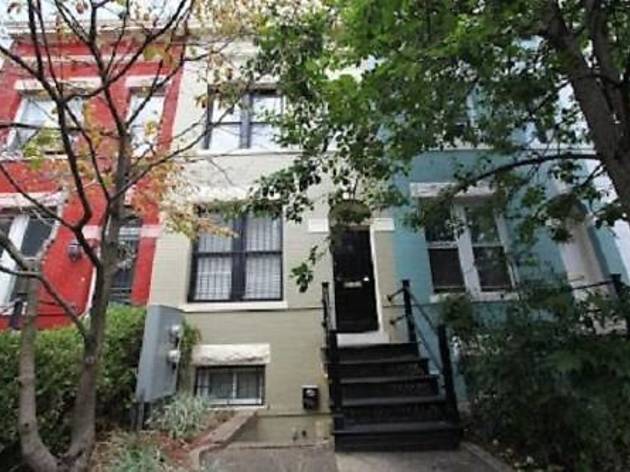 Apartaments Capitol Hill 3000 is a self-catering accommodation located in Washington, D.C. The apartments are equipped with a full kitchen and are located 2 miles from the U.S. Capitol and National Mall.The apartments have a living room with flat-screen cable TV and a dining area. They are decorated with modern furnishings and have an in-unit clothes washer and dryer.Smithsonian museums are 2 miles away from the Capitol Hill apartments. The White House is 3 miles away. 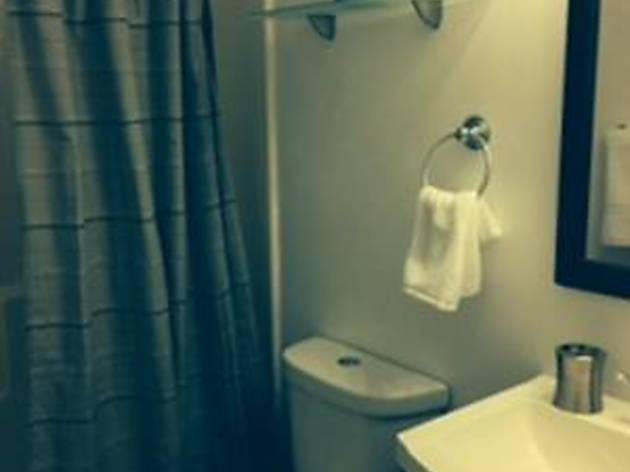 This is a beautiful large two-level apartment which includes one bedroom with a queen size bed and a desk, one bathroom , hardwood floors, washer and dryer in the unit, offers lots of light, a city view, and a fully equipped modern kitchen with stainless steel appliances and granite countertops. The living room has a flat screen HDTV, a working fireplace and a bay window.

Read more
Check prices
Get us in your inbox