What's the deal with Kypseli?

When you walk through the streets of Kypseli the first thing you’ll notice is the remarkable mix of architectural styles, from crumbling neoclassical mansions to striking Bauhaus designs with rounded balconies and graphic front doors. And pretty soon you’ll notice that the neighbourhood’s residents match this eclecticism, too. A mixture of African and Middle Eastern migrant communities have settled in Kypseli over the past two decades, transforming one of Athens’s oldest neighbourhoods into its only truly multicultural one.

More recently, the city’s artist community have also begun making it their home, attracted by its low rents and proximity to the centre. The city’s first ever artist residency, Snehta, was founded here, and the rotating mixture of international artists put on regular exhibitions in its space at I Drossopoulou 47. The surrounding streets are a mixture of old world Greek life and modern multiculturalism. Old men sit playing dominoes outside traditional ouzeries, and Ethiopian restaurants, Kurdish kebab houses and shisha bars can all be found nearby.

Do not miss a Sunday stroll down Fokionos Negri Boulevard. The cafes and tavernas that line either side give a view of both new and old Greece, and every Sunday the 1930s-built municipal market opens for pop-up shops, events and an organic food market.

British printmaker Eleanor Lines fell in love with Kypseli after completing the Snehta residency in 2016, and her work is inspired by the architectural shapes of the neighbourhood. Today she runs Kypseli Print Studio, housed in a split-level mid-war building off Fokionoa Negri, where she hosts regular printing workshops, residencies and one-off event.

With its smoky dancefloor, ’80s décor and post-punk playlist, Rebound nightclub is an Athens institution. Barely changed in decades, the ambiance and music have a definite hint of gothic but the crowd is distinctly more eclectic. It only opens on Saturdays after midday, so make sure your energy levels are up.

The tiny Asia Minor is a local institution thanks to its delicious Kurdish-style spicy kebabs and meze. The tabbouleh salad and hummus are particularly popular. Booking is strongly advised on weekends.

Ethiopian restaurant Lalibela is famous for its buffet events which take place on the first Saturday of every month. The restaurant features unlimited dishes for just €12 a head and are accompanied by traditional music and dancing.

For a more upmarket take on traditional Greek cuisine check out The Bakalogatos. The small plates menu is focused on regional produce and you’ll find speciality cheeses and meats from all over the country. The fried courgette is also said to be the best in Athens.

The tiny mid-century-style Au Revoir bar is thought to be the oldest continually-operating bar in Athens, and rumour has it that Frank Sinatra used to drink here in the 1950s. Today Kypseli’s art crowd gather to sip negronis every night of the week.

Hip hangout Village is a cool café during the day which transforms to a buzzy bar as the sun dips. Grab one of the tables outside and participate in the great Greek sport of people watching, as the city’s mix of residents pass through the platia.

For an old-world style Kafeneio, head to Violeta on Platia Kypselis. This traditional café features a fabulous collection of knick-knacks from the previous century, plus cheap drinks and hearty snacks. Its beloved by local old men during the day but at night a younger crowd gathers to take advantage of the drinks prices and spacious outdoor seating.

How to get to Kypseli

The so-called anarchist neighbourhood of Exarchia, famed for its street art, sits just to the south. The two areas are separated by Pedion Areos, one of central Athens’s few parks, which is worth a daytime wander.

Discover more things to do in Athens 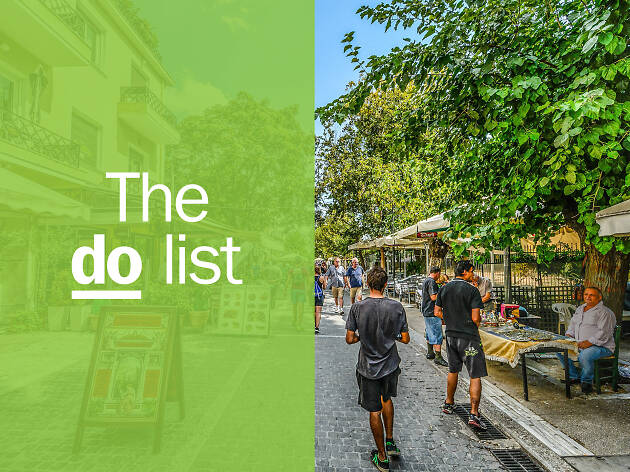 Athens is the cosmopolitan heart of Greece. Here’s how to get the best out of it.