Tuesday 30 September 2014
FacebookTwitterPinterestEmailWhatsApp
Advertising
It’s a pleasure to meet up with friends at midday for tapas and conversation, a glass of vermouth in hand. And now it’s easy to do with an ever-growing number of bars and taverns that want to make this tradition the best part of the day. Hippocrates is said to be the inventor of vermouth, back in the year 460 BC, one of the best periods for alcoholic beverages in human history. This wise man managed to concoct his brew by crushing various flowers – including wormwood, the same plant used in making absinthe – in wine. Later, in the Middle Ages, one of the worst periods for everything, it was called herbal wine. Then, in the 18th century, Piedmontese masters perfected the methodology and recipe, approximating the drink consumed today. It turned out that one of those clever Italians ended up on Catalan soil. His name was Flaminio Mezzalama and he brought with him the vermouth made by Martini & Rossi. The success was such that a few years later there were already illegal shops appearing in the city where they sold forged bottles of the brand.

The first half of the previous century was the era of splendour for vermouth, and the gastronomc ritual developed to go with it, which gave a local character to a beverage that was soon being produced in places like El Maresme and Reus. But by the end of the ’80s, when the city was fully given over to the creed of ‘modernity or death’, vermouth and the wine bars devoted to its consumption became a nostalgic refuge for apostates in the religion of progress. But with the arrival of the ’90s, the old was suddenly called ‘vintage’, and everyone succumbed to the wonders of recycling and attitudes of ironic nostalgia.

Now in the new century, Barcelona is showing increasing symptoms of fatigue with its image as a designed, modern and strenuously cosmopolitan place. And with that we arrive at the first decade of the 21st century, when modernity is suffering some of its worst press. So, it’s not surprising that wine bars and the vermouth they serve are once again an essential part of leisurely dining, especially for part of a new generation that grew up with the overly designed and, as a result, has come to appreciate the more authentic. Now it’s not only the elders who are keeping the spirit of the vermouth tradition alive; the young have also been known to partake of the old ways with a care rarely seen before. Wine bars in danger of closing have returned as meeting points for a clientele showing their identity cards for the first time. Dotted all around the city are smaller cellars with the spirit of the European coffeehouse, traditional cuisine and vermouth on tap, spaces that host the vermouth-concert, live alternative rock accompanied by canned muscles.... It’s the perfect storm. The ritual is clearly as much a part of the appeal as the drink itself. Few cultural recycling exercises have been as successful as that of vermouth in Barcelona. Here’s a guide to where to get yours. 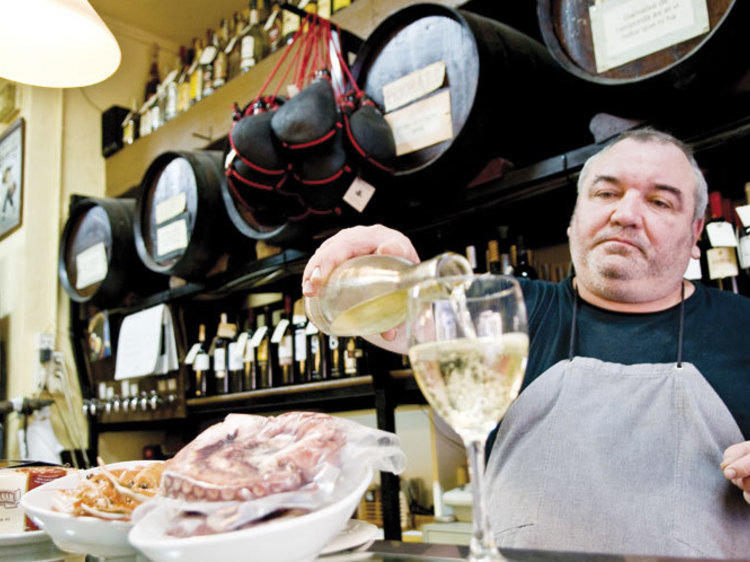 You don’t have to go down to Barceloneta for good fish tapas. On the corner of Sants market, the tiny bar Bodegueta de Cal Pep offers a range of marine snacks that you just can’t refuse: sea snails, crab, razor clams, goose barnacles, dried tuna and other delicacies such as peperini (peppers stuffed with anchovies or cheese) and Torta del Casar soft cheese. Àngel has kept the spirit of this place, which opened 20 years ago, alive while adapting it to modern times. For gourmets of the aperitif. 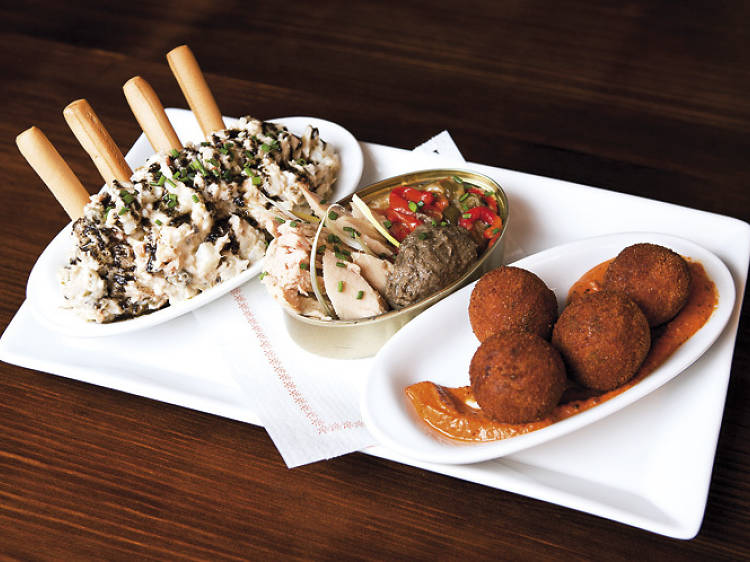 You won’t find anyone called Pepita behind the counter or at the bar. But you will find Sofia and Andreu, the owners of this place with unusually long operating hours. Eat when you want: breakfast, lunch (special menus available at €8-€12), snacks and dinner, where the star turns are the 'pepitas', inspired by the famous pepito pork cuts, from the classic loin to some surprising creations. La Pepita is also a bar with a predilection for gin and tonics (they’ll make you a half-measure for €4) and their house vermouth, made up of gin, orange and soda. 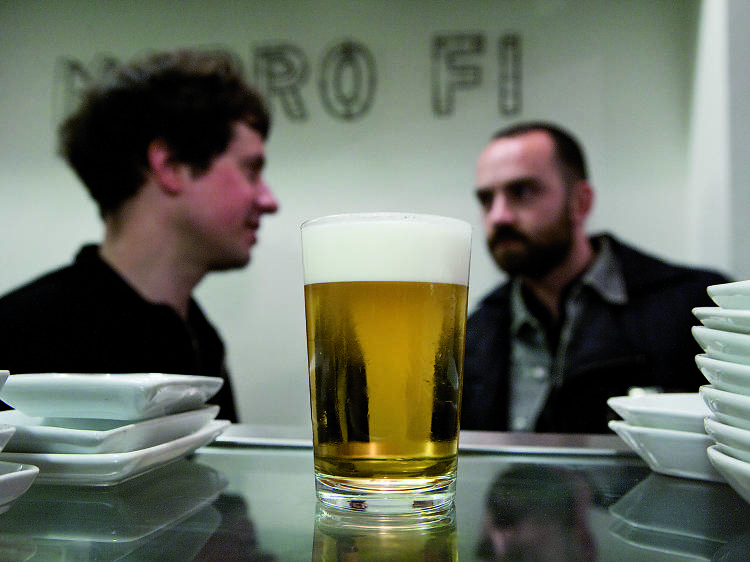 For some time now, the Morro Fi blog has been considered an essential website for those who aspire to keeping their stomachs happy. These one-time explorers of anchovy and 'secallona' (Catalan cold sausage) havens have set up their own oasis. Working in a tiny space, Marcel serves the aperitifs that he has always wished he could have found in bars. Marcel’s draught beers hide a secret that only you can see if you pay close attention to the hands of this man who is known as the Rimbaud of the beer tap. Two fingers of poetic justice, that’s what you'll find in each glass. 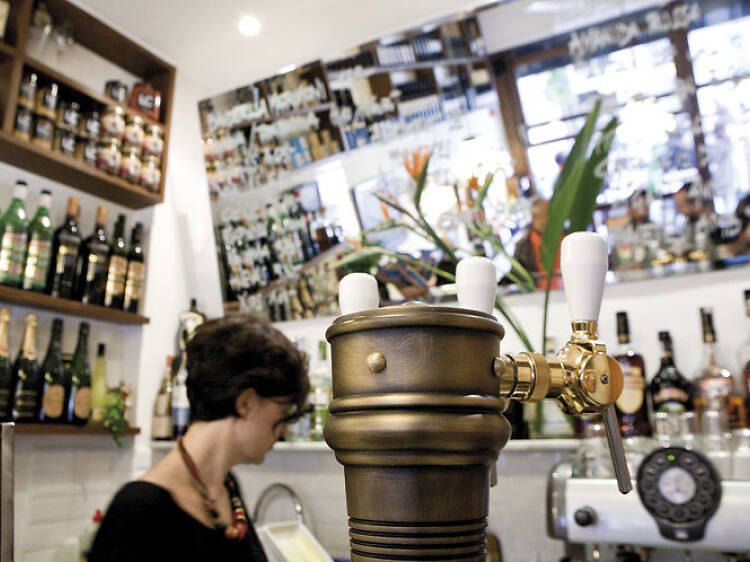 Chickpeas with prawns, tasty potato omelette, mushrooms with garlic and parsley, amazing olives – the problem is knowing where to start. La Tieta is just a place with a marble bar that offers good wine, bottles of vermouth and an endless flow of draught beer. You won’t find any classics on the wine list – this week they’re in love with Mallorcan wine, and next week they’re crazy about Galician wine. There’s nothing unusual here, no secret, just good traditional food made from fresh ingredients and with skill and enthusiasm. 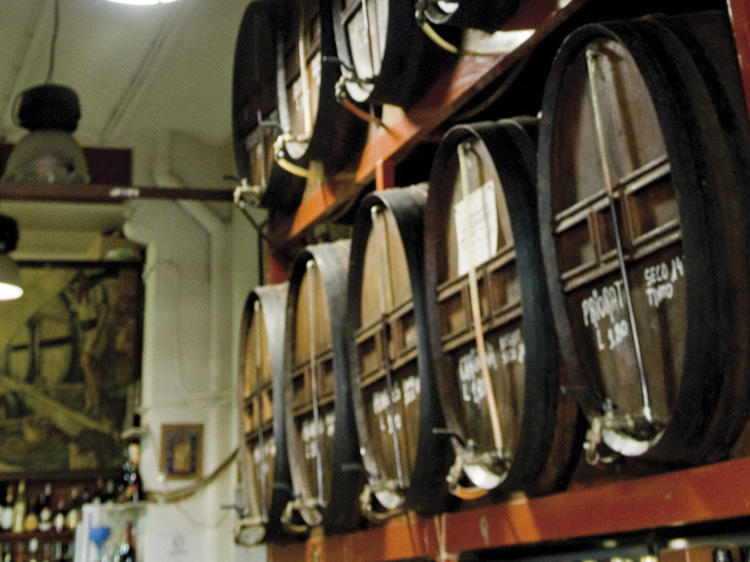 The main feature of the Bodega L’Avi Manel is a large mural of grape harvests, in the same brown tones as the wine from Gandesa. The property was built in 1960, and the proprietors have managed to highlight the new while still showing their love for the old. As you walk in, you can't help but notice the giant barrels on your right; they're full of wines from the Penedès, Rioja and Priorat regions. (They also offer various brands of Catalan cavas.) To your left are barrels of sweet wines, and dusty bottles (among them Pujol rum for making 'café cremat'), and the latest names in beer. The snack menu runs the gamut from traditional vermouth accompaniments to a bit more modern tasts such as hummus with anchovies and vegetable fajitas. The clientele is equally varied. 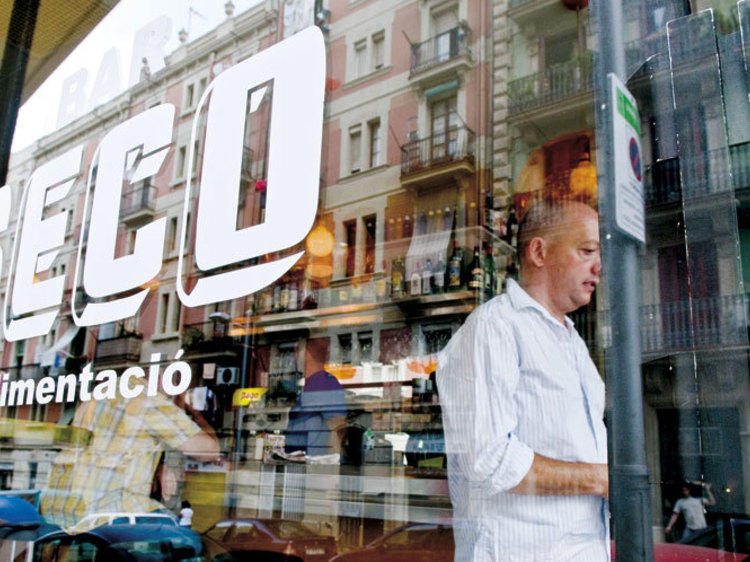 This bar belongs to the Slow Food movement – they use local, sustainable produce to make the dishes for a menu that is quite short but more than sufficient to satisfy hungry bellies. Their bio-patatas bravas are rightly renowned. As is the outdoor terrace, just in front of the Montjuïc air-raid shelter. 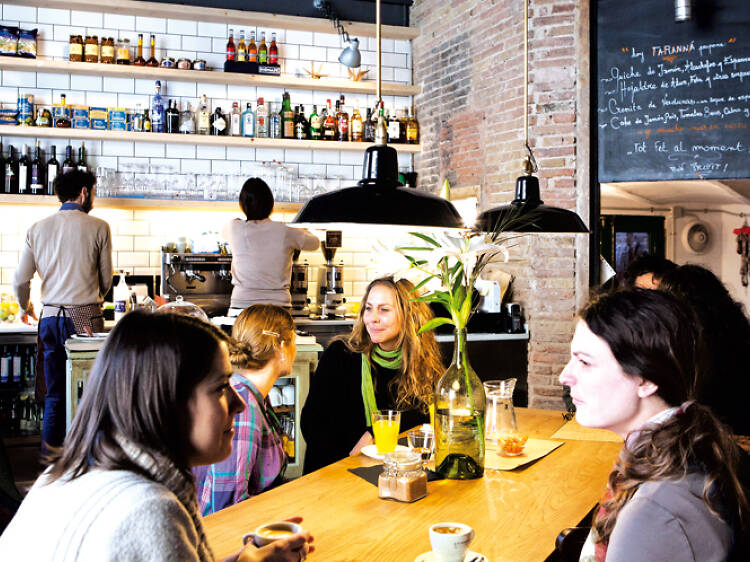 Tarannà is a special place. The light is magnificent in the afternoon, no joke. When night falls, there’s nothing like ordering one of the many beers on the menu to go with an organic chicken and avocado sandwich, a favourite. Breakfast, vermouth, lunch, gorgeously sweet snacks, dinner and quality drinks. The combination of versatility, modernity, quality and simplicity, and surprisingly attentive and fast service make it impossible not to be seduced by this oasis. The ideal is served up once again in Sant Antoni. This must be love. 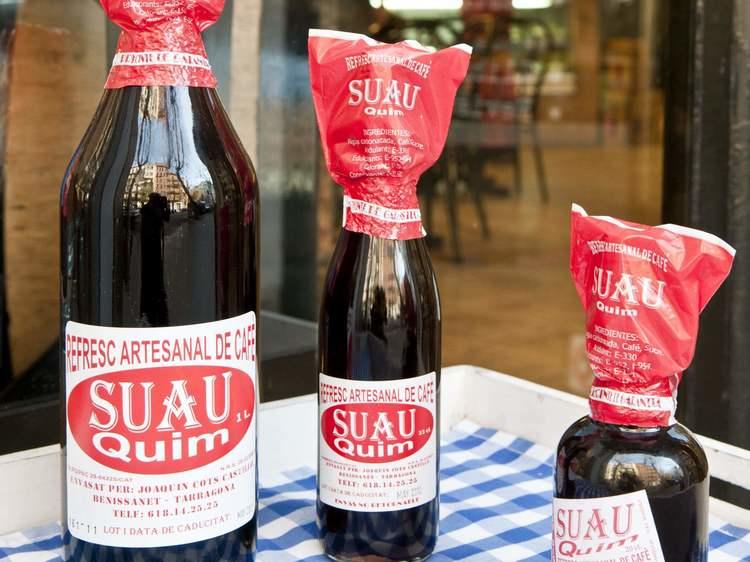 At the Casa Mariol Wine Bar, which is part of the bodega of the same name, you'll have the chance to get to know Suau, which is an version of a drink (a blend of soda and coffee) that was popular in the Ribera de l'Ebre region decades ago. You can also taste cask wines from the Ebre, accompanied by a nice 'clotxa' (bread stuffed with herring, onions, tomatoes and garlic) and then top it all off with delicious cakes from Batea (a town also in the Ebre). 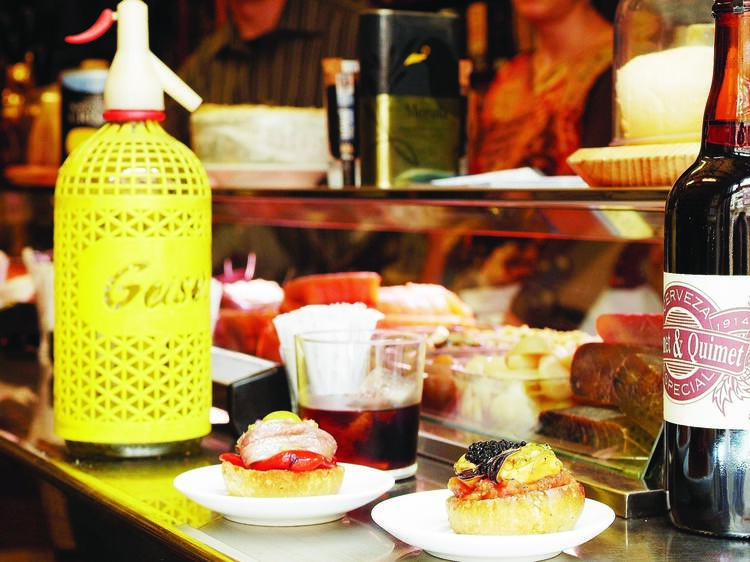 Packed to the rafters with dusty bottles of wine, this classic but minuscule bar makes up for in tapas what it lacks in space. The specialities are 'conservas' (shellfish preserved in tins), which aren't always to non-Spanish tastes, but the 'montaditos' (sculpted tapas served on bread) are spectacular. Try salmon sashimi with cream cheese, honey and soy, or cod, passata and black olive pâté. Get there early for any chance of a surface to put your drink on. 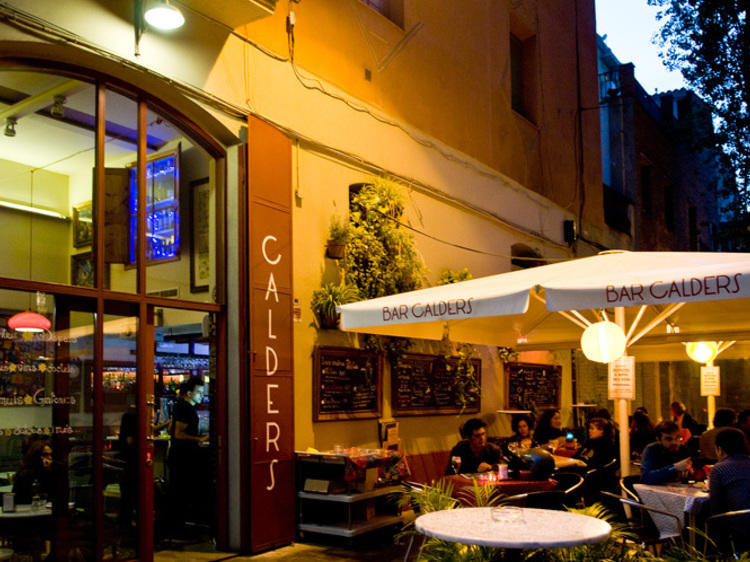 For all Pere Calders fans – God has heard your prayers. The cul-de-sac named after the writer has recently become home to one of the loveliest spots in Sant Antoni. They have books by the Catalan author, the draught beer flows freely and there’s a selection of tapas that sends shivers of pleasure through the district. Obviously, the best thing to try is the vermouth. They stock four brands, but if you want to try a Priorat, then you should go for the one from Falset. Incidentally, the outdoor terrace is one of the district’s best kept secrets: You’ll just keep coming back. 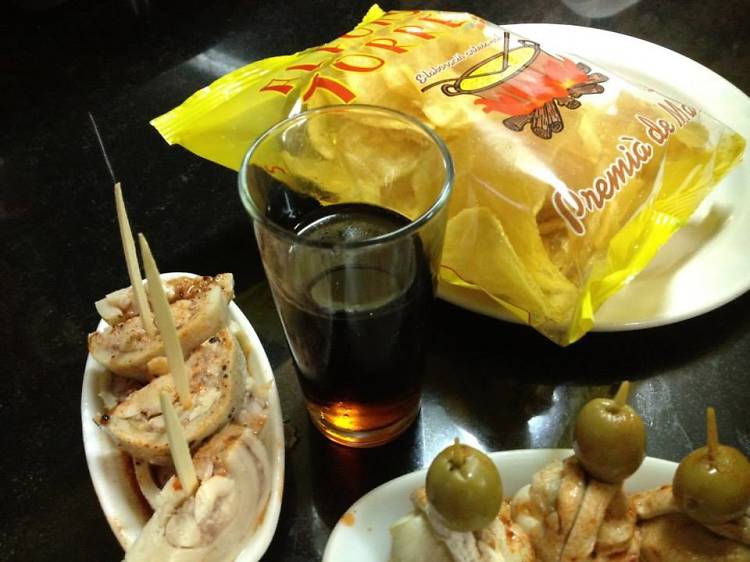 Sitting at one of the marble tables of this Gràcia wine bar, gobbling up anchovies as if there was no tomorrow and asking for one quinto (small bottle of beer) after another, you cannot avoid the collection of clocks that adorn the space. Old clocks are ideal metaphors for the passage of time and places that are stuck in it. But metaphors are for cowards, and the fifth quinto is what separates the boys from the men. Waiter! 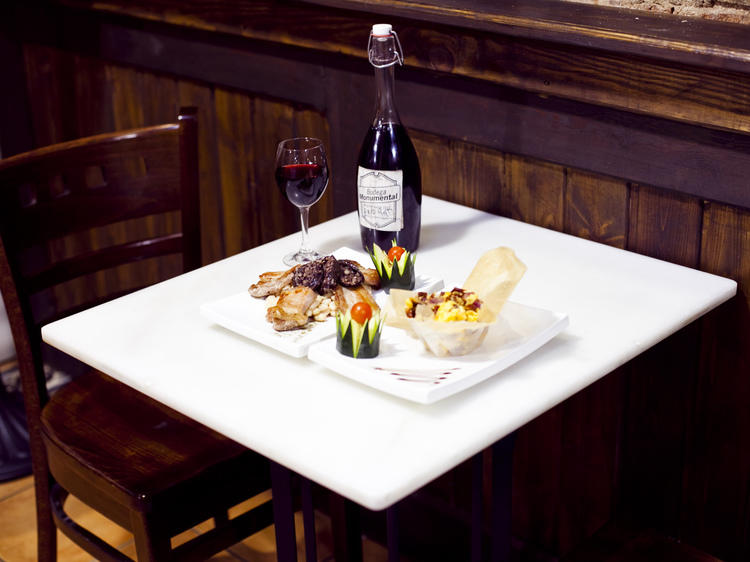 It happens a lot in American sports. The Dodgers left Brooklyn for Los Angeles. The Grizzlies left Vancouver and landed in Memphis, where that species of bear doesn’t exist, by the way. But it also happens in Barcelona’s league of wine bars. La Monumental was located next to the Monumental bullring, but moved to Hostafrancs, keeping a part of the original spirit and expanding the space with a huge dining room. They still serve the famous Tere mussels, of course. 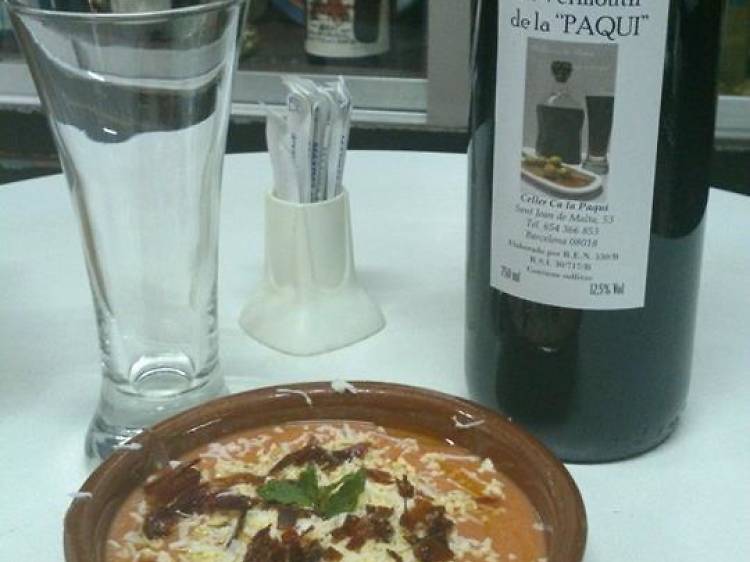 This is a wine bar that should be loved as much for its meals as its clientele, combining local regulars with many others from around the city, who almost seem like they come from a different time zone. 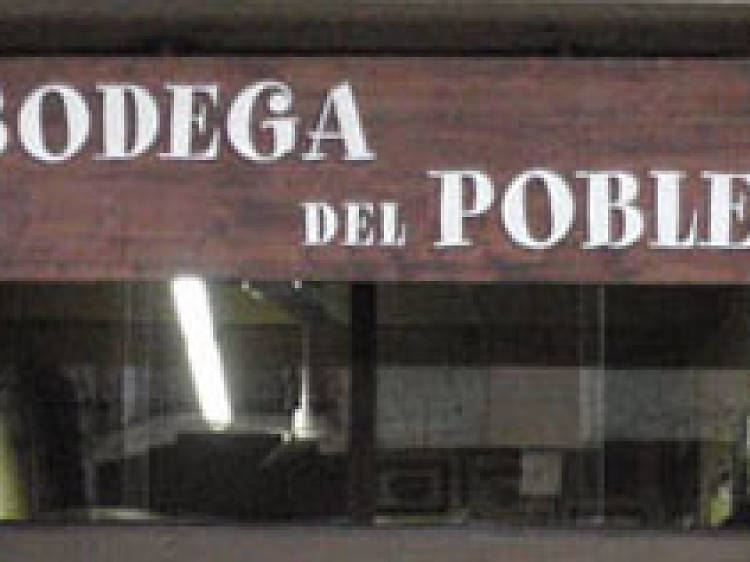 It’s right next to the Sagrada Família, but the Bodega del Poblet resists the invasion. The dining room at the back pays homage to the Republic, with its exhibition of posters, along with a parade of bottles and soda siphons. Any tourists who happen in are probably looking for Starbucks, but end up happily sipping a vermouth instead.