At many of the best hotels in Brisbane, you'll find evidence that the city's hotel scene is changing. It used to be a town with a small number of inns all running at high occupancy, due to its role as a tourist hub and the massive convention centre that sits just across the river from the CBD.

Now, though, it seems each new month brings a new opening. Along with the fresh properties come fresh approaches. The boutique revolution has well and truly hit town, with new operators looking to activate long forgotten neighbourhoods, and the big chains inspired to produce tailored offerings for a more sophisticated clientele.

In short, it’s getting harder to hit a bad, overpriced hotel in Brisbane. Below, you’ll find our picks of the best. Still, the change continues — in the next two years no less than eight major properties are scheduled to open in the Queensland capital. Watch this space.

Looking for a place to rest your head? Our picks of the best hotels in Brisbane are below. 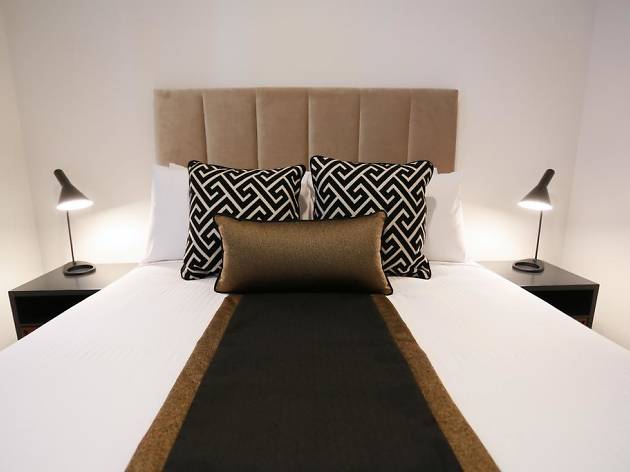 The “little black dress” of apartment hotels. That was the inspiration behind the first of what’s planned to be a series of properties around Australia from womenswear designer, Alex Perry. And he’s pretty much nailed it, the 140 rooms are a timeless, unfussy combination of practicality and understated luxury. There are two styles: blonde and brunette. The latter is the pick, its dark, textured wallpaper adding a nice flourish of charisma to the hotel. As you might expect, the experience is aimed at female travellers in particular, with every room featuring ghd appliances and satin clothes hangers. The executive apartments come with a kitchenette and boast balconies, garment steamers and high-speed internet included in the room charge. Upstairs, the rooftop terrace and its heated pool have some of the better views you’ll find in Brisbane. Downstairs, Delfina’s Bistro doubles as the hotel’s restaurant, but for something different the Emporium precinct is just across the road while buzzy Fortitude Valley is a five-minute walk away.

Time Out tip: Instead of the Valley, head towards the river to try Green Beacon and Newstead Brewing Co, two of Brisbane’s best brewbars. For breakfast, Nodo Donuts — gluten free doughnuts baked, not fried — is just around the corner. 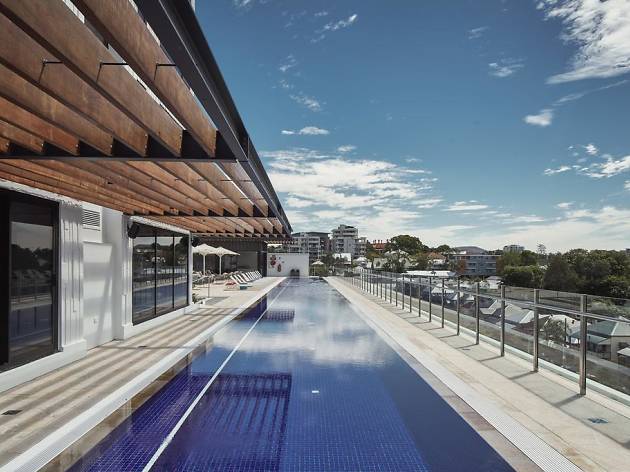 Look at a map and Spring Hill should be to Brisbane what Surry Hills is to Sydney. But it’s not. The suburb’s pretty cottages crowd around a high street that was long ago given over to government buildings and half-arsed developments. The Johnson is now looking to correct the narrative and activate the area, moving into one of those old government buildings: the hulking, heritage-listed, Karl Langer designed former Main Roads Department. Like all Arts Series hotels The Johnson is aligned to an Australian artist. This time the abstract works of Michael Johnson are scattered about the place. Against the property’s ivory white walls, it creates a striking effect, the bold colours are just about right for a city very much on the up. That same treatment adds to the sense of scale throughout the property. Everything feels oversized here — even the reasonably priced studio suites. Outside, Spring Hill is still coming along but there are jewels — the heritage listed Spring Hill Baths; the award-winning Alliance Hotel gastropub — and both the city and Fortitude Valley are within walking distance.

Time Out tip: Make sure you wander down the hill to the 480 Queen building on the edge of the city. On the ground level you’ll find Taro’s, often rated as some of the best ramen in Australia. 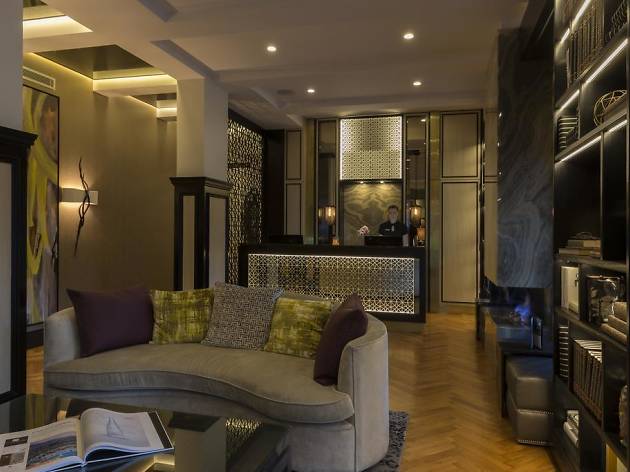 The first thing you should know about the New Inchcolm is that owner Peter Flynn was born there. Such is the long and quirky history of this neo-Georgian edifice on Wickham Terrace, once a doctors’ residence in Brisbane’s medical district. A longtime Brisbane boutique favourite, a 2014 re-do as an MGallery property has given it a new lease on life. The building now packs a darkly romantic vibe, its various room types sharing a taste for rich oak, mirror tiles, angular geometry, chrome and textured fabrics. With iPads and maxi bars throughout, even the standard suites are much more thoughtfully appointed than most in their category.

Time Out tip: Ask for a swanky Inchcolm Loft with its top floor views towards Fortitude Valley. They’re nice and spacious for two and big enough to kick on in, if you want to bring people back after a night out. 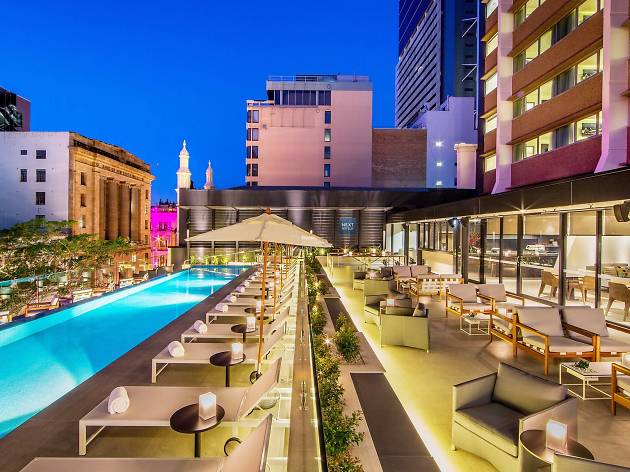 The first hotel in Australia to allow guests to automate both check-in and check-out, NEXT took over Lennons in 2014 and, with its focus on cutting edge technology, brought an old-school lodge to the forefront of Brisbane’s accommodation market. The rooms aren’t huge but excellently appointed — crisply modern, with plenty of dark wood and large comfy beds — all come with a smartphone that controls everything from the television to the air-conditioning. Perched at one of the highest points of Queen Street Mall, it has excellent views across the entire city, the open-air fourth level hotel bar allowing you to people watch on the shoppers below.

Time Out tip: Ask for a room at the southern corner to catch a glimpse of the river and South Bank beyond. 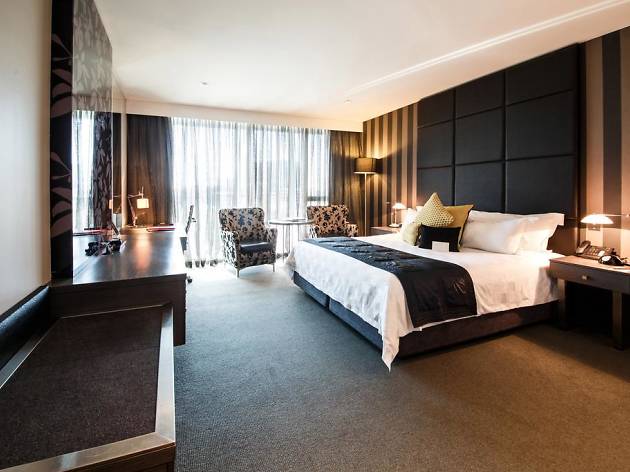 It’s hard to believe Emporium Hotel has been at its swank Fortitude Valley digs since 2007. The 102-suite property might be showing the first few signs of age, but it hardly matters. The hotel is directly overseen by owner Anthony John and his family and that attention to detail shows — one regular has been coming back every month since the hotel opened. The rooms are slick and spacious, even if the gleaming, luxe treatment might be a bit too ostentatious for some. Helping sell the property is independently operated Tartufo on the ground level. It’s one of the city’s very best Italian restaurants, and packs a specially imported oven for authentic Napoli pizza.

Time Out tip: Head right out of the hotel, across Wickham Street and down a small alleyway to find Ze Pickle, an ultra-hip Gold Coast import that flips some of the best burgers in town. 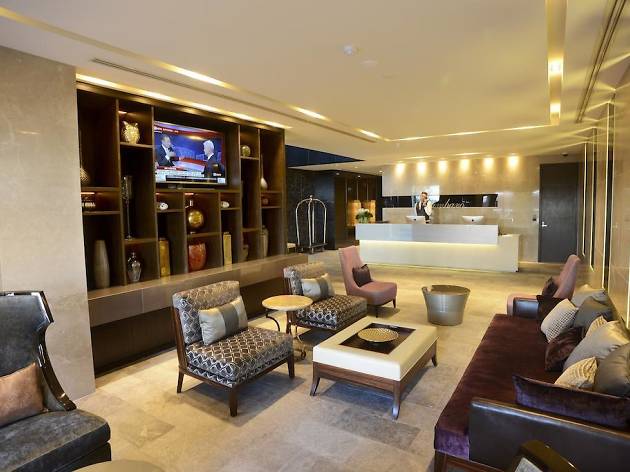 If it wasn’t for Spicers Balfour this would be the most quintessentially Brisbane hotel around, set as it is on the edge of the city, looking out over the leafy inner suburbs of Paddington and Red Hill, their hills crowded with heritage-listed Queenslander houses. It’s a terrific view if you’re staying at that end of the property, but there’s plenty else to recommend Gambaro Hotel: a darkly luxurious fit-out of plush carpet, cool surfaces and warm lighting, an enviable location right on buzzy Caxton Street and an almost faultless attention to detail from the staff. The Gambaro family are giants of the local hospitality scene so the on-site restaurants, Gambaro Seafood Restaurant and Black Hide Steakhouse, are two of the better eateries in town. If you want to venture further, both well-heeled Paddington and the city centre are within easy walking distance.

Time Out tip: It’s hidden behind a curtain a couple of doors up the road, but make sure you find Seymour’s Cocktails and Oysters. Afterwards, dance the night away at Lefty’s Old Time Music Hall. 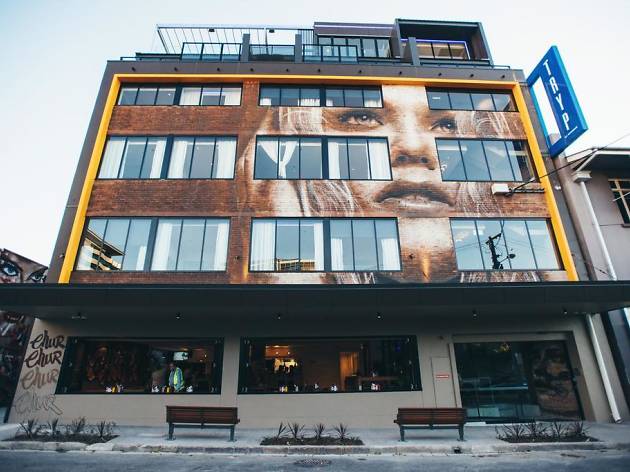 Right in the guts of the Fortitude Valley, Tryp is the place to stay if you’re in Brisbane for a good time not a long time. Festooned with street art and sandwiched between Chur Burger on the ground floor and a slick rooftop bar up top, it would almost be self-consciously hip if it wasn’t for the pleasant, Swiss-precise staff who run the place. The rooms are perhaps a touch pokey but crisply furnished and, besides, you’re in the Valley — hitting the town is the main thing here. Outside, some of Brisbane’s best bars and restaurants await. At the end of the one way street you have a choice: turn left and keep it civilised on swanky James Street; or take a right towards the mall and see where the night takes you.

Time Out tip: Tryp’s own rooftop bar is excellent but is nevertheless outclassed by Eleven, just around the corner. Packing a one-of-a-kind, uphill view of the city, it’s your destination for pre or post-dinner cocktails. 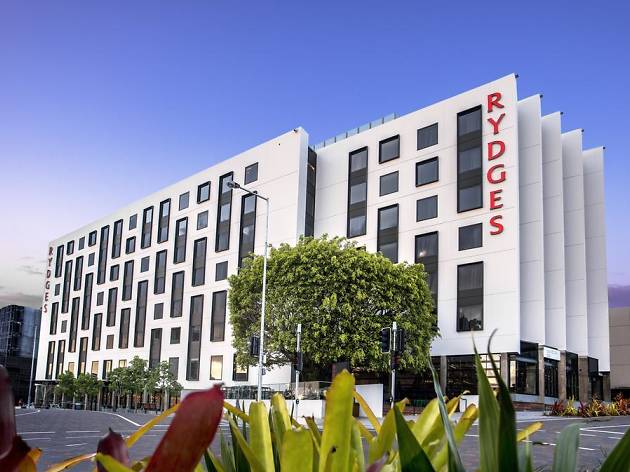 The Rydges hotel brand is going through a major overhaul in Brisbane. The South Brisbane original was completely refurbished in 2016, bringing it into line with some of the best hotels in town, but the star is now a 2017 instalment in the city’s Showgrounds precinct on the edge of the Valley. It’s a handsome little property with large, comfortable rooms, the themed details taking more than a couple of cues from sister brand QT. Outside, an urban hub is sprouting up around the hotel, neighbouring apartments bringing both a community and a series of exceptional food and beverage operations — see Banoi, the Lamb Shop and a soon-to-open second instalment of the city’s best French restaurant, Montrachet. The Valley is just a short walk away if you feel like getting crazy.

Time Out tip: The Tivoli and the Old Museum, two of Brisbane’s best live music venues, are both around the corner. Try to time your visit with a touring artist. 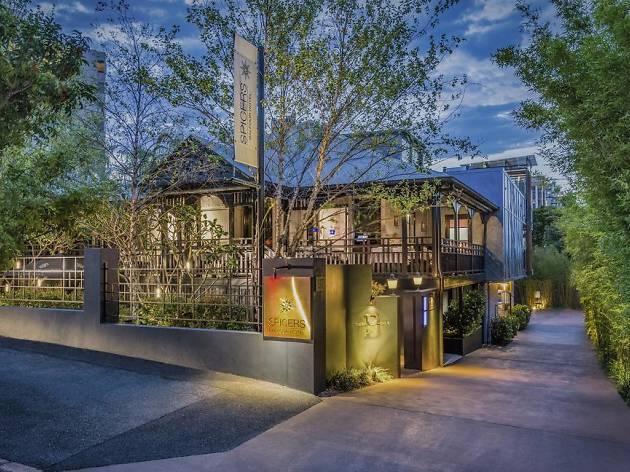 Spicers hits the big smoke. This popular luxury retreat brand started in Southeast Queensland so it feels right to have a pocket edition in the state’s capital. It’s grown too: you can stay in the smaller, character driven rooms of the original Queenslander, or opt for a Spicer suite in the Simla wing which opened in 2017. Occupying a leadlight-windowed brick terrace this space doubles down on the property’s art deco flourishes. Either way, you’re in the genteel inner suburb of New Farm, with bakeries, cafés and bars all within shouting distance; the city and Fortitude Valley are barely more than a 15 minute walk away too.

Time Out tip: It may lack the altitude of its competitors, but Balfour actually boasts one of the best rooftop bars in Brisbane, with spectacular views of the Story Bridge. 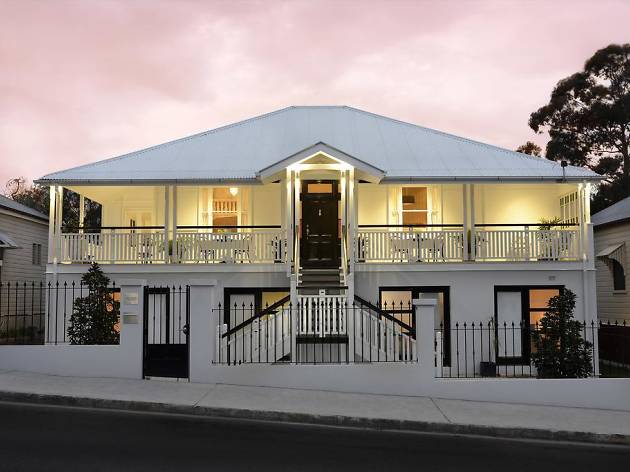 Brisbane is dominated by Queenslanders — the heritage protected, stilted (literally) weatherboard houses that crowd the city’s inner suburbs. A clutch of them have now been rejigged into swank guest houses and this is perhaps the pick of the lot. The location helps. In New Farm, it’s close to the Powerhouse, a contemporary multi-arts venue, the Brisbane Riverwalk, a heap of excellent cafes, bars and restaurants, and Fortitude Valley, the city’s entertainment precinct (if going ape is your thing). The former boarding house has been refurbed in crisp black and white, driving home its post-colonial charms. There are just three rooms, all decked out in moody greys and olive greens, and finished with sumptuous furnishings. The master suite reigns, its ginormous standalone tub a highlight.

Time Out tip: New Farm Park is a favourite weekend hangout for Brisbanites. Pack a picnic and make an afternoon of it.