The 15 best things to do in Busan

Busan’s finest stuff to see and do includes slums-turned-art-districts, historic temples and more.

Is Busan the most underrated big city on the planet? That’s a heated debate for another day, but the second-biggest city in South Korea is packed full of the sort of once-in-a-lifetime experiences and attractions that prise joyful excitement out of even the most hardened of cynical travellers. Busan is beautiful, breathtaking, bloomin’ brilliant.

Some three and a half million people are lucky enough to call Busan home, but this bustling port at the southern tip of the Korean Peninsula gracefully balances big city life with community charm. Want the bright lights of the city? Busy beaches? Some of the best restaurants in this part of the world? You’ll find all that here in spades.

But visitors looking for down to earth coffee shops, friendly markets, secret breweries, and Korean traditions? Those people will be plenty busy as well. Deciding on the best things to do in Busan will depend on what you want to do, but rest assured, you’ll have more than enough to see and do.

Spectacular seaside beaches, historic temples, vintage shopping and some of the best seafood on the planet; the San Francisco of South Korea awaits. Or maybe it’s time to start called SF the Busan of the US?

The best things to do in Busan 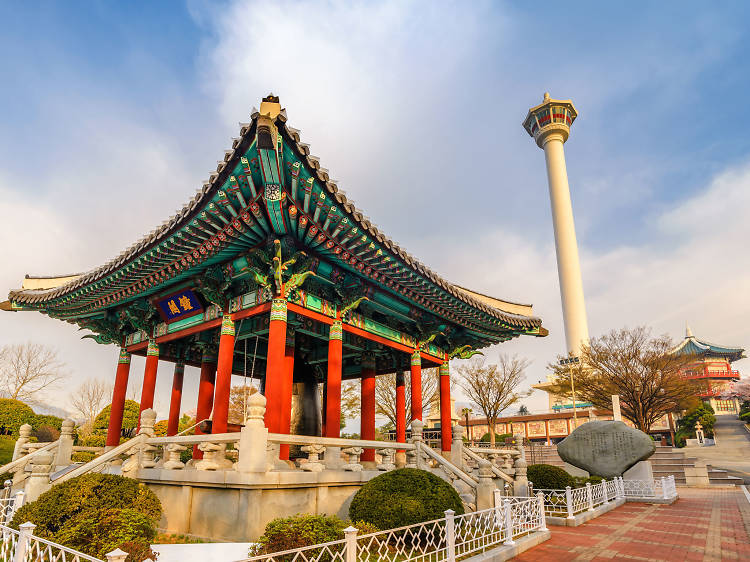 What is it? A 120-metre high tower with a kickass view.

Why go? To really get a sense of where you are, and to see what Busan looks like from above. Built in 1973, you get a brilliant view of the port from up here, and there’s even a café so you can snack while you see. 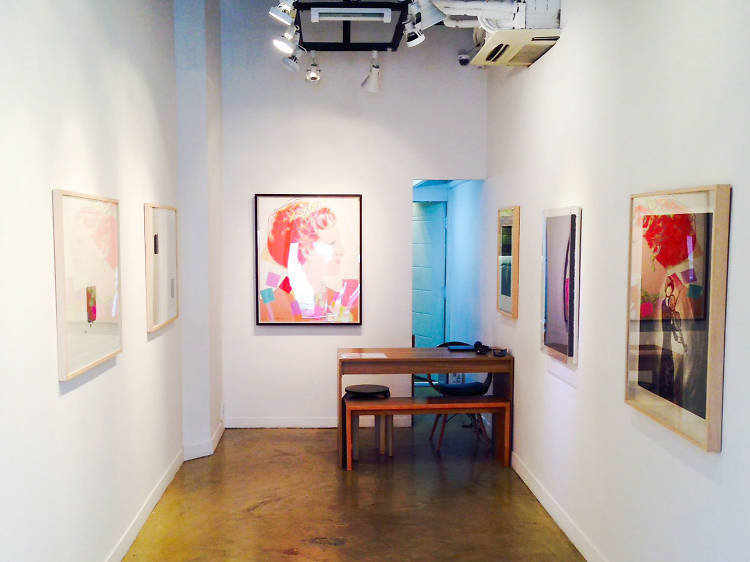 What is it? An art gallery specialising in contemporary works.

Why go? Put simply, the Kim Jae Sun is one of Busan’s most important art galleries. In ‘Marine City’, this place showcases an enormous range of art from some of the finest contemporary Korean artists. Prepare to see artists cutting edges like you’ve never before! 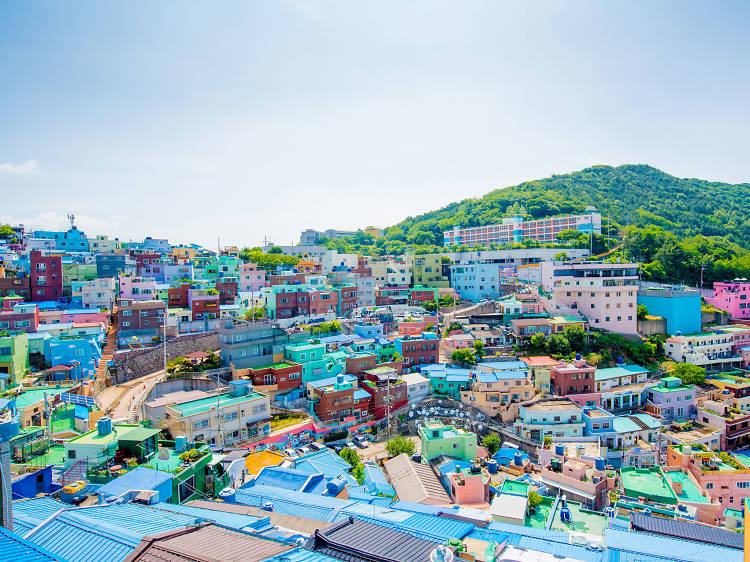 What is it? A stunning, kaleidoscopically coloured village. If it had the means, your Instagram would pat you on the back for the gift of this picture.

Why go? Because it’s so darn pretty! After being revitalised in 2009, this former slum is now known as the ‘Machu Picchu of Busan’. Gamcheon’s houses are all painted different colours, and within them, tiny streets and steep stairways lead you to street art a-go-go, with public sculptures scattered throughout. 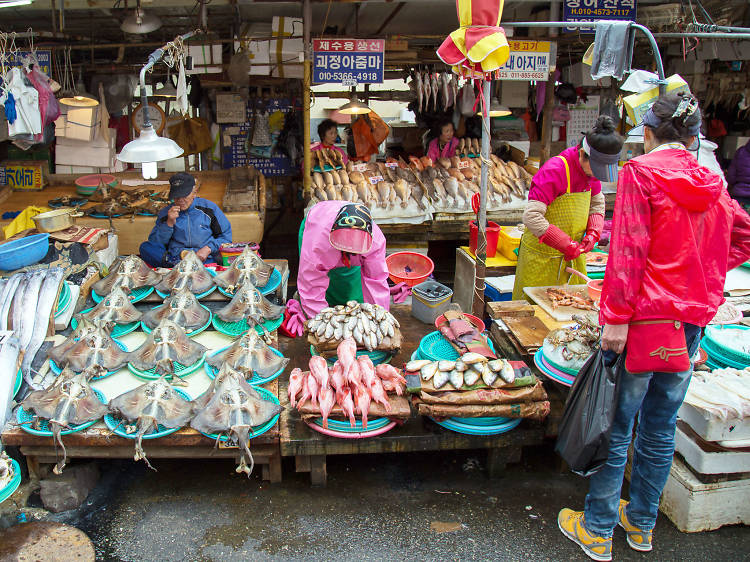 What is it? It’s only the biggest darn fish market in Korea, that’s all.

Why go? Open from 5am, going to Jagalchi is a must-do for food-lovers visiting Busan. Not only can you experience the organised chaos – run by middle-aged or married Korean women known as ‘Jagalchi Ajumma’ – but you can also stop to eat the fresh fish raw at the end of your visit. 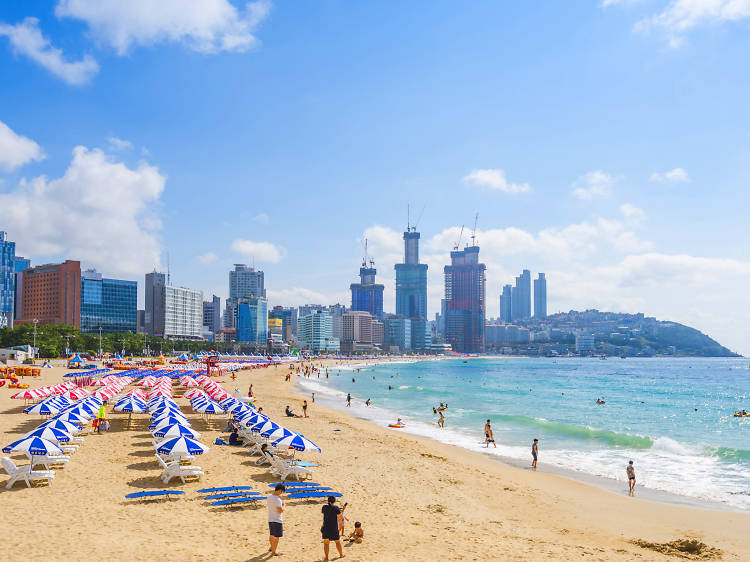 What is it? A ridiculously gorgeous beach that you can barely believe is at the edge of such a massive city.

Why go? For sunny, sandy good times, obvs. Haeundae Beach is only 40 minutes on the train from Busan station, or an hour from the airport, and is considered one of South Korea’s most beautiful beaches. And the sunsets are the stuff of legend. 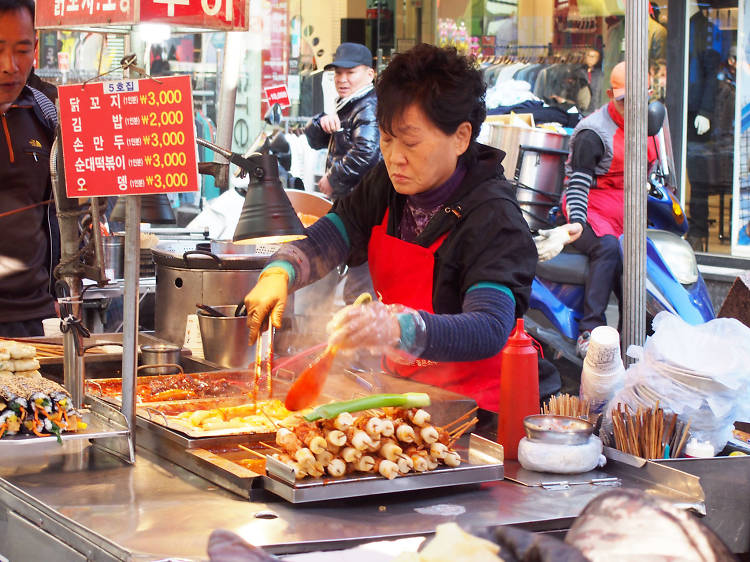 What is it? A skinny street teaming with food stalls and restaurants.

Why go? Arrive with an appetite, because you are here to eat. Situated in the labyrinthine Gwangbokdong area, Gwangbokdong Food Street is an absolute feast for the eyes and mouth. Dumplings are always a good idea, or go on an adventure and order at random (warning: may contain fish). 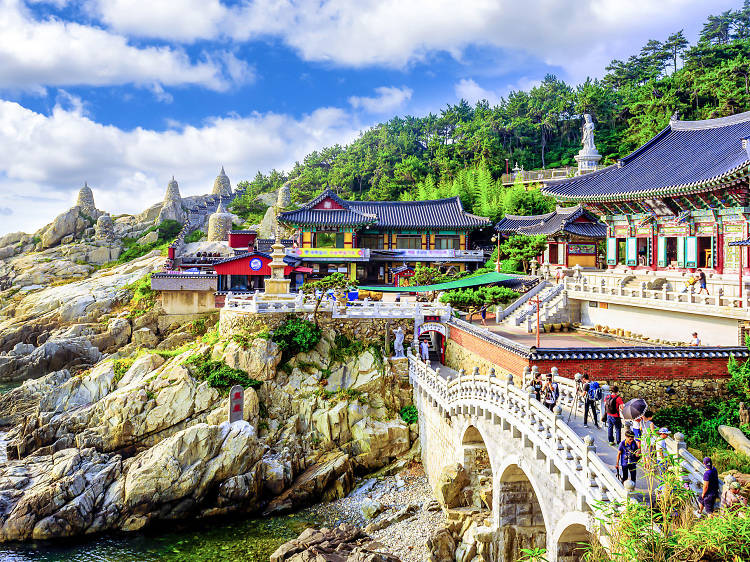 What is it? A beautiful beachside Buddhist temple.

Why go?  Traditional temples? Beautiful. The sea? Obviously, also gorgeous. Combined? Well, that’s another beast entirely. Haedong Yonggung is one of very, very few temples in South Korea that overlooks the ocean – so, naturally, it’s one of the most jaw-dropping. Haedong Yonggung is also pretty close to Haeundae Beach, so it’s both accessible and primed for a post-temple dip. 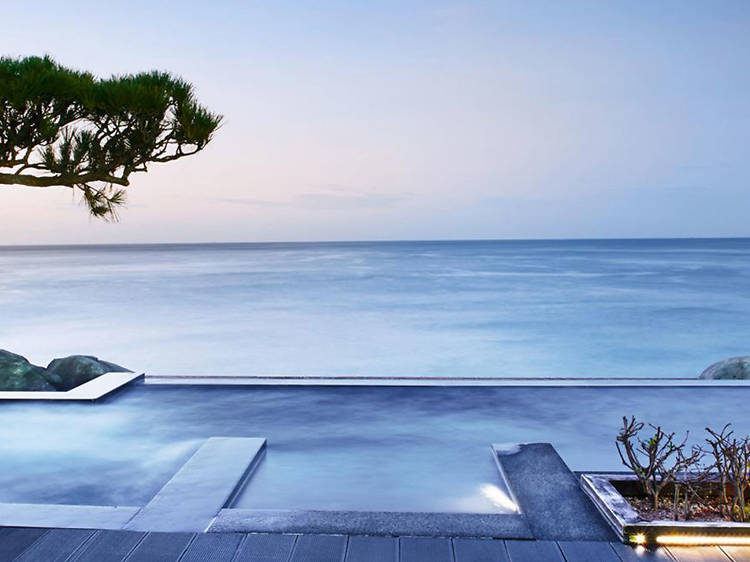 What is it? A seriously spectacular hot springs destination.

Why go? To bathe in luxuriant, mineral-rich waters overlooking the ocean. South Korea is scattered with hot springs, but Cimer Spa is one of its prettiest. You have to be a guest at the Paradise Hotel to get access, but it’s worth it. Plus there’s a bar onsite so you can sip a vino while taking in all those minerals. 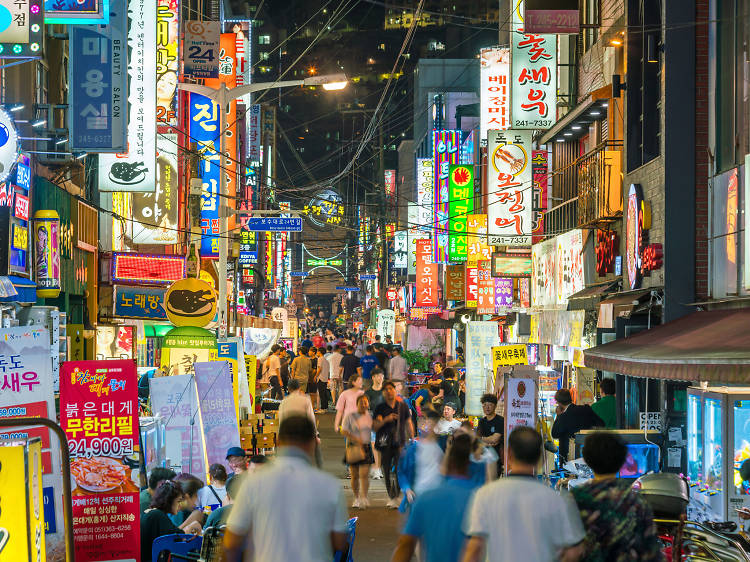 What is it? A bustling market in the Jung district of Busan.

Why go? To pick up pretty much anything you could want. One-of-a-kind souvenirs and gorgeous vintage offerings are all here, often for much, much lower prices than you’ll come close to in the West. Nampodong is best accessed by hopping off the train at Nampo Station. 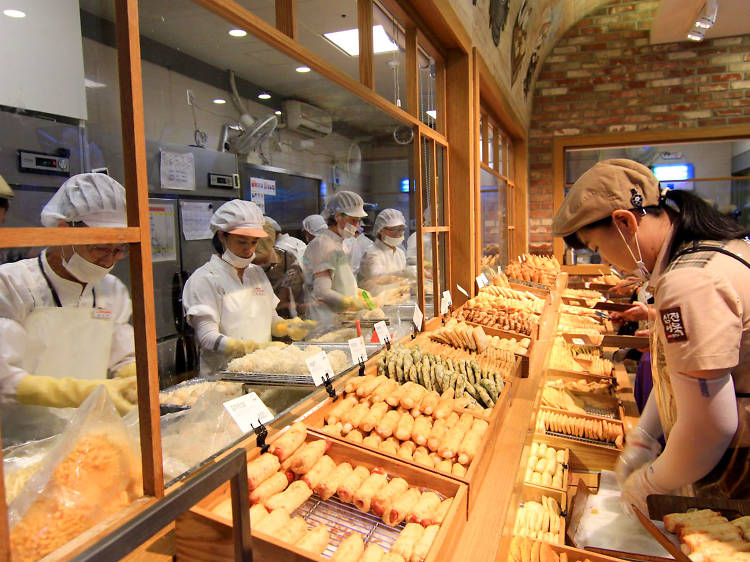 What is it? A Busan Station eatery serving some of the best fish cakes (‘eomuk’) in town.

Why go? Because Busan is said to have the best fish cakes in all of Korea, thanks to its seaside locale. They are made from the offcuts of white fish, transformed into various shapes and guises. Some even feature cheese. You can’t leave Busan without trying one. 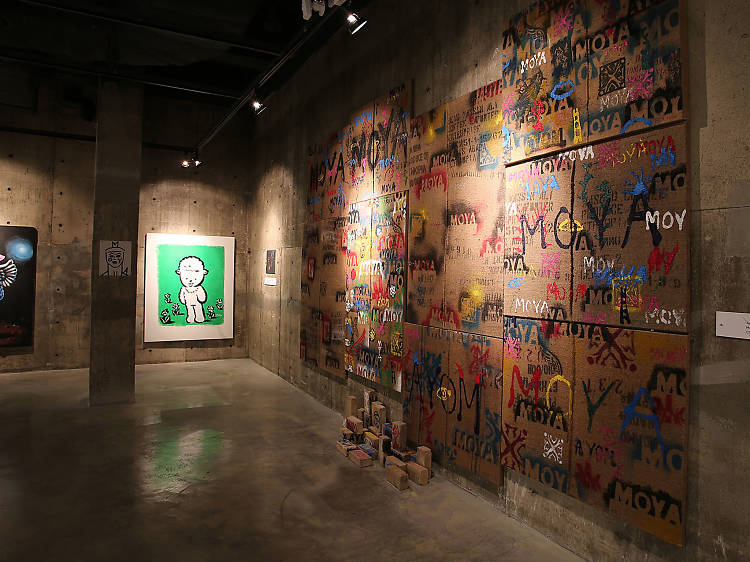 For the culture, obvs. Radium Art Center showcases a head-spinning range of art – from painting and photography to digital installations, and even music. You’re dead certain to find something that tickles your fancy. 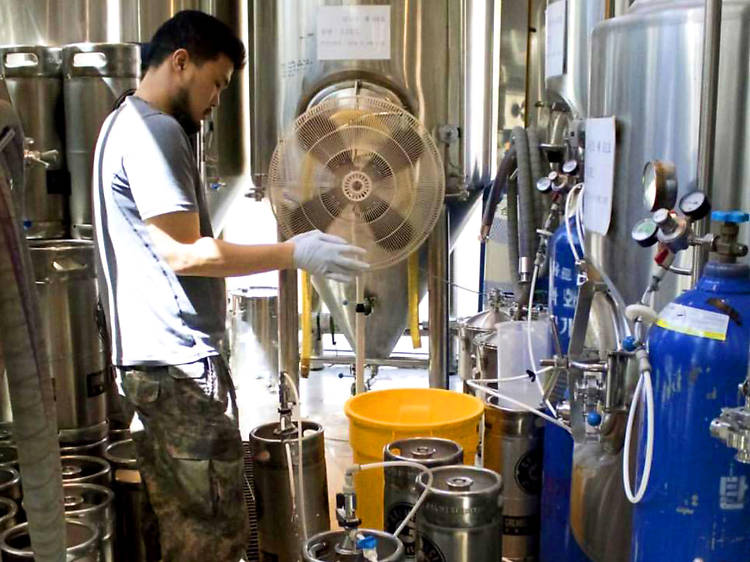 What is it? A buzzing brewery a mere block away from Gwangalli Beach, with pub locations scattered across the city.

Why go? Because beer. Galmegi Brewing Co is an American-style brewery and brewpub decorated with the works of local artists. Designed in polished concrete and pale wood, it’s a delightful place to drop in for a cold beer on a hot day. Tired of Korean fare? Try their American food menu. 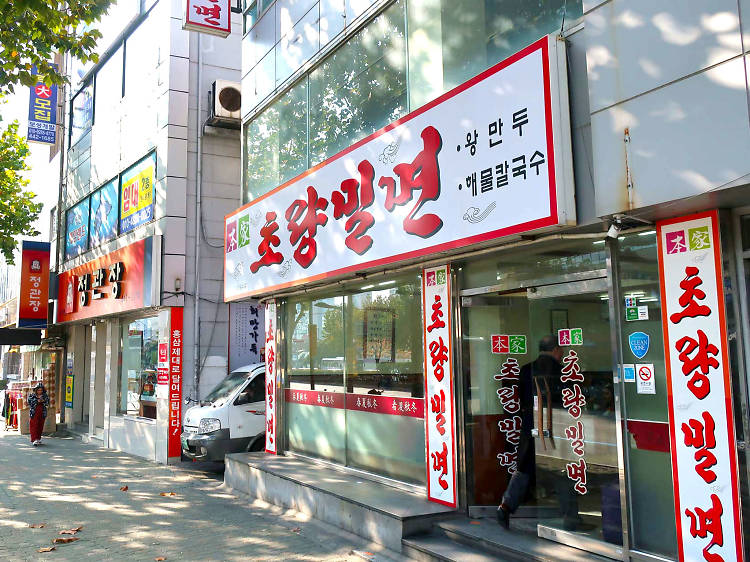 What is it? A restaurant serving real, proper Korean fare.

Why go? For an authentic Korean experience. Seated on the floor, order giant dumplings (‘wangmandu’) and traditional Busan iced soup squiggling with noodles (‘milmyeon’). It’s within short walking distance from Busan KTX Station, so frankly you have no excuse. 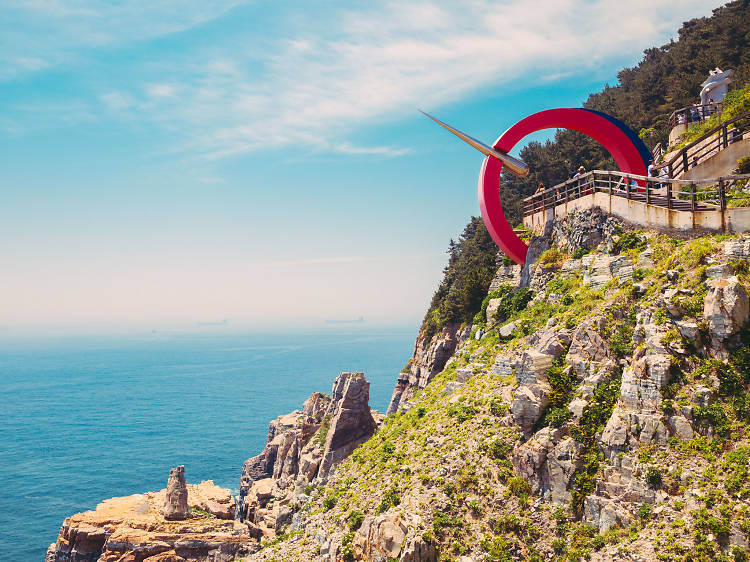 What is it? A beautiful spot where you can hike through bushlands and end up with foodie rewards.

Why go? To get a break from the city and see a spot of nature. Situated on the southerly edge of Yeongdo Island, trek through the bush (there’s also a train if your legs get weary), then head back to the seashore to feast on fishy fare from little tents pumping out local seafood. 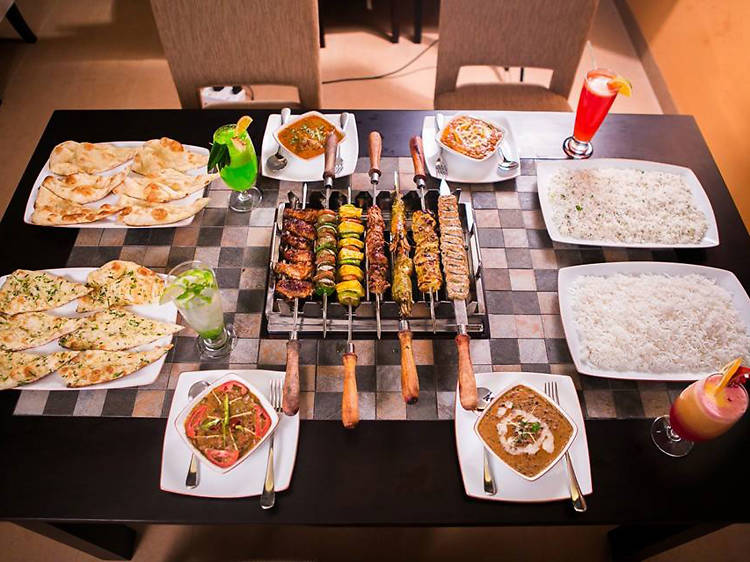 What is it? A Korean barbecue restaurant known for its deliciousness.

Why go? You’ve probably had Korean barbecue in the West, but to really know this sort of food, you’ve got to try the real deal. AnGa is one of Busan’s best. Come with a crowd if you can, so you can sample a bit of everything.