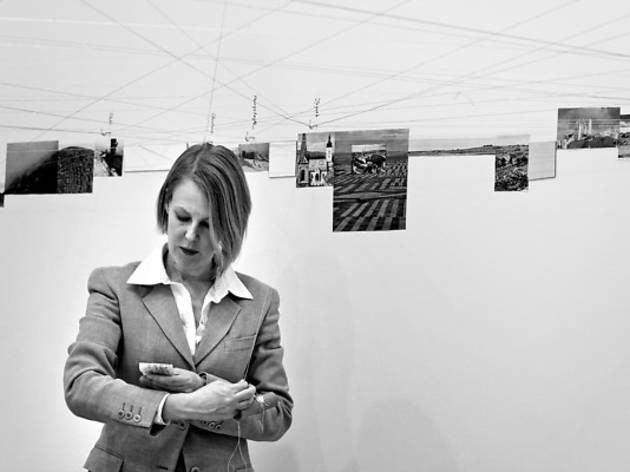 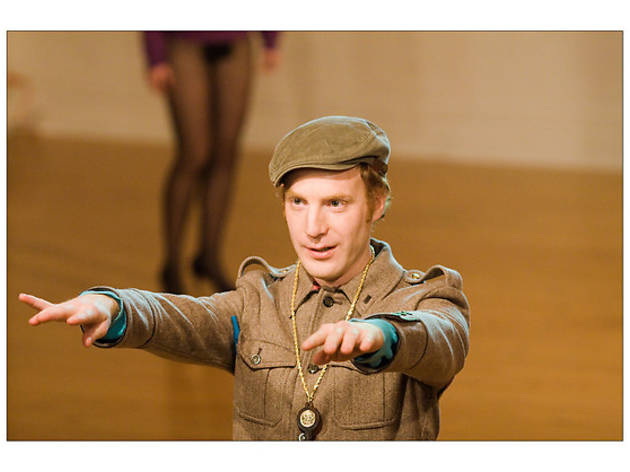 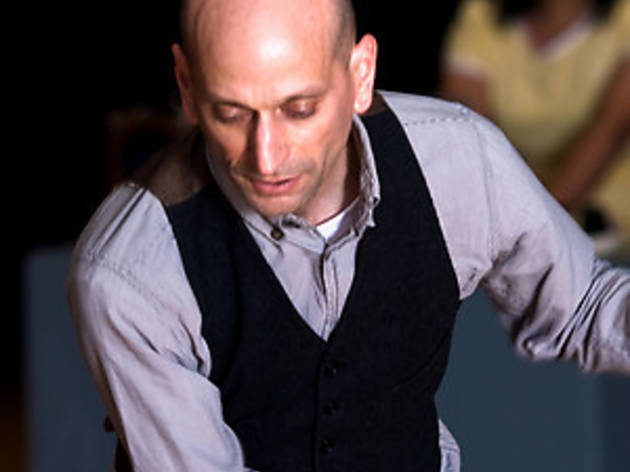 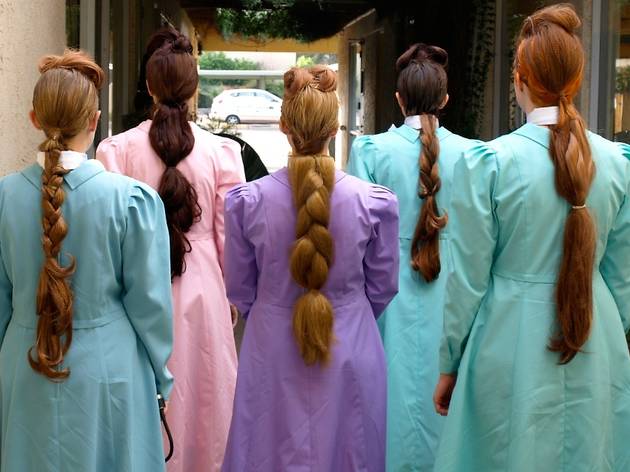 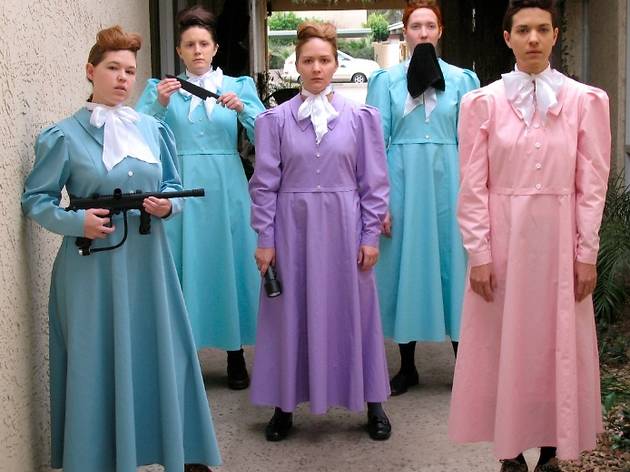 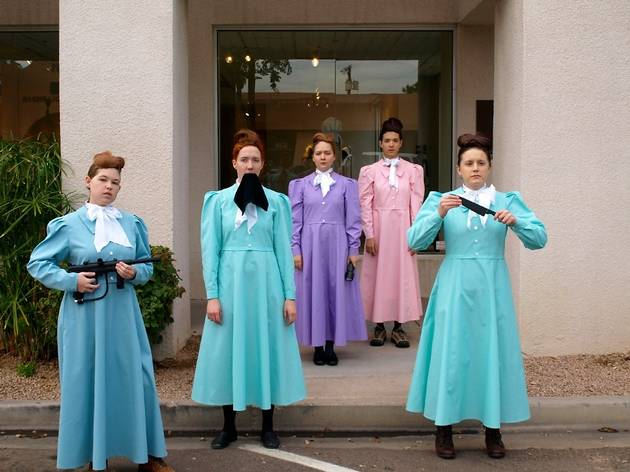 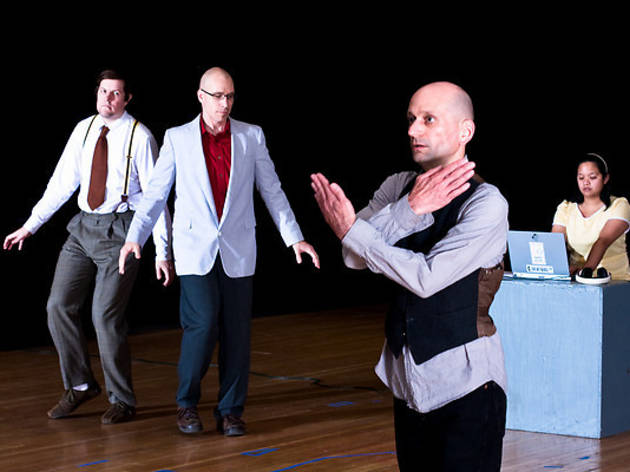 7/8
Photograph: John W. Sisson, Jr.Matthew Goulish, right, with Every house has a door in They're Mending the Great Forest Highway 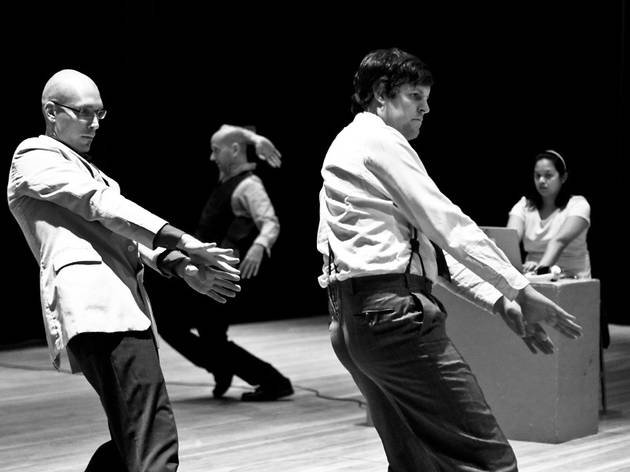 Sara Schnadt and Mark Jeffery move fast. I’m at my desk, slogging through e-mail and getting ready for our phone interview when I get a note that they’re down the street and wouldn’t it be better to sit down together in person? Already backed up on audio to transcribe, I’m sold on the idea, grab my coat, and walk over to Intelligentsia at the Monadnock Building. The café is crowded with a mix of Loop suits and funky kids and, as the three of us huddle around a small marble table, Jeffery and Schnadt move in on each side of me and finish each other’s sentences. I feel as if we’re in Paris hatching some Hail Mary salvo in May of 1968, but they’re just telling me about their performance-art festival at the Chicago Cultural Center.

IN>TIME, Friday 26 and Saturday 27, is the biennial they launched in 2008, two years after they first discussed the idea. Both have red hair and the residue of accents. Schnadt was born in Maryland outside of Washington, D.C., but was raised in Scotland; Jeffery is from a small village in Derbyshire between Birmingham and Manchester, England. “ITV was one of just four channels in the U.K. when I was 16,” Jeffery remembers. The South Bank Show had just adapted DV8 Physical Theatre’s Dead Dreams of Monochrome Men for television; David Hinton and Lloyd Newson’s tense dissection of desire and aggression in light of murders by “the British Jeffrey Dahmer,” Dennis Nilsen, “was startling to me. I had never seen that kind of work before.” He also saw—after his bedtime, with the sound down low—Derek Jarman’s short The Garden, one of Tilda Swinton’s first films. The expansive language he and the artists participating in IN>TIME use frames each subject just a little broader than you’d expect: Jeffrey describes the time and place he saw Dead Dreams in greater detail than Dead Dreams itself, and when I ask Lin Hixson what one of her earliest experiences with performance was, she gives me a very interesting answer.

“In the late ’50s I took a flight from Chicago to London that lasted over 16 hours. I remember my older siblings desperately trying to entertain me with cards, dolls and toys; I must have been throwing up. The experience of noise, wind and commotion in a confined space left me with time felt in the body.” Hixson, along with fellow Goat Island Performance Group founder Matthew Goulish, has launched a new project called Every house has a door—the two will share in-process selections from They’re Mending the Great Forest Highway, a work for three men that’s a dance…in addition to a few other things. “The vocabularies with which we speak and think about our work derive from those of dance, writing, music and theater,” Goulish says. “There is no ‘in general,’ though, when it comes to any of those categories. Some of [the writing we did for Highway], for example, comes from things I hear when I listen to Lin Hixson talking. ”

Also being presented by IN>TIME is Arizona-based Angela Ellsworth, who categorizes her work as belonging “between the categories.” Another Women’s Movement shows a polygamist’s five sister-wives line-dancing in silence; their exaggeratedly bumped hair and comically-fat braids combine with pastel prairie dresses for something you might describe as Big Love’s Mrs. Henricksons out at the country and western bar—if Big Love were a cartoon. The matte black props they tote, however—a machine gun, kitchen knife and flashlight—suggest something more sinister, or at least more serious. Movement “proposes a new community of women with their own revelatory potential and history not yet recorded,” Ellsworth writes of the piece.

For a week, I shared a thread in Gmail with these five artists. (In addition to curating IN>TIME and a half-dozen other roles each, Jeffery and Schnadt are both active creatives. In reading through everyone’s reply-to-alls, it strikes me that Ellsworth’s description of Movement’s sister-wives could summarize the spirit of the entire festival, especially in the absence of now-defunct Chicago performance art fest PAC/edge. Its “revelatory potential,” though, will be hard to wean off life support given the difficulty of finding arts funding in general, and funding for cross- and interdisciplinary art in particular. Ellsworth feels resources are available to her in Arizona, but “financial support for my performance and live art is another story—generally it comes from cities or countries far from where I live.” IN>TIME as a whole, in fact, is simultaneously of and without a place. Schnadt and Jeffery had originally included Croatian group OOUR in their 2010 lineup, but that appearance has been cancelled due to visa problems. Locally, IN>TIME includes a provision for commissioning new works by Chicagoans.

This year’s picks are Justin Cabrillos and Jessica Hannah. Faces, Varieties, Postures, by the former, is a portrait of the Cultural Center itself as a building with two histories, one as a public library and the other as a Civil War memorial. Cabrillos writes that “ordeal becomes a guiding method of choreography” in his enlistment of 1860s etiquette, stump speeches and minstrel shows for a single, half-hour “poetic space.” Meanwhile, eight performers including Hannah participate in a three-hour “domestic diorama showcase” titled The Living Room, the frame of reference for which follows roughly a century later. Hannah is interested in the post-WWII explosion of consumption and construction, picking it apart with tools as varied as old footage, live music, and olfactory experiences. (Hannah also runs her own business selling custom-designed natural scents.) “The Incubation program is integral to our concept for the festival,” Jeffery says.

“As important as it is to us to present established national and international art, we want to give those emerging within Chicago an opportunity to show their work right alongside it.”

IN>TIME’s biennial schedule feels right to its creators. It’s also the only viable frequency for an ambitious international undertaking put together by two people with a patchwork budget and self-imposed mandate to offer its multisensory experiences free of charge. “Realistically, this is something we’re really only able to do every two years,” Schnadt says. “As soon as it’s over we have to take about six months to regroup, then it’s another six to eight months of budgeting, and then you have to make all the arrangements and coordinate everyone’s schedules.” Both curators are quick to add that this labor they’ve signed up for isn’t something they see as optional. “There are a couple of other performance spaces in the Midwest,” Jeffery says across his coffee cup, “that you see working durational art into their seasons, like the Wexner [Center for the Arts in Columbus, Ohio] and Walker [Art Center in Minneapolis], but none of the big organizations here have really picked up the cause.” (He has a point, although venues like Links Hall and the MCA do present artists that would fit in with IN>TIME. Concentrating the work in a single place and time allowing comparison and conversation, though? I’ll give him that.) Later, in our Gmail discussion, something he’s written recalls in a flash the passionate, art-revolutionary energy he brought to our initial meeting.

“All I have ever known is working with ever-decreasing resources, but somehow we make do with what we have in front of us, and make this happen. It’s my calling to make sure that experimental, rigorous, innovative and adaptive work thrives in the city that I live in. You do it because you want to see it and, if you don’t see it, someone has to stand up.”

IN>TIME 2010, which includes a related symposium Friday 26 from 1pm–5:30pm, takes over the Chicago Cultural Center this weekend; download a program and schedule of events here.