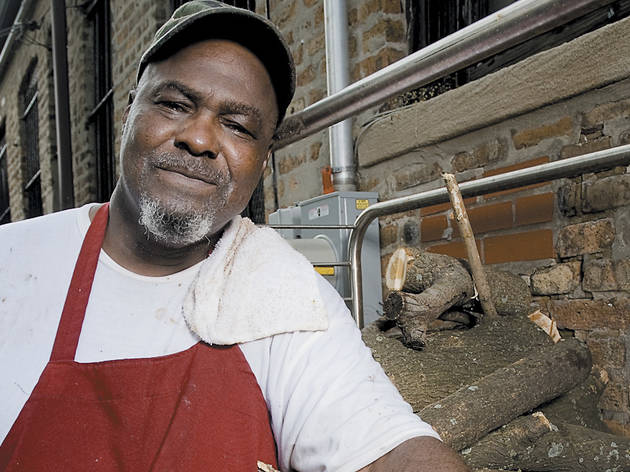 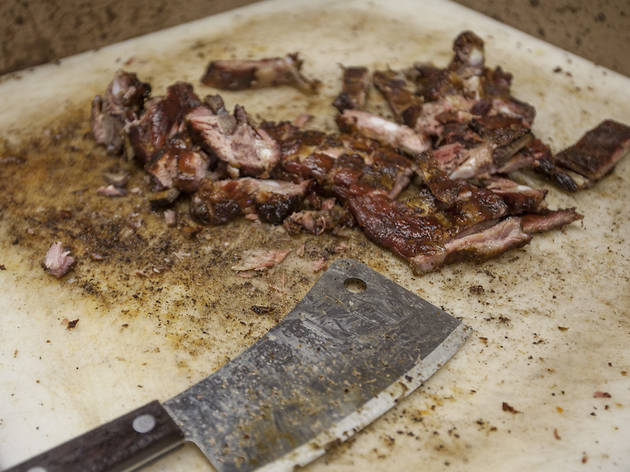 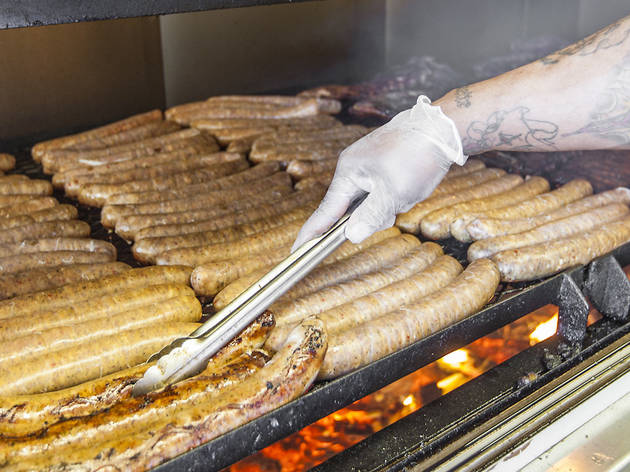 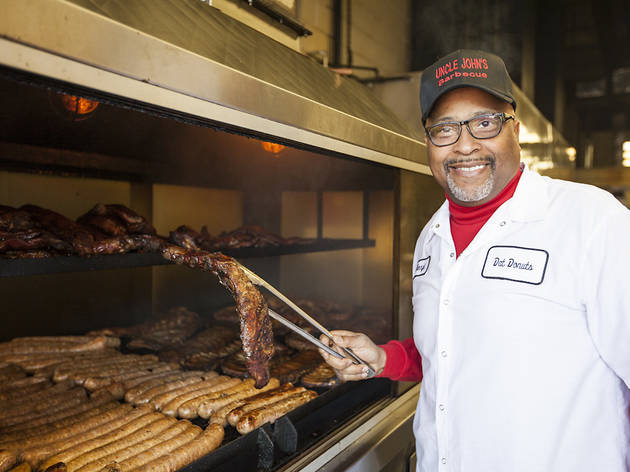 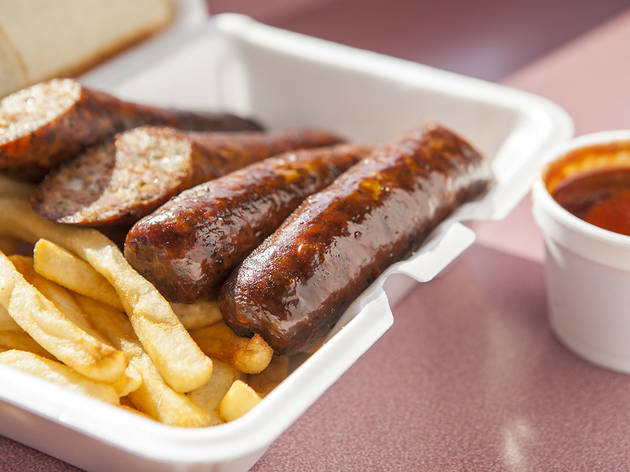 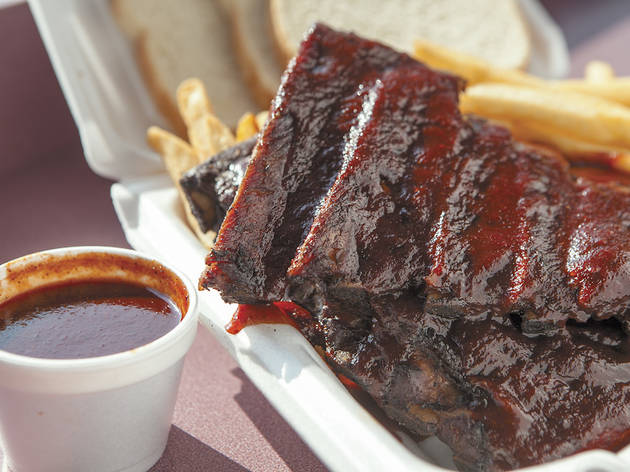 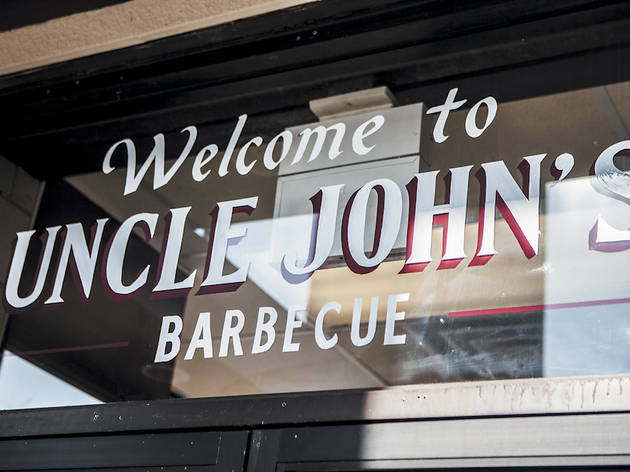 “Barbecue is hard work, especially when there’s demand. You can’t take man and meet the demand. Man gonna get tired, so you need machine.”

That’s Mack Sevier, revered pit master of Uncle John’s (and before that, Barbara Ann’s). He is the man, and, yes, he does sound tired. Sevier is 68 years old. He spent a couple of weeks over the summer in the hospital for heart trouble, calling in meat orders and coordinating spice runs from his bed. Before he got sick, he had his eye on expansion, but as a segue to a slower life. He shifted production of his famous hot links to Grant Park Packing to triple output (and to comply with USDA restrictions), hand-carrying his spice blend to the facility each week in an unmarked bag. Meanwhile, he looked for a location to sell these links, plus a line of bottled sauces and spice rubs.

“But then I got sick,” Sevier says. “And by the time I was up and around again, I heard Darryl was looking for some barbecue over there with his doughnuts.”

Darryl Townson runs Dat Donut, a popular mini chain whose yeasty glazed beauties could put Krispy Kreme in a headlock. Townson bought the building at the corner of 83rd and Cottage Grove after 17 years of success with the business, leaving him with a big parking lot and 5,000 square feet of unused space. “I worked for Leon’s back in high school,” Townson says. “So I’ve been around Chicago barbecue my whole life. Mack is the real deal. He has a product where people will stand outside in the cold for it. But I’m looking to bring them inside, provide a well-lit and safe space, a parking lot, make it comfortable.”

Sevier was comfortable enough with the setup to sell Townson his hot links recipe (which will continue to be produced at Grant Park Packing), as well as the right to call the restaurant on the Dat compound Uncle John’s (8249 S Cottage Grove Ave, 773-952-6236). Sevier says no written recipes exchanged hands, other than the hot links “formula,” as he calls it. But the purveyors, ingredients, eyeballed measurements and methods were all conveyed via informal training sessions so that, seemingly, the product is the same. From an outsider perspective (mine), the tips, ribs and links are pretty darn close to those at Sevier’s original location (337 E 69th St, 773-892-1233)—which is to say, delicious. There might be a little less smoke and a little less crusty char on the exterior of the meats, but that’s the price you pay when shifting from a wood-fired aquarium smoker (a “pit” in Sevier speak) that can cook roughly 150 pounds of tips at a time to a pellet-fired smoker (which Sevier calls a “smoker”) that turns out 700 pounds. That transition is, so far, the hardest for Sevier to swallow. (An old-school pit master who has always cooked with wood, Sevier didn’t even know what the pellets were when we spoke, calling them “little balls of stuff that come in a bag.”)

“His smoker is good, don’t get me wrong,” Sevier says. “But it really don’t do the same that the pit do. You’re gettin’ the heat, but not the smoke.” At this point in the conversation, he rhapsodizes about cooking with wood for a good 20 minutes, conveying the art of spraying it with water to coax the smoke, when to tend the fire and when to leave it alone, which wood is practical to use in Chicago (mulberry, “because you can get it and it’s good, and hickory’s so expensive you better be making furniture if you buying that”).

For now Sevier continues to man the pit at 69th (which he says he’ll keep for “maybe a year or two”), and he stops by the new Uncle John’s four to five times a week. Townson says when Sevier does, he tastes everything from the tips to the coleslaw, pointing out tweaks here and there. Sevier and Townson’s latest compromise is to start the meat in the pellet-fired smoker and finish it over wood in the pit, a plea bargain to combine real fire and volume. “You can use the name on the door, but if you do, it’s gotta be the same,” Sevier says. “He’s trying to do it right and he has a lot invested so he ain’t gonna mess around. But they’re just gonna have to get some grease on their hands.”