Chris Nugent is not going to mess up. It’s just not going to happen. Maybe it’s all the years he spent working for Mary Beth Liccioni, the famed owner of Les Nomades, or maybe it’s just in his nature. But the chef does not make mistakes.

This is the impression I got, at least, from Goosefoot, the off-the-beaten-Lincoln-Square-path, 34-seat BYOB Nugent opened with his wife, Nina. The restaurant, at present, serves one eight-course menu (not counting an amuse and a palate cleanser) and has no corkage fee. (A 12-course menu is in the works.) Everything on the menu is cooked perfectly.

Nubs of lobster interlaced with diaphanous agnolotti? Technically flawless. A fillet of loup de mer (sea bass) thicketed with microgreens and planted on tapioca pearls? Texturally winsome and faultlessly prepared. Quail is roasted optimally, accessorized with ginger-spiced lentils and miniscule globes of apple flesh. And the beef—the night’s big shot—is resplendent in its tenderness, and it goes without saying it’s seasoned on the mark. Would anything here not be?

The same absurdly high standards applied to the food extend to the service. I could tell you the pacing was on cue, the dishes were described with sufficient but not excessive detail, the glassware, by BYOB standards, is quite nice. But to me it’s the series of tiny machinations—messages seamlessly relayed from server to kitchen and back again, all so dishes don’t sit on the line, let alone arrive at a table while a guest is away—clearly at work here that tell me Goosefoot’s ambition is not that of your average neighborhood restaurant.

And we are lucky, in Chicago, to have a few restaurants attempting similar feats, small places far from downtown where chefs have carved out personal enclaves for high-level fine dining. Like Goosefoot, these restaurants have (marginally) increased the odds of running a successful high-ticket restaurant in a nonprime neighborhood by sparing diners the wine markup. The best-known is Schwa, the most unsung is Bonsoiree, and the new guy on the scene is Phillip Foss’s EL. Each of these has a certain shtick about getting in: for Schwa, it’s an infamous answering machine; for Bonsoirée, it’s a semi-underground dinner series; EL, the smallest of the bunch, first released seats through a lottery. For Goosefoot, you just make a reservation on OpenTable, and thank God.

This rightly suggests that Goosefoot, especially for such a new restaurant, has a certain maturity. This isn’t lost on the customers, who on my visit seemed a tad older and maybe a little stodgier than the folks I’ve seen at the Schwa/Bonsoirée/EL triumvirate—these are the types, perhaps transplanted Les Nomades regulars, who tote prized bottles from their cellars for the occasion. But there’s another draw to the fine-dining, neighborhood BYO genre aside from the wine savings, and that’s the promise of food that’s adventurous or experimental in a way that a restaurant with a River North or Gold Coast address cannot afford to be. This is certainly much of the appeal for the aforementioned trio, in fact sometimes to a fault. On my visit to EL soon after it opened, I found the food surprising—sometimes even shocking—but much of it didn’t taste very good. Goosefoot’s food, on the other hand, doesn’t err. But it also doesn’t surprise.

If I had to choose, I would certainly take edible over conceptually interesting, but I think if my meal at Goosefoot felt a little flat, this is why. Yes, there are certainly motifs threaded into Nugent’s food. He treats vegetables with precision and faithfulness, setting a precious few crudités over parsnip puree for a clean, crisp counterpoint to a luxurious, rich chestnut-mushroom soup. And then there is the thorny issue of the truffles, the aroma of which perfume that soup, the beef and a cheese course of Pleasant Ridge Reserve. I am not opposed to truffles, but their forcefulness cuts off the expression of other ingredients, and I’d rather see Pleasant Ridge Reserve speak for itself than fight to be heard next to a celery-truffle caponata. Last of Nugent’s culinary traits is a surprisingly sophisticated hand with desserts (often summarily ignored by chefs more keen on proteins and vegetables), as demonstrated by the two final courses: silky pumpkin mousse in nougatine powder and a crunchy-smooth square of chocolate topped with two briny sea beans. These end the meal on a high note, and yet still Nugent’s food is not especially memorable. It satisfied me, but it didn’t excite me. I wanted more personality.

This is why I was very pleased to meet Nugent’s wife. Nina is the front of the house: She greets you at the door, she hands you your coat on the way out. And in between she manages to have conversations with pretty much every customer that—if ours was any indication—make you want to be her best friend. It’s her relaxed manner in contrast to the serious, maybe-a-little-uptight servers’. It’s her genuine enthusiasm and natural ability to connect with others. Okay, it’s her Brazilian accent. Whichever it is, the success of Goosefoot is not only about bringing Les Nomades food to Lincoln Square, but making it feel vibrant and personal. It’s funny when you realize it doesn’t have to be the food that accomplishes that. 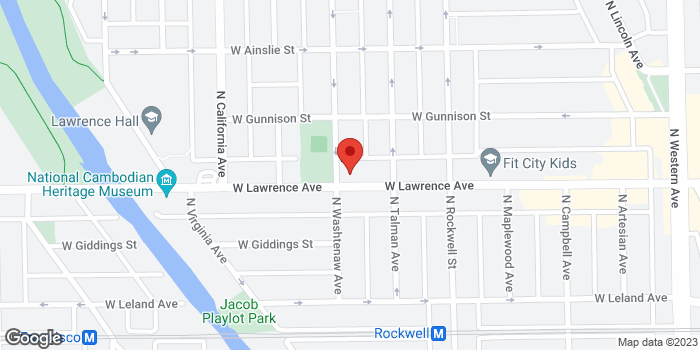