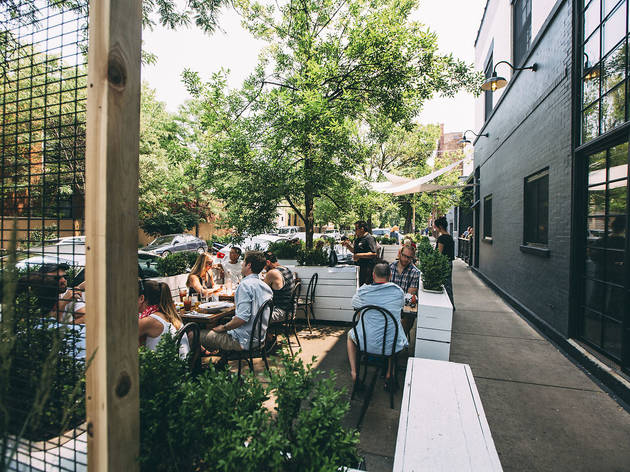 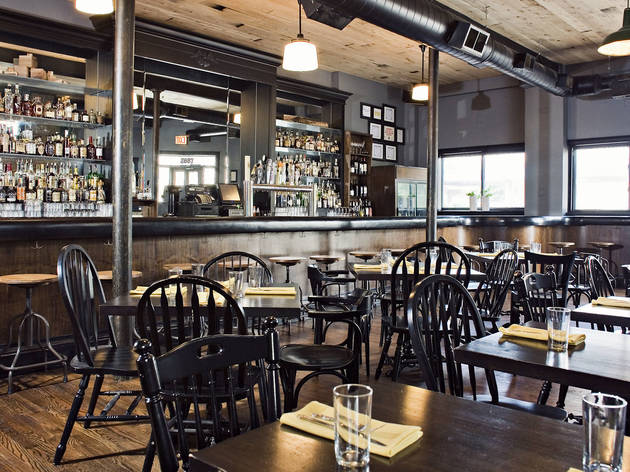 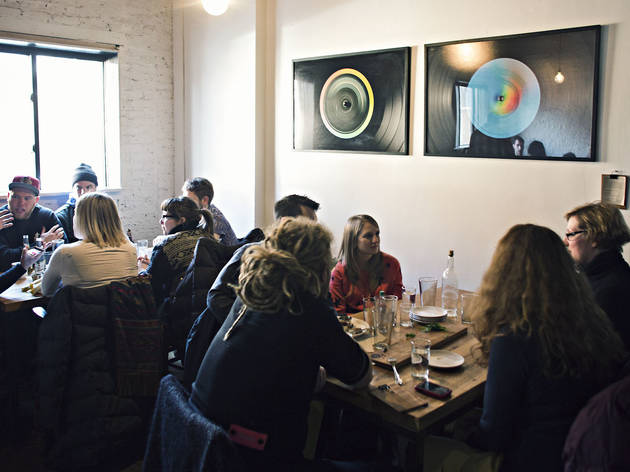 At Longman & Eagle, there are old fashioneds, stirred slowly and carefully behind a dark, gorgeous bar. There are dozens of whiskeys for three bucks; the house favorite, Cabin Still, is mellow and gentle. And there are flannel shirts, and mustaches, and Grandma sweaters. A lot of them. But if you’ve gotten it into your head that eating at a restaurant owned in part by the Empty Bottle guys means that you’ll be systematically ignored by a waitstaff of smelly, aloof, strategically scruffed dudes and the waifish, Lycra-clad women who dig them, then you have seriously underestimated the genre.

Truth is, the folks working here are some of the friendliest and most professional hipsters you’ll ever meet, and their graciousness isn’t lost on the neighborhood. Why else would I have been seated next to couples with babies and families with tweens? Yet, however welcoming and well-informed my server was, T.G.I. Friday’s this is not, and it was hard not to notice that those groups were ordering their fair share of burgers. And, not to start things off on the wrong foot, but the Kobe burger, like most Kobe burgers I’ve had, is nothing to get excited about. The meat’s mushy, the bun’s too big for the patty, and mine reeked of smoke from the bacon, despite the fact that the strips were scarcely cooked. (If those tweens were ordering it simply for the awesome beef fat–fried fries, though, bless their hearts.)

To do this restaurant right, you’ve got to allow yourself organ meats. Get the beef-tongue hash, a dish that turns a quizzically textured cut into something alternately fatty and crisp, then sets a perfectly fried duck egg on top of it. Then, for a break, order a vegetable. I recommend the cauliflower, slow-roasted until it’s easily cut with a fork, nestled with delicate lentils and plump golden raisins. Lentils, you may ask? Not pork belly? You’ll thank me when you still have room for the ultra-rich banana-chocolate bread pudding.

Still, to love this place as much as I do, and to go back as often as I plan to, is to nevertheless hope that the very talented chef, Jared Wentworth, tones it down a little. Serving a brandade so deeply and wonderfully expressive of salt cod with equally salty potato chips (however delicious they are) is too much. Might I be so bold as to suggest stealing the toasted brioche that is unnecessarily beneath the perfectly fried clam bellies and using that instead?

You’ve also got to hope the kitchen’s paying attention, because there’s nothing quite so satisfying as spreading pure, fatty bone marrow on grilled toast, then sprinkling it with flakes of sea salt and spright onion jam—and nothing quite as disturbing as the sight of stiff, pink, undercooked marrow. Ditto for devouring bite after bite of juicy chicken, then discovering the other piece was depressingly dry. At practically any other restaurant, those dishes would have had me headed for the door. But soon after they arrived came the textbook crème brûlée and the teeniest jar of sour-plum jam. Then there was the unfailingly reasonable check, endearing, nostalgic, peanut-butter Mary Jane candies presented along with it. And then there I was, seamlessly moving from table to bar, not wanting to leave at all.