One of the most significant Zagreb art exhibitions of 2015 is one that you’ve already missed. Entitled ‘Wishing You Some Happy Other New Year’, it was held for just three days in April at the Lotrščak Tower, a landmark more famous as the place where a booming cannon is fired every day at noon. The exhibition invited 24 artists to contribute drawings and graphics to be published in an unorthodox calendar that ran from May to April – beyond which there was no guiding theme. The artists chosen (mostly Croatian but also including a few names from the wider region) were largely people who had made their names in figurative painting, street art or commercial design rather than in the more refined, conceptual world of the established galleries.

Among those exhibiting were Zlatan Vehabović, currently one of Croatia’s most celebrated figurative painters, Stipan Tadić, arguably the leading figurative painter of the younger generation, Miron Milić, a graphic designer and street mural painter, Lonac, a graffiti artist and muralist, and Booboo Tannenbaum, a commercial illustrator whose faux-naïf, child’s-play drawings can be seen adorning the walls of several popular cafés and bistros throughout the city. It was as if all the stars of the figurative, non-establishment and street-art world had been gathered in one place.

Of all these artists, it is Stipan Tadić who is currently the most visible, and the most hyperactive. He was exhibiting his new comic book Parisian Nightmares in the Lauba Gallery in November, covering the walls of the Student Centre Gallery with an autobiographical mural in January, and painting street murals in Moscow in March, as well as attending to his long list of commissions for private clients. He’s also a much in demand artist-in-residence, working in Dubai in 2014 and in St Petersburg earlier this year.

Indeed, he is so frequently on the road that Time Out had to catch up with him via Skype, while he attended another international artists’ residence in Belgium. ‘I don’t know exactly where I am,’ he began, ‘except that it’s somewhere near Maastricht’.

As a highly regarded, academically trained artist, Tadić typifies the new mood in Croatian figurative art by treating popular culture, comic strips and street murals with the same seriousness as his more traditional easel-and-canvas activities.  During his show at the Student Centre Gallery, the public could watch as he covered the walls by illustrating his entire life story so far in narrative comic-strip style. ‘The comic strip is a form that fits me very well,’ he said. ‘I wasn’t really an avid comics reader as a child and moved into it relatively recently. But the more sophisticated artists’ comic books are a really good way of expressing the feelings of the artist. When you read a book by Robert Crumb – the legendary American comic artist responsible for Fritz the Cat – you can see through him and understand him. It's the essential sincerity of these books that I like. Once I started to do comics, I really lost interested in what we call ‘art’ and started to be interested in other stuff. It may be kitsch but I don’t really care.’ 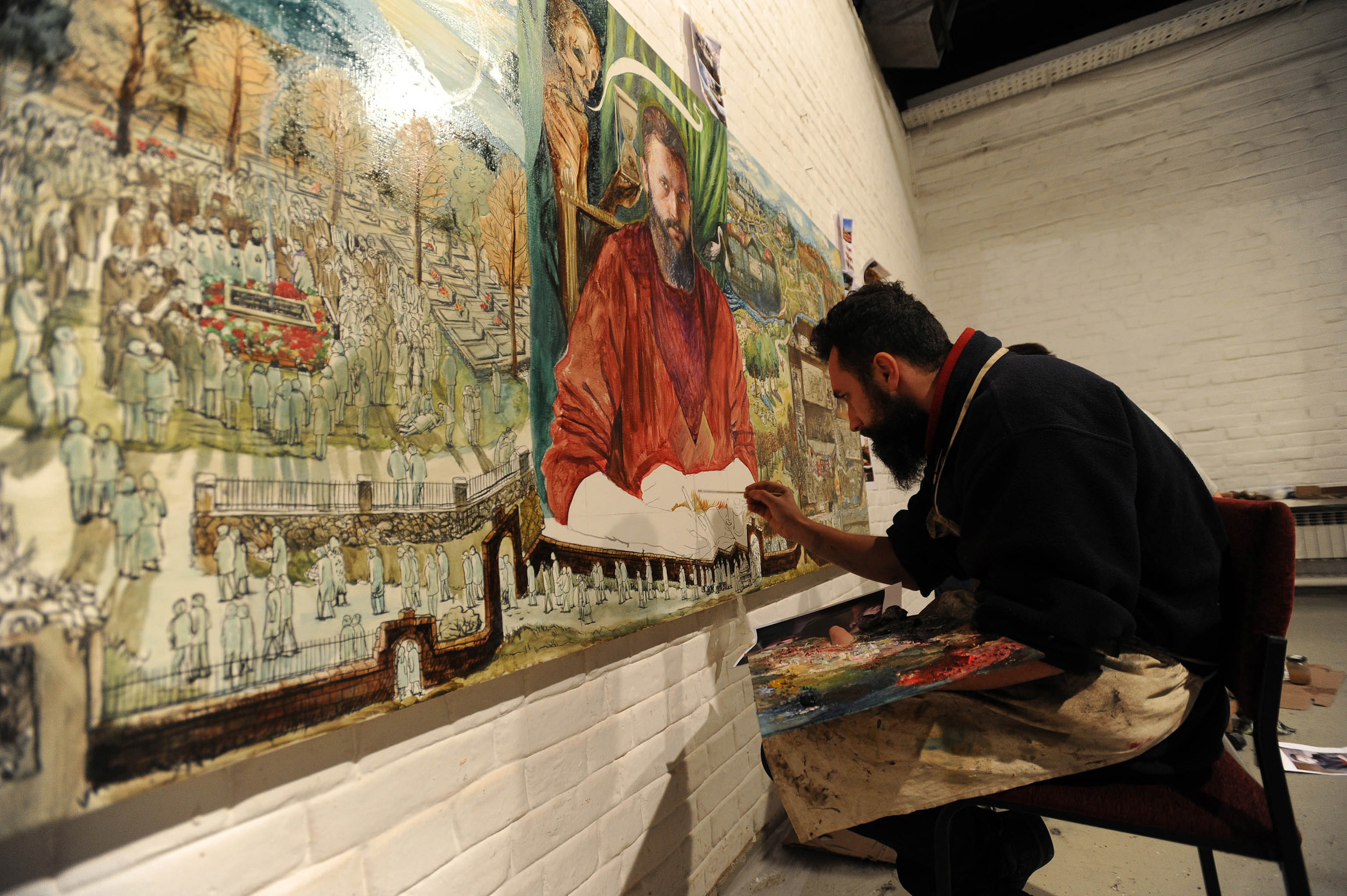 Tadić first came to public attention with the monumental figurative canvases he exhibited soon after graduating. They included portraits of family and friends, and large-format scenes of banal, everyday or imagined events, each of which seemed to recall Gustave Courbet in their ironic send-up of the 19th-century tradition of grand, inspirational history paintings.

I asked him why good old-fashioned figurative painting appealed to him more than the Croatian contemporary canon of ironic, conceptual and intellectual art. ‘It’s because I felt tired of all those things the modernist professors teach us and I wanted the freedom to paint what I want. We spent one to two years painting and were then told to find our own style. I just wanted to have no style and to be left alone to paint.’

‘Figurative painting, especially portraiture, deserves a place in contemporary art just as much as anything else,’ he continued. According to Tadić, portraiture in particular has been marginalised, and treated as a leftover of a past culture that is no longer relevant. ‘I wanted to save portraiture from this fate. My enthusiasm for portraiture is another reaction against the way we were taught at the academy.’

Tadić marked the end of his studies by producing a huge canvas that showed row after row of his fellow students assembled in the Croatian National Theatre. It was a deliberate attempt to subvert the camp formality of the graduation ceremony by picturing it taking place it in such an august temple of culture. ‘I wanted to somehow make fun of the aristocratic pretentions of the academic world, to show it up as some kind of 18th-century kitsch,’ he said.

One of his most famous paintings shows controversial mayor of Zagreb Milan Bandić clad in 17th-century armour, sitting on a white horse. It was a commission he received through his father’s political contacts. ‘I didn’t want to do it at first because I didn’t want to do anything connected with politics, but I found a way of painting the portrait while keeping myself clean. It’s a homage to what I admire in the history of art, Goya or Velázquez, for example. It’s an attempt to satisfy Milan Bandić but to satisfy ‘my people’ too.

Many artists of Tadić’s generation were attracted to street art as a way of escaping from the world of the gallery show and addressing a different audience. ‘I know a lot of graffiti artists through Medika, the semi-official anarchist squat with a concert venue and independent cultural spaces. I like their way of doing things. It’s an anonymous act, done in order to win a certain respect rather than try and be famous. The whole world of graffiti, comic books, tattoos, skate culture; this is the kind of art world in which I feel most at home.’

Indeed, it is in Medika that Tadić has his own studio. ‘I was always connected with the alternative side of culture and I’m really glad that I have ended up in the centre of it. In a squat. The world of Medika and its people is not really present in my paintings and it would be nice if it appeared in my work more often. It is not a scene that is going to last forever.’