Simon Mavin of the Melbourne self-described ‘multi-dimensional, polyrhythmic gangster shit’ outfit talks to us about owl-jamming, amongst other things ahead of their gig at Dimensions Festival

There’s a more eclectic, more experimental, jazzier sort of sound that has broken through R&B in recent years, like Flying Lotus and Thundercat; then there’s the Banks, FKA Twigs, Frank Ocean, How To Dress Well, Miguel etc. fronted movement of alternative, commercial avant garde R&B; and then there’s the dynamic sensibility of Australian neo-soul quartet Hiatus Kaiyote with their critically-acclaimed albums (earning rave reviews from Erykah Badu, Prince and Questlove), their 2013 Grammy nod (thanks to their track ‘Nakamarra’ featuring A Tribe called Quest legend Q-Tip), and their signing with Salaam Remi, who served as the executive producer for sophomore album ‘Choose Your Weapon’.

We say ‘neo-soul’, but truth be told, Hiatus Kaiyote seamlessly switches between the blend of jazz and swing, to abstract hip hop, soul vocals, to electronic flourishes; 2015’s ‘Choose Your Weapon’ is worldly and wonderful, taking influences from latin, samba, and West African funk. It’s a dense, ever-shifting soundscape – as soon as the album appears to settle on a groove, it just as quickly ups and leaves it – that introduces an aural bloom before traversing along gritty basslines, synths, and progressive riffs over a colourful, wide canvas, paced by intros and interludes. Tip: standout tracks include FlyLo-inspired ‘Borderline With My Atoms’, extended intro (‘Creations Part One’) and all, ‘Breathing Underwater’, and ‘Fingerprints’. Ahead of the band’s debut gig in KL this September, we speak to Simon Mavin about their latest genre-defying album, making friends with owls, and what to expect from their show. 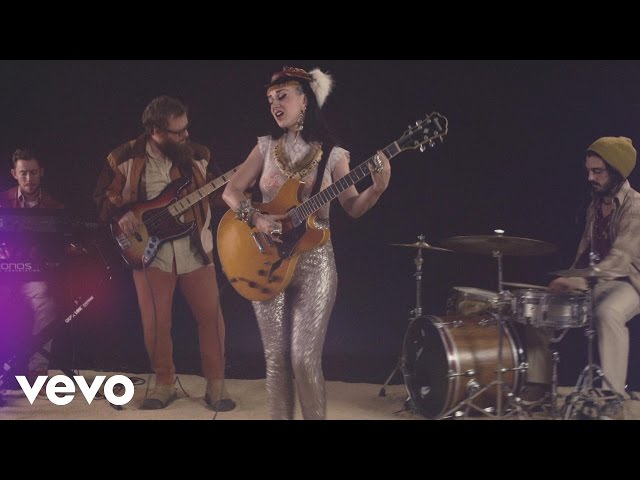 How has Hiatus Kaiyote grown since 2013’s ‘Tawk Tomahawk’ – what are some of the differences we can expect from ‘Choose Your Weapon’, and what was the writing process like, especially following the Grammy nomination for ‘Nakamarra’?
Every song that’s on the record goes through a really different writing process. Some of the songs Nai (Palm, vocalist and guitarist) had written a long time ago when she was 16, 17 years old, and some of them we wrote in the studio last minute, this year or last year. ‘Fingerprints’ was one that Nai wrote when she was really young; ‘Prince Minikid’ was one that I kind of put together. We got creative with it in the studio. I guess every track has got its own personality. ‘Swamp Thing’ was one of which a majority was recorded live; we recorded the bass, drums, piano in the studio live, and then we recorded vocals and a few other things at a later time. ‘By Fire’ is one we wrote together.

Was there a great deal of pressure going back to the studio? You were the first Australian band to be nominated for a Grammy in an R&B category.
Not really, we don’t really see ourselves as an R&B band, you know? We see ourselves as a band that can go in any direction, so with that in mind there wasn’t any pressure to sort of be good at any genre, you can just sort of do whatever you want. The pressure came from us to do the best that we can: Four people working on a project together; in a collaboration you’re always trying to get the best out of each other and try to get the best out of yourselves. You’re trying to please the other people in the band, that’s the hardest thing, rather than trying to please anyone else.

You’re also publicly praised by people like Animal Collective, Erykah Badu, Prince, Questlove – does that add to the pressure as well, or do you enjoy the recognition?
We’ve met them a couple of times. They’re lovely, lovely people so there’s no pressure at all.

‘Choose Your Weapon’ is intro- and interlude-heavy. Interludes are of course an R&B tradition, reaching back to people like Barry White, Bobby Womack… but between songs, do interludes just fall upon deaf ears? Are fans genuinely interested in interludes?
It’s a journey, we were definitely thriving on this journey and the whole band really enjoys the record, and you know, it’s a really long record, 18 tracks. On the last day that we had before we had to hand the record to the label, [we realised] a lot of the short interludes on the album made the record flow. They really help in shaping the narrative of the album; going from track to track didn’t really work so we had to have these smaller things in between tracks to make the record flow. I don’t know, I like that part of the album, these short little tracks.

Do you think you’ve settled on a sound yet?
That’s the thing, we haven’t really settled on a sound, it’s so universal. We have a thought process: ‘Let’s write about what moves you’, or anything like that, if someone else reacts to that, then it works. Genre is something you have on your iPod.

Let’s talk about that owl jam you guys have on the record, ‘Only Time All The Time: Making Friends With A Studio Owl’. I have so many questions: was it an actual owl, was the owl in the studio room with you, what was its name?
[Laughs] We actually booked a recording studio and there was an owl that would come and visit on a tree. We had a recorder, we recorded the owl, so yes, it was a real owl. There are all sorts of animals throughout the record, there are dogs, there are cats, there are birds. We recorded a lot of birds. There’s a lot of that stuff going on.

Are you guys all fans of birds?
[Laughs] Everyone else loves birds but I hate them.

What can we expect from your KL show?
You can expect lots of birds.

‘Choose Your Weapon’ is out now. www.hiatuskaiyote.com