Croatia offers some of the most spectacular road trips in Europe. Here are five brilliant suggestions

Running from Rijeka on the Kvarner Gulf to Karasovići on the border with Montenegro, Croatia’s Jadranska magistrala or Adriatic Highway offers one of Europe’s most unforgettable journeys. Whether weaving its way round deeply indented bays or skirting scree-covered mountains, there’s scarcely a single boring kilometre in its 650km length. The magistrala may frequently set your stomach a-churn with its endless twists and turns, but the views it offers are unforgettable, with the Adriatic’s famously stark islands parading in stately procession before your eyes.

Travelling along the magistrala used to be a severe test of holiday season nerves, with its columns of caravans, straggling towns with speed restrictions, and enough blind corners to make overtaking a near impossibility. With Croatia’s still growing motorway network now taking the pressure off much of the magistrala, the route is re-discovering its reputation as one of Europe’s greatest coastal odysseys.

We’ve chosen two large chunks of the magistrala for our list of Croatian road trips listed below, followed by three more recommendations for exhilarating and rewarding drives.

For twists, turns and superb maritime views, there are few roads in Europe that can match the magistrala, especially in this northern stretch. A sense of the otherworldly sets in early, with the hypnotically bleak and tawny island of Krk dominating the western horizon.

The huddled town of Senj with its knoll-top Nehaj fortress provides a good place to take a breather before embarking on one of the magistrala’s most challenging stretches, with 60km or more of bends and curves taking you beneath the rocky flanks of the Velebit range. Those in need of a short waterside detour should descend to the port of Jablanac, where you can park up before investigating the dazzlingly beautiful Zavratnica cove. Marking the southeastern end of the Velebit mountains is the Paklenica National Park, with a choice of uphill hiking routes providing an excuse to stretch your legs.

For a beach-combing alternative press on across the Maslenica bridge and take a detour north to Nin, where a famously long and sandy beach comes with views back towards the rugged coast you’ve just driven along. Zadar, and its famous sunsets, are just half an hour’s drive further on.

Escaping from the urban sprawl of Split, the magistrala forges southeast through a string of settlements famed for their pansions and pebbly strands. The beach at Duće is the best of the lot, its fine dark shingle resembling a bed of brown sugar. Twisted gnarled mountains hover above Omiš, the first signs of a grizzled mountain chain that hovers menacingly above the road for the next 75km. From here the landscape is the stuff of superlatives, with scree slopes and rocks on one side and graceful silhouettes of Hvar and the Pelješac peninsula looming out to sea. The sweeping pebble beaches of the Makarska Riviera are busy with bathers in summer; the twin strands at Drvenik are slightly less commercialized than the rest and are great places from which to observe the Drvenik-Sućuraj ferry sashaying gracefully out into the blue.

The mountains end suddenly to be replaced by a broad delta of orchard-land reclaimed from the Neretva swamps. Providing the excuse for an inland detour is the award-winning Museum of Narona, a modern pavilion built above a 2nd-century Roman colony. The road runs through a short coastal strip belonging to Bosnia-Herzegovina (keep your passports handy) before pressing onwards to Dubrovnik, offering extraordinary views of knobbly south-Dalmatian islands on the way. Arrival in Dubrovnik itself is spectacular, with the road crossing the Franjo Tuđman suspension bridge across the fjord-like Ombla valley.

If you’re aiming to get to Split from the Croatian capital then the quickest and most obvious route is via the A1 motorway. It’s an exhilarating ride through stunning scenery, but it’s also just a motorway: great if you’re addicted to the anti-glamour of service stations and picnic lay-bys, but otherwise a bit of a slog.

A much better road-trip alternative is to follow the old road from Zagreb to Split, which winds its way memorably over the Croatian hills rather than simply tunnelling through them. Stop-offs en route add up to a crash-course in Croatian landscape and history, beginning with the town of Karlovac and its freshwater aquarium and lively riverside scene. Heading south and uphill along national route 1, the road winds its way through a mixture of woodland and hillside pasture. The going can be slow, especially in summer, but there are plenty of roadside restaurants selling spit-roast meats and other traditional journey-breakers if its near lunchtime and you’re getting impatient.

Next major attraction is Slunj with its cascading cataracts, watermills and restaurants selling fresh trout. From here it’s only a short drive to the grandiose scenery of the Plitvice National Park, whose celebrated lakes, waterfalls and boardwalk trails fully justify a stopover of 3-4 hours. Whether you have any more time for detours as the road forges across the bewitchingly arid terrain of the Adriatic interior is up to you. Suffice to say that the medieval fortress at Knin is another of those things that would be a real shame to miss. 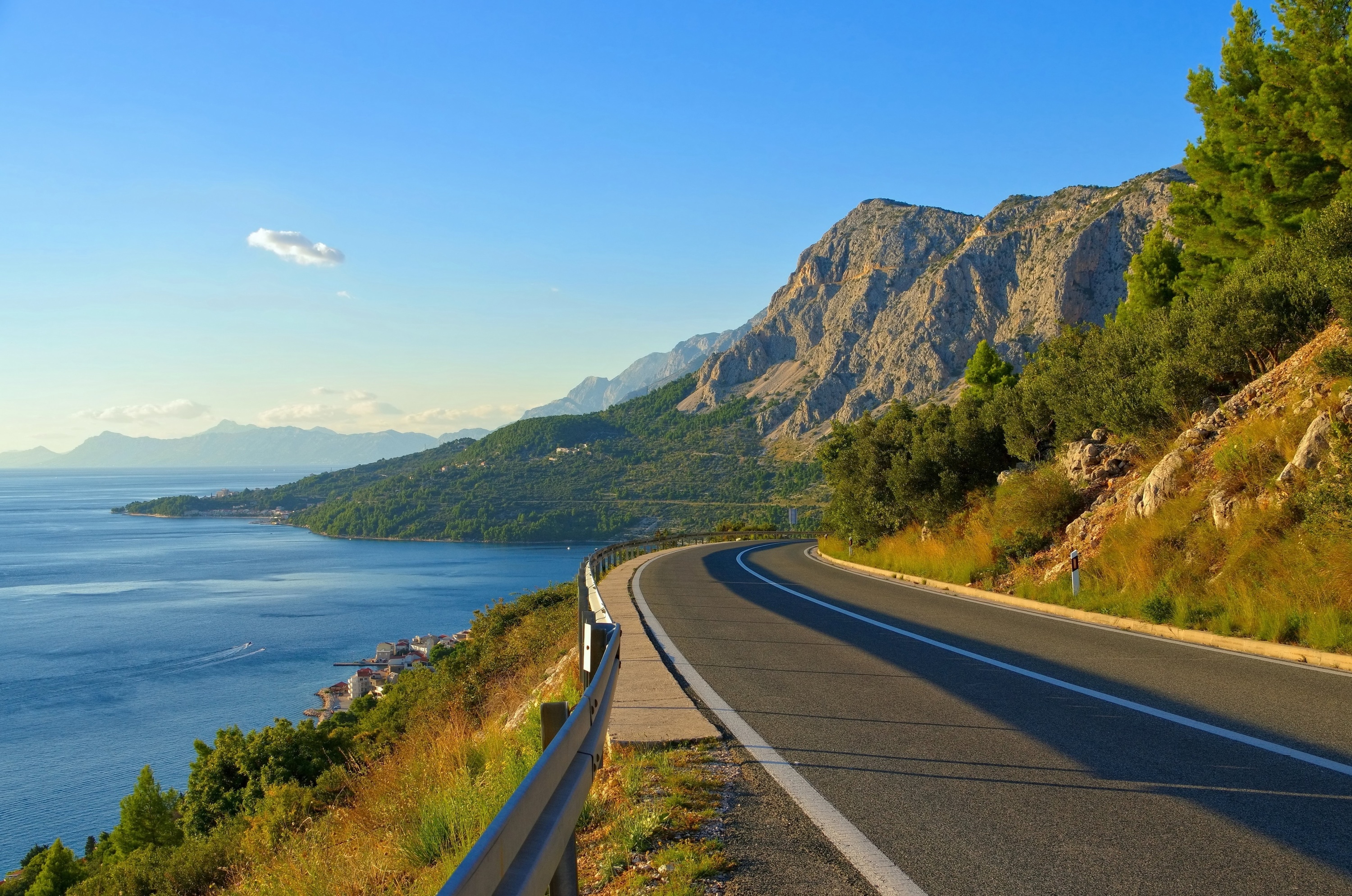 Taking a car to the Croatian islands can be expensive, and there’s not always much in the way of road to travel once you get there. One classic Dalmatian journey that might almost count as an island is provided by the Pelješac peninsula, the rugged finger of land that juts into the Adriatic to the north of Dubrovnik. Be warned however that the peninsula is so famous for its food and drink that there is a constant danger of being waylaid en route. This is a relatively short road trip in terms of kilometrage and should allow you plenty of time to enjoy the fat of the land.

The trail begins in Ston, a historic town of two halves which is joined together by one of the longest surviving defensive walls in Europe. Ston is also famous for its oysters, served up with panache by several harbourside restaurants. From here the ridge-hugging route 414 climbs through vineyards and maquis, with splendid views of the mainland (to the north) and the island of Mljet (to the south) opening up on either side.

If you’re in need of a bit of beach-rest then consider a side-trip to Žuljana, a cove-hugging fishing village reached by a windy road. Back on the 414, the route winds its way through Potomje, a village famous for the profusion of wine cellars offering the chance to taste the peninsula’s famously velvety Mali plavac red. The road descends dramatically towards Orebić, a historic port famous for its sweeping shingle beaches. The route continues along Pelješac’s southern shore offering fine views of the nearby island of Korčula before climbing up onto wild, heath-covered uplands on the shoulder of Mount Sveti Ilija. The climax of the drive is the dreamy descent into Lovište, a beautifully calm bay-side settlement shrouded in greenery.

A lot of people journey into the heartlands of southeastern Croatia via the long straight Zagreb-Belgrade motorway, a drive that offers little except a mild sensation of boredom. You really need to swerve away from this route in order to enjoy the countryside at its captivating best. Frequently caricatured as being flat and featureless, the Croatian southeast is, in fact, an undulating patchwork of cornfields, vineyards, forests and snoozy villages. Your best bet for a Slavonian road trip is to leave the autocesta (motorway) at Slavonski Brod and head for the charming Baroque town of Požega, from where a minor road runs southeast along the low-lying limbs of wooded Papuk mountain. Passing through lush green tobacco plantations and villages draped in chains of drying red peppers, the road drops down into the Drava basin at Našice, where the English-style park of the Pejačević mansion is a great place for a breather.

Continuing southeast towards regional capital Osijek and its stupendous Habsburg-military quarter, the road passes the outdoor swimming pools of Bizovačke Toplice, a fantastic place for a refreshing summer dip. Beyond Osijek, things get even more intriguing, with the road passing through the lush vineyards of Srijem before arriving at the previously war-scarred, but nowadays gorgeously restored town of Vuko- var. Laze beside the river or sunbathe on sandy Ada island before pressing on to Ilok, last town on the Croatian side of the border, with its wine cellars and hilltop castle. Head for the Hotel Dunav on the Danube shore for a slap-up cauldron of fiš paprika, the fiery fish stew for which the region is famed.