Šibenik is full of surprises. Around its attractive Old Town, historic churches and atmospheric squares are tucked around almost every corner, the golden globe atop the unmissable Cathedral of St James popping up in the distance when least expected.

The busy seafront Riva, lined with bars and restaurants, is overlooked by the ancient network of crumbling fortresses atop the city, guarding the entrance to the Krka estuary that leads to the town from the sea. Founded on Christmas Day in 1066 by King Petar Krešimir IV, Šibenik is one of few coastal towns with a Croatian rather than Greco-Roman heritage.

However, it was the long period of Venetian rule that left the deepest imprint, and most buildings in the centre, including the Cathedral of St James, date from this era. Giorgio da Sebenico, Niccolò di Giovanni Fiorentino and Fausto Veranzio are just some of the renowned figures whose works can still be admired today. Šibenik even had its own to mint, producing a local currency, the šibenski bagatin.

Šibenik is also a good base from which to explore the Krka National Park, Etnoland discovery park, Dubrava Sokolarski Center for Falconry, and nightspots in Vodice and Primošten.

This article is sponsored by Šibenik and The Croatian National Tourism Board: 'Croatia Full of Life.

Incredible things to do in Šibenik 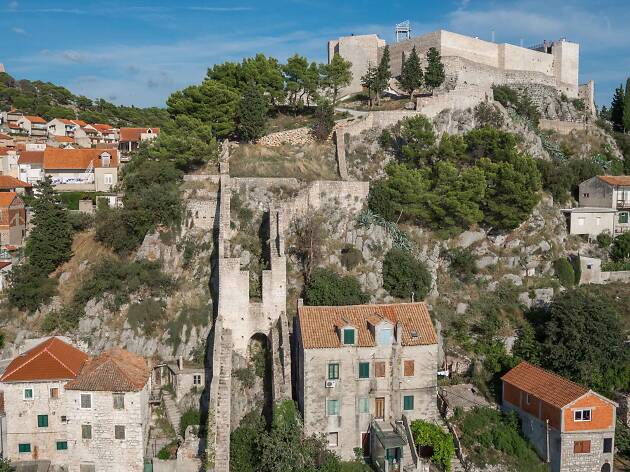 For centuries, Croatians up and down the coast, and over on the islands, lived in fear of invasion from the Ottomans, who dominated the Balkan hinterland. Šibenik was defended by four fortresses, the most formidable being St Nicholas, Tvrđava Sv Nikole, which guards the narrow channel into the city from its vantage point on the islet of Ljuljevac. It was here, about half a century before the decisive sea battle of Lepanto of 1571, that locals begged their Venetian rulers to construct a fortification so impregnable no Turk would dream of coming near it. Having to clear a whole monastery, St Nicholas, to do so, the Venetians carried out the request to the letter, creating a citadel across the whole island. Never tested from that day to this, St Nicholas is a prime example of defensive architecture, one of six built by Venice recently designated as a collective UNESCO World Heritage Site.

At the top of a steeply stepped street emerges at St Michael’s Fortress, connected to the patron saint of Šibenik. No-one can fail to be impressed by the view here, across the estuary to the surrounding islands. Its summer stage is the atmospheric setting for acts as diverse as Bryan Ferry, Róisín Murphy, Mario Gus Gus, Morcheeba, The National, Nouvelle Vague and Thievery Corporation - winning it the title of Croatian cultural attraction of the year in 2016.

Renovated and reopened with a spectacular light show in 2016, Fort Barone was originally built in double-quick time during fears of Turkish invasion in the mid 1600s. The era is now captured and dramatised as part of the augmented reality system that walks visitors through the design, military planning and architecture of the day. Hiring AR glasses from the ticket office, you can let a local historian and an eye-witness account reveal what life was like under Ottoman siege, as was the case in 1646. The fortress now also features the Barone Bistro, a panoramic café-eaterie that puts local fare and wines to the fore, inventive seafood and meaty nibbles complemented by the lesser-known labels of regional wine producers. 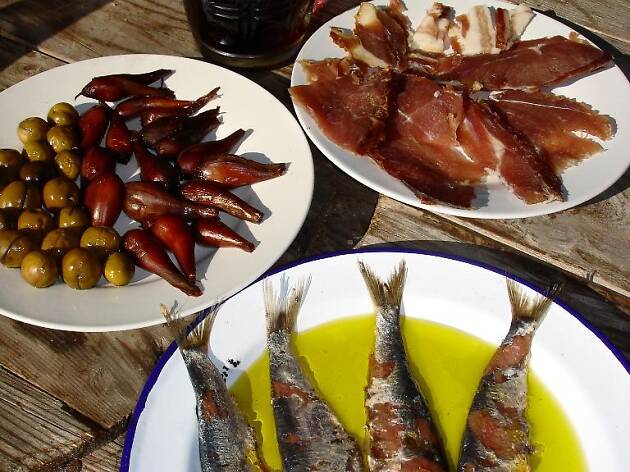 Although a crop of trendy restaurants are doing creative things with modern gastronomy, Šibenik and its food hubs of Drniš, Knin and Skradin boast centuries of food heritage. You’ll find tables overflowing with prosciutto, crisp white maraština and barrel aged Babić wine and sir iz mišine (sheep’s cheese.) Peka is the traditional Dalmatian method of slow-cooking lamb, octopus and pork ‘under the bell’. The meat is roasted for several hours in a metal dome, usually cooked outdoors on a wood-fired oven. Don’t forget to splash some prošek into your glass with dessert, whilst you nibble on fresh figs or Skradin cake. Wash it down with an strong digestiv of homemade brandy (rakija), the Šibenik hinterland is brimming with the stuff. 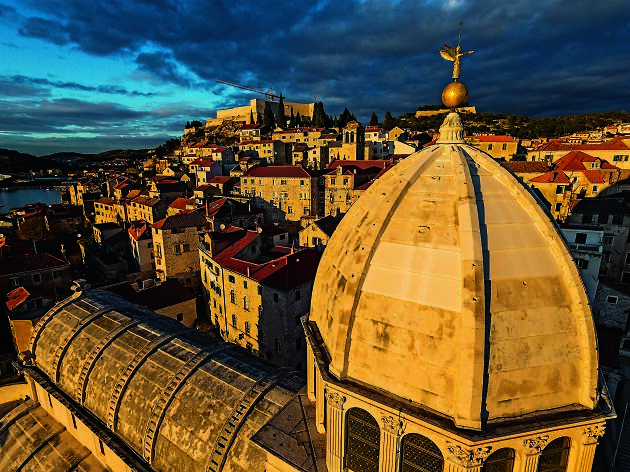 The historic centre of Šibenik has 24 churches, though the most precious of this rich sacral heritage is undoubtedly the Cathedral of St James.

St James is an exquisite example of Gothic Renaissance craftsmanship. Created from fine white limestone and marble from Brač, this UNESCO World Heritage site, a basilica of three naves, a signature dome but no tower, is mainly the work of two architects who required 100 years to build it. Juraj Dalmatinac, aka Giorgio da Sebenico, whose statue stands on a tall column outside the main entrance, was originally commissioned to craft a Renaissance jewel from a hotly debated Gothic model. Before his death in 1473, he left behind the main portal, the Lion Gate and the stunning baptistry. Leaving his signature on the north apse, Dalmatinac also created a frieze showing likenesses in stone of the prominent citizens withheld funds and caused decades-long delays to the project. Niccolò di Giovanni Fiorentino completed the master architect’s work, though the signature dome echoes the Florentine roots of this later sculptor. The cathedral still required another 30 years to finish after Fiorentino’s death, and was consecrated in 1555. The Cathedral of St James was then significantly restored in modern times. 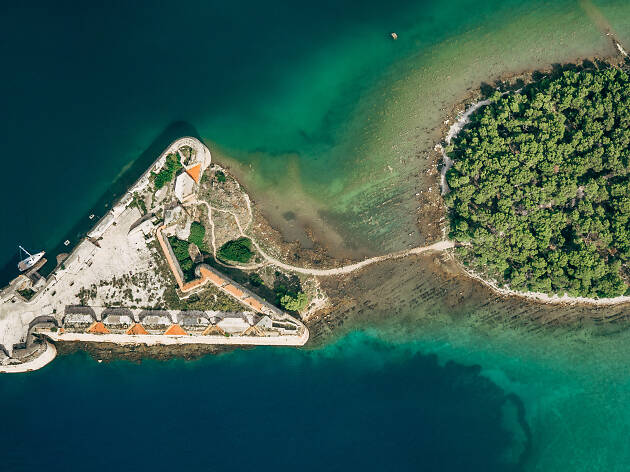 A walking trail alongside St Anthony’s Channel more than four kilometres long leads from St Nicholas Fortress to Panikovac cove. The surrounding pine and oak forests provide the perfect amount of shade for a relaxing day at the beach and your relaxing hike. 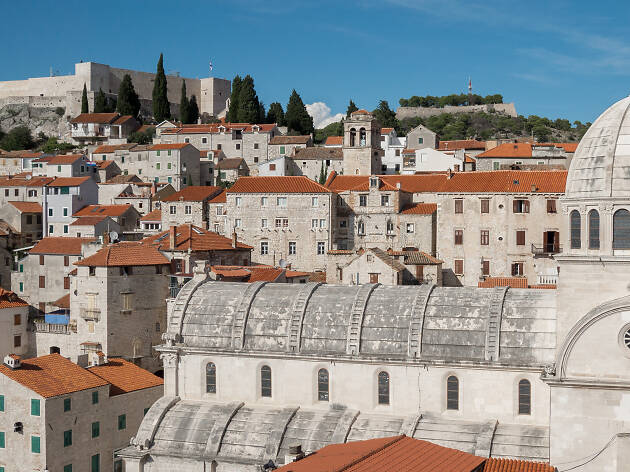 Opened in 2015, the Museum of St Francis is named after the adjoining monastery that dates back to the 1300s, the imposing white building that dominates the far end of Šibenik’s main waterside promenade. It’s the kind of ecclesiastical landmark that would have a fusty old library only open to researchers of medieval history. Here, not a bit of it. Yes, it has a library, a most impressive one, filled with 10,000 volumes, including the priceless Šibenska molitva, one of the first known pieces of text in Croatian and Latin. But the museum also has interactive and audiovisual sections that bring the 700-year history of monastic activity to life, giving the visitor a vivid picture of the simple life serving God in the Middle Ages. Essential documentation has English translation. A lovely landscaped garden completes the picture. 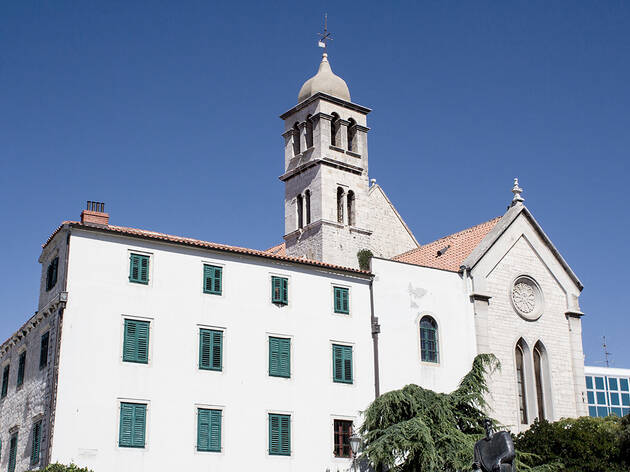 Alongside the Cathedral of St James, facing the Adriatic, the medieval Rector’s Palace was converted into the Šibenik City Museum in 1975, occupying the atrium and south wing. As was the way with museums at that time, this institution is quite old-school – you shouldn’t come here expecting hands-on features and displays that move or light up. However, given the unique nature of Šibenik in relation to its neighbours, settlements built by Greeks, Romans or both, evidence of the local Illyrian and Croatian heritage here offer a different insight than you’ll find in Split or Zadar. For a start, it goes way back, to the Danilian era some 6,000 years ago, around 4,000-4,500BC, named after the village of Danilo close to Šibenik where important discoveries were found in the 1950s. Artefacts here, particuarly ceramics, shed light on just how developed so-called Danilian Culture was, thousands of years before the Romans. Look out, too, for the sparkling medieval jewellery and overview of Šibenik’s development in the 1200s and 1300s. 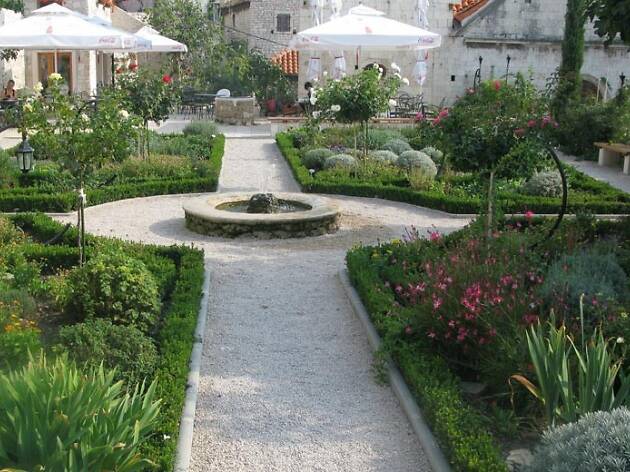 Painstakingly researched and landscaped by award-winning architect Dragutin Kiš, the Medieval Mediterranean Gardens fills a prominent space around the former St Lawrence Monastery, on the edge of Šibenik’s historic centre. The plot had lain unkempt for centuries until landscaping expert Kiš and his team set to work, carefully planting medicinal herbs and plants in the shape of a cross, juxtaposed with the occasional fruit tree for colour. The end result is both practical – it’s also an educational resource, as local schoolchildren are regularly involved in maintaining it – as well as a relaxing tourist attraction, visitors following the pathways or spending a quiet ten minutes enjoying the peace and greenery on the patio. It operates year-round, hosting open-air events in summer.