Zagreb's Christmas extravaganza Advent has transformed the tourist trade in the Croatian capital, with record visitor numbers expected in 2018

Many European capitals now go big on Christmas markets. Stalls are set up around a downtown square, a little yuletide decoration draped in place and seasonal music piped over the speakers.

Not so Zagreb. Seizing the opportunity to lure tourists here for one major attraction over the course of the year, the powers that be have created the award-winning Advent in Zagreb, an annual extravaganza that takes over the city centre from December 1 until early January.

Seeing off the competition from nearby Budapest and Ljubljana, beating Vienna on price, Zagreb has found itself the perfect niche. Central European but laid-back about it, the Croatian capital pulls out all the stops to keep visitors entertained for days at a time.

Naturally, there are the yuletide cabins and seasonal stalls, ranged around the statue of Ban Jelačić on the main square, down the nearby streets of Gajeva, Bogovićeva, Varšavska, Petrićeva and beyond, proferring sausages, mulled wine, roast chestnuts and hand-crafted gifts.

But that’s only the tip of the iceberg.

Alongside on Europski trg, you find stalls and more, with live bands and film screenings providing regular entertainment through December.

On the slopes of the Upper Town, overlooking the city below, jazz acts play beside the Lotrščak Tower, and DJs spin on adjoining Strossmayerovo šetalište, a family-friendly promenade with activities for kids also scheduled.

Accessed through the illuminated, tree-lined tunnel of Marićev prolaz, the Lower Town on the other side of the main square is where crowds flock night after night. Along the length of the Green Horseshoe, the string of urban parkland squares created by Milan Lenuci in the 1880s, hundreds of events are staged over the course of a month or more. Starting at Zrinjevac, where trumpeters blast out Christmas tunes on the balconies of ornate stately buildings and a decorated music pavilion comes into its own as a concert stage, the throng drifts down to Trg Strossmayera for more live music. Here performances are more spontaneous, the entertainment less mainstream, a daily stream of original performances collectively known as Fuliranje, which loosely translates as Fooling Around. 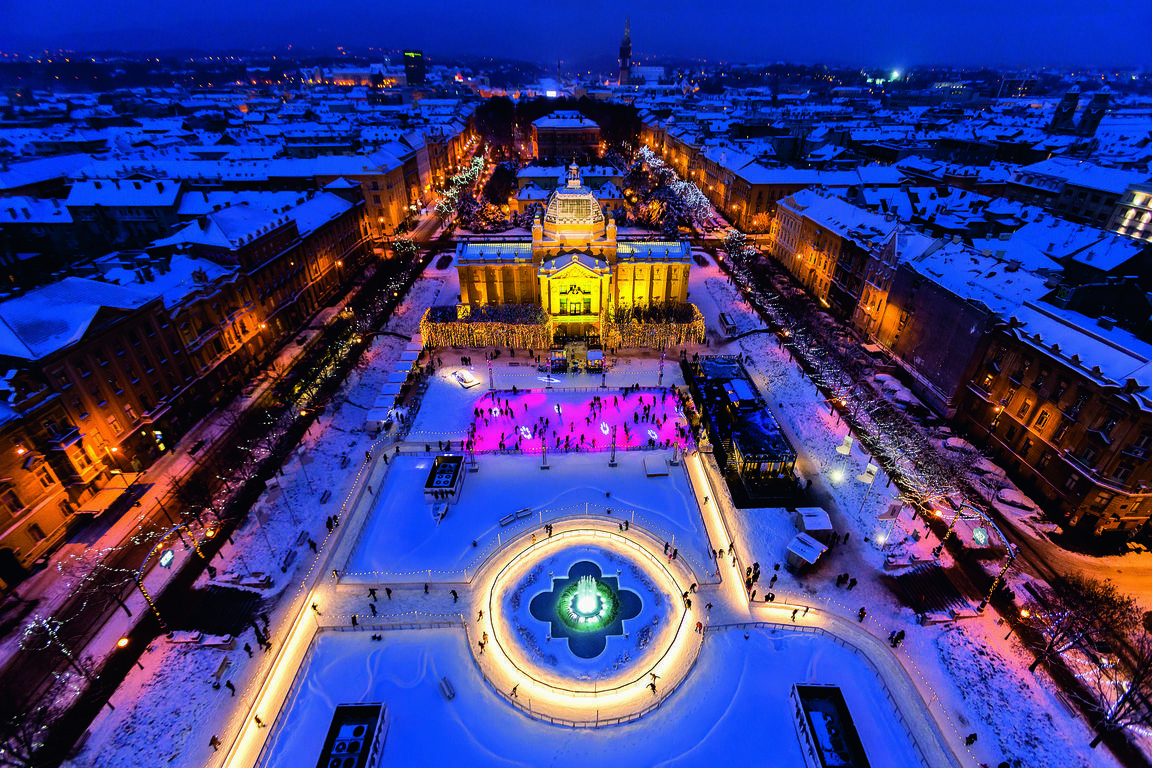 On the next square over, Trg Tomislava, beckon the bright lights of the expansive alfresco skating rink, the jewel in the crown of Zagreb’s Advent extravaganza. Backdropped by the equally stunning, Habsburg-era Art Pavilion, also lit up for the occasion, couples, children and groups of friends glide by as DJs and live bands provide musical accompaniment. Skating sessions start at 10am and run until 11pm, except on Christmas Eve and New Year’s Eve. Admission is a modest 10kn-15kn, children under six can join in for free, and skate hire is 20kn.

Some Zagreb hotels offer special Advent deals during the event, even free taxi transfers to and from the seasonal celebrations. With nearly 200,000 overnight stays recorded in the Croatian capital for the month of December 2017, Advent in Zagreb 2018 is bound to raise the bar higher in terms of scope, locations and entertainment.