Travelling to Mljet, Croatia? Our local experts guide you through the island

Mljet is the nearest thing to having your own island. Dalmatia’s most southernly, most verdant and, some would argue, most beautiful destination is mainly pine forest, bisected by a single road.

Before President Tito chose Brijuni in Istria as his place for leisure, luxury and safari animals, Mljet was a prime candidate for the prestigious role. And though it never got to see zebras, elephants and giraffes, Mljet remained a natural escape, underdeveloped and underpopulated.

You can wander around for a morning and see few signs of life but the odd mongoose, creatures that roam free here after being brought in to rid Mljet of snakes. The western third of the island has National Park status and paid entry, the main ticket office at Goveđari, halfway between the island’s main entry points of Polače and Pomena.

Within the National Park are two saltwater lakes, Veliko and Malo Jezero, with the Church of St Mary and a 12th-century monastery on an islet in the middle.

According to legend, Odysseus was so enchanted by Mljet that he stayed here for seven years. Locals tend to stay for the day, arriving in someone’s boat in the morning, spending the day cycling and swimming, before heading back for dinner in Dubrovnik.

Tourists coming with the ferry are plonked at sombre Sobra, on the north-east coast. Those in the catamaran go on to the western tip and Polače, named after mildly interesting Roman ruins. This is your best arrival point, with private rooms and cycle hire (although there’s a steep hill to start off with). It is 5km to the new port of Pomena, where you’ll find the island’s longest-established hotel, the Odisej Mljet, plus more private rooms, cycle hire places and restaurants. The hotel is the island’s link with civilisation, offering a cashpoint and internet access. It closes for the winter.

The National Park is Mljet’s main attraction – apart from pine-scented solitude, that is. As well as the lakes, where everyone entering the park heads first, around them the little stone-house settlements of Babine Kuće and Soline are nice for a wander. From Veliko Jezera, a hiking path leads to the high point of Montokuc, giving wonderful views of Pelješac and Korčula. Hiking maps of the island are sold at kiosks in Polače and Pomena.

Other sports activities such as windsurfing and diving can be organised from the Hotel Odisej Mljet.

The rest of the island contains a few small settlements, centrepieced by the administrative capital of Babino Polje, and nothing else but nature. As nearly all tourists hang around the lakes, this is pretty much yours. There’s nothing by way of transport or refreshments but the reward is three sandy beaches near Sapunara, on Mljet’s far eastern tip. The main one can get a little crowded, but the other two, Podkučića and beautiful Blace, are quieter, the latter attracting nudists. Locals can find you a private room or there is an option of apartment rental.

On the south coast, a difficult walk from Babino Polje or an easily organised boat trip from the Hotel Odisej, is the Ulysses Cave, where the nymph Calypos is said to have held Odysseus captive for seven years. It can only have been the itch that made him leave.

Things to do in Mljet 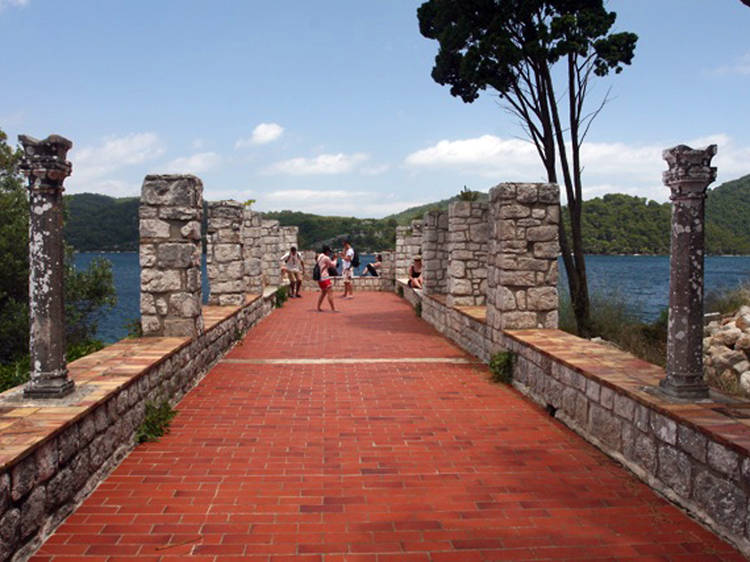 Mljet’s principal attraction is its National Park covering the western third of the island.

From the main ticket office at Pristanište, it’s a short walk to the twin saltwater lakes of Veliko Jezero and Malo Jezero, attached by a channel of water. You can also buy tickets at Polače, Pomena, Vrbovica, Pristanište and Mali most. Veliko Jezero is connected to the Adriatic by the Soline Canal and, like the sea, it has tidal flows. Make sure you know which way the current is going and don’t get swept out. Malo Jezero is ideal for children. There isn’t much of a shore. Take a deep breath and plunge in – the water is quite warm. 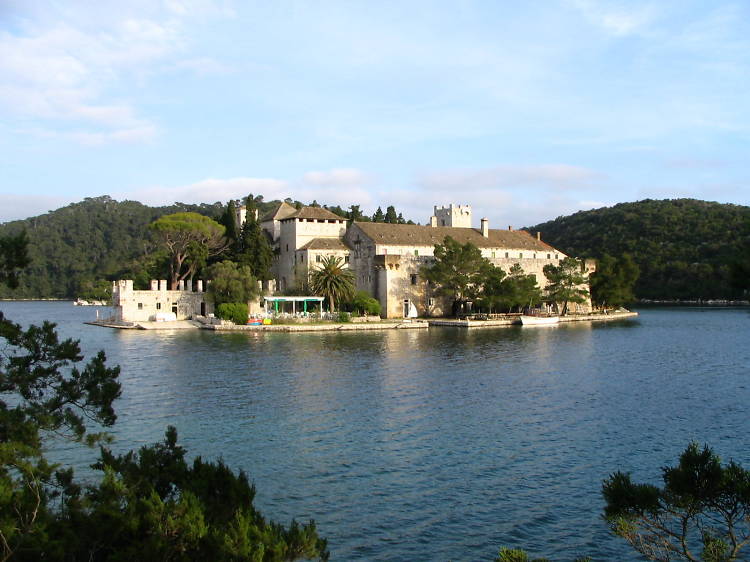 In the centre of Veliko Jezero is the tiny islet of St Mary with the church of the same name and a 12th-century Benedictine Monastery on it. Beneath the church is the former monastery, abandoned in the 19th century and now occupied by a restaurant. The monastery building housed the government offices for forest management until 1941. After World War II it was turned into a hotel, only to be looted and ruined during the Croatian War of Independence. Most visit the monastery islet by a little hourly boat (20kn) that goes from the little bridge on Malo Jezero. You can also hire a small canoe from the same place and row there.