Okay, so the rumours were wrong and this week’s Cannes Film Festival will have to manage without a new David Lynch film. But there’s still a tonne of attention-grabbing new movies premiering over the next fortnight, ranging from the flamboyant (Baz Luhrmann’s Elvis) to the intriguingly niche (Ethan Coen’s Jerry Lee Lewis doc).

It all kicks off with a hoard of zombies, in Michel Hazanavicius’s B-movie homage Final Cut, and ends with a seriously topical immigrant drama set in Paris’s banlieues (Léonor Serraille’s Mother and Son). Here are 12 films on the programme to look out for. 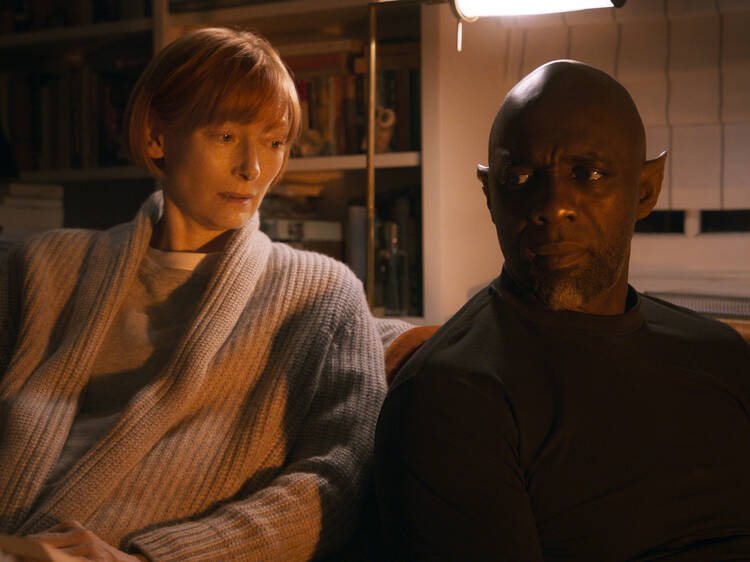 George Miller’s first film since Mad Max: Fury Road is billed as an ‘epic fantasy romance’ and stars Tilda Swinton as a travelling scholar and Idris Elba as a powerful Djinn who grants her three wishes in exchange for his freedom. It may not boast Fury Road’s pulsing action or scale – it’s all set in an Istanbul hotel room – but it sounds intoxicating and we’re still seriously intrigued by the Aussie filmmaker’s first dalliance with the supernatural since The Witches of Eastwick. 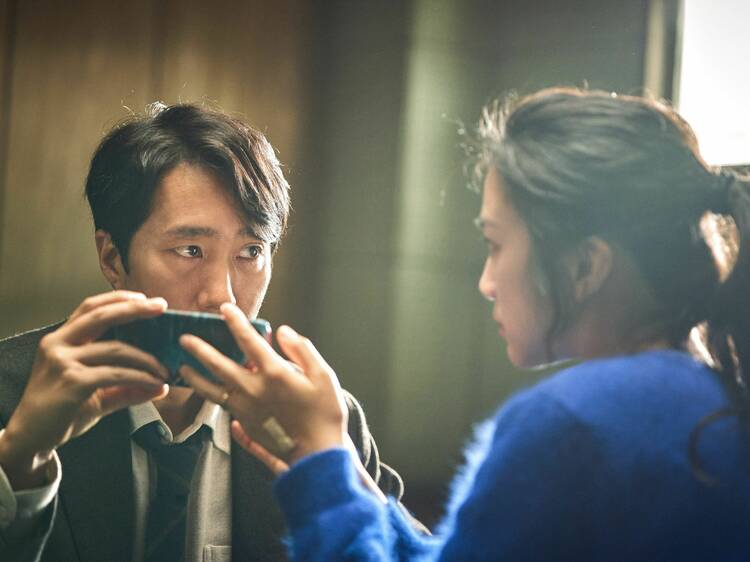 A new film from Korean great Park Chan-wook is always cause for celebration – doubly so if it’s half as good as his last, brilliant period potboiler The Handmaiden. This one is a noir-y thriller about a detective who falls for a mysterious widow. The wrinkle? She’s the prime suspect in his new murder investigation as he tries to find out why her husband fell off a mountain. A classic Hollywood formula – femme fatale and comprised cop – should get a gripping reinvention here. 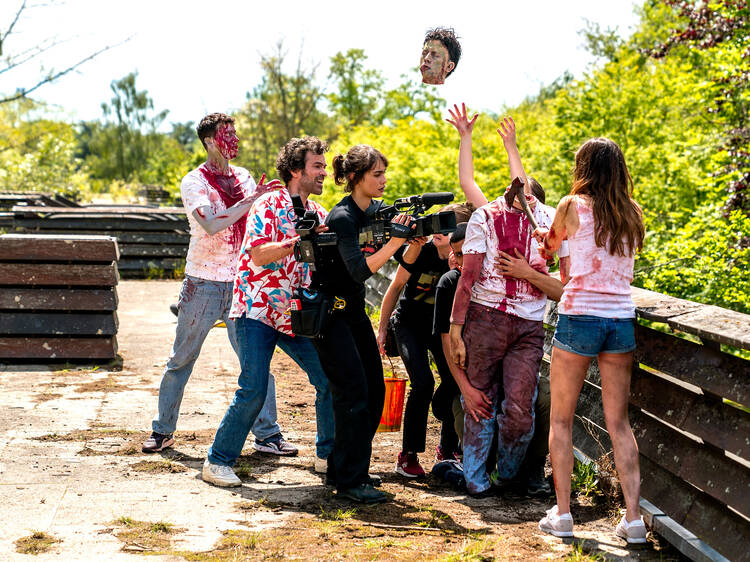 The big Oscar win for his silent Hollywood homage The Artist threw French filmmaker Michel Hazanavicius onto the global stage. But Hazanavicius was already known in France for his Bond-like spy spoofs, the OSS 117 films. Pastiche and honouring other filmmakers are his sweet spots, and here he throws us into the remaking of a cult Japanese zombie flick, One Cut of the Dead. The film stars Romain Duris and Bérénice Bejo, and it looks set to be as much a making-of movie as another tribute to a movie-making style. 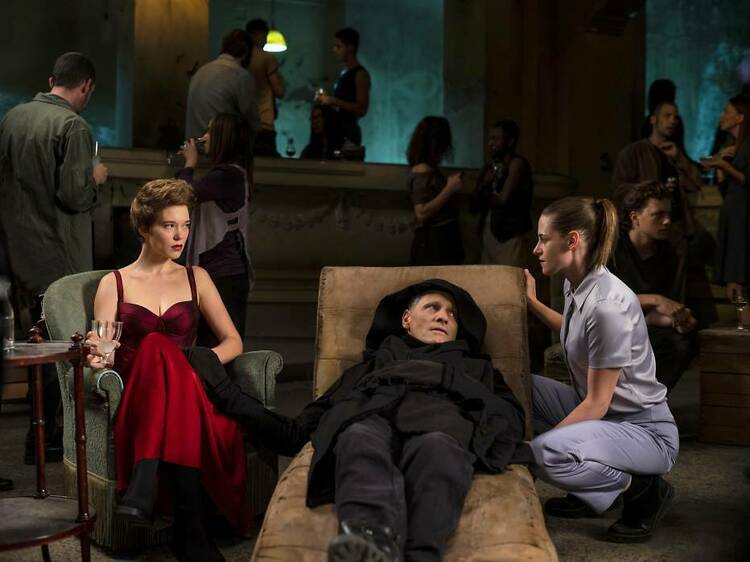 4. Crimes of the Future

David Cronenberg's first sci-fi horror since eXistenZ is already making waves and it hasn’t even pitched up at the festival yet. Genetic science, performance art and celeb culture crossover in a futuristic society where new organs are grown within living humans – including performance artist Saul Tenser (Viggo Mortensen). Léa Seydoux and Kristen Stewart co-star in a film that promises to re-up on the Canadian auteur’s trademark body-horror spectacle and may leave the odd Cannes-goer regretting that lunchtime steak. 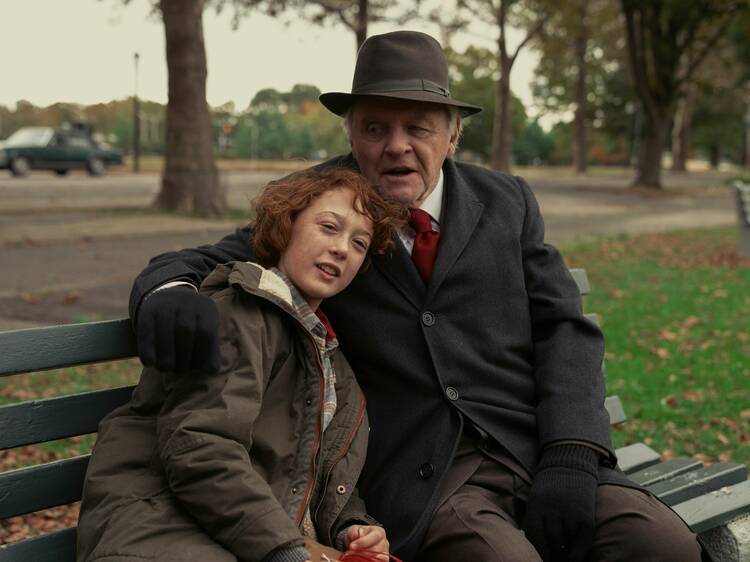 American filmmaker James Gray took a detour from his frequent New York stories for his last film, the sci-fi movie Ad Astra. But the writer-director of The Immigrant and The Yards is back on home turf with this drama set in 1980s Queens. Starring Anthony Hopkins, Jeremy Strong and Anne Hathaway, it describes itself as ‘a coming-of-age story that explores friendship and loyalty while America is poised to elect Ronald Reagan as President’. Considering that’s exactly when Gray himself was going from child to teen, this sounds like it could be his most personal film yet. 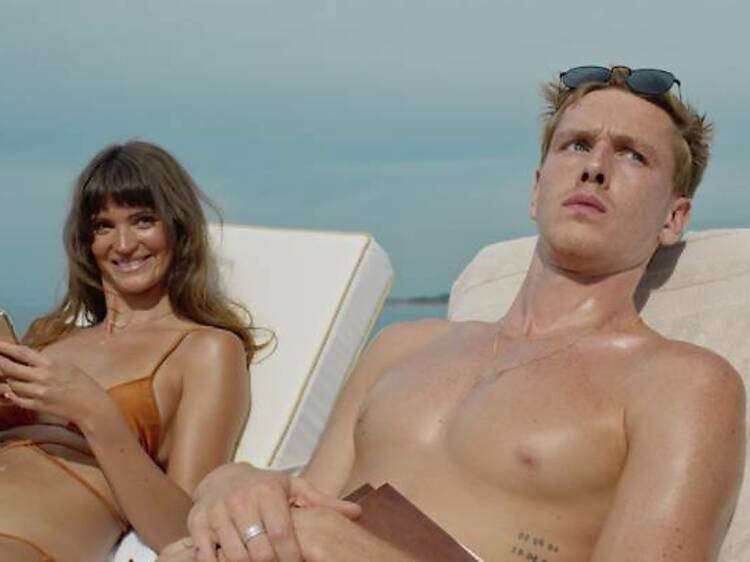 Swedish director Ruben Östlund is the king of highbrow squirm: you might have watched through your fingers his family ski trip comedy Force Majeure (recently turned into a play with Rory Kinnear) or his Palme d’Or-winning art-world satire The Square. Östlund’s latest sees ‘two models and a cleaning lady become stranded on a desert island with a group of billionaires’. If night sound like a fun TV game show, but the reality is likely to be a lot more cutting.

Modern French cinema is rarely more compassionate and insightful than when it’s in the hands of writer-director Mia Hansen-Løve. Her new film sees No Time to Die star Léa Seydoux playing a single mother who is also trying to cope with arranging care for her severely ill elderly father. That’s when she meets an old friend (Melvil Poupaud) and strikes up a romance with him. Most, if not all, of Hansen-Love’s stories play very close to her own life: she has an incredible knack of sharing semi-memoir with a deep sense of self-knowledge and acute observation. Whether or not that’s the case here, she’s a storyteller of immense wisdom. 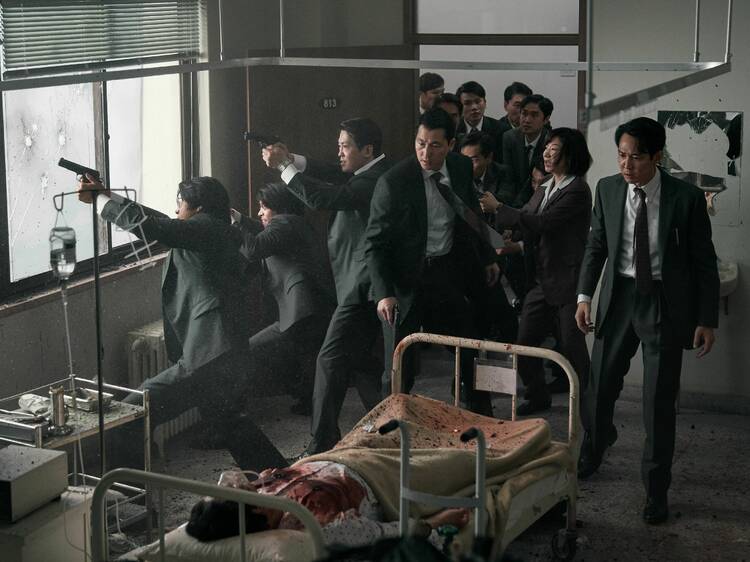 We last saw Lee Jung-jae in action as Squid Game’s battling hero Seong Gi-hun. Happily, the South Korean actor has recovered from that ordeal to deliver his first directorial effort: an espionage thriller that sets two elite National Security Agency spies (Lee himself and Jung Woo-Sung) up against a North Korean spymaster. Will they challenge him to a game of marbles? 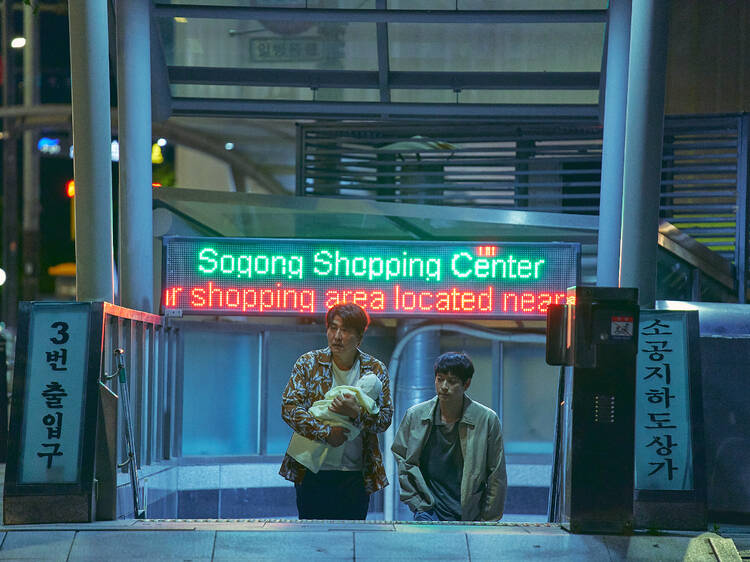 With the likes of Shoplifters, Still Walking and After Life, Tokyo-born great Hirokazu Koreeda has been telling meditative stories set in his homeland of Japan for his entire career. But with his latest, Broker, he’s crossed the Sea of Japan to film in South Korea, hiring one of the country’s best – and best-known – actors in Parasite’s Song Kang-ho as his lead. The story is still veiled in mystery but it centres on a social care mechanism known as baby boxes that allows people to anonymously leave newborns to be cared for. Like Shoplifters, it sounds like another humanist exploration of society’s margins.

Art horribly meets real life with this documentary shot in the city of Mariupol in Ukraine earlier this year by the Lithuanian filmmaker Mantas Kvedaravičius, who was captured and murdered by Russian troops in early April while doing his job. His partner and co-director Hanna Bilobrova was able to leave Ukraine with the footage and worked with Mantas' editor, Dounia Sichov, to complete the film. It’s barely a month since the death of Kvedaravičius (who made a doc in the city in 2016 called Mariupolis), so the Cannes screening of his final film is inevitably going to be a raw and powerful event. 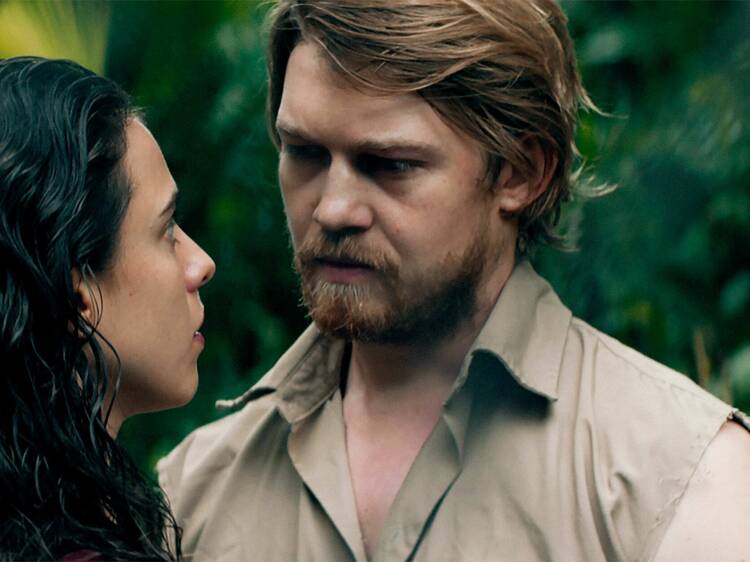 A couple of films after her intergalactic sci-fi High Life, French great Claire Denis is bringing a much less out-there sounding drama to the festival (ie no fuckboxes this time). Stars at Noon is adapted from a 1986 novel by American writer Denis Johnson and follows a journalist (Margaret Qualley) as she plays witness to Nicaragua’s 1984 revolution and falls for a mysterious Englishman (Joe Alwyn). It was shot in Panama, which should lend clammy verisimilitude, and (somehow) is only Denis’s second Palme nominee. 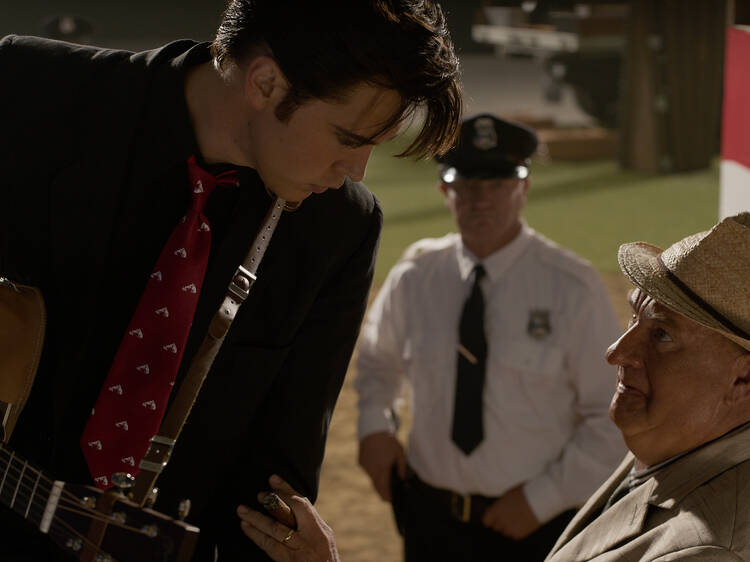 Baz Luhrmann brought his last movie, the extrovert The Great Gatsby, to Cannes in 2013 and he’s back with an early-years-of-Elvis biopic that gets its world premiere at the festival. Even more than Top Gun: Maverick, which screens at Cannes but has already premiered elsewhere, Elvis is the headline act this year. Fans of the King will be hoping that relative newcomer Austin Butler can nail the hip shake and curled lip. Tom Hanks is his famous manager, Colonel Tom Parker.