From ‘Toy Story’ to ‘Forrest Gump’, we look back at Tom Hanks' incredible career to see which film is the best

There’s a reason why Tom Hanks has an asteroid named after him. The A-list actor’s movies have grossed over $8.5 billion, making him one of the highest earning box-office stars of all time. More than just a bankable star, Hanks is a supreme acting talent. The winner of two Oscars, four Golden Globes and seven Emmys, he’s the star of cinematic staples like ‘Big’, ‘Cast Away’ and ‘Sleepless in Seattle’; he’s even starred in a Carly Rae Jepsen video. He’s also been repeatedly named one of the nicest stars in Hollywood.

From romantic comedies such as ‘You’ve Got Mail’ to animated classics like ‘Toy Story’, Hanks has starred in getting on for 90 films. But which is his best? We’ve put together a list of the 17 best Tom Hanks movies. 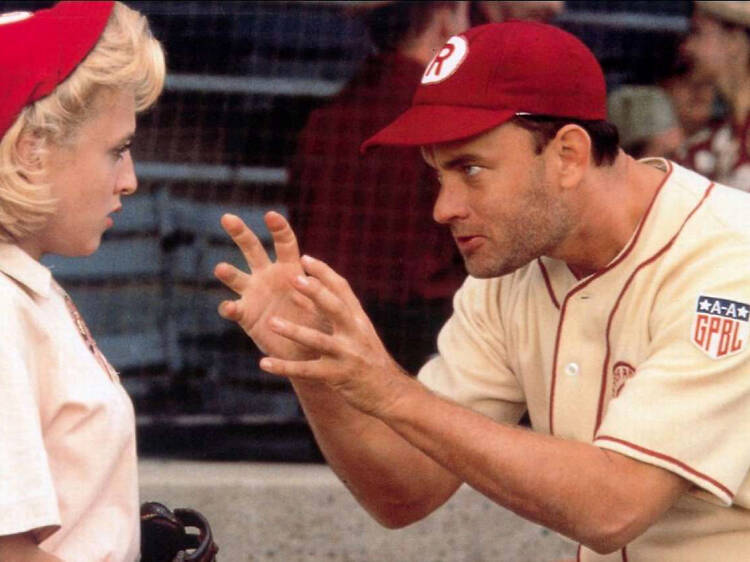 The man who famously told us ‘there’s no crying in baseball’ (he didn’t say anything about rounders), Hanks’s exasperated sports coach, Jimmy Dugan, is a hardass, a sexist and, truth be told, a bit of a bully. Needless to say, he’s still likeable, because the actor just isn’t capable of playing a truly hissable character (okay, maybe in ‘The Ladykillers’). This one reunites him with his ‘Big’ director Penny Marshall. The movie belongs to its female stars (Geena Davis, Rosie O’Donnell, Lori Petty and, yes, Madonna), though, and Hanks never lets his own star power distract from that.

Buy, rent or watch ‘A League of Their Own’ 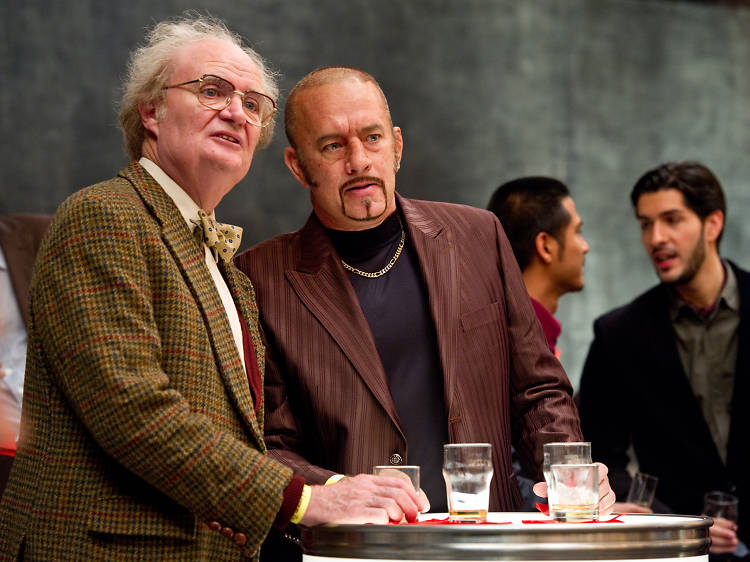 If it’s not one of Hanks’s most successful movies, it’s definitely one of the most memorable – not least because he plays six different characters. Lana and Lilly Wachowski’s attempt to film David Mitchell’s unfilmable, time-spanning novel even has him playing an East End bruiser called Dermot Hoggins. If Hanks’s cockney tones would get him a D at Dick van Dyke’s Cor Blimey Academy of Accents, it’s still testament to his willingness to throw himself into risky projects and not take himself too seriously along the way. 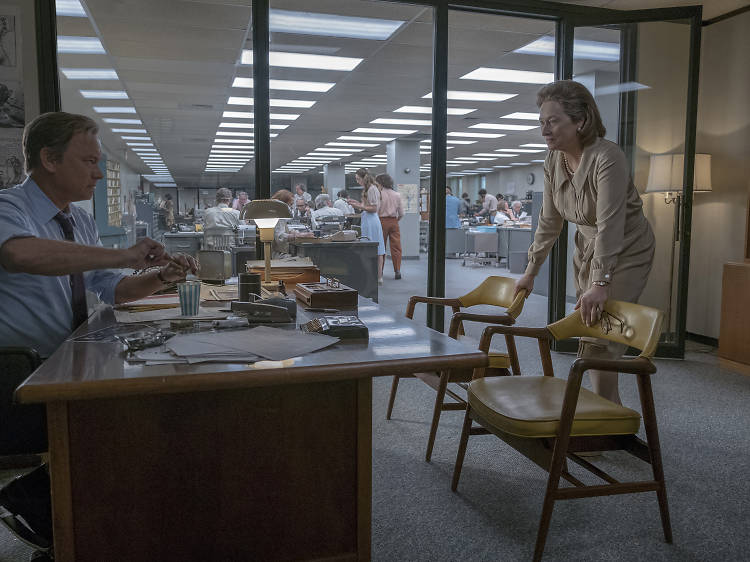 Another Hanks team-up with Steven Spielberg, ‘The Post’ is a timely journo procedural thriller about how the Washington Post published the Pentagon Papers in 1971 and helped shine light on a particularly murky corner of American foreign policy. It hardly sounds like thrill-a-minute stuff unless you’ve got a thing for flatplanning, but the quality of writing and acting makes it a truly zinging drama in which Hanks plays Post editor Ben Bradlee with steel, conviction and a fair few natty ’70s shirts. 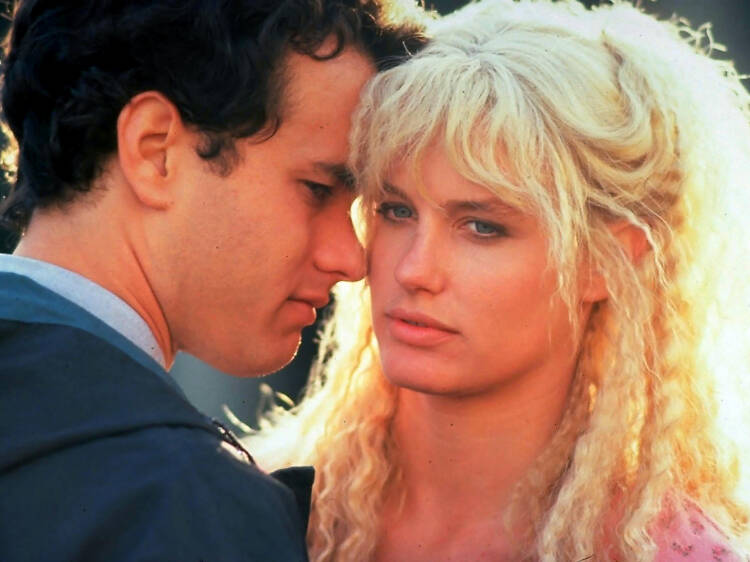 It’s that age-old story: boy meets fish-lady, boy falls for fish-lady, boy gets John Candy to help stop fish-lady ending up as sushi. Okay, it feels a bit preposterous initially but Hanks and his co-star Daryl Hannah give it so much heart and conviction that it transforms into a genuinely affecting fairytale. Well, he can do that to you. You can keep ‘The Shape of Water’; for aquatic romance, we’ll take ‘Splash’ every day. 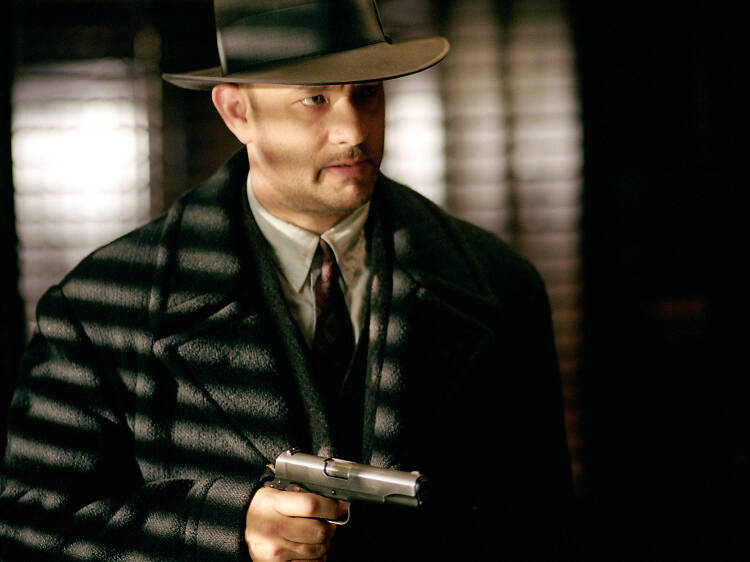 As the father part of this father-and-son revenge yarn set during the Great Depression, Hanks tools up with a tommy gun and an extra layer of ruthless proficiency. He’s not the first person you’d think of when it comes to casting a mob enforcer, but the sheer against-typeness of his role allows his performance – full of heavy-laden fatalism and sad fury – to creep up on you in a way that few others do. This film itself is sometimes heavy-handed but Hanks gives it a powerful emotional core. 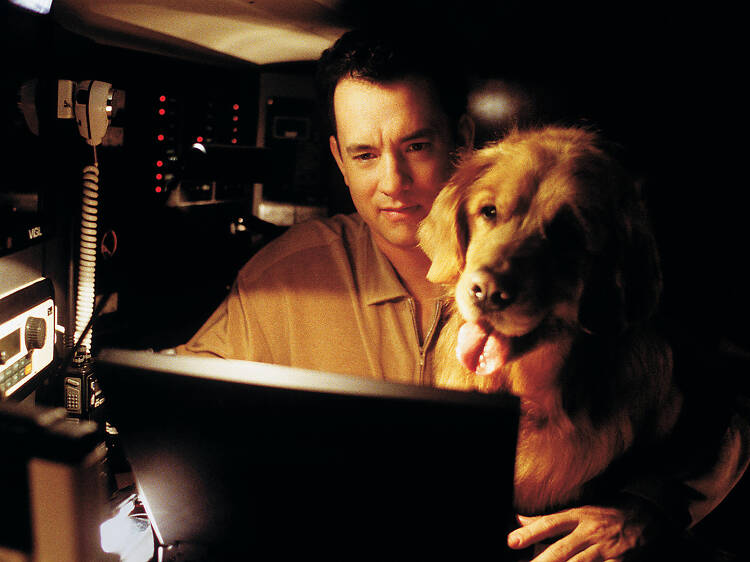 In this update of ‘The Shop Around the Corner’, Tom Hanks reunites with Meg Ryan and writer-director Nora Ephron for a funny, smart, feelgood film about dating in the (then-new) digital age. Hanks, again, inhabits his role as corporate bookseller Joe Fox so thoroughly, you forget that he’s, well, Tom Hanks: he perfectly exudes a mixture of yuppie arrogance and awkward romantic charm. His chemistry with Ryan is also undeniable, and by the end of the film you’ll want to fire up a dating app and have your own cosmopolitan romance. 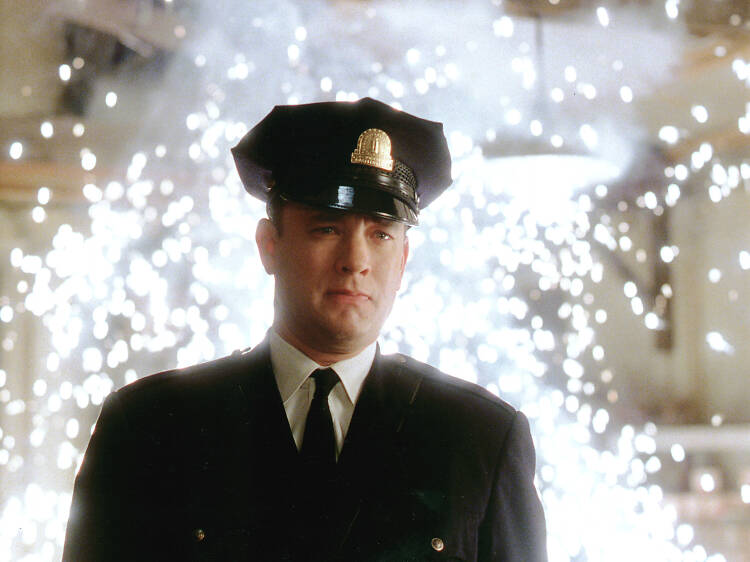 In Frank Darabont’s prison epic, Hanks plays a corrections officer presiding over death row inmates as they await the inevitable. Unlike the average movie screw, a bar-rattling, cudgel-happy bastard, he brings warmth and sorrow to the unenviable job of ushering these largely vulnerable men to the hereafter. Try thinking of another actor who could imbue this death-row functionary with so much humanity. 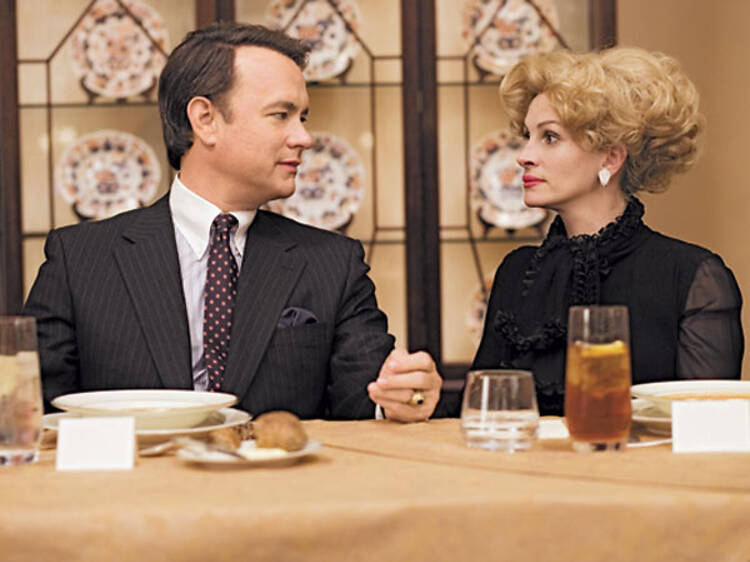 Hanks delivers plenty of Aaron Sorkin-scripted zingers as Texan congressman Charlie Wilson, dispensing southern bonhomie and shady deals on behalf of a plausibly deniable US government. It’s one of those kinda-based-on-a-true-story biopics where you know there’s been just enough licence taken to have fun with the facts – and Hanks is having a blast throughout, especially when he flexes his acting muscles up against Julia Roberts and the late great Philip Seymour Hoffman. 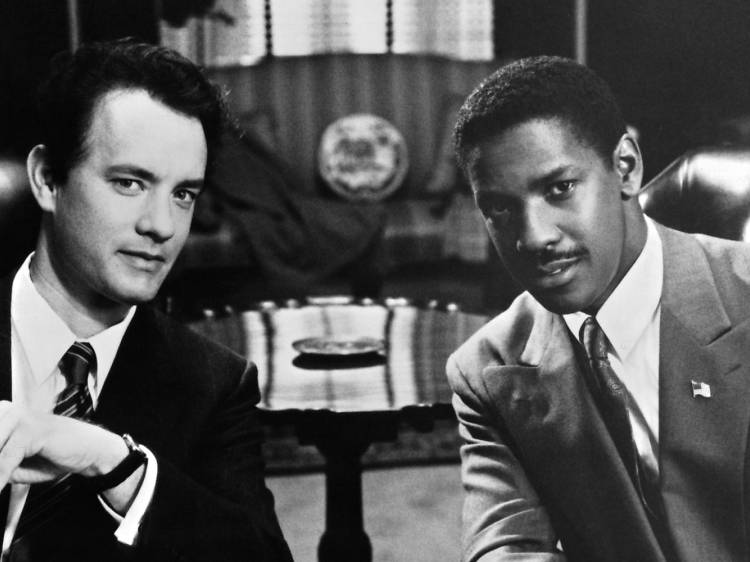 An Oscars-laden drama about Aids, prejudice and the importance of having an HR department that doesn’t just comprise of homophobic assholes, ‘Philadelphia’ has Hanks committing fully to his craft as a lawyer with Aids who finds himself fired on the thinnest pretext. Hanks lost 26lbs for the role and his gaunt, haunted look in the final scenes makes the courtroom victory feel fittingly pyrrhic. It’s not a film filled with punch-the-air moments but an elegy to teeth-clenched doggedness, and he’s a master at portraying that quality. 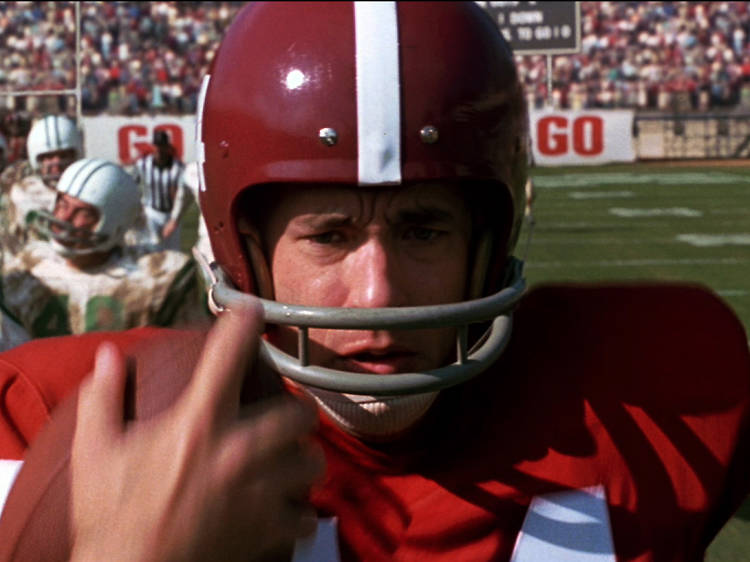 Love it or hate it, there’s no denying the primacy of Robert Zemeckis’s decades-spanning epic on the Hanks CV. It won him his second Oscar, a year after ‘Philadelphia’ bagged him the first, marrying critical and box-office success into a kind of perfect storm of low-key superstardom. Those two movies showed his range – one in which he played an Aids patient, the other in which he played a man of limited emotional means left to pick up the pieces after his lifelong love dies of the same disease. The truth was, he could win you over either way. 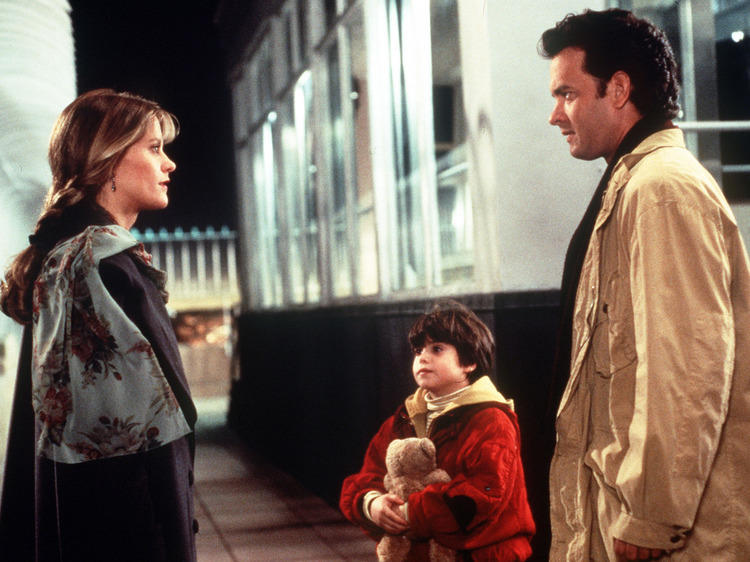 This Nora Ephron film is a romcom where the central couple don’t actually meet until the end. Nevertheless, thanks to Ephron’s shrewd direction and the acting chops of Meg Ryan and Tom Hanks, you’re rooting for their respective characters and the romance throughout. Hanks brings humanity and gravitas to the character of Sam, a widower in search of love. He expertly navigates the character’s relationship with his son, Jonah (played by a precocious Ross Malinger), giving a film so centred on fate and destiny a needed injection of realism. Nevertheless, Hanks’s ability to mix vulnerability with humour makes for absolutely charming viewing, exemplifying his understanding of what works in a romcom. 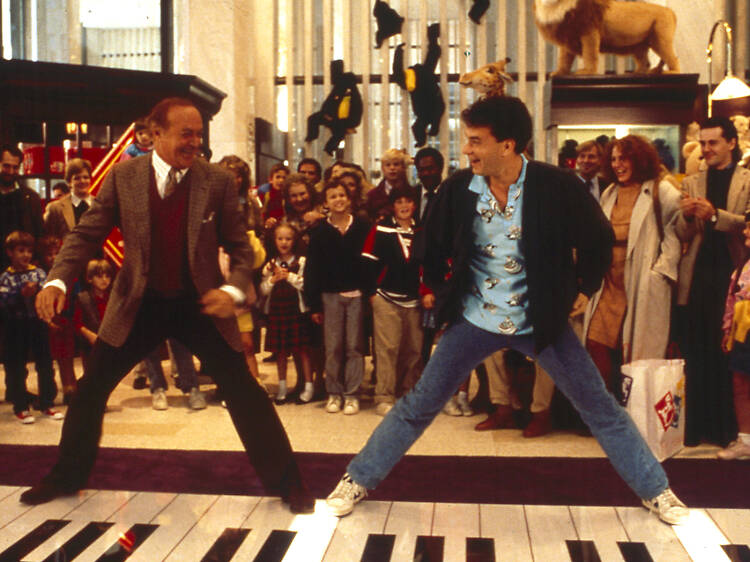 Any film that features Tom Hanks dancing on a giant piano pad in a toy store deserves a place on his best films list. In this age-swap comedy, he’s also incredibly funny, proving his chops as a comedy actor while also knuckling into the gleeful and energetic role of being a kid. Hanks brings heart to the role of Josh as he navigates his new life as a grown-up, helping the viewer and every jaded adult connect to the child within. 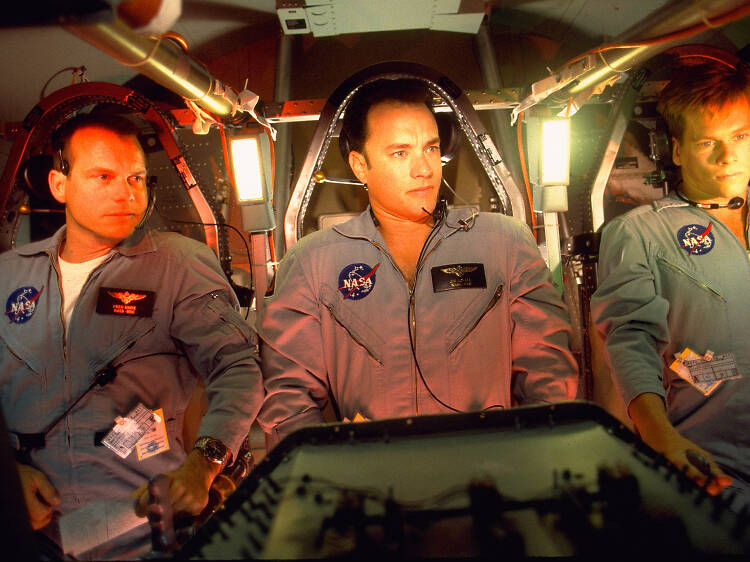 Ron Howard’s dramatisation of the failed Apollo 13 moon landing mission of 1970 avoids the usual clichés entrenched in disaster movies: you’ll find no inane subplots and saccharine sentimentalities here. Instead, Howard’s focus is on the reality of the situation at hand as well as historical accuracy. Hanks is our emotional pull into the story, and his knack for playing the everyman adds layers of empathy for our heroes as their journey into space turns sour. It’s further proof of Hanks’s innate ability to inhabit his characters, no matter their which life-threatening occupation or emotionally draining situation they find themselves in. 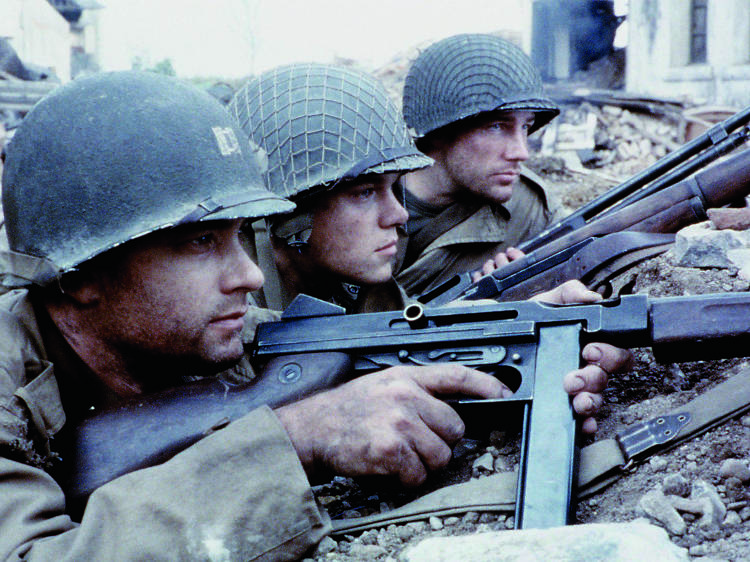 The perfect embodiment of Hanks’s everyman persona – he’s surely the closest we have to a modern-day Jimmy Stewart – comes in the whirlwind of combat in this harrowing war epic. As Captain John Miller, he’s noble in the face of barbarity, risking mutiny to prevent the execution of a German POW, and riven with little tics: the barely-controllable shakes speak of a man burdened with PTSD. Hanks makes him inspiring and vulnerable all at once. No John Wayne-style war hero but an average joe of unusual substance. 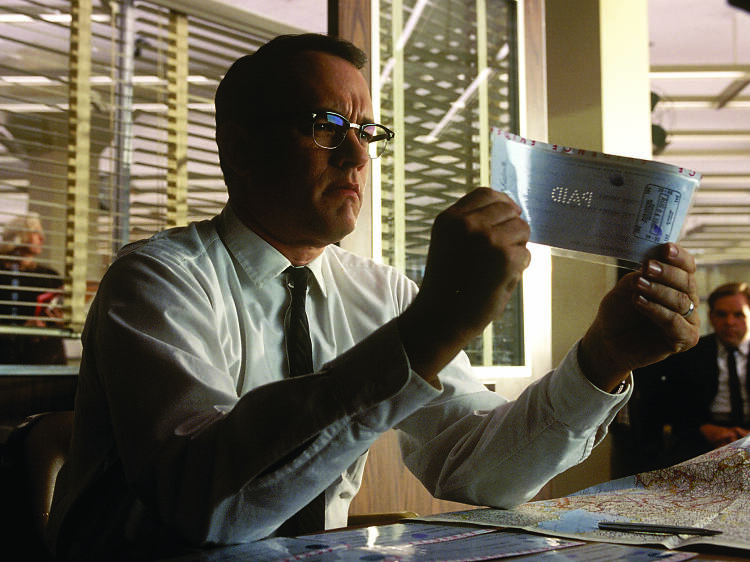 For our dollar, this is the best of Hanks’s numerous, fruitful collaborations with Steven Spielberg. Hanks brings shade to a light-touch caper with hidden depths. Crime (represented by Leonardo DiCaprio’s charming con-man, Frank Abagnale) jousts with punishment (embodied by Hanks’s stiff-backed FBI man, Carl Hanratty) as DiCaprio’s trickster leads a charmed life and the dogged Fed keeps on his trail. To add nuance, there’s a father-and-son dynamic playing out too. And who wouldn’t want Tom Hanks for a dad?

Buy, rent or watch ‘Catch Me If You Can’ 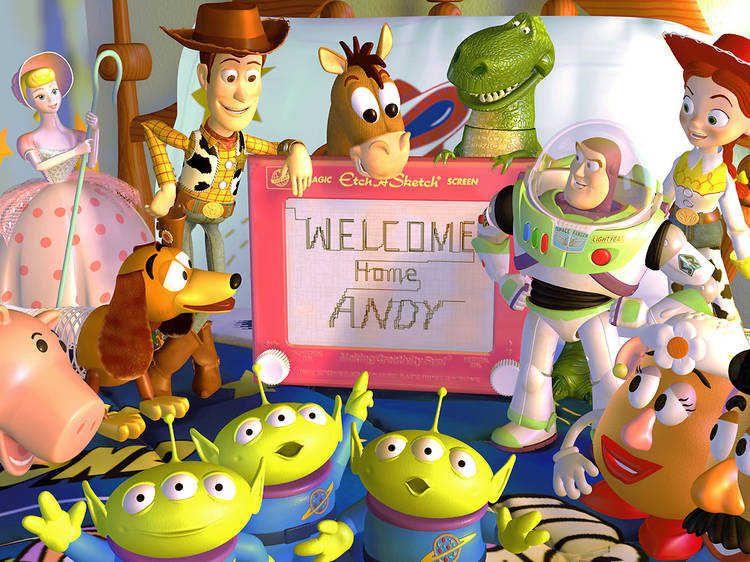 It’s been dubbed the ‘Empire Strikes Back’ of the ‘Toy Story’ franchise and there’s even a ‘Star Wars’ reference tucked into the film’s plot. However, ‘Toy Story 2’ is more than just a fabulous sequel. The film packs an emotional punch as Woody, played by Hanks, comes to understand that nothing in life lasts forever. It’s weighty, but the actor has an ability to infuse emotion and humour into a CGI cowboy doll, which gives the character that all important human touch. The results inspire childlike wonderment. 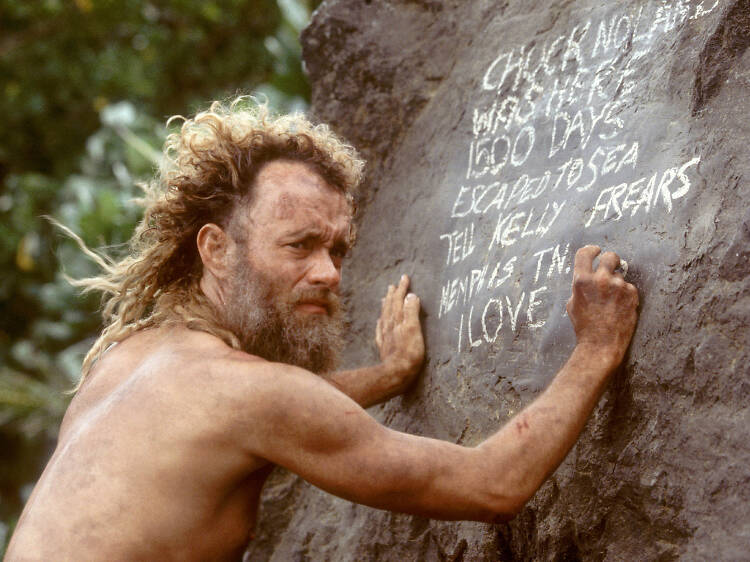 If you don’t shed a tear when Wilson, the beloved volleyball, floats away from Tom Hanks as he attempts to make his way back to civilisation after spending four years marooned on an uninhabited island, well, we can’t help you. Hanks spends most of this film alone, which is testament to his craft: there’s not many actors that can command your attention playing off a coconut. The result is an absorbing film that meditates on survival, loneliness and, ultimately, what it means to be human.

Buy, rent or watch ‘Cast Away’