My Account My Profile Sign out
My Account
Search
Worldwide Europe United Kingdom England London Elisabeth Moss: ‘I have a very high threshold for darkness’
Advertising

Elisabeth Moss is sitting in the library of a swanky Soho hotel surrounded by vitamins and cough syrup. The actress is fresh from the Cannes Film Festival, where her movie ‘The Square’ picked up the Palme d’Or and she bagged some A-list germs. She was walking the red carpet not so long ago, but now she’s wearing ripped jeans and a leather jacket. ‘I just wanted one day where I felt more me. I’m a girly girl, I like dressing up, but I am more comfortable like this,’ she says. Despite the sore throat, Moss is loud and giggly. She begins our interview by lying down on a sofa. ‘I hope this is okay,’ she laughs. ‘It feels good.’

You may know Moss as kickass feminist Peggy Olson in ‘Mad Men’ or President Bartlet’s precocious daughter in ‘The West Wing’. We’re here today to talk about the return of Jane Campion’s dark detective drama ‘Top of the Lake’ and terrifyingly topical spec-fic story ‘The Handmaid’s Tale’. She’s a producer on the TV adaptation of Margaret Atwood’s dystopian novel and stars as the titular handmaid, Offred. ‘The book was everything. I read it over and over. I memorised it,’ Moss gushes. The show is equally compulsive. It’s been unsettling viewers in the US with its troubling story of Gilead, a republic in which women are stripped of their rights and forced into reproductive slavery. Now, the chilling series has found a home here, on Channel 4.

You take on dark and disturbing roles, but in person you’re so sunny. What’s up with that?
‘I know, right? People always say “But you’re so nice!” It’s just fun for me. It’s like asking a musician: why do you like to play jazz? I just like dark stuff.’

Are you drawn to darkness in real life?
‘No! I love beach reads and comedy. I watched “Gilmore Girls” while we were making “The Handmaid’s Tale”. I was so embarrassed, I’ve only recently told Alexis [Bledel, who stars in both “The Handmaid’s Tale” and “Gilmore Girls”]. I do have a very high threshold for darkness. I’m not one of those people who gets scared watching crime documentaries. I love that shit.’

Was taking the lead in ‘The Handmaid’s Tale’ a no-brainer?
‘No. It takes me forever to say yes or no to something. This decision took six weeks. I knew that if I signed on to another TV show, I wanted to also be a producer.’

Have you found it easy to get your voice heard?
‘I think it’s very important to have as many female creative voices as possible. Bruce [Miller] and Warren [Littlefield, the show’s producers] came to me and said: “You are the female voice of the show and we need you to have that responsibility.” I’ve been lucky in that sense, because I’ve pitched things to networks before and been told they are too female because they have a female protagonist.’

‘The Handmaid’s Tale’ was written in the ’80s and made into a film in the ’90s. Why is now the time for a TV adaptation?
‘We, as women, want to see ourselves reflected back. We want to see stories led by women, about our lives. Women, especially now, are concerned with rights.’

It certainly does seem very topical right now.
‘Sure. Trump won and things got very, very relevant halfway through shooting the show. But the ideas – sexual slavery, child trafficking, violation of the constitution, violation of human rights, religious freedom, women’s rights, genital mutilation – are not exclusive to 2017.’

Does it feel like you’re making a political statement?
‘How can it not feel like a statement? It’s about a theocracy in America, a right-wing fundamentalist group taking over the government. I don’t usually take my work personally, you know. When I’m acting, I’m pretending, but with “The Handmaid’s Tale” I found myself pretending less and less.’

The idea that people in Gilead didn’t look up from their phones until it was too late really hits home. Are you guilty of spending too much time on social media?
‘Oh for sure. We’re connected by the internet and there are a lot of wonderful things about that. It’s amazing to hear from women who feel empowered or moved. A girl recently was struggling with whether or not she should go back to acting in college. We were writing back and forth and I gave her advice. I love that part. But we have to remind ourselves that it’s not the only form of communication – and it’s actually not human interaction.’

Elisabeth Moss and Alexis Bledel in ‘The Handmaid's Tale’

Have you ever fallen victim to the darker side of the internet?
‘I’m only on Instagram. It’s my choice not to tolerate trolling. I monitor all of my comments and make sure that if there is a discussion happening, it remains an exchange of ideas and viewpoints. I do not tolerate racism, sexism, bullying, trolling. How can we let that be okay? I don’t like the argument that it’s free speech. That’s not fucking free speech; it’s bigotry and hatred.’

There was a four-year break between seasons one and two of ‘Top of the Lake’. How did it feel to go back after so long?
‘I love the character [Detective Robin Griffin]. She’s so badass and interesting, she’s tough and strong. After the first season I did two more seasons of “Mad Men” and some movies. I had experienced four years of life, so I felt older. It was cool to bring that back to the character.’

Is it true that you asked Jane Campion to make ‘Top of the Lake: China Girl’ darker?
‘I feel like this isn’t a good look for me! But, yes, I did ask for it to be darker. [Robin] starts out in a very bad place. She’s had a bad four years and then, yeah, it gets worse.’

You’re so busy. What do you do to relax?
‘I have a hard time relaxing. I had four days off recently and it took me three to really enjoy it. But I love watching telly. I watch everything: “Master of None”, “Girls”, “13 Reasons Why”… I’m watching a lot of movies right now because we’re researching directors for “Handmaid’s” season two.’

‘The Handmaid’s Tale’ continues on Channel 4 on Sundays at 9pm.
‘Top of the Lake: China Girl’ will be on BBC2 this summer. 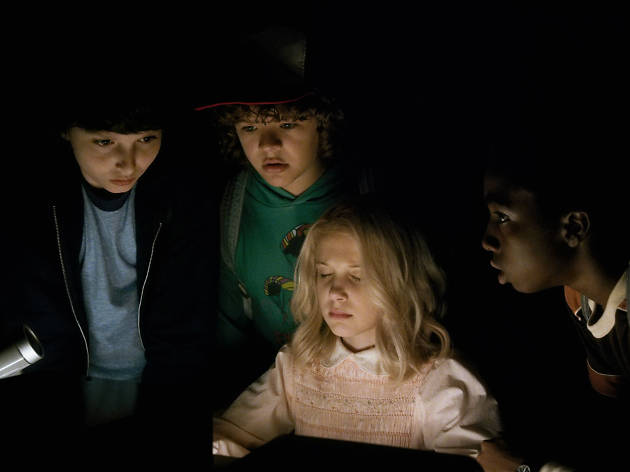