The 22 best things to do in Memphis

Graceland, Beale Street, Sun Studio, and more: these are the best things to do in Memphis this year.

As Nashville becomes increasingly popular (read: overcrowded) you don't want to sleep on Memphis. This historic southwestern Tennessee city – known for its fascinating history, lots of live music, and some of the best BBQ in the country (sorry, not sorry, Kansas City) – is ready for its moment in the spotlight.

What’s more, Memphis – which is known as both the “Home of the Blues” and the “Birthplace of Rock 'n Roll” – is teeming with music and mouthwatering bites. After all, this is the home of the legendary Sun Studio (Johnny Cash and Elvis Presley both recorded albums here), Presley's iconic Graceland estate, and the World Championship Barbecue Cooking Contest, which is in the Guinness World Record as the "largest pork barbecue contest in the world" (FYI, it takes place each May!).

Not convinced yet? A mere walk around Beale Street – which may seem like an overhyped tourist attraction but, upon second glance, is actually a local favorite as well – will undoubtedly turn Memphis into one of your favorite cities across the US. So, book a room (there are plenty of top-notch hotels in the area) and stay awhile: Here are all the best things to do in Memphis.

RECOMMENDED: The best restaurants in Memphis

Best things to do in Memphis 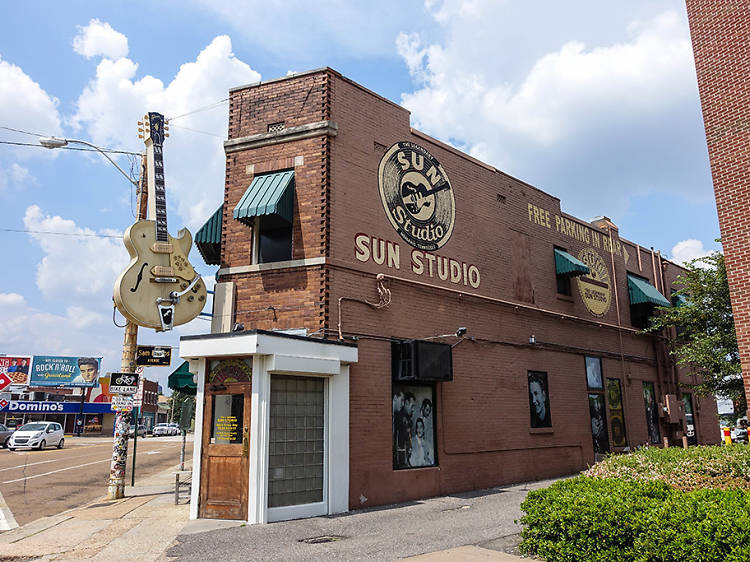 Elvis Presley got his start at this small studio just east of downtown Memphis. Today, you can take a tour to learn all about Memphis’ musical lore from local artists who serve as tour guides. Plus, you can even stand at the microphone where the King of Rock & Roll himself made history while crooning “That’s All Right.” 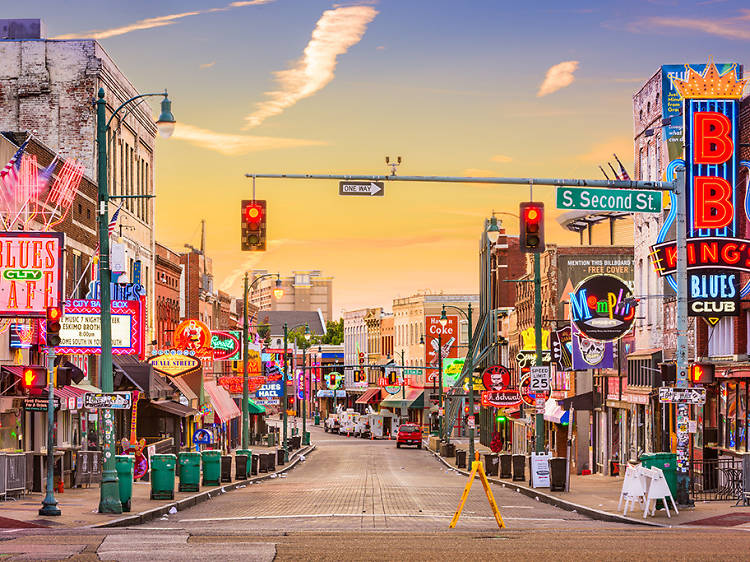 On the surface, Beale Street may seem like a regular tourist destination. But, stay a little longer, and you’ll experience some uniquely Memphis things. For example, find the Irish jumping goats at Silky O'Sullivan's, take in a world-class concert at the historic New Daisy Theater, scoop up a sundae at A. Schwab, nosh on a burger cooked in 100-year-old grease at Dyer’s, and (so) much more. 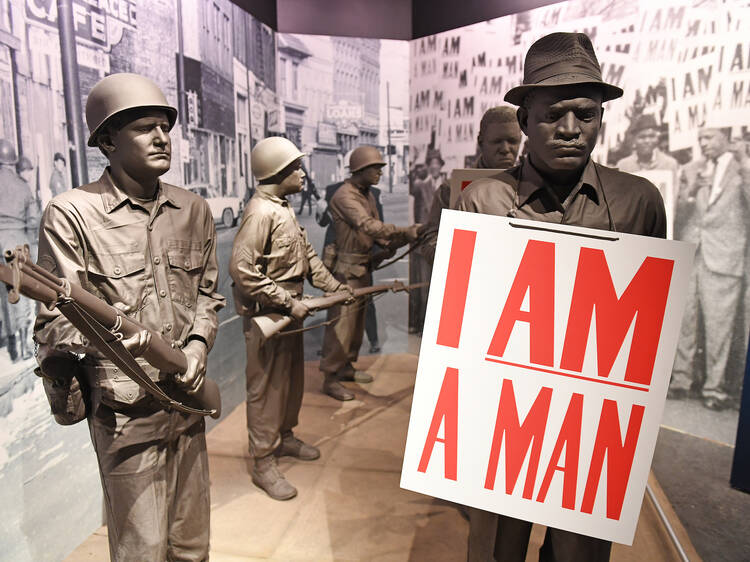 Built on the site of Dr. Martin Luther King Jr.’s 1968 assassination, the National Civil Rights Museum at the Lorraine Motel immerses visitors in the struggles of achieving civil rights from slavery through the 1960s and today. Experience first-hand accounts of events through artifacts, special displays, video presentations, and more. 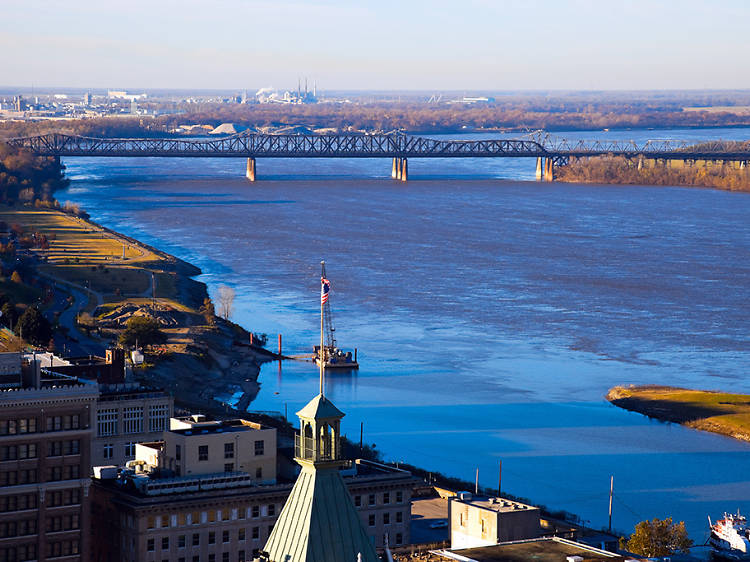 Divine abilities are not required to walk across this body of water. Instead, use the Big River Crossing’s bike and pedestrian bridge to travel across the Mississippi to West Memphis, Arkansas. Take in sweeping views of the river and the downtown skyline while enjoying the bridge’s seasonal light displays. 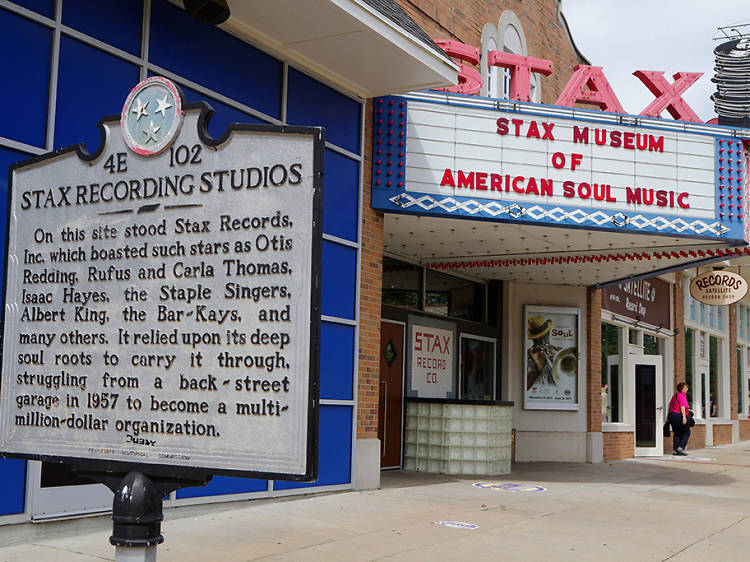 Take a trip to Soulsville in southern Memphis to visit the Stax Museum of American Soul Music. Built on the site of Stax Records, the museum offers a fun- and music-filled look at the origins of Memphis soul, focusing on legends like Otis Redding, Carla Thomas, and Booker T. & the M.G.'s. You can also get a close-up look at Isaac Hayes’ gold-plated, fur-lined Cadillac. 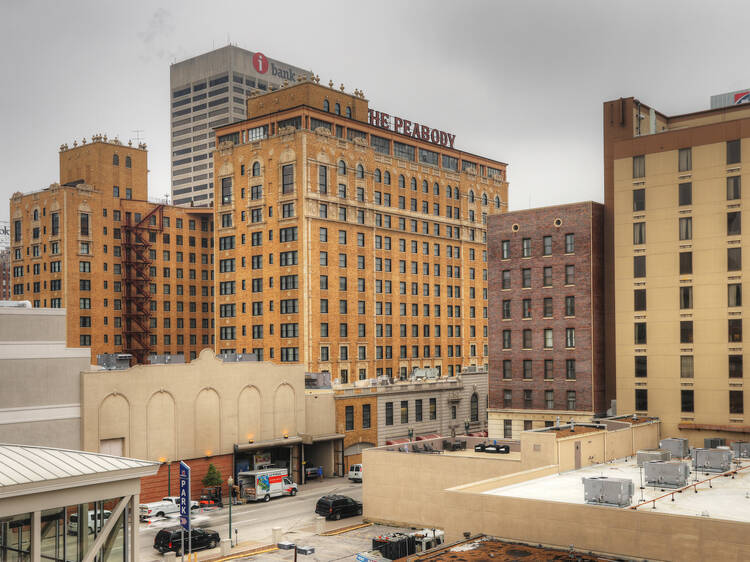 Each day at 11am, a small but mighty parade of adorable ducks make their way from the rooftop of the Peabody Hotel across the lobby to the marble fountain, which is where they spend the day. Led by their red-coated Duckmaster, the feathered friends then return upstairs at 5 p.m. Kids get front-row seats to the march, while adults can enjoy a cocktail from the Lobby Bar. 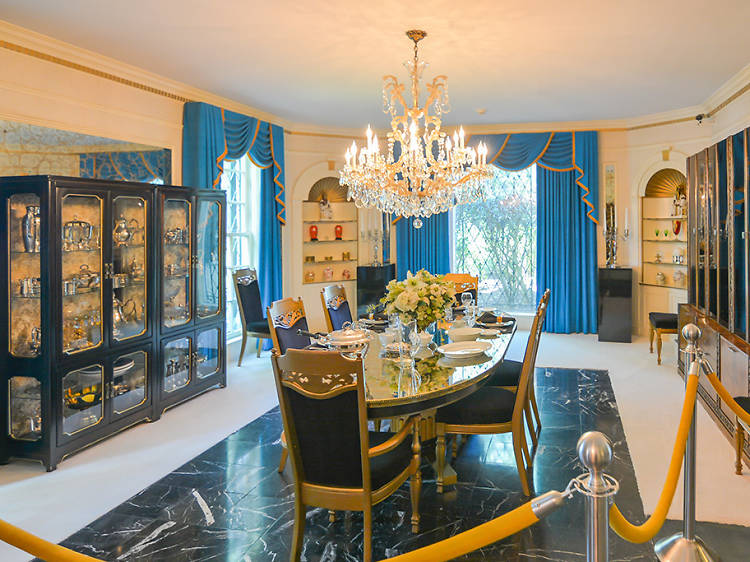 A Memphis travel guide would be incomplete without the well-known home of Elvis Presley. At Graceland, visitors can learn more about the artist’s origins and see his '70s home decor, including the famous Jungle Room. Across the street—and next to several cafes and other museums dedicated to music—you’ll find a relatively new museum featuring Elvis’ collection of classic cars. 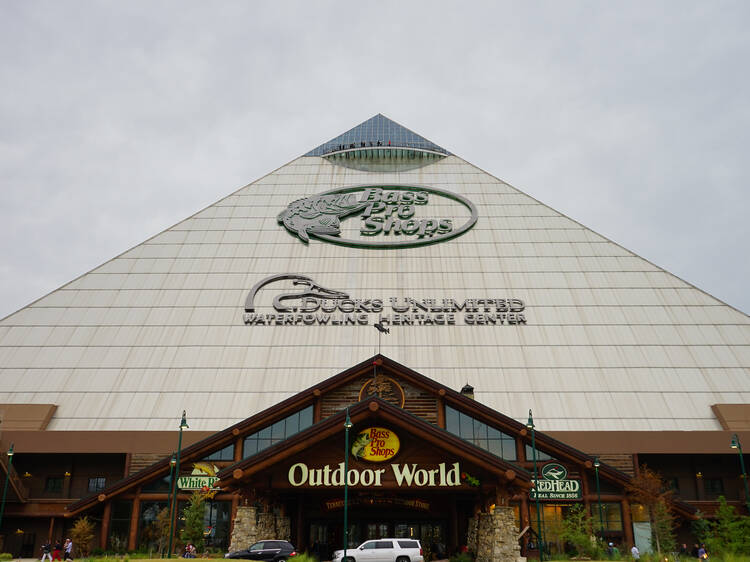 8. Bass Pro Shops at the Pyramid

Why is there a pyramid in Memphis? And, why is it an outdoors supply store? Can I get to the top? Find out the answers to these two burning questions inside the enormous glass pyramid, where you can ride the nation’s tallest freestanding elevator to the observation decks. Bass Pro is also home to a bowling alley, restaurants, shooting ranges, and more. 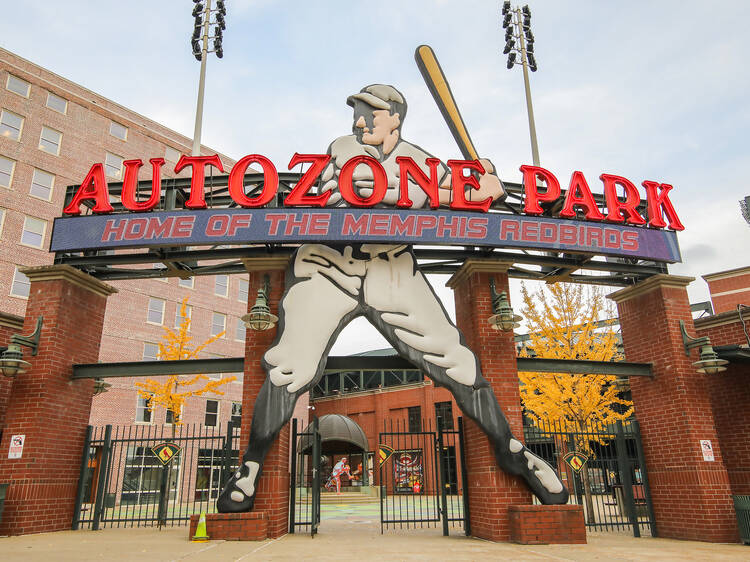 Se pro players in action before they’re called up to the big leagues by watching the Memphis Redbirds Triple-A baseball team play at AutoZone Park. Grab a local Ghost River brew and some barbecue nachos. Post-game, be sure to stick around for Saturday night fireworks at the ballpark. 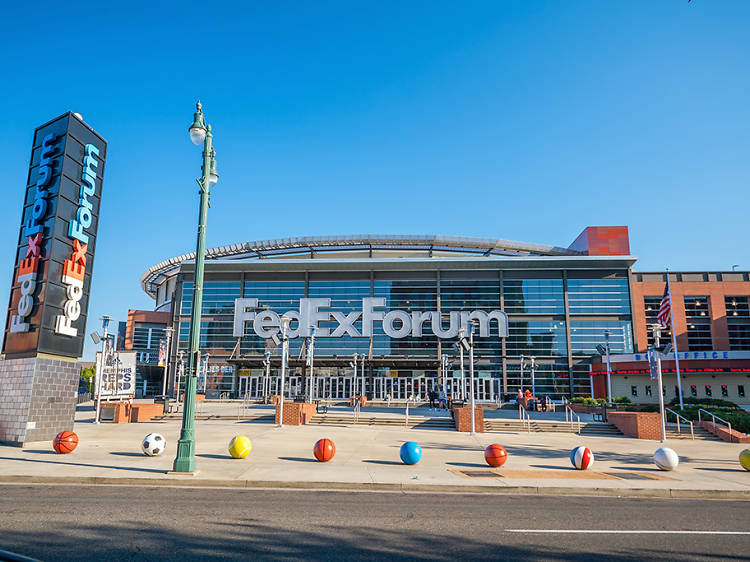 FedExForum – which is conveniently close to Beale Street – is where you’ll find the local sports fans during basketball season. Cheer on the Memphis Grizzlies, an NBA team, and the University of Memphis men’s basketball team (AKA the Memphis Tigers) in this state-of-the-art arena. FedExForum also hosts world-class concerts and tours throughout the year.

During the daytime, Paula & Raiford's Disco appears to be nothing more than a basic storefront on South Second Street. At night, however, the two-story venue comes alive with a red carpet entrance, bright lights, disco balls, a light-up dance floor, a fog machine, and the absolute best dancefloor to step on. Don’t forget your “sexy” stamp from club owner Paula Raiford.

The Malco Summer Drive-In is one of a few outdoor drive-in theaters still operational in the country. Don’t miss the Time Warp, a once-a-month, all-night movie marathon featuring cult classics. Pull up, roll down your windows, and enjoy favorites like Alfred Hitchcock’s The Birds, The NeverEnding Story, and Jaws. 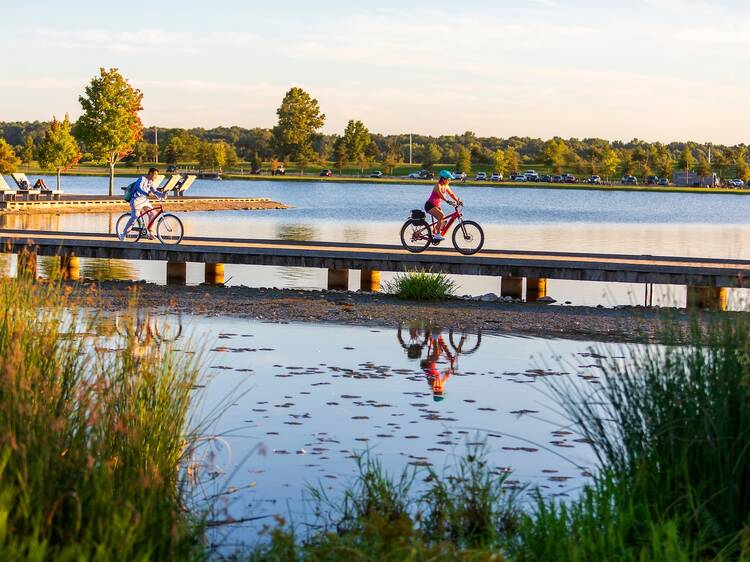 Go where the locals go on sunny days (Memphis has plenty!) and enjoy the outdoors at Shelby Farms Park. As one of the largest urban parks in the nation, Shelby Farms offers miles of paved and unpaved trails, as well as boating (think: canoes, kayaks, SUPs, paddle boats, and more), a state-of-the-art playground, a Go Ape Zipline & Adventure Park, horseback riding, a handful of dining options, and a herd of buffalo. TL;DR: It’s impossible to be bored here. 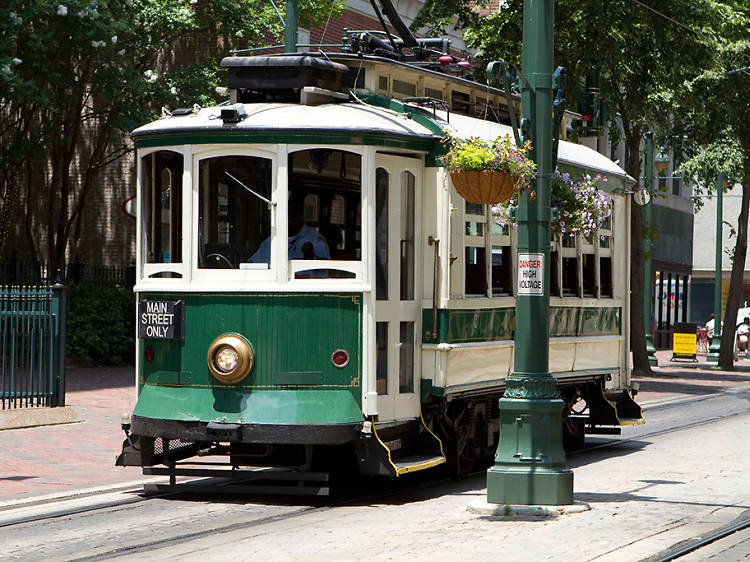 South Main Street in downtown Memphis offers visitors the chance to experience the city’s culture all on a single street. Take a ride on a vintage trolley, eat at dozens of locally-owned eateries, peruse the Blues Hall of Fame Museum and the Center for Southern Folklore, grab coffee at a cafe, and spot plenty of totally Instagram-worthy murals and sculptures.

This outdoor amphitheater—which is located in the heart of picturesque Overton Park—hosts about 50 free concerts every year. Families flock from all around town with their blankets, chairs, and picnic baskets to enjoy live music coming from the same stage where Elvis first publicly performed.

Yes, you can always hear the blues on Beale, but, for an off-the-beaten-path experience, stay up late and visit Wild Bill's Juke Joint in the Vollintine-Evergreen District. Here, visitors can music from longtime blues gurus playing way into the wee hours of the morning. Beverage options include domestic beers in 40-ounce bottles or soda setups. (We’ll drink to that.)

Good soul food is worth the wait, and, while you can find delicious Southern-style meals at several excellent spots around Memphis, Alcenia’s comes with an extra personal touch. Owner B.J. Chester-Tamayo often greets customers with hugs and personalized service before she prepares each meal. Choose from dishes like fried chicken, battered catfish, greens, cornbread, mac and cheese, yams, and more. 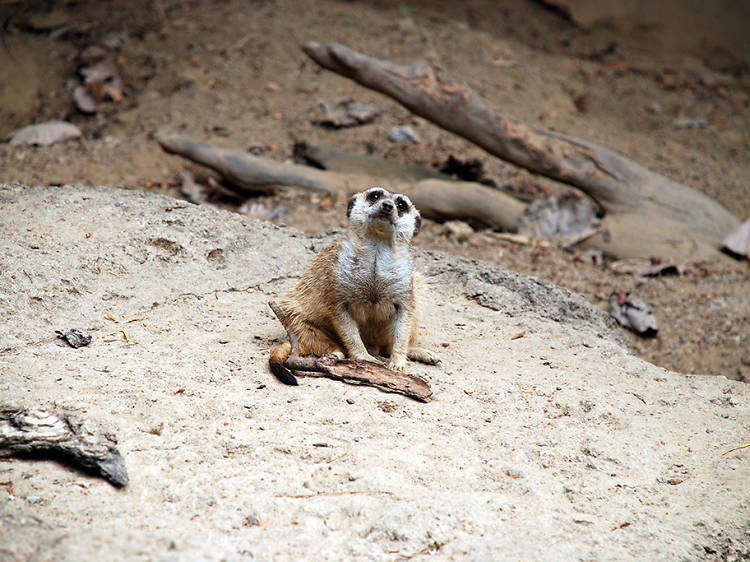 Only three zoos in the United States have giant pandas on display—and the Memphis Zoo is one of them. Come see YaYa and LeLe play and eat bamboo, then explore the rest of the top-ranked zoo—home to polar bears, lions, monkeys, plenty of birds and reptiles, penguins, and a baby hippopotamus named Winnie.

The Broad Avenue District is one of several Memphis neighborhoods where you can spend an afternoon shopping, eating, and drinking. Shop at Five In One Social Club or Falling Into Place for local souvenirs beyond generic tchotchkes. Then, grab a bite at Bounty on Broad, Maximo’s, or The Liquor Store. Then, finish off your night with live music and craft cocktails at The Cove. 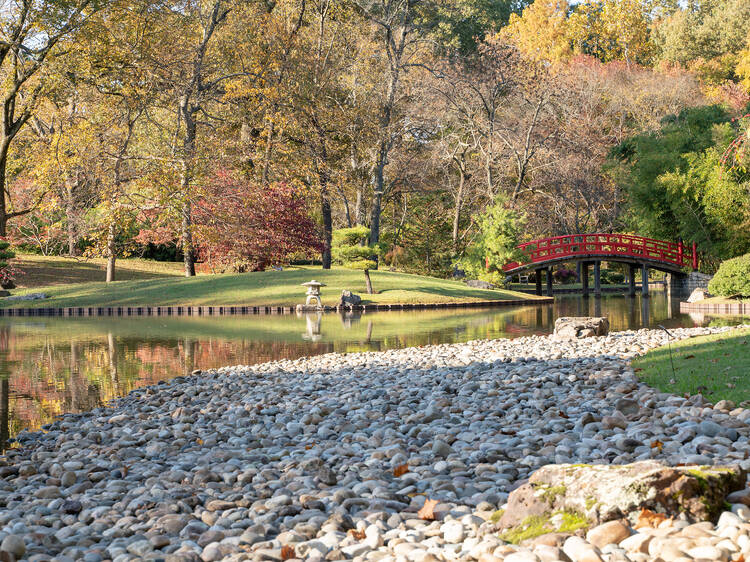 Spend some time strolling through the Memphis Botanic Garden. The 96-acre space boasts 30 specialty gardens, including rose and sculpture ones. You’ll also find nearly 170 acres of trees. Now through October 31, the Memphis Botanic Garden is hosting an Alice and Wonderland-themed exhibit that features awe-inspiring, topiary-like sculptures—as well as themed events like family tea parties. After, visitors can enjoy Holiday Wonders at the Garden, when sculptures come to life with light. 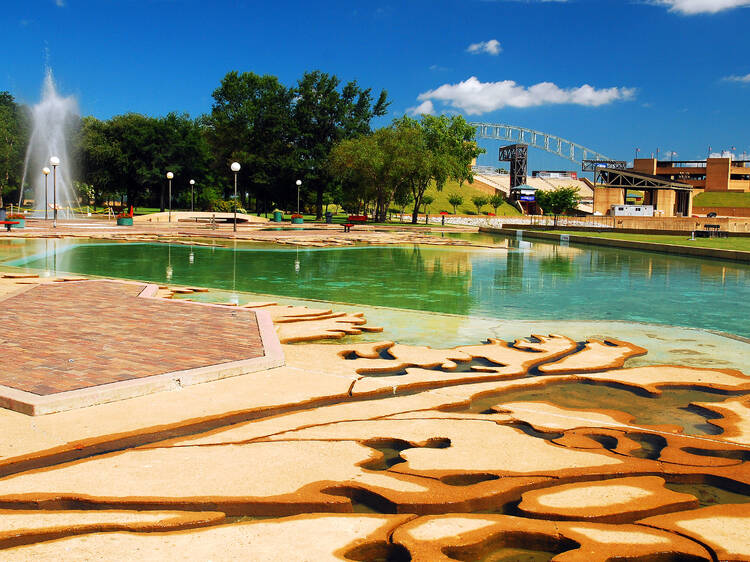 Mud Island Park is just a short walk away from downtown Memphis. To get here, walk the half-mile-long Skybridge, which offers optimal Mississippi River views. Perhaps the park’s best – and most notable – feature is the Riverwalk, a scale of the Mississippi from Illinois to Louisiana. Visitors can walk along it to pass six states in just about five city blocks. At the end of the Riverwalk, you’ll find the “Gulf of Mexico”—AKA a million-gallon pool—surrounded by city and water views. 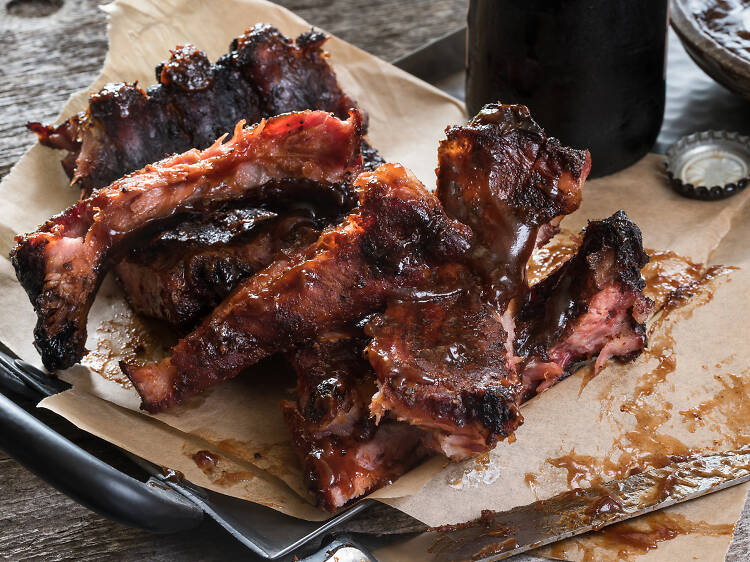 Foodies (more specifically, carnivores) should plan their trip in May to experience Memphis’ World Championship Barbecue Cooking Contest. The event has even been recognized by Guinness World Record as the "largest pork barbecue contest in the world.” As part of the four-day competition, teams compete in three different categories: whole hog, shoulder, and ribs. There are also other competitions for hot wings, sauce, and “anything but pork.”