In Miami, even going to the bathroom is a scene. Anyone who’s waited in line between three people in a stall at LIV or marveled at the in-toilet graffiti at Wood Tavern in Wynwood can attest to that. But those scenes happen mostly by accident, results mostly from the people who go to these Miami bars and clubs. Other spots around the city put a little more effort into their bathroom experience, offering designs, technological innovations, art and decorations that make using the bathroom as much an adventure as the food, drinks, or, in some cases, train rides north of the city. Here are 11 spots around Miami worth visiting for their bathrooms alone. 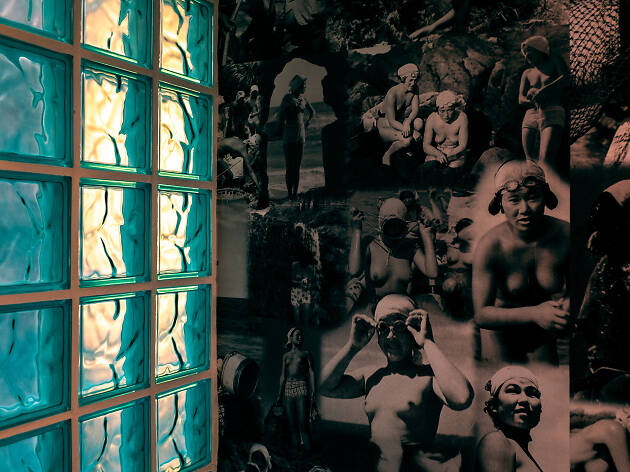 The bathroom walls in Brad Kilgore’s Japanese-inspired cocktail lounge pay tribute to Ama, the all-female Japanese pearl divers. Find them decked in diving masks, portholes and caged light bulbs, giving the feeling of being on an old pearl-diving ship, hopefully minus the seasickness.

Time Out tip: The bathrooms can only be accessed by guests to namesake AMA, Kaido’s backroom speakeasy, via a hidden door. 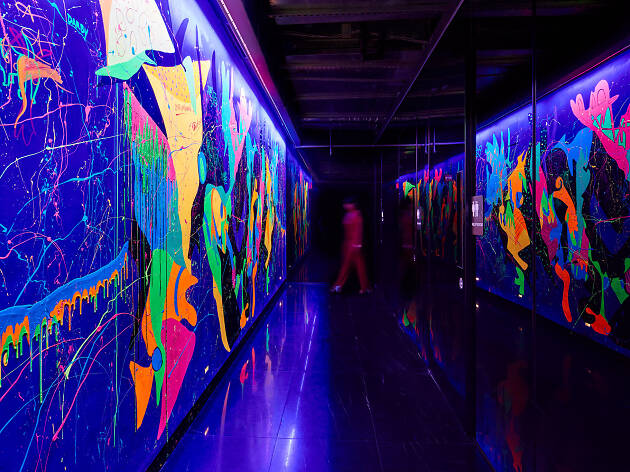 Open the heavy door to the hallway of stalls at Chotto Matte, and you’ll be greeted with a black-lit wall covered in graffiti and a soundtrack of pulsing house music. Inside the dark, lockable single stalls, you’re greeted with more neon, black light and a waist-level glass shelf. Then, somewhere off to your right is a sleek, black toilet. Still not quite sure what the toilet’s for...balance, maybe?

Time out tip: The food at Chotto Matte is amazing. So maybe wait to visit this bathroom until after you’ve eaten. 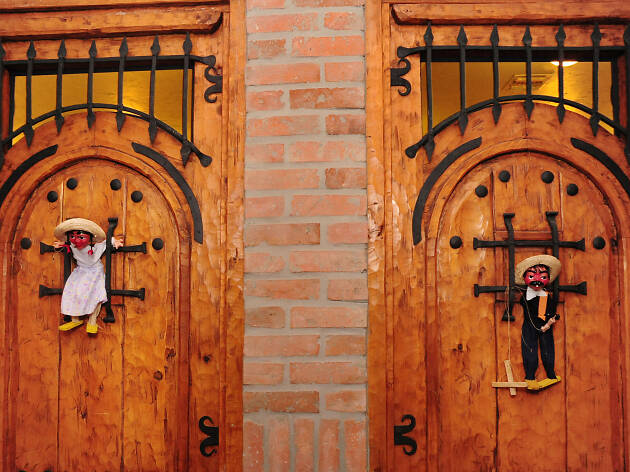 If going to the bathroom at this not-so-secret taqueria speakeasy makes you feel like walking into a chapel, there’s a reason: The tall doors that lead inside were actually salvaged from an abandoned Mexican church. The stained-glass windows help with the church-on-Friday motif, while the hand-painted sinks and toilets invoke classic old bathrooms in Mexico City.

Time Out tip: This bar isn’t obvious to find. You’ll need to take the back staircase at Taqueria El Mexicano on Calle Ocho, step into the “candy shop” and wait for the lady behind the counter to let you in. Yell “tequila!” and she’ll usher you in even faster. 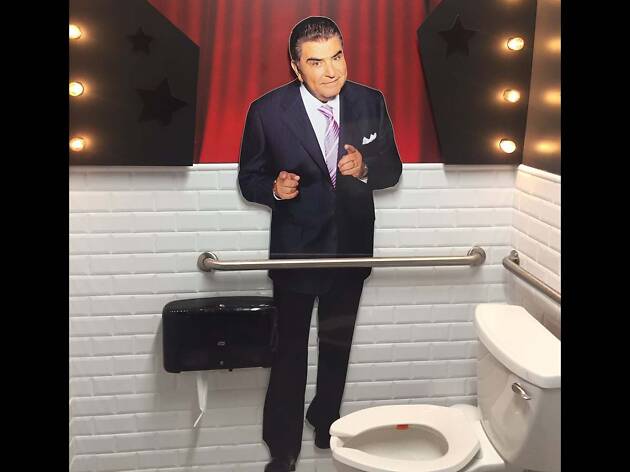 It’s probably not doing much for Justin Bieber's fragile mental state to know there’s a seafood restaurant in Miami where you can literally pee on his face. But that’s part of the draw at Spillover, where the men’s room has urinal cakes with The Biebs’ face right on it. In the ladies room, you can pee under the watchful eye of a life-size cutout of Latin American TV host Don Francisco.

Time out tip: The grinning faces on the men’s room wall might be familiar to fans of old-school Spanish-language sitcoms, but to those unfamiliar, they’re Chapulín Colorado and El Chavo, Mexican television stars of yesteryear. 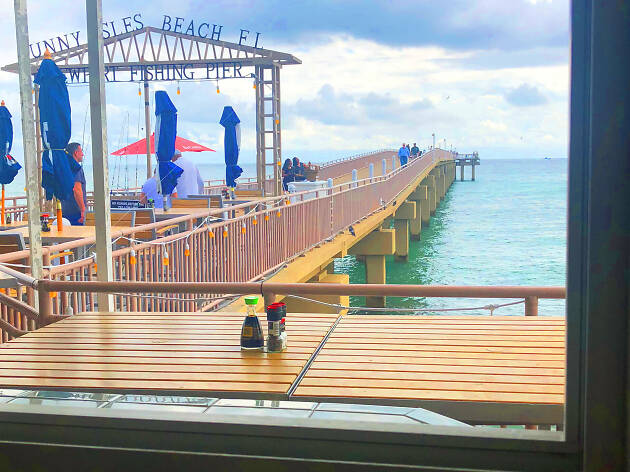 Time Out tip: Believe it or not, this is actually the only on-pier restaurant bathroom in Miami-Dade County. So take full advantage of the opportunity if you’re there. 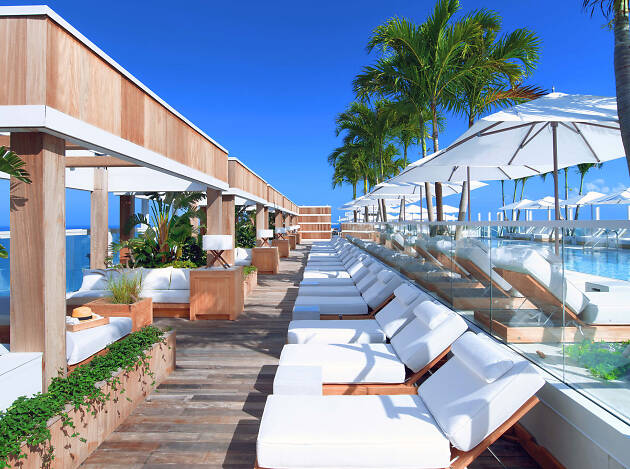 If an afternoon atop the 1 Hotel and its soft ocean breezes have you hesitating to go inside to do business in the stagnant air-conditioned lobby, no worries. Head just left of the doors to the elevators where the single-stall bathrooms are all outside with plenty of sunshine and tropical winds. But they’ve still got doors for privacy.

Time Out tip: Take a look around when you’re washing your hands and you’ll get a birds-eye view of the Atlantic Ocean to your left, and the stunning Miami skyline and Biscayne Bay to your right. 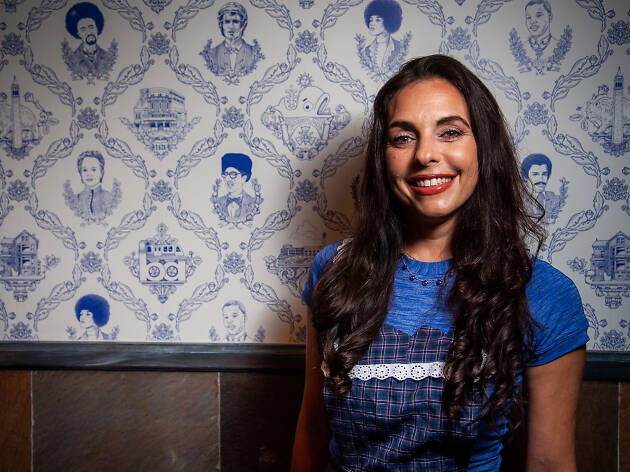 Though Miami is full of bathrooms with funky wallpaper done up in flamingos and palm trees, do any of them have cartoon drawings of the guys who did “The Humpty Dance?” No, they do not. Though it might be a little niche, the wallpaper in this North Bay Village taco shop is a tribute to the ’80s and ’90s East Bay Area in San Francisco, where owner Anna Robbins grew up. It features Jose Canseco and the Bash Brothers, BART, Digital Underground and other stuff nobody’s thought about since Bush senior was president.

Time Out tip: If you are more into checking out the bathrooms than eating tacos, head here at night when it turns into La Margarita Shop, a supper club with a live DJ and loads of agave spirits. 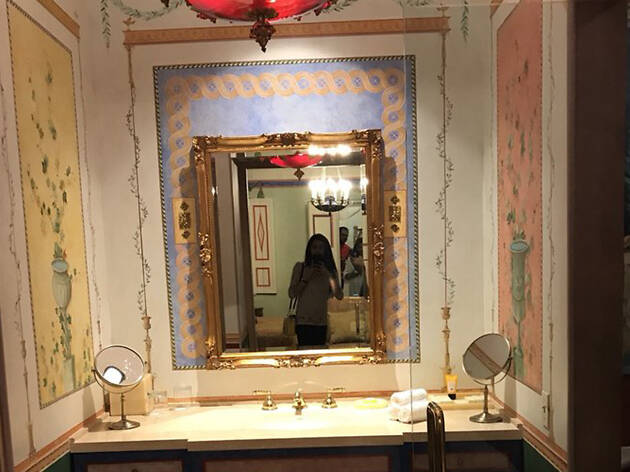 The cool bathrooms are a little inconvenient, forcing you to walk all the way down to the ground floor of the Versace mansion to the courtyard powder rooms. But once inside, you’ll instantly feel like a guest of the famous designer, where a plush sitting room outside the stall allows you to wait in classic Mediterranean luxury, imagining the parade of celebrities who probably did all kinds of nefarious things here in the 1990s.

Time out tip: If the stalls are full, wander across the courtyard to the Onyx bar, where you’ll continue the simulated ’90s party in what seems to have been Gianni’s private library. 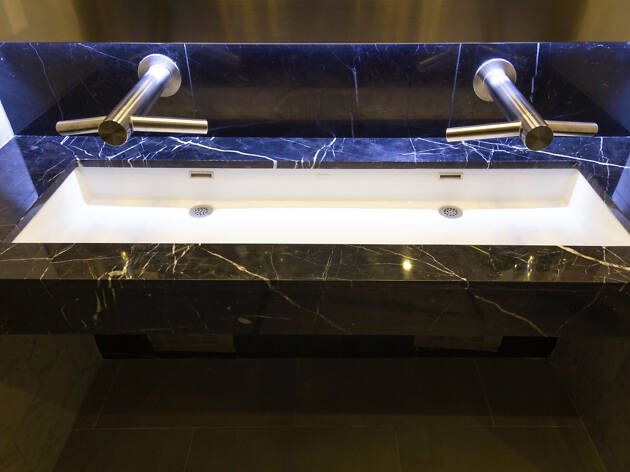 Long before you could wash and dry your hands with the same faucet on the Brightline there was Batch, the first bar in North America to feature sensor-operated, two-in-one faucets and hand-dryers. It also has a handy pedal on the door, allowing you to open it with your foot if you’re sketchy about touching handles. Plus, there’s also mouthwash in case the mac and cheese made your breath a little funky.

Time out tip: The lights in here are sensor operated, so don’t be freaked out if you’re in the middle of a long stall session and the lights go out. Similarly, don’t think the power’s out if it’s dark when you walk in. 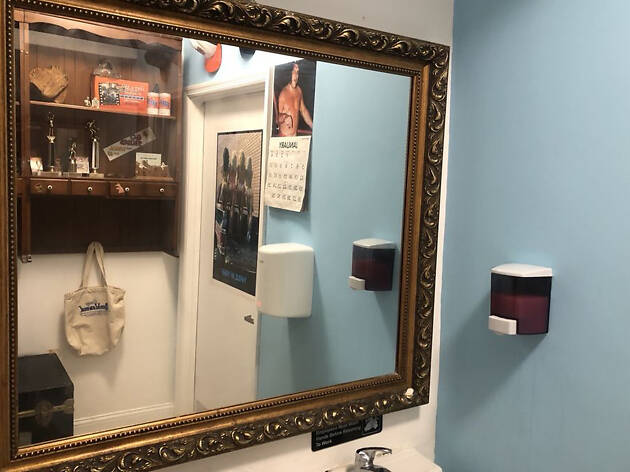 Keeping with its theme of a Xennial’s childhood home, the bathroom in this Coconut Grove milkshake bar has a WWF calendar on the wall from 1986, sports pendants from the mid-’80s, toys, dressers and wooden tennis rackets. Plus owner Matt Kuscher’s third-grade basketball jersey.

Time Out tip: Like any good bathroom from the 1980s, look around enough and you’ll find some old issues of Playboy. Just don’t spend too long in there or your mom will start knocking. 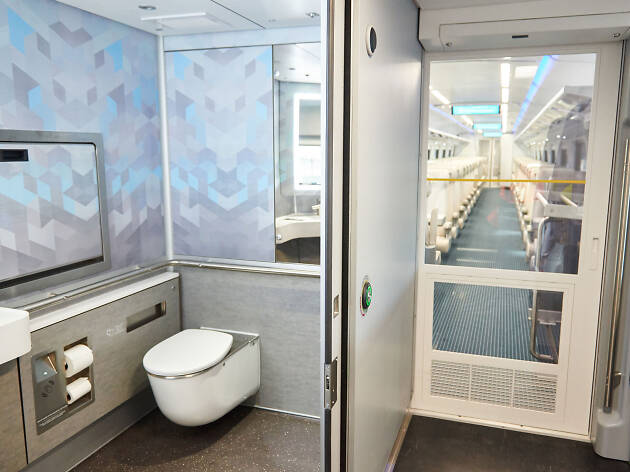 Those who’ve been to Europe might be familiar with giant, stainless steel train bathroom with touch-free everything. But for Americans, the bathrooms on Brightline are a first. Not only are they big enough to fit you and half a dozen of your closest friends, everything from opening the door to flushing to washing and drying your hands can be done without touching a single surface.

Time out tip: Gents, do yourself a favor and hold on to the bars next to the toilet if you’re going “number one.” Brightline is usually a smooth ride. But not every time.

More into cityscapes than toilets?